With 3.9 seconds left in the game, Syracuse faced a three-point deficit and had the ball beneath its own basket. The Orange had led the game since 17:11 in the first half but had proceeded to lose that lead in the final 13 seconds of the game.

Now, SU had to advance the ball all the way up the court and heave up a 3 with just 4 seconds. Out of the timeout, Cole Swider frantically looked for a teammate and eventually had to settle for a pass to Jimmy Boeheim on the right side. Jimmy quickly dribbled up the right side of the court and threw up a 3-pointer that hit the front of the rim and fell to the floor.

“He couldn’t get it to Buddy,” head coach Jim Boeheim said. “So he had to just get it up the court.”

The final buzzer not only signaled that Syracuse had lost a game it had led for 36 minutes and 58 seconds, but it also cemented the first regular season under .500 in Boeheim’s 46-year tenure.

For the first time since the 1968-69 season, Syracuse (15-16, 9-11 Atlantic Coast) finished the regular season with more losses than wins, as the Orange lost 75-72 to Miami (22-9, 14-6 ACC) in the final seconds. The Orange played with a lead for almost the entire game, but a plethora of errors against Miami’s press has placed this iteration of Boeheim’s team into the history books for all the wrong reasons.

“We lost the game because we couldn’t get the ball up the court. That’s embarrassing,” Boeheim said. “It shouldn’t happen, but we are not good against pressure.”

It began with one minute left in the game and SU playing with a five-point lead. The Orange were set to inbound from under their own basket, and they called a timeout after Swider couldn’t find a passing option. Out of the timeout, Swider again looked for a pass and eventually had to throw it to Frank Anselem in the corner. But Anselem couldn’t control the pass, and Miami’s Charlie Moore jumped in to force the jump ball and gain possession for the Hurricanes.

With possession back in Miami’s hands, Kameron McGusty scored to make it a three-point game. Again, SU was back to inbounding the ball, and this time got it to Joe Girard III. The point guard made his way up the court, but right as he neared midcourt, Girard dribbled the ball off his leg and out of bounds.

Miami regained possession and inbounded the ball to Moore, who quickly shot a 3-pointer. The shot missed, but Jordan Miller was there to grab the rebound and score to make it a one-point game. Again Syracuse had to inbound, and this time Swider got it to Buddy Boeheim, who then passed it back to him. As Swider neared midcourt, he turned his back to protect the ball, but Moore snatched the steal, forcing Buddy to foul instead of giving up the free layup. 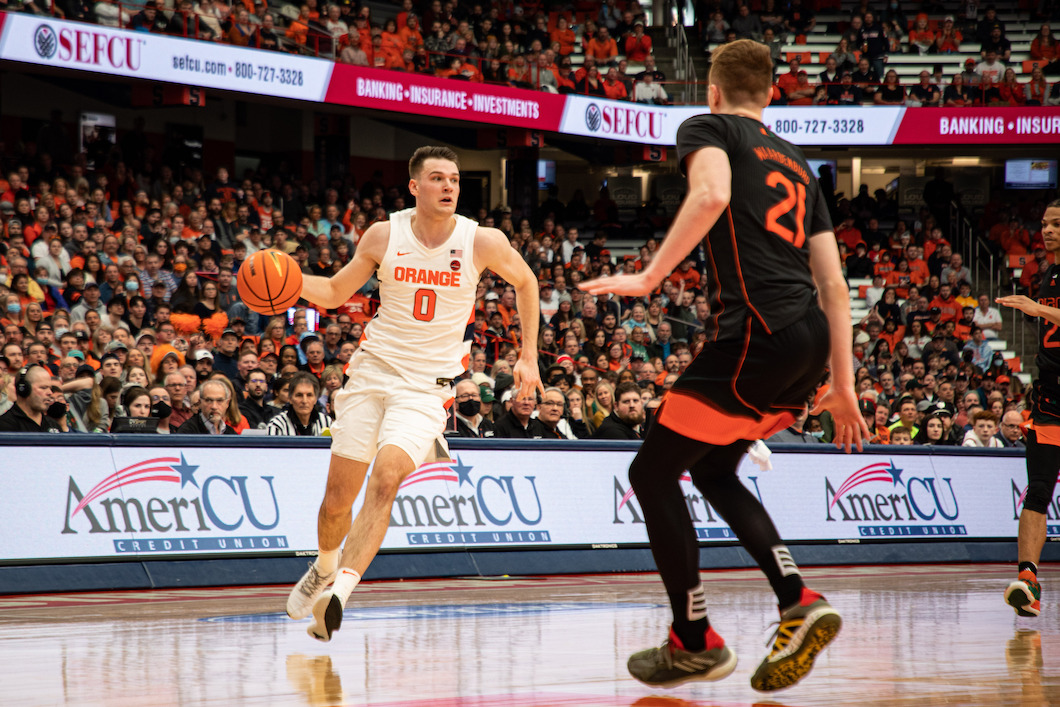 Jimmy Boeheim missed the game-tying 3-pointer at the buzzer, cementing another loss for the Orange. Trent Kaplan | Staff Photographer

With 25 seconds left in the game, Moore headed to the free-throw line for a one-and-one. The guard had a chance to tie the game at 72, but his shot missed and bounced into the air. The Orange couldn’t grab the rebound, and instead, Miller grabbed the loose ball and converted the putback to give the Hurricanes their first lead since the opening three minutes of the game.

On their fourth try at inbounding the ball in the final minute, the Orange finally were able to cross half court. But a potential go-ahead jumper from Girard bounced off the front of the rim, and Jimmy fouled Miller trying to get the offensive rebound to send Miller to the line again. Miller made both his free throws to give Miami a three-point lead with 3.9 seconds remaining.

The lead would be enough as Jimmy’s 3 fell short to hand SU another deflating loss in a season full of them. The Orange lost to Miami earlier this season because of a season-high 19 turnovers, lost to Wake Forest after failing to inbound the ball and lost to North Carolina after another failed inbounds play, and on Saturday, they couldn’t’ find an answer for Miami’s press.

“It’s just closing out games. You can’t keep losing games like that and saying, ‘We could be this and that.’ You’ve got to win the game,” Buddy said. “Especially when you’re up seven or eight with two minutes left.”

The Orange led by as many as 18 in the second half, but yet again, found a way to blow the game. It’s a theme that’s weighed the Orange down as Boeheim and his team have completed the worst regular-season of his tenure.

“I don’t care what our record is, what the game is, whatever, this one hurts,” Buddy said. “It (hurts) because we were beating them the whole game. We played better (than) them.”

The post Syracuse blows lead, finishes regular season below .500 with 75-72 loss to Miami appeared first on The Daily Orange.