When Sydney O’Hara was applying to colleges, she wanted to attend Syracuse no matter what. A softball star at Cicero-North Syracuse High School and a lifelong Syracuse fan, O’Hara received a scholarship to attend her dream school and hometown team.

Even after graduating from SU, O’Hara tried to stay on with the team as a graduate assistant – a position the team didn’t have. So she spent a year as the pitching coach at neighboring Le Moyne before moving to Binghamton for a three-year stint as the Bearcats’ pitching coach.

Just four years removed from the school where her name fills the record books, O’Hara is back at Syracuse as the team’s pitching coach. She is responsible for improving a young pitching staff that currently has the worst ERA in the Atlantic Coast Conference and ranked in the bottom third last season. As a player, she became the first in program history to earn multiple first-team All-ACC selections and the third to be named an All-American. O’Hara pitched the seventh no-hitter in Syracuse history as a freshman, hit four home runs in a game as a senior and holds the all-time program record for career saves.

O’Hara led C-NS to an undefeated season and a Class AA state title in her senior season and was named the New York State Gatorade Player of the Year. After enrolling at Syracuse, O’Hara became one of the team’s most indispensable players at the plate and the pitcher’s circle in her freshman season, finishing second on the team in batting average and first in ERA among those who pitched at least 20 innings.

During O’Hara’s junior season, freshman Andrea Bombace said she was drawn to O’Hara’s work ethic and saw her as a mentor. The next season, freshman Alexa Romero said O’Hara took her “under her wing.” Roughly 1,600 miles from home, Romero was unfamiliar with the Syracuse area at first, but O’Hara showed her around, introducing her to spots on campus like People’s Place and Slocum Cafe. 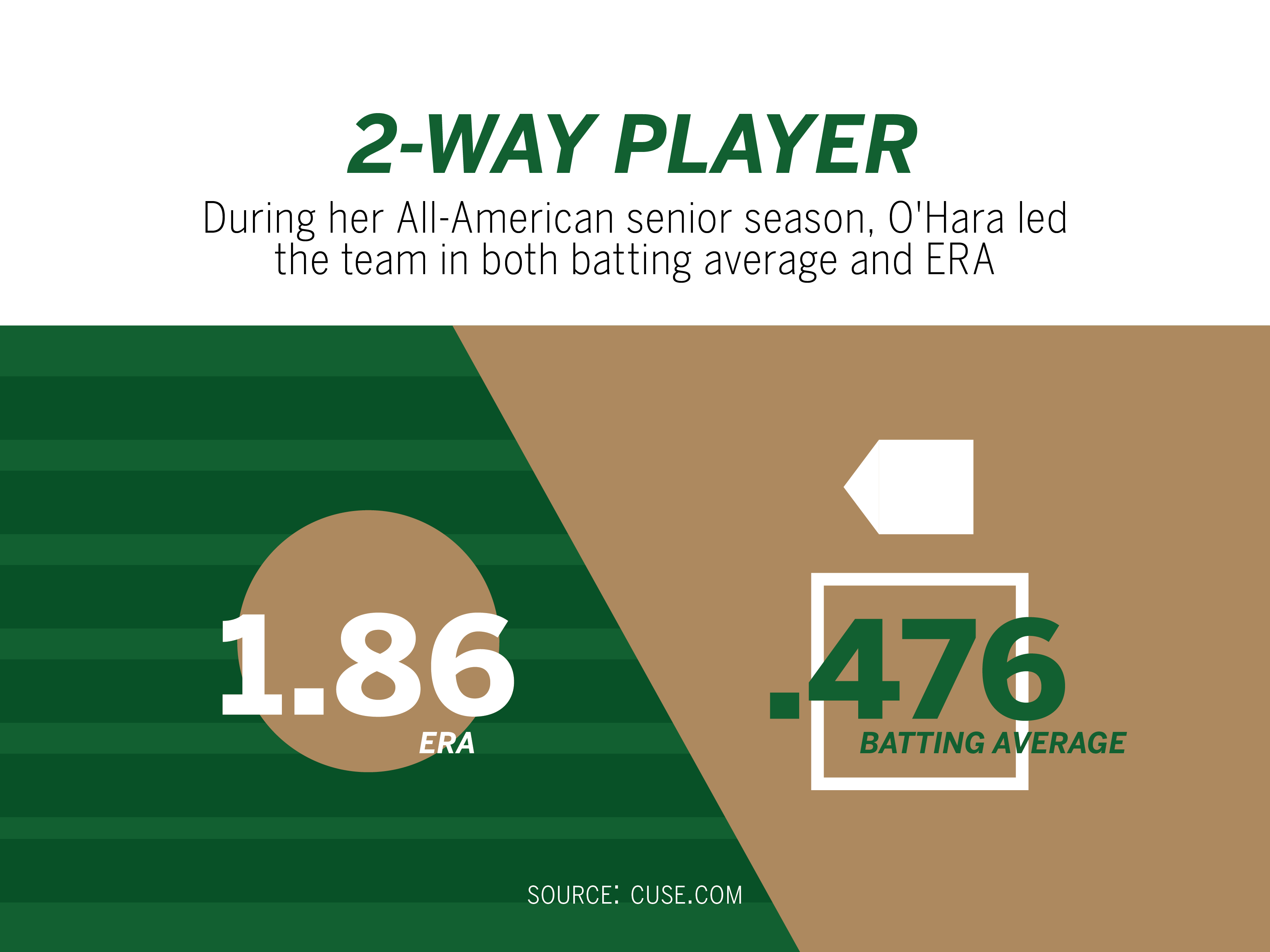 Romero, who graduated last season, said she tried to mentor the underclassmen in her final season at Syracuse in the same way O’Hara did for her. O’Hara convinced Romero of the importance of the mental aspect of pitching, which Romero now uses as a fundamental part of her coaching as a graduate assistant at Regis University.

While O’Hara worked at Le Moyne, she assisted with pitching workouts in and out of practice, introduced new strength and conditioning methods and even served as the head coach for a game when then-head coach Jason Marino was ejected.

Marino said O’Hara instantly received the respect of the players because of her local ties. Much of the team had played with or against O’Hara at some point, and just one year out of college, she could relate to the players and difficulties they were having.

Alexis Eastman said O’Hara helped her significantly with setting up batters, pitch calling and confidence. O’Hara drew from her hitting knowledge to help Eastman attack hitters as a pitcher, Eastman said. And with the help from O’Hara, Eastman was named first-team all-conference after being a second-team selection the two years prior.

Marino said many of his previous assistants would simply show up and run through drills with the players, but O’Hara put in conscious effort to relate to the players and help them improve.

“You can have all the knowledge in the world but if you can’t relate to kids and figure out ways to motivate them you’re not going to be a very good coach,” Marino said.

After a year at Le Moyne, O’Hara moved to Binghamton, where she served as the pitching coach for three seasons. Current head coach Jess Bump, who served as an assistant coach with her for three seasons, said that O’Hara’s mark on this year’s team is indelible.

“Something she got really good at was learning our different pitchers and how they needed to be communicated with, how they mentally worked through things and also working with their confidence,” Bump said.

Some of the pitchers were visual learners, so O’Hara would put her cleats on, go to the mound and show them what adjustments to make, rather than just telling them, Bump said.

O’Hara was a part-time coach at Binghamton and resigned after three seasons due to financial reasons, she said. She applied for positions at several ACC schools before getting a call from head coach Shannon Doepking asking her to interview for the empty pitching coach position at Syracuse.

Since arriving, O’Hara has focused on introducing players to the Syracuse area. On the field, she said she has primarily focused with her pitchers on spin, location and developing consistent mechanics. Off it, she created a scavenger hunt for her players earlier in the season and has been teaching them about the university and the city itself.

“I’m trying to get them to love Syracuse as much as I do,” O’Hara said.

The post Sydney O’Hara returns to Syracuse to mentor next generation of SU pitchers appeared first on The Daily Orange.