So Tuesday night, when the Orange halted a three-game losing skid with a 77-61 win over Pittsburgh, it was the defense that fueled a second-half push, Boeheim said.

“Our offense has been good all year — it’s our defense that was good,” Boeheim said. “That was the difference.”

In a matchup between two of the conference’s worst teams — both Pittsburgh and Syracuse entered the game among four ACC teams with overall losing records — the Orange prevailed. Syracuse (8-8, 2-3 Atlantic Coast) climbed back to .500, leaning on Buddy Boeheim’s 24 points, a 24-11 run out of halftime and improved defense. Pittsburgh (6-10, 1-4 ACC), on the other hand, struggled to score beyond the free-throw line in the second half, drawing fouls but failing to convert from the field.

KenPom projected an 11-point win for Syracuse and gave the Orange an 83% chance of victory. Yet SU made it more difficult in the first half when it conceded a 13-0 run. The Orange struck back and led by one at halftime, but Boeheim said afterward that if it wasn’t for Buddy’s four consecutive 3-pointers in the first half, SU could’ve trailed by 10 or 12 points.

Syracuse’s defense — particularly center Jesse Edwards — held Pitt’s top scorer John Hugley to eight points, six of which came from the free-throw line. The unit held Pitt without a field goal for the first nine minutes of the second half (Pitt started 0-of-8 from the field). The Orange were “more active” in trapping Pitt in the corners and closing down shots, Boeheim said.

And in the end, Boeheim’s team leaned on its defense to pull away in the second frame for a much-needed win.

“They may not be a good shooting team, but you give people open shots, they’re going to make them. If you contest them a little bit, then they’re going to miss, so hopefully we’ll learn from this,” Boeheim said.

Boeheim did criticize the first-half defense: he said Edwards “was not in it,” SU wasn’t covering shooters, and it was conceding easy buckets inside. “It’s why we’ve struggled this year,” Boeheim said. 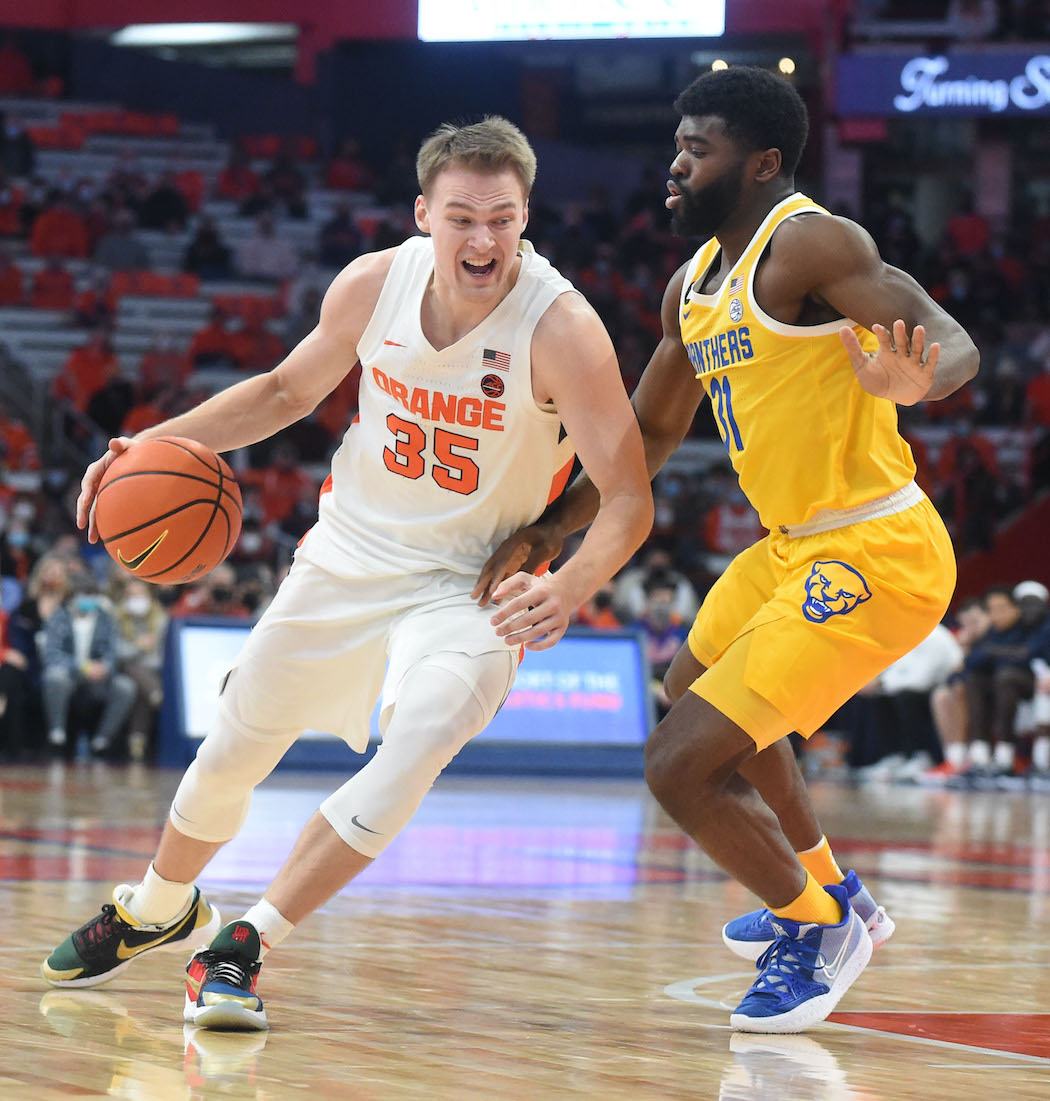 Buddy Boeheim’s four 3-pointers in the first half helped Syracuse to a one-point lead at halftime. Courtesy of Dennis Nett | Syracuse.com

Edwards didn’t pick up a first-half foul, which he said allowed him to be more aggressive guarding Hugley. Boeheim said Edwards was a completely different player in the second half on defense. Cole Swider said the Orange missed a few first-half rotations, and they cleaned those up after the break.

In the first half, Buddy went on a hot streak that kept SU in the game. He knocked down his first four 3-point attempts, only missing on a fifth attempt that rimmed in-and-out. His first make came with the score tied at 10-10, and he swished his shot in transition. He assisted a cutting Symir Torrence for an easy two, and then made his next two 3s, also in transition. Then on the final trifecta of his streak, he dished to Edwards, shuffled over a few steps, and then got the ball back for a make from the left side.

But Buddy’s first-half heroics were consistently answered by Pittsburgh, who chipped away at SU’s eight-point lead. Jamarius Burton hit a 3-pointer to pull within five and then got two more inside. The Panthers shot 7-of-8 during a scoring run and took the lead. Then Femi Odukale put a nifty move on an SU defender and finished an easy lefty-layup, and Boeheim was forced to call timeout.

Over the first 20 minutes, the Panthers drove inside continuously and converted 14 first-half points in the paint. They swished five 3-pointers, many of which came off open looks. Pittsburgh entered the game averaging 30.9% from beyond the arc — last in the conference — but shot 41.7% in the opening half.

Pittsburgh cooled down in the final minutes of the first half, and SU took the lead going into halftime when Frank Anselem missed an easy finish at the rim but Jimmy Boeheim was there for tip-in on the other side of the bucket.

But the Panthers failed to rediscover that rhythm from their 13-0 run in the first half after the break. They were 2-of-10 from deep in the second half, and SU could’ve held Pitt without any 3s 3 had substitute Nate Santos not knocked down two difficult shots, Boeheim said. Buddy, Torrence and Joe Girard III all stopped allowing drives in the lane like they had in the first half. Pittsburgh drew 20 total fouls and knocked down 15-of-20 second-half free throws, but it wasn’t enough.

That’s what allowed Syracuse’s offense to take advantage. The Orange led by 10 points at the first media timeout of the second frame. Girard drove inside, Edwards caught an interior pass from Buddy and finished through contact, and Buddy drove to earn two free throws (he made both).

The Orange turned that into a 14-1 run of their own. Syracuse wasn’t flawless on offense, but it was enough to secure the win. SU held onto its double-digit lead, something it’s failed to do on other occasions this season, and looked in control all the way down the stretch.

“The second half was the best that we’ve really played all year, by quite a lot,” Boeheim said. “We just got to keep working at it.”