Syracuse’s first play of the 2020 season was a handoff to freshman Jawhar Jordan. North Carolina’s defensive. line stopped the now-starting running back, shoving him to the ground for no gain.

If 2020 was a typical year, Jordan would’ve seen limited playing time. But that’s not the case: SU’s top two running backs, Abdul Adams and Jarveon Howard, have opted out. And yet, if the Orange’s completed game is a sign of what’s to come, a college football season will be played.

Syracuse’s 31-6 loss to No. 18 UNC followed an offseason defined by testing for coronavirus and mixing in new offensive and defensive coordinators with limited practice time. Syracuse never maximized its 3-3-5 defense’s performance, turning three first-half takeaways into only six points. The team averaged just 2.8 yards per play. Poorly timed penalties, dropped catches and missed blocking assignments were the theme as SU failed to step into the end zone since the September 2019 loss to Clemson.

“It’s hard on a defense to play that many plays,” Babers said. “We have to score points so we can take that pressure off the defense.”

The road to the game was arduous for both teams. SU players sat out three practices, demanding more COVID-19 testing across the board in the ACC. North Carolina paused team activities twice, once for an outbreak within the team and once for a rise in cases on campus.

DeVito completed just 50% of his passes in the first 30 minutes, often throwing the ball away or taking sacks as Carlos Vettorello and Chris Elmore struggled to keep the UNC defensive line in check. Top receiver Taj Harris at one point failed to beat a linebacker one-on-one in coverage, and the junior receiver totaled five catches on 15 targets but dropped passes as the offensive line failed to create a running room for Jordan.

Still, the Tar Heels gifted the Orange opportunities. Mikel Jones intercepted a deflected pass on UNC’s second possession, leading to a failed fourth-down conversion. All-ACC wide receiver Dazz Newsome dropped a punt, and Aaron Bolinsky jumped on it early on in the second quarter. After barely moving the ball in first quarter, SU was within 25 yards of taking the lead.

On the second play of the drive, DeVito looked to his right side, finding a wide-open Sharod Johnson in the corner of the end zone. The ball fell right in front of his arms but through his hands, smacking the light blue turf in the end zone. After a third-down run, Andre Szmyt knocked in a field goal — making up all of Syracuse’s points in the opening half. 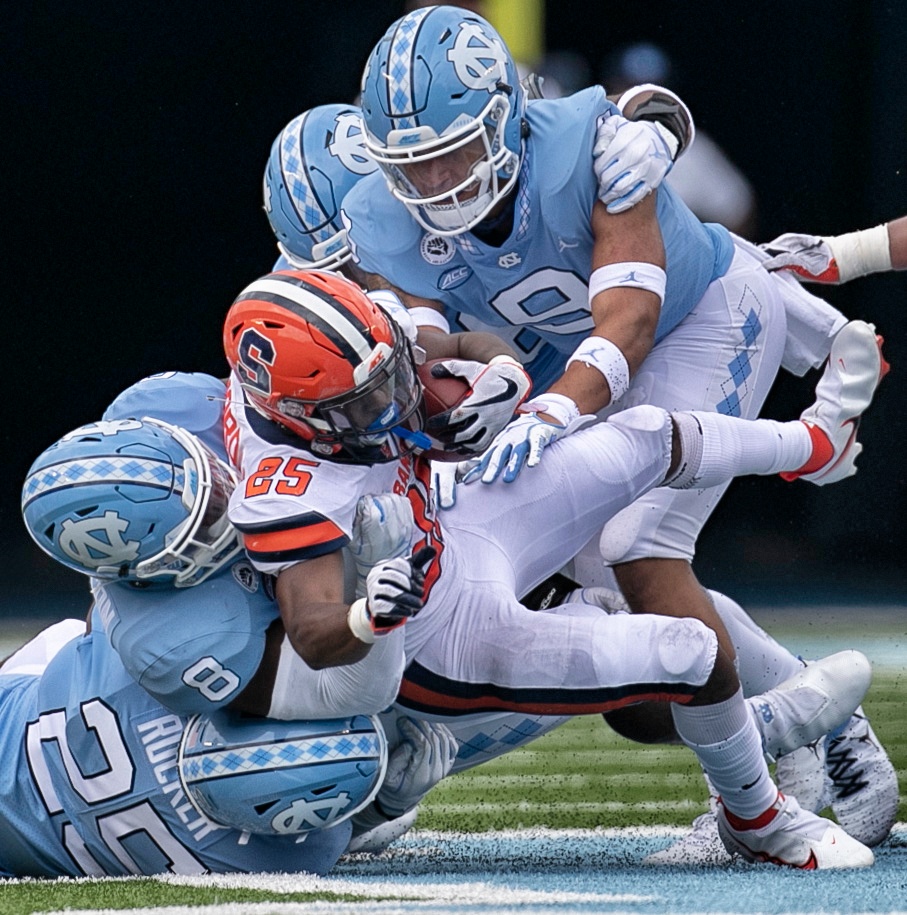 Jawhar Jordan was limited to 27 yards on 14 carries, and the Orange only totaled 68 net rushing yards against the Tar Heels. Courtesy of the ACC

Syracuse is a young team that’s adjusting to two new coordinators during an offseason unlike any other. The depth chart is spattered with eight underclassmen starting across offense and defense. Of the 69 players who traveled, 29 were redshirt or true freshmen.

Players have routinely applauded offensive coordinator Sterlin Gilbert and defensive coordinator Tony White for implementing their philosophies in the “Zoom era,” Babers said. Learning a new offense when practices are limited and players are in pods until the start of training camp puts a strain on what the offense can do in the first few weeks.

Until then, Syracuse may have to rely on its defense as it did for three quarters Saturday. Jonathan and fellow senior Josh Black dominated the line of scrimmage, constantly hurrying Howell and forcing him into rushed throws.

And then, on the Tar Heels’ first drive of the third quarter, junior Andre Cisco shined. Howell misfired again, this time trying to drop in a deep ball to Newsome. Cisco, sitting back in a deep-lying safety role, sprinted across the hash marks and jumped in front to notch his FBS-leading 13th interception of his career. Syracuse had a possession starting on North Carolina’s side of the field and a chance to take the lead.

Led by back-to-back DeVito runs, Syracuse entered inside the 10-yard line and new offensive coordinator Sterlin Gilbert called two straight runs. Jordan was stuffed both times, and on the next play, DeVito missed a wide-open Aaron Hackett across the middle, instead taking a sack.

DeVito jogged off the field as Szmyt jogged on. Syracuse, once again, left points on the table.

“Sterlin’s extremely aggressive, and I’m okay with that,” Babers said. “In that aggressiveness, we had opportunities to make plays.”

Down the stretch, the offense’s inability to stay on the field started to affect the defense. The Orange had three straight three-and-outs after Szmyt’s field goal cut the lead to one point in the quarter. Their defense began reverting back to 2019 ways, allowing big play after big play as the defensive line pressure halted and the physicality from the corners was suddenly nonexistent. In the first five and a half minutes of the fourth quarter, Syracuse allowed three touchdowns, and the lead ballooned from four to 25.

At the end of the game, Babers moved quickly, simply waving to UNC head coach and friend Mack Brown instead of stopping for conversation. The Orange will leave Kenan Memorial Stadium and fly back to New York, avoiding the state’s quarantine laws by spending less than 24 hours in North Carolina.

Despite the season being one of unpredictability and fluctuation, Babers is just happy to be on the field.

The post SU’s offense sputters in 31-6 loss to UNC after offseason of instability appeared first on The Daily Orange.