Twins Jack and Nolan Willis are part of a growing movement to make esports more accessible for people with disabilities. It’s a movement that strives to be as inclusive as the Paralympics, Nolan said. The pair, both of whom use wheelchairs, joined SU’s Overwatch team last fall. Since, their vision of making gaming more accessible has intensified.

Surrounding themselves virtually with other esports enthusiasts, Jack and Nolan mainly competed from their home in Fayetteville last year. The year before, they upgraded to iBUYPOWER Gaming Desktop computers, allowing them to compete with teammates on campus. Though they are currently taking a semester off, they said the experience exposed them to a new social situation.

“Having only met one of my teammates in-person, everyone else on the team had no idea I was even disabled. It never came up in conversation, and we didn’t do much in-person,” Nolan said. ”It was interesting. It raises the question of would they treat me differently? And if they did, is that good or bad?”

Today, many games aren’t manufactured with people with disabilities in mind, Alexander Nathan, the founder of Permastunned Gaming, said. Nathan, who has a muscular disability, is looking to change that. In January 2019, he established a staff consisting solely of people with disabilities to bridge a gap between video games and competitive esports, two industries which often get intertwined but are independent.

To Nathan and his team, fighting for a more inclusive gaming industry means constantly streaming on various platforms, establishing community between players with disabilities — as well as players without disabilities — and helping one another gain access to esports.

According to a 2018 study from University of York researchers with 230 esports players with disabilities, there are still issues with “control mechanisms,” and mainstream games may not be “entirely accessible,” though players still play despite this.

When playing any games on my computer, with a few clicks of my mouse, I’m doing what I want to do. I don’t have to think about my lack of ability to access it.

Creating more, higher-level tournaments and making more computers available to people should be a priority for the industry, Jack said. Esports should be embraced because of how empowering they can be for people with disabilities, he said.

“I think it means allowing people with disabilities to have the same amount of agency over all aspects of things in life as do other, non-disabled people,” Jack said. “When playing any games on my computer, with a few clicks of my mouse, I’m doing what I want to do. I don’t have to think about my lack of ability to access it.”

Gaming gives Jack, Nolan and others with disabilities a sense of freedom and independence they don’t experience much, the brothers said. 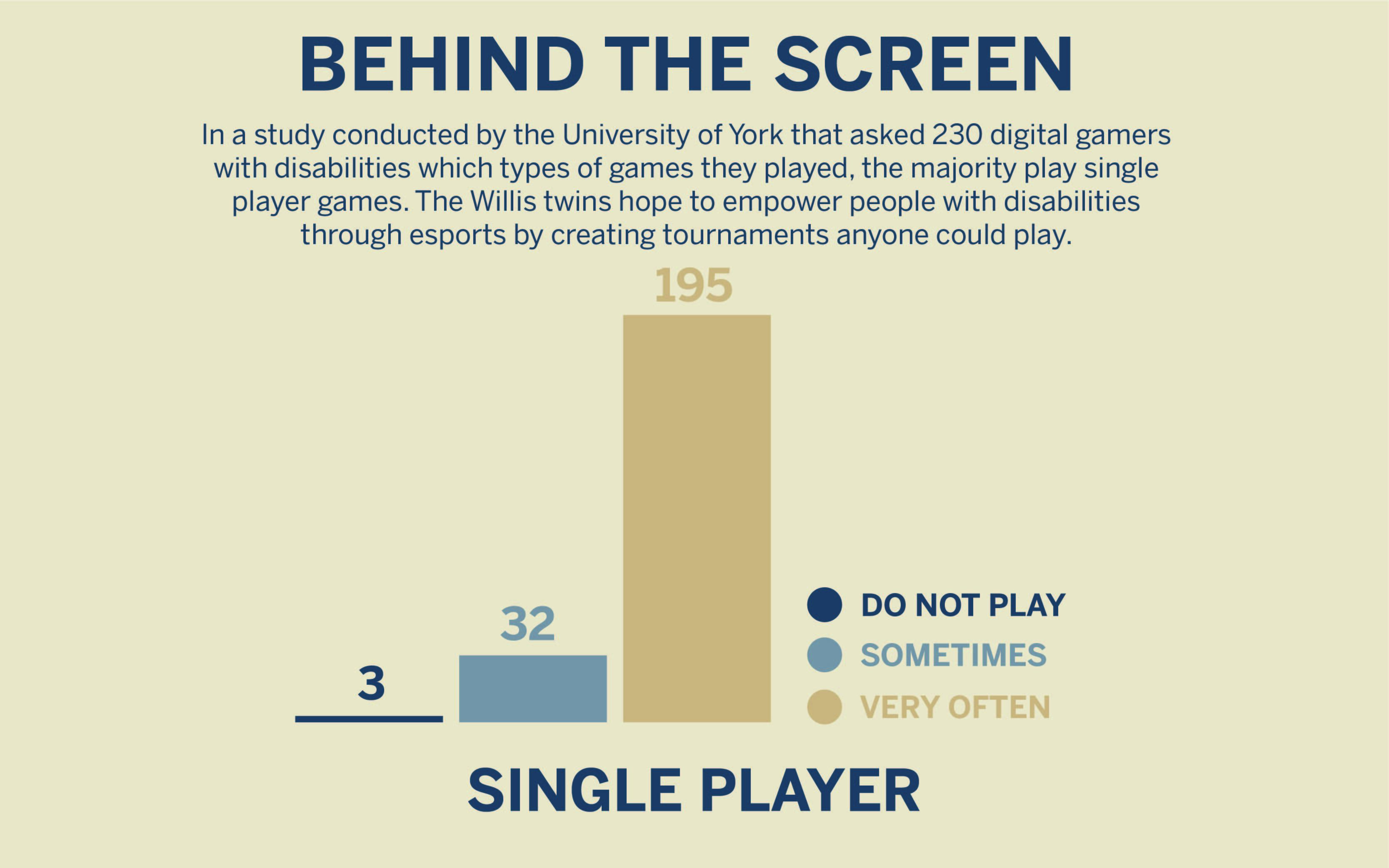 Robert Hilsky, a user experience and accessibility expert at Jarvus Innovations, said he applies his knowledge about the physical accessibility of buildings to esports.

Similar to how some accessibility activists think about ramps and handrails on buildings, he thinks about the things that ordinary users and developers wouldn’t consider, he said. Hilsky thinks about how people with disabilities can use the senses they have to participate in esports and constantly envisions a more inclusive industry.

“Look at standardized tools for (people with disabilities) we have now: captions on video, eyeglasses, wheelchairs. There was a time when these tools were new, and it only took time for them to be normalized in the general public,” Hilsky said. “We are only at the beginning here for accessibility features in games.”

While many games have accessibility features buried in their settings, Fortnite has been a frontrunner in the movement, Hilsky said. Epic Games implemented a “sound circle” in Fortnite for deaf players. The “sound circle” is a visual ring around the user’s crosshair to visually display key audio cues, like footsteps and gunshots. EA Sports has extra similar audio cues in Madden NFL, where players have the option to assign different sounds to different plays. 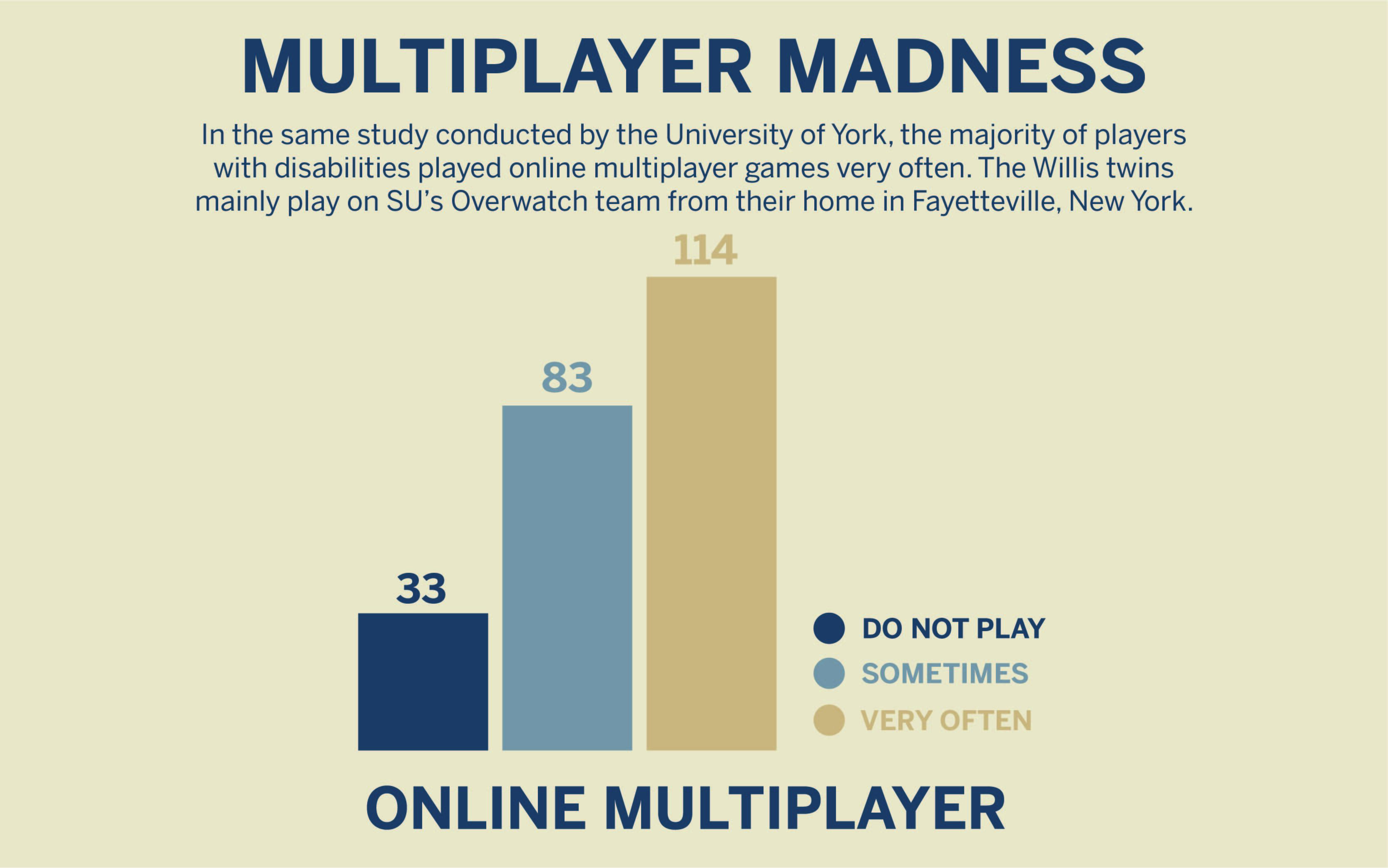 Moving forward, it’s important developers realize they can make gaming a more accessible industry by simply using the technology they already have, Nathan said. Once the industry makes that jump, it will be far more inclusive, he said.

For some with physical disabilities, esports are the only sport they can play professionally, Nolan said. The competition requires minimal physical ability, he said, and it can be a transformative experience.

“I think it has massive potential,” Nolan said.

The post SU twins among those making esports accessible for people with disabilities appeared first on The Daily Orange.