The final play of Syracuse’s season — a four-yard run by Cooper Lutz as the final seconds drained off the clock — was merely a formality in finalizing the worst Orange season in at least 15 years.

It won’t be remembered after the game or after the season.

But Lutz’s short gain brought his yard count into the triple digits, making him the second running back all season to cross the century mark against No. 2 Notre Dame’s defense in 2020. The other was Sean Tucker, his teammate. He eclipsed 100 rushing yards earlier in the quarter.

While Syracuse head coach Dino Babers said the Orange made mistakes all season because of their inexperience and lack of practice time, Babers didn’t need to excuse the performances of his backfield on Saturday. Both Tucker and Lutz ran through holes and made some of their own. Tucker broke off a 40-yard touchdown run. Lutz took a 2nd-and-9 carry 80 yards to the end zone. In the end, Syracuse (1-10, 1-9 Atlantic Coast) faded going into halftime and lost 45-21 to No. 2 Notre Dame (10-0, 9-0) in South Bend, Indiana. But the Orange had their best rushing game of the season.

In a season full of non-memorable moments, injuries and opt-outs, Syracuse’s top two running backs finished one of the worst seasons in program history with their best games. They began the year fifth and sixth on the depth chart.

Tucker, a true freshman from Maryland, didn’t arrive until after the rest of the returning players were in Syracuse for summer practice. He came late with the rest of the freshmen. By week three, he was the starter, running for 112 yards in the Orange’s lone win against Georgia Tech. And on Saturday, against one of the nation’s strongest defenses, Tucker totaled 113 yards.

One of the best runs of his young career came when he followed a Chris Elmore block through the hole before cutting up the field. What looked like a modest gain became much more, as he had open field to use his track speed and burst into the end zone.

“Sean’s been steady all year long,” Babers said. “That one run he had was really, really good. He made one guy miss, cut back inside the corner, jumped over No. 20, the safety, and I’m sure 14 was around somewhere, and then he outran 14 to the end zone.” 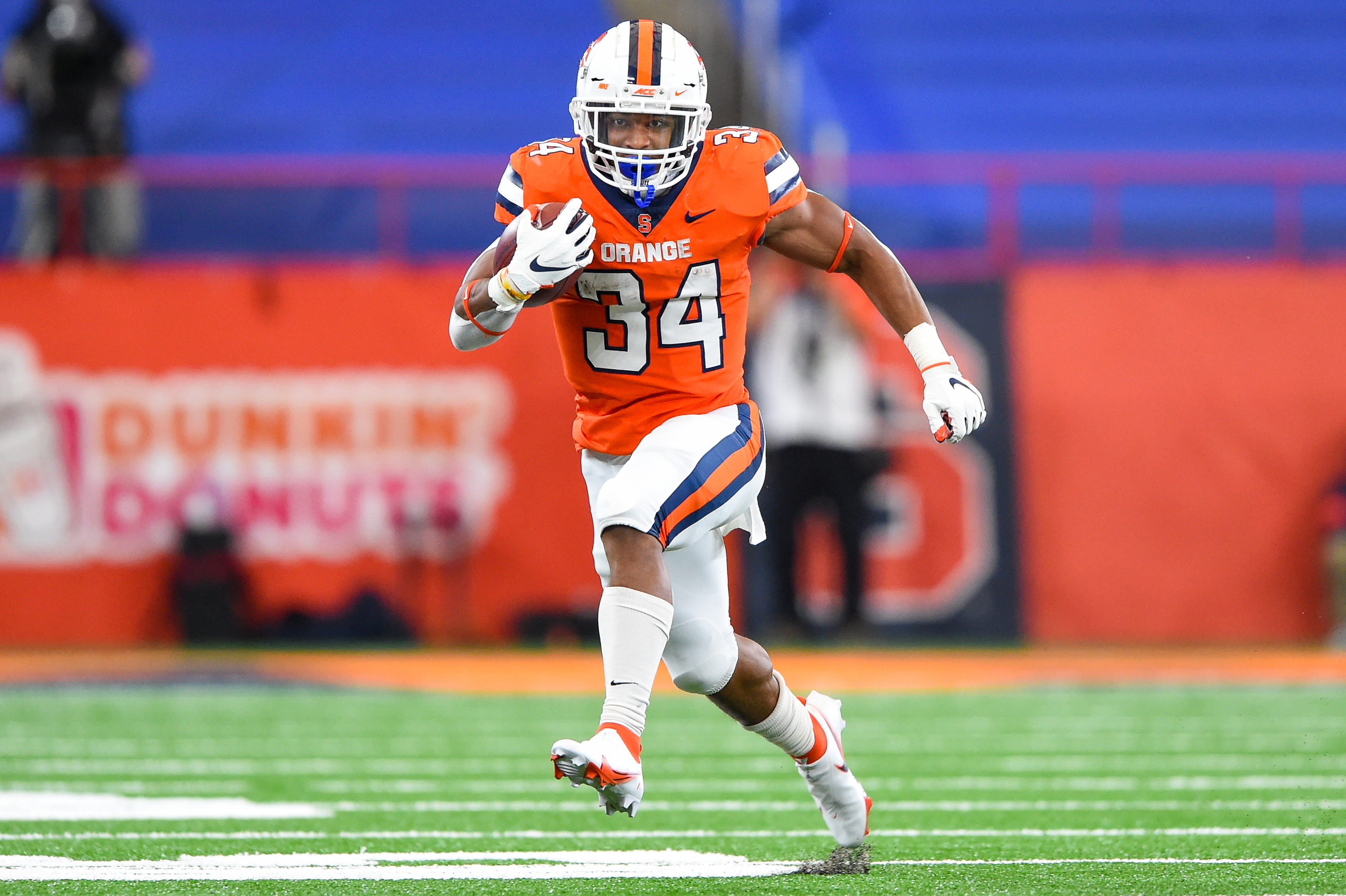 Sean Tucker was the first running back to total over 100 yards against Notre Dame in 2020. Courtesy of Rich Barnes, USA Today

Tucker appeared to be stopped for a gain of at most a yard during one run in the third quarter. Syracuse’s offensive linemen pushed the pile from behind, and Tucker kept his legs moving. One yard became nine.

Lutz redshirted in 2018 and played wide receiver in 2019. Babers asked him if he could move to running back after the Orange’s top two running backs, Abdul Adams and Jarveon Howard, opted-out of the 2020 season.

Lutz only had six carries, but one of them was a run off the right tackle that he turned up the field, and he outran everyone into the end zone for an 80 yard score. The game was long decided by then — Notre Dame led 45-14 — but he caught the safety on a bad angle, unable to catch up once he was committed too close to the line of scrimmage.

“I thought he was really good, but I didn’t know he was that fast,” Babers said of Lutz.

Neither of these backs may have ever seen the field if not for the opt-outs during the Orange’s training camp.

Even without Adams and Howard, neither Tucker nor Lutz made the Orange’s first depth chart to open the season in North Carolina. But by season’s end, Tucker and Lutz were the top two running backs.

Syracuse has had to turn to youth everywhere on the field because of injuries and lacking numbers. The Orange started six freshmen in their back eight on defense. And the defense held Notre Dame to three points in the opening 25 minutes of Saturday’s eventual defeat.

At quarterback, Babers has talked about his players needing more time and experience to be ready. He’s said the same of the offensive line. But the same learning curve hasn’t been applied to Lutz or Tucker. For them, it’s all praise.

“I’m excited to see it,” Babers said. “Both of those guys, last time I checked, have four years left.”

While the Orange’s defense has improved across the board in 2020, SU’s offense has faded from the highs it reached in 2018 all the way down to its current resting place. The least-efficient offense in the ACC. The third-worst third-down offense in Division I FBS football. A team unable to block effectively to run the ball consistently.

But on Saturday, the rushing game provided a glimpse of what the Orange’s offense could be. The games with a fast-paced offense that had an efficient running game may have been two long years ago, but the Orange’s 229 rush yards against an elite defense show what it could be.

For now, though, it’s only what could be. As Babers said postgame, the Orange’s record shows what they are now.

“I understand what it is,” Babers said of the Orange’s record. “It will be with me for the rest of my life.”

The post SU running backs have career day in loss to Notre Dame appeared first on The Daily Orange.