Dino Babers’ forced decision to move former fullback and tight end Chris Elmore to left guard before the first game of the season signaled just how little depth Syracuse had at the position.

A lingering preseason foot injury for Dakota Davis threw Elmore into a position he hadn’t even played in high school. His first two opponents were two teams that began the year in the Associated Press Top 25, North Carolina and Pittsburgh.

Eight games into the season, Elmore grades out as the best offensive linemen on the Orange this year, based on Pro Football Focus’s positional grades. He’s allowed the fewest pressures among Syracuse’s five regular starters.

“The guy is a fighter,” Babers said after September’s Pittsburgh loss. “If you watch the tape, he’s competing with very, very big people, and he’s doing extremely well.”

The Orange’s five-man offensive line featuring Elmore, Airon Servais, Carlos Vettorello, Darius Tisdale and Matthew Bergeron has improved slightly as the season has progressed. But the Orange rank 104th out of 126 teams in pass blocking grades and 116th out of 126 in run blocking, according to PFF’s positional grades. For the past two seasons, Syracuse’s offense has fallen from the highs it reached in 2018. There are other issues with the offense, but it starts with the five up front who haven’t held up.

An offense that carried the Orange to a 10-win season in 2018 is now one of the least effective in the entire country. Looking at points, success rate, line yards or PFF grades, SU hasn’t been able to execute consistently on offense.

Their ineffectiveness has led to multiple quarterback injuries within the past two seasons, with Tommy DeVito, Clayton Welch and Rex Culpepper all taking hit after hit, and, eventually, picking up injuries. Now, Babers had the second bye week to try and improve his offensive line ahead of the final three games against Louisville, North Carolina State and No. 2 Notre Dame.

“There has been improvement this season, but I think when you add up the overall numbers, it puts us at the bottom,” Babers said. “We understand that. We had a really rough beginning. Sometimes it’s hard to overcome huge numbers like that.” 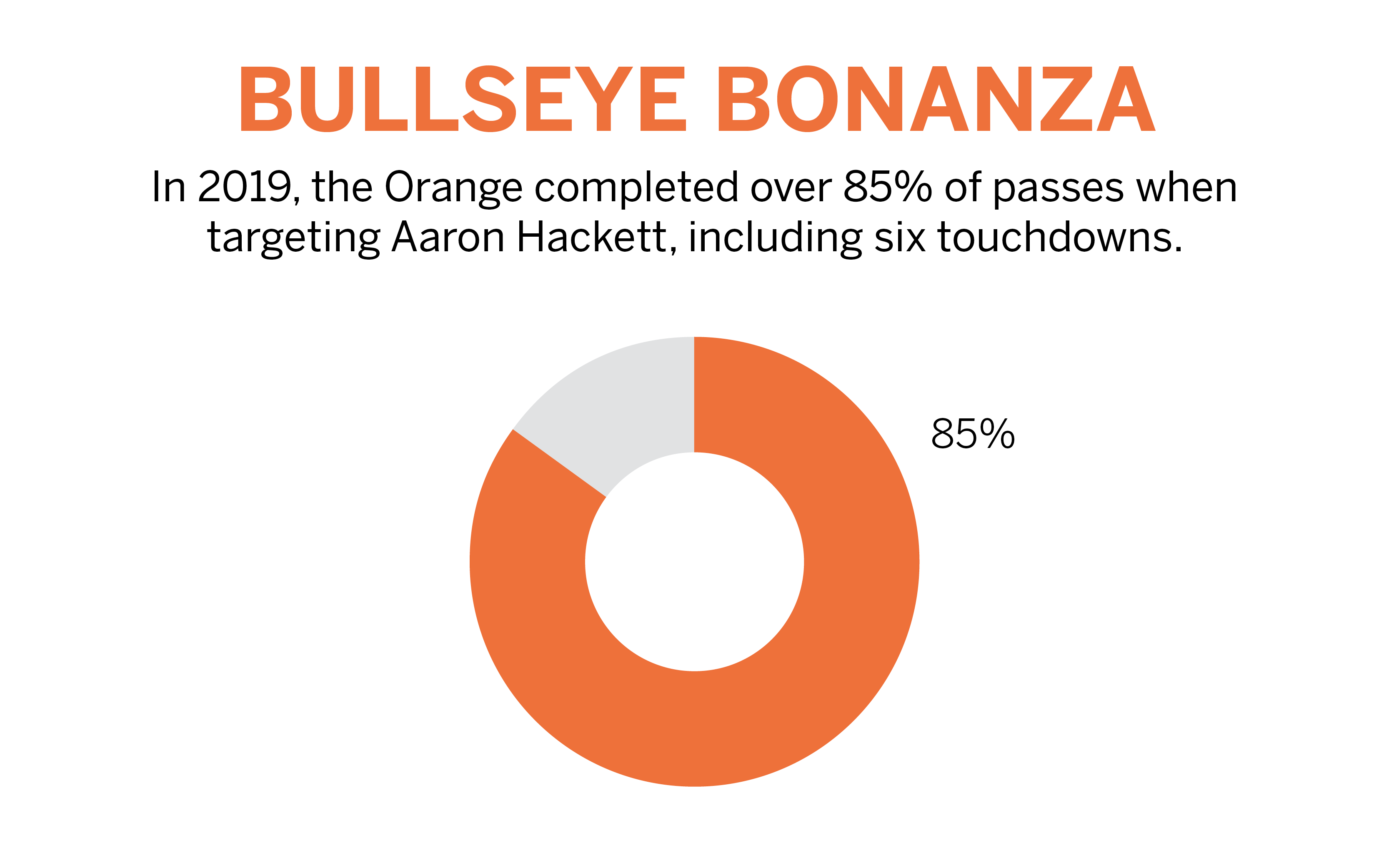 Last year, the Orange came roaring out of their bye week with three games to go, dominating Duke in their most complete performance of the season. SU ran for 286 yards after true freshman Matthew Bergeron replaced Ryan Alexander on the offensive line. Alexander later left the program midway through the season, and Syracuse kept its five-man lineman rotation for the final three games.

It was three of the Orange’s best games of the year offensively. Syracuse posted 49, 34 and 39 points en route to two wins. The Orange’s yards per rush were much improved in those final three games, and their offensive line yards also ticked up.

This year’s poor play has been a continuation of 2019. Injuries have decimated any hopes the Orange had of building depth along the offensive line. Former lineman Sam Heckel announced his retirement from football due to an undisclosed injury last fall. Anthony Red, who was expected to compete for a potential role in the line, tore his Achilles tendon.

Babers tried to address the lack of depth through the transfer portal, by adding lineman Chris Bleich, a transfer from Florida, but his waiver for 2020 eligibility was denied.

Davis has worked his way back into the rotation in the Orange’s last loss to Boston College before the bye week. He’s played every third series as he works his way back to fitness.

Airon Servais didn’t directly say it, but suggested he was playing through some type of injury in October. Babers swapped Bergeron with Servais along the line and moved Servais to right tackle ahead of the Duke game.

Injuries have piled up at quarterback, too. DeVito played a stretch of last season through a rib injury. Clayton Welch said he played through a broken collarbone in the Pittsburgh game. This season, DeVito was hurt escaping the pocket, and Culpepper missed the Boston College game due to an undisclosed injury.

Two games into the season, DeVito was on track to be sacked more than any quarterback in a single season in Football Bowl Subdivision history. The Orange had completely failed to establish the run. Babers thought it would get better, and it did, if only for one breakout performance against Georgia Tech by freshman running back Sean Tucker. DeVito was sacked only once.

Encouraging offensive line performances against Liberty and Clemson were sandwiched between poor ones against Duke and Wake Forest.

Wide receiver Nykeim Johnson hinted at it earlier this season, but the Babers’ offensive system and pace is reliant on early down success. The Orange haven’t been able to play fast because they’ve had too many negative plays on first down. When they can’t run the ball on early downs, it is impossible to gain an edge through the lack of huddling.

The Orange’s offensive line woes are reflected in the 2019 and 2020 passing data. In 2018, when the Orange had a more effective offensive line, Eric Dungey was able to push the ball further down the field. 28.8% of Dungey’s passes traveled more than 10 yards in the air, and 36% of DeVito’s did, according to PFF’s passing metrics.

Many expected tight ends to be a bigger part of the 2020 passing attack because of their efficiency numbers in 2019, especially in the red zone. Hackett had 27 targets in 2019, and the Orange were 23 for 27 with six TDs when targeting him. In 2020, he’s had only 10 targets because he’s been stuck in the backfield blocking more to protect the line.

When he was asked on Monday, Babers said that he believes his offensive line has shown improvement. With three weeks left in the year, they have a chance to prove that.

The Orange are coming out of a bye after a loss to Boston College with three games remaining, and will be underdogs in all three games. Just like last year.

“We’ve got three opportunities against three teams where we won’t be favored,” Babers said. “We’ll see where the chips fall. Maybe we can pull one out down the stretch.”