Adopting social distancing measures has been a challenge for the Syracuse marching band, which includes about 180 members. To safely practice, the band is following the COVID-19 protocols set by the National Federation of State High School Associations, which include at least six feet of distance and required performance activity masks.

So far, the band has reported one case of COVID-19, but Timothy Diem, the band’s director, said he is confident the measures in place provide the best way forward. In the days following the positive test result, the band transitioned to virtual practices as the university did contact tracing. They have since returned to in-person practices, doubling down on their original protocols.

“We feel our protocols are solid and we will continue to be diligent on and off the field about following them so that we all have a safe and productive semester,” Diem said.

To begin the semester, Diem and other leaders split the band into five separate groups to allow for social distancing. Instead of practicing as a single unit, there are three groups of winds, one group of drumline and another of color guard. During each practice, members will be six to eight feet apart, compared to the usual grid where members are two to four feet apart.

Band members typically congregate at the Carrier Dome or on the steps outside Hendricks Chapel for practices. With construction at the Dome and the difficulties of social distancing at Hendricks, the band now rehearses at Skytop athletic field. Still, the nature of marching bands makes social distancing difficult, Diem said.

“These are your colleagues, your closest friends. From the time you begin marching in high school, drill sets of shoulder-to-shoulder or two-step intervals (are) normal,” he said. “Concert arcs in close quarters, also the norm. In the stands and around the field, being shoulder to shoulder and interacting in tight groups is typical. Now we need to be cognizant of spacing.” 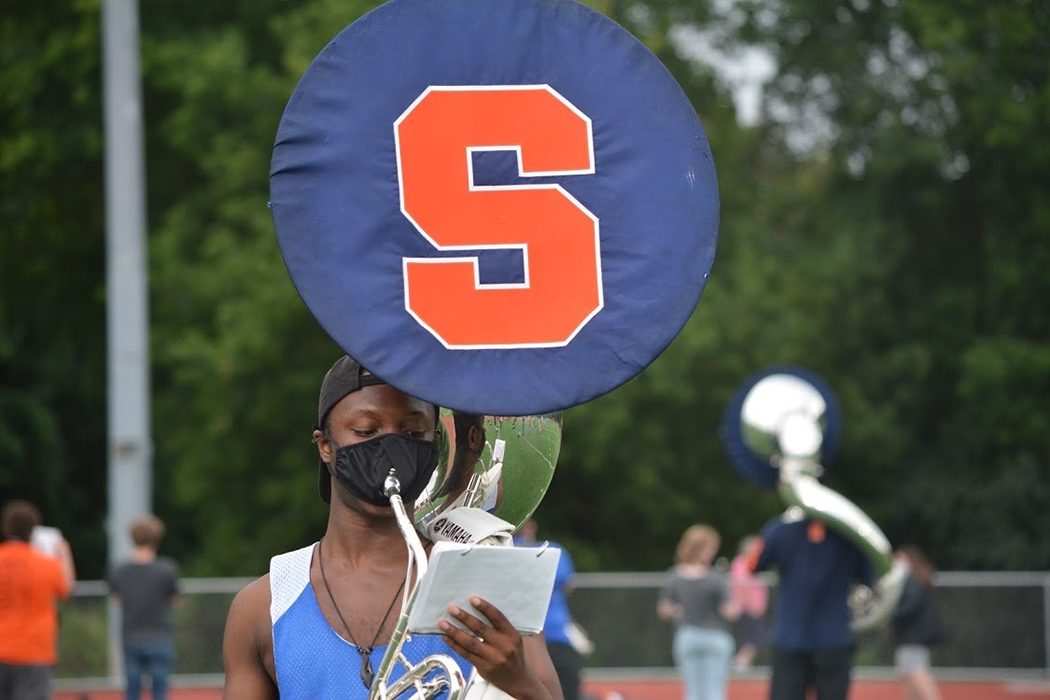 Practicing outdoors isn’t the same as in the Carrier Dome, SU marching band secretary Josh Arndt said, because of how the sound floats away instead of lingering in the air. Courtesy of Heide Ottley

Josh Arndt, the marching band’s secretary, said the increased space between members could be both a positive and a negative for the band. As the band has grown, members have envisioned a more spacious environment, he said, but now that they are spread out, they are realizing the challenges of having additional room.

Because there are smaller groups, the “wall of sound” that the SU community has become accustomed to at Hendricks Chapel won’t be there, Diem said. Arndt said band members may take time to get used to the new environment.

“Our sound will be a lot less loud, that’s for sure. Overall, though, I think it’ll be alright,” Arndt said. “We have enough of every instrument where we can still have a balanced band with only a third of our members. It’ll be closer to pep band than marching band in terms of sound.”

When the band plays inside the Dome, the sound is much louder and echoes for a few seconds. Hearing the sound linger is rewarding, Arndt said.

Practicing in more open environments takes those vibrations away. The sound floats into the air during outdoor practices, seemingly evaporating. With unpredictable and potentially wet weather in the future, an inconsistent practice schedule could be a storyline for the season, he said.

However, Diem said these safety measures create a safe environment for practice.

The band has also shortened practice times to a maximum of 90 minutes and lowered the temperature for indoor practices with small groups. Keeping the musicians from sweating has been a key focus in planning, Diem said. When people sweat, they are tempted to touch their faces, which can spread COVID-19. The band has also eliminated its traditional orange and blue wool uniforms to keep body temperatures lower.

Margaret Strehle, one of the band’s music directors, said the band will need additional motivation from time-to-time.

“The biggest challenge for the band in general will be keeping up momentum and enthusiasm when the basketball season is so up in the air,” she said.

The band will have Zoom meetings and socially-distanced activities to foster community growth and welcome new members. Band members have found themselves more united now than ever, Arndt added.

If fall sports are canceled, the marching band will still practice. Diem said the plan for no sports consists of learning to play different music, like songs from Stevie Wonder, and familiarizing band members with various instruments and equipment. They will also record their work to share with the SU community.

If there is extended time without sports, Diem said, the band will explore different marching bands throughout the world, work on team dynamics and improve as musicians.