Five months after graduating, Christina Oyawale was working at the front desk of a Planet Fitness and coaching youth volleyball on the side in Virginia. She then received a phone call from an old SU teammate, Sam Clarey, recommending Oyawale apply for the assistant coach position at Clarkson University.

After helping the Orange to their first NCAA Tournament appearance in 2018, Oyawale joined Clarkson head coach and SU alumna Carol LaMarche in Potsdam, New York. In her first year as a coach, she helped guide the Golden Knights to a district championship and an Elite Eight appearance in the NCAA Division III tournament, all while pursuing her master’s degree at Clarkson in English education.

Oyawale arrived at Syracuse in 2014, but redshirted her freshman year. A self-described “project kid,” she needed time to adjust to the speed of Division I volleyball. Track was always her primary focus throughout high school, and she only focused on volleyball full-time when she arrived at SU.

“Me coming from Maryland versus someone coming from Texas, I would essentially be playing backyard volleyball,” Oyawale said. “It’s just not as intense and heavy in Maryland.”

The learning curve was big, and Oyawale admits that, early on, there were days where she thought she wasn’t good enough to be on the team. She constantly asked her teammates questions.

Despite a handful of minor injuries during her redshirt freshman and sophomore seasons, Oyawale was a starting blocker by her junior season.

During her senior campaign, Oyawale helped the Orange sweep Yale in the first round of the NCAA tournament, before being swept by No. 8 Penn State. After Oyawale ended the year with 36 kills and 27 blocks, she aimed to play professionally overseas. She never put much thought into coaching, she said.

Oyawale decided to pursue collegiate coaching after she received Clarey’s phone call and interviewed for the assistant coach position with LaMarche. The Golden Knights have won seven of the last eight Liberty League championships during LaMarche’s tenure.

LaMarche understood the transition Oyawale was making. After playing for the Orange from 1998 to 2001, LaMarche played one season in France before returning to coach at SUNY Canton, Syracuse and ultimately Clarkson.

When Oyawale arrived, she took over training for the Golden Knight’s front-row defense. She wasn’t just helping with the physical side of the sport but also demanded more accountability from her players.

“She brought that intensity and focus that the team needed and was ready for and really helped push the girls to push themselves to become better,” LaMarche said. “It was a huge part of why we did so well last year.” 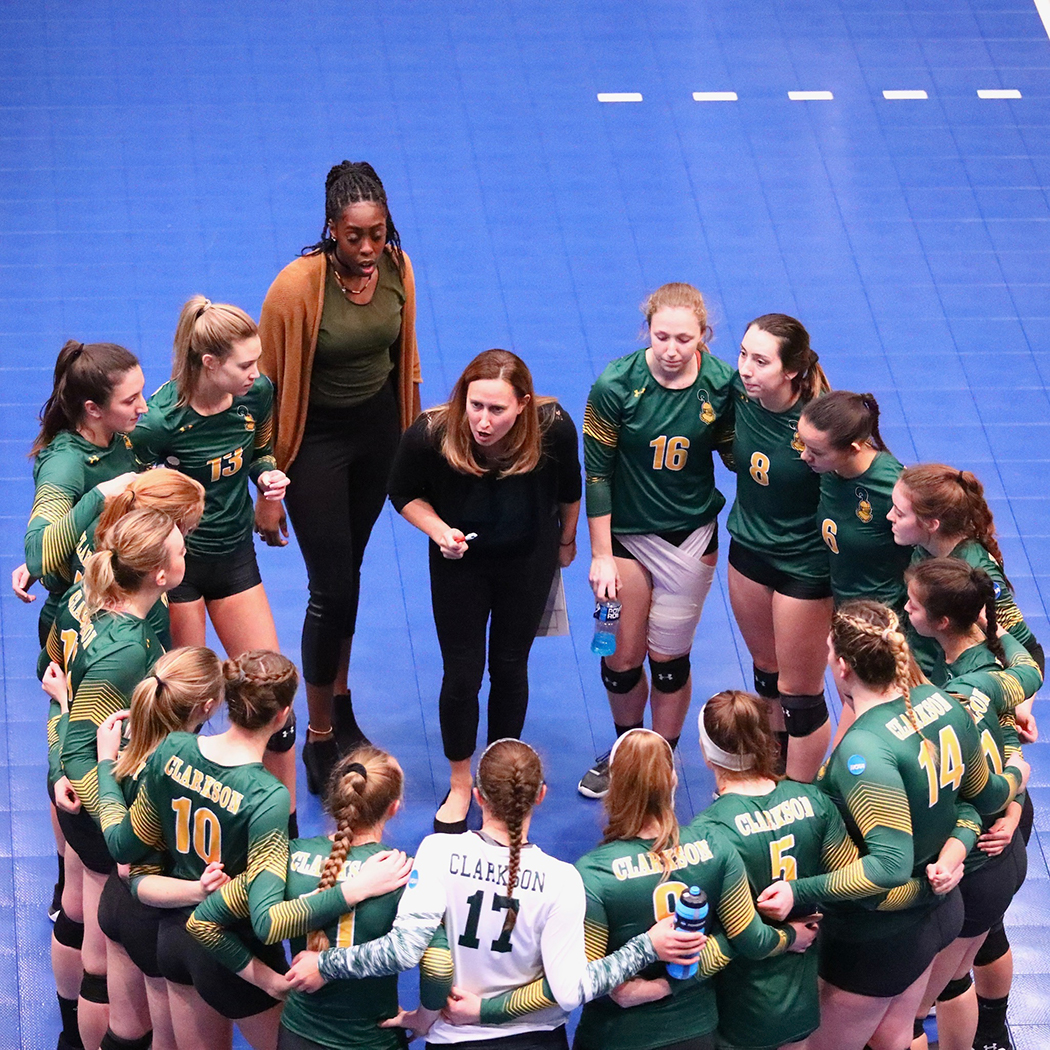 Oyawale didn’t plan on going into coaching after graduating from SU. Courtesy of Oliver Liu

In Oyawale’s first season with the team, the Golden Knights went 28-6 (6-1 Liberty League), including 20 wins where they didn’t drop a set. Clarkson rolled through the Potsdam regional tournament, eliminating Westfield State University, Wellesley College and Ithaca College before its championship run was ended by No. 1 Emory in the Elite Eight of the NCAA Division III tournament.

Oyawale and Clarkson will have to wait an extra year to one-up last year’s success after the  Liberty League canceled all fall sports on July 22. Still, LaMarche was impressed with the transition Oyawale made and the energy she added to the program.

“It’s a different rush because I can’t physically help them win, but I can guide them,” Oyawale said. “When you see them excel or win a game, or take something they learned the day before, and they execute it, seeing their face, their excitement that they’ve accomplished something — that is the rush.”