Throughout the first 12 seasons at Syracuse, head coach Ian McIntyre has consistently relayed the same message to his squad: get SU back on the “big boy table.”

He’s referring to the elite group of Division I soccer programs the Orange have occasionally grazed during those seasons, but they lack consistency — a trend that they ultimately carried into the 2021 season.

Despite Syracuse (6-5-1, 1-3-0 Atlantic Coast) recording its best 12-game start to the season since 2018, it’s the team’s fifth-worst record in that amount of games during McIntyre’s tenure with the Orange. As five regular season matches remain — four of which are ACC games — the Orange’s mixed results have made this stretch extremely valuable in the grand scheme of their postseason expectations.

Here are the numbers that have defined each phase of play thus far:

Syracuse has recorded more shots on goal this season than it has during the opening 12 matches in the past five seasons. The Orange’s 81 shots on goal are 18 fewer than in 2015, where the Orange began the season 8-3-1 and made a run to the College Cup semifinals.

Despite shooting less than in 2015 — the season McIntyre introduced his 3-5-2 formation — Syracuse still ranks among the most high powered offenses in the country. Its 0.516 shooting accuracy is eighth-best in the country with the Syracuse shot on goal total ranking in the nation’s top 15.

The emergence of sophomore forward Deandre Kerr has guided the Orange offense this season. Despite missing three games due to injuries, Kerr has scored seven goals, tying him for 10th nationally in goals per game percentage at 0.78. After scoring four times in an abbreviated rookie season, Kerr became the forefront of SU’s striker duo, assuming much of the aerial, direct service McIntyre has implemented this season. 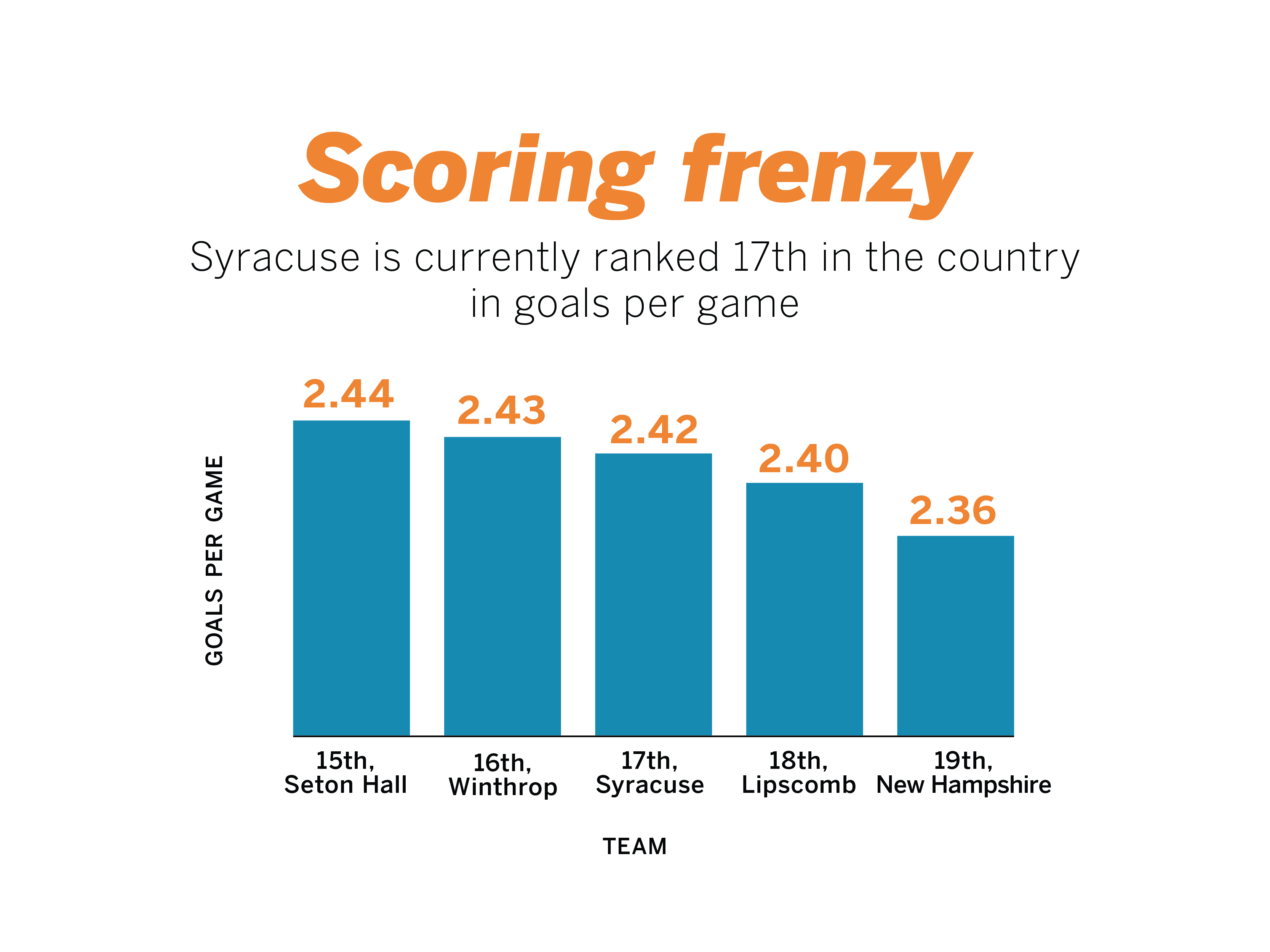 But it took him time to get quality chances at goal. Kerr had taken just six shots in SU’s first three games against Drexel, Penn State and Georgetown, and only two went on goal. It was a stretch where Syracuse scored just two goals, both coming in its opener against Drexel. Kerr then followed up the next four games with seven goals, a span that saw him score three consecutive braces and 15 shots on goal, including seven against
Niagara.

In Kerr’s absence, Syracuse was able to rely on a new wave of depth McIntyre said his team had been longing for the past couple years. Freshman midfielder Curt Calov and forward Francesco Pagano have scored a combined nine goals, while Manel Busquets has four after limited early season action.

Syracuse’s 29 goals so far is ranked 17th in the country in goals per game at 2.42. The Orange’s two shutout losses both came at home in a narrow 1-0 fashion to No. 1 Georgetown and No. 3 Duke, who have the nation’s fourth-best and best goals against average, respectively.

Against the Hoyas, Syracuse was held to just six total shots, with none on target. The Orange have only been held to fewer than 10 shots on two other occasions, ironically in two of the three double-overtime games against Pittsburgh and Cornell.

As Syracuse’s young roster began to gel in McIntyre’s 3-5-2, it became more efficient in front of goal. Against Drexel, SU recorded 16 total shots, but the team’s opener came 20 minutes into the second half, a period where Syracuse recorded 13 shots. The Orange had the same problem 11 days later against Niagara.

Similar to Drexel, Syracuse won 2-0 but simultaneously recorded its worst shot percentage (goals/shots) among games in which it has scored. Despite a season high 14 shots on goal and 23 total shots, Syracuse only scored on its 15th shot of the game.

Offensively, McIntyre’s newly formed depth is something he believes has bolstered the Orange’s season, keeping them competitive against a collection of top notch programs.

“Where we stretched the last couple years with depth, I think we’ve been able to bring in some quality this year,” McIntyre said.

Syracuse has conceded the most fouls in the nation by a landslide. Its 196 fouls committed are 21 more than Northeastern, who have the second-most nationally. SU is second in fouls per game at 16.33, 0.23 fewer than Yale.

It has also led to Syracuse’s five penalty kicks allowed, tying its single-season high during the past 20 seasons set in 2018. Whether the referee’s point to the spot kick was valid or not, it has still affected Syracuse in two losses against ranked teams.

Most notably, in SU’s 5-4 double-overtime loss to Louisville, Syracuse conceded two penalty kicks in the game’s first 25 minutes. The two fouls were among Syracuse’s first three fouls of the game, a game where it recorded its season average of 16 fouls. Still, those committed penalties were canceled out by two penalty kick goals by SU itself, and the Orange dominated the game offensively.

Against Penn State, Syracuse managed to hold the Nittany Lions to just one goal after going down 1-0 early on in the first half. The Orange were finally managing to settle into a rainy road game until they gave up a penalty kick three minutes into the second half and conceded a third goal just a minute later.

Looking past unfortunate fouls in the box, Syracuse has been able to establish a trustworthy back three of Max Kent, Christian Curti and Buster Sjoberg. Winning aerial balls has been a major bonus for the Orange this season, and having a deep core of strong and tall defenders is part of that depth McIntyre has talked about.

But Syracuse only managed to concede fewer than 10 fouls in a game just once — eight fouls against an 0-10 Colgate. Prior to that win, the team-low was 10 against Georgetown with four fouls coming from challenges Amferny Sinclair lost in midfield.

22 fouls has been Syracuse’s season high, which it has reached on three separate occasions against Virginia, Pitt and Cornell — the latter two being double-overtime games.

University of Maryland transfer Russell Shealy went down with an apparent ankle injury in warmups prior to the Niagara game, and Lucas Daunhauer took over the starting role for the next eight games. The graduate student took full advantage of that opportunity, winning four games during that span. He allowed 13 goals and recorded 22 saves, managing Syracuse’s ACC schedule — all somewhat unexpectedly.

After playing his undergraduate career with Division II Kentucky Wesleyan, Daunhauer missed just four starts from 2018 to 2020, making 41 appearances. Despite 267 career saves which included 117 in his sophomore season, the Panthers won just nine games during Daunhauer’s three seasons, allowing 101 goals for a 2.52 goals against average.

This season, Daunhauer has led Syracuse through each of its four ACC games, as well as four ranked opponents. Three games went into double-overtime, including a Cornell game where Daunhauer made six saves, two coming in one-on-one breakaway situations.

Daunhauer’s performances have left McIntyre with an unfavorable dilemma on his hands and more depth between the sticks than he expected coming into the season. McIntyre needs to answer if he’s going to rely on experience or consistency to potentially lead Syracuse deep into the postseason.

While Shealy didn’t feature for Maryland in 2018, he trained with and experienced a Terrapin squad that conquered the 2018 College Cup Championship. Shealy started each game during the abbreviated 2020-21 season in his first season at Syracuse, winning just twice between his fall and spring appearances. Shealy has allowed four goals this season, three against Penn State and one versus Georgetown, both ranked teams.

“It’s a good problem to have. Every coach wants that, to have some depth,” McIntyre said. “It’s (Shealy’s) job to impress us in practice. There’s more to his story this season.”

The post Statistics explaining SU’s up and down year with stats of 3 positions appeared first on The Daily Orange.