This story is a preview of this week’s D.O. Sportscast, which is released every Tuesday. Listen to our past episodes on Apple Podcasts and Spotify.

When sports returned, most fans felt a bit of normalcy again. There were no fans, less travel and fewer games, but broadcasters still reeled audiences in.

As players largely compete  in empty arenas and stadiums due to the coronavirus pandemic, broadcasters’ narration of games has become more important than ever. Some have been  forced to call games remotely, while others have been some of the only personnel allowed inside. They’ve had to adjust their entire approach, but many haven’t even noticed.

Current and former Syracuse broadcasters spoke with The Daily Orange about covering each major league that returned this summer, revealing how they adjusted to the new restrictions.

In the first professional sports bubble, Ian Eagle didn’t have the chance to go through his normal rounds of conversations with players, coaches and others in the media. He just kept his head down and went about his business.

“It was certainly different than anything I’ve covered in my 30 years of broadcasting,” he said.

Fifteen rows above one of the nearly-empty NBA courts in Orlando, plexiglass separated Eagle from his partner, Stan Van Gundy. Eagle initially thought he might’ve been detached from the action, but the level of play was “extremely high” and helped Eagle forget about his surroundings, he said.

In one of the first 10 games he called in the bubble, Portland Trail Blazers point guard Damian Lillard hoisted a 40-footer near the end of the game — part of a 61-point effort — that hit the back iron of the hoop, hung for what Eagle said felt like 10 seconds, and went in.

“Somehow it went in, and as I exclaimed ‘RIDICULOUS,’ I looked around and realized there was nobody there to enjoy the moment in person,” Eagle said in an email. “Normally, when you have an incredible highlight like that, you pause and take in the ambiance.”

After 20 days in the bubble, Eagle is now preparing to call NFL games, as its season is slated to begin Sept. 10.

“The NFL will probably have a similar feel, though each venue may approach gameday differently,” Eagle said. “The TV presentation shouldn’t look very different from what fans are accustomed to, but the scene at the stadiums will be more sterile. I expect the broadcast set-up to be nearly identical to what I experienced in the bubble, though until you’re actually in it, you never quite know.”

A no-hitter in baseball is sacred. That’s why Benetti, the TV broadcaster for the Chicago White Sox, and his partner Steve Stone reflexively stood up for the final out of a potential no-hitter from pitcher Lucas Giolito on Tuesday. He wanted to replicate “people at home at the very edge of their seats wondering what was going to happen,” he said.

Benetti was lost in Giolito’s eye. But even without fans, Benetti still felt the tension of the moment.

Benetti was thankful to be at the ballpark this time. He called Korean Baseball League games for ESPN in May while the MLB delayed its season, and the work reminded him of covering games in the minors that sometimes had low-production broadcasts and smaller crowds.

When the MLB returned at the end of July, Benetti began calling games from his usual booth on the South Side of Chicago. For him, road games felt closer to normal than the White Sox’s scheduled 30 home games this season.

“There aren’t fans trickling in and the smell of Italian sausage isn’t there and the grilled onions,” Benetti said. “It’s Twilight zone-ish to be in the ballpark where you’re used to having fans and they’re not there.”

Usually, Benetti forgot about the empty stadium, like during Tuesday’s no-hitter. But a couple of weeks ago, the White Sox hit four-straight home runs, a feat only done 10 times in the majors all-time. It was 85 degrees and sunny, and Benetti kept picturing how the ballpark would’ve reacted.

“There have been people who’ve said to me, ‘I would have had like four dozen people here,’” Benetti said. “That makes me sad, like I hate that. I think tapping into that understanding and knowing that there are people out there who really want nothing more than to be there — they’ve gotta be mentioned.”

Live from an abandoned NHL draft war room, Dan D’Uva needed to retrain his eyes. The Las Vegas Golden Knights radio broadcaster couldn’t look away from the puck anymore because he was focused on three 60-inch television feeds.

Because of their distance from the team’s bubble in Edmonton, D’Uva and his broadcasting partner Gary Lawless usually have to operate with an 11.7 second delay. If there are errors — which sometimes happen, though most viewers are unaware — they’ll improvise on the fly.

“We have rolled with the punches,” D’Uva said. “We think of radio as this theater of the mind. And just like any stage performer, you want to control the audience’s attention.” 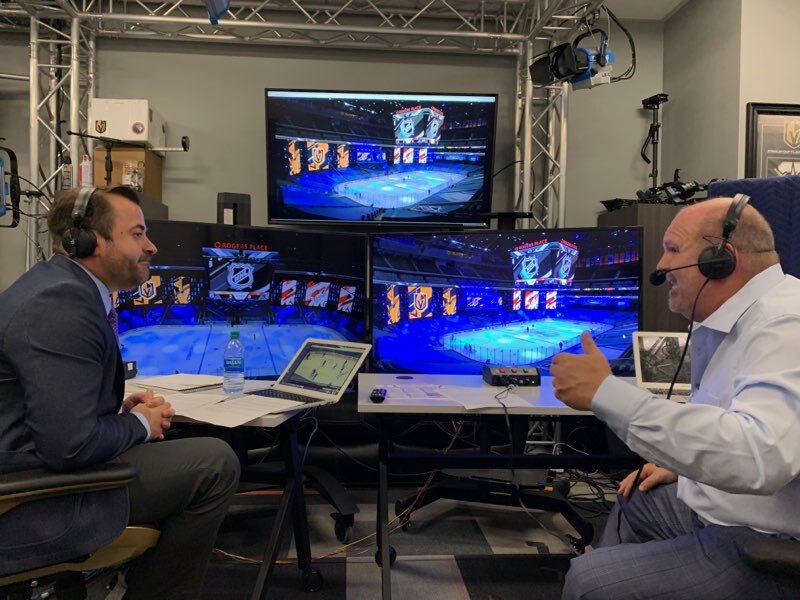 Two years ago, D’Uva was one of 20,000 inside that stadium calling the team’s Stanley Cup run in its inaugural season. But the Golden Knight’s third-straight playoff run is not quite the same.

On radio, the natural soundtrack of pads hitting glass and sticks grazing sticks aren’t always there for him to work with. More than ever, D’Uva has to focus on how a crowd might react to important moments when matches reach their apex, like when the Golden Knights won game two of their first round series in overtime.

The Golden Knight’s radio studio is nearly 1,500 miles from the site of Vegas’ playoff run. D’Uva doesn’t know where he’ll be next. Depending on how far the Golden Knights go into the postseason, the team will make a decision if D’Uva and his crew will join the fanless NHL bubble in Edmonton, he said.

Some stadiums have had thousands of fans, though. This summer in Texas, SU senior Will Scott was the voice of Brazos Valley Bombers, one of the first collegiate leagues to continue amid the pandemic. In a July road game, 2,000 people were in the stands, he said.

“For me, it was surprisingly normal,” Scott said. “I didn’t notice any big differences. I didn’t have to wear a mask on air, and I was six feet from my analyst.”

Ballparks were filled at half-capacity, and as Texas’ case numbers surged at the end of July, Scott worried the playoffs wouldn’t go on. The Bombers didn’t record a positive test during their 30-game regular season, but one team in the league was shut down before the playoffs because of an outbreak, Scott said.

“We were lucky,” Scott said.

Another SU senior, Cooper Boardman, had a similar experience in New York. Broadcasting for the All-American Baseball Challenge, a showcase league, Boardman wasn’t allowed on the field and was restricted to his own booth. 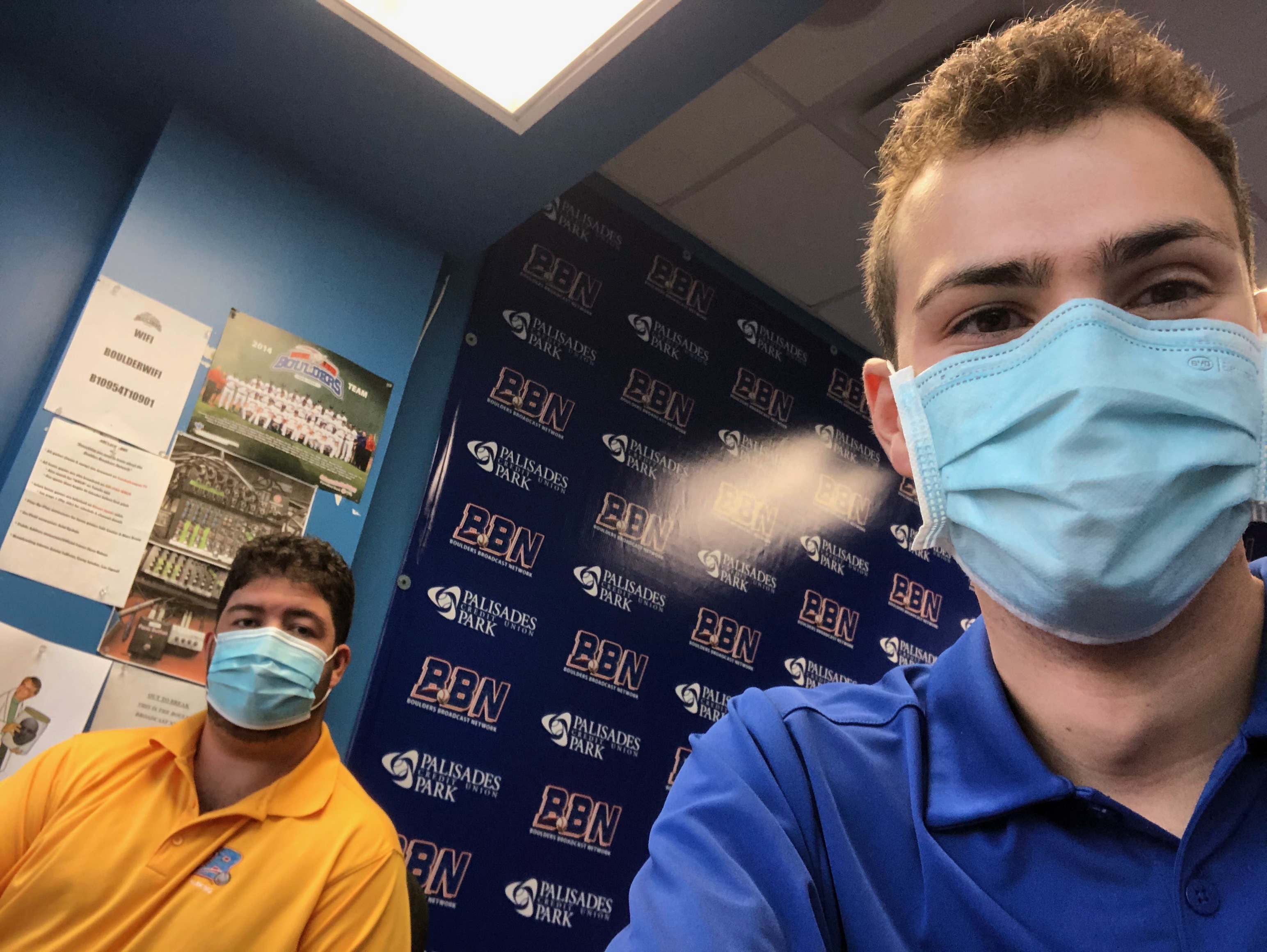 Boardman’s usual schedule — talking to players, arriving several hours early to prepare — was upended. The funniest part of the experience was watching foul balls, he said. Usually, dozens of people chase after the bouncing line drives in unison, hoping to bring a souvenir home. Instead, only a few chase after the balls, pausing when they get within six feet of each other.

“You’re constantly looking around if people are doing what they’re supposed to be doing,” Boardman said. “I’m pretty cynical, and honestly, at this point, how can you not be, but everybody was doing what they needed to.”

The post Sportscasters from NBA, MLB and NHL explain adjustments during COVID-19 appeared first on The Daily Orange.