Kayla McKeon got a call while she was upstairs in her house. She had won a gold medal in bocce ball during the regional games for the Special Olympics in 2011, placing her name into a pool of competitors for a chance to go to the World Games in Athens, Greece. “I’m doing what? I’m going where?” McKeon, who has Down syndrome, responded. She bolted downstairs to see her parents, Patti and Mark, who both had the same reaction.

When she was 12 years old, McKeon had told her mother that she wanted to become a cheerleader. Soon after, Patti saw an advertisement in the paper for the Challenger Baseball League, the largest baseball league in the world for adults and children with disabilities. “Let’s become a player instead of a cheerleader,” Patti told McKeon. McKeon was “all about that,” Patti said.

The McKeons later got into bowling, soccer, floor hockey and eventually, bocce ball. McKeon liked floor hockey because she enjoyed the smacktalk, but she stuck with bocce ball because she’d played it for as long as she could remember, leading her to the Games in Athens.

McKeon’s list of accomplishments is extensive. Before she competed in the Special Olympics — where she finished third in singles bocce ball competition and second in doubles — McKeon became the first congressional lobbyist with Down syndrome in 2015. McKeon also earned a driver’s license and spoke at her commencement at Cicero North Syracuse High School.

Rep. John Katko first met McKeon at a charity baseball game while he was running for Congress. Katko wrote in a statement that McKeon walked right up to him, handed him a business card that read “Kayla McKeon, Motivational Speaker” and told him to call her before walking away. 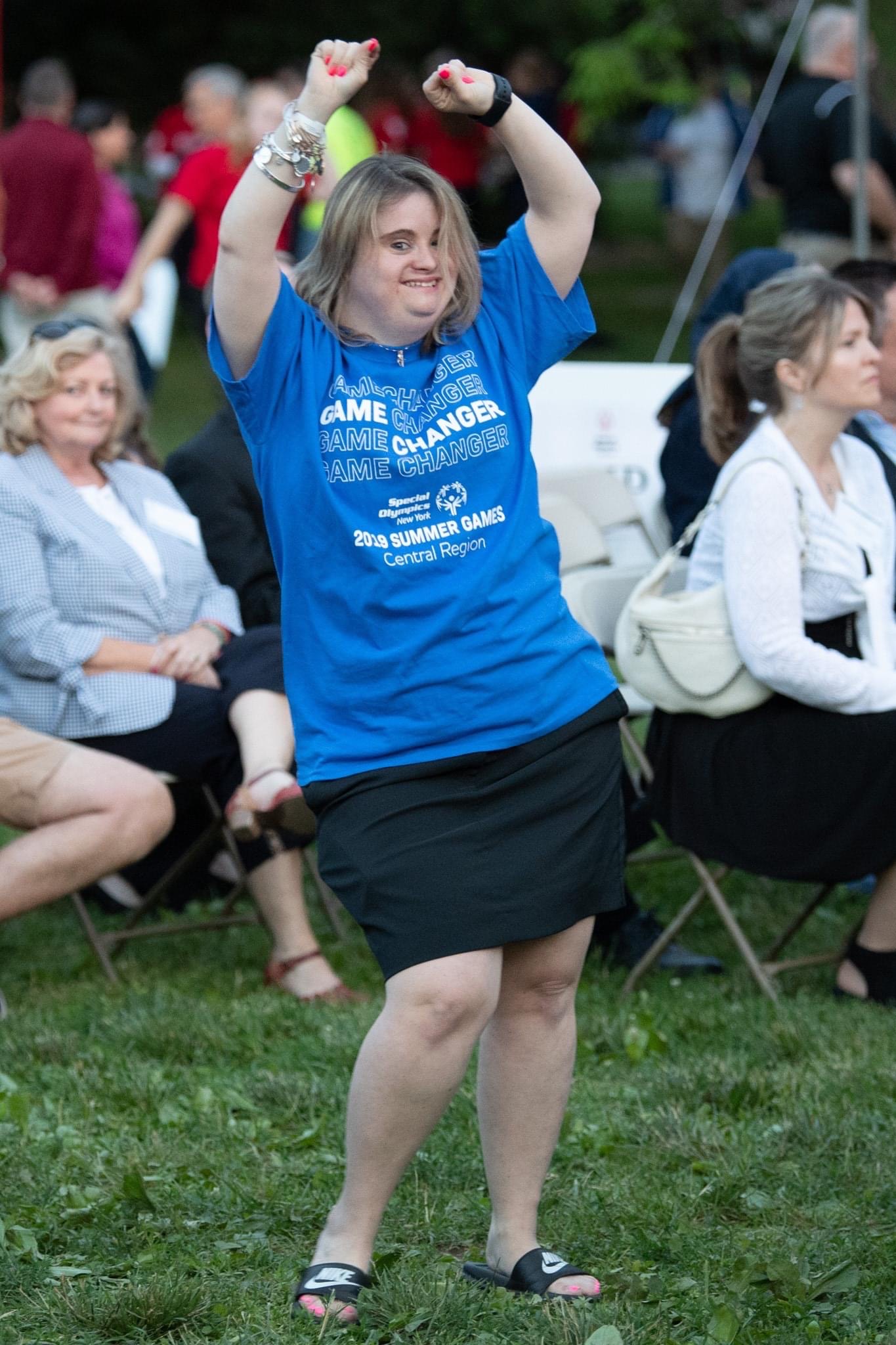 Katko later gave McKeon his business card, and told her that if he won the election, he wanted her to join his staff as an intern. McKeon worked at Katko’s Syracuse office for about two years, assisting with constituent services.

“From that very first conversation, I was instantly impressed with her confidence and infectious spirit,” Katko wrote in a statement to The D.O.

One day during the internship, Katko asked McKeon if she’d like to go to Washington, D.C., for a roundtable conference on employment with the National Down Syndrome Society. The president of the NDSS knew McKeon from the numerous galas and events she had spoken at. After the roundtable, the president asked McKeon if she’d like to be a lobbyist for NDSS.

McKeon agreed and moved to the district, marking the first time she had lived alone. She talked with members of Congress about lobbying for people who are disabled, hoping passed laws would allow people to lead lives that they always dreamed of, McKeon said.

“My parents say, ‘Kayla, you don’t know how many lives you have touched,’” McKeon said. “And sometimes I don’t even realize that myself, but I feel incredible.”

After the Games, McKeon made appearances at a teachers conference in Syracuse and the Society for Human Resource Management in Las Vegas — each bringing in crowds of thousands, Patti said.

State Sen. John Mannion thanked McKeon for her advocacy with the NDSS at a press conference, and McKeon also thanked Mannion for helping get part of the state budget to go toward the Special Olympics. Mannion paused and turned toward a piece of paper with an official New York State Senate proclamation to begin his “ruse,” Mark said. Once Mannion finished listing off McKeon’s accomplishments and her work for people with disabilities, he told her she’d be going to the Special Olympics in Disney World, Florida, to compete in bocce the following year.

McKeon swung her left arm behind her to hold her parents’ hands. She said she doesn’t know if her parents teared up, but she knows she did.

“It’s just emotional to see her do the things that she does. It’s unbelievable,” Mark said. “To think all she’s accomplished — and she’s 34 years old. I don’t think she’s done yet.”

Mark clearly remembered the fifth time McKeon took her driving test. He drove around the block while McKeon took her test, sneaking behind a corner to await her return. And when he peaked around the corner, he saw the instructor telling McKeon that she’d passed. Mark said McKeon danced, yelled, screamed and kicked her feet.

“It pretty much summarized her life,” Mark said. “She wanted to accomplish something, she worked hard at it, they told her ‘no’ … and there she was, doing a happy dance because she succeeded.”