As a junior, center midfielder Sienna Pegram led Lower Dauphin High School (Pennsylvania) to a District Championship for the first time in three years. As a senior, she was voted captain by her teammates, and she spoke in front of the team in huddles before and during games. Throughout high school, she led Lower Dauphin to the state finals two years in a row.

“You could just see every time she practiced she would get better,” Linda Kreiser, Pegram’s high school head coach at Lower Dauphin said. “It’s her drive and her motivation to improve.”

Now a sophomore at Syracuse, Pegram is an automatic starter under head coach Ange Bradley — but as defender. Shifting from her traditional role as a center midfielder at Lower Dauphin, Pegram made an immediate impact after joining the Orange as a defender. She started 14 of 16 games as a freshman throughout the pandemic-altered fall and spring seasons last year. This season, she’s started all 10 games.

“You could tell she was just so athletic and so hardworking,” Kreiser said. “(She) was one of those girls that you think ‘Oh I can’t wait till she moves up to senior high.’”

Pegram’s prevention of the Cavaliers’ goal happened in the first game of her collegiate career, in which she started. It was also the first defensive stop in her Syracuse career.

“Her last two seasons at Lower Dauphin she was a midfielder for us center midfielder, (in) which you had to play both offense and defense,” Kresier said. “I’m not surprised in college that she’s playing defense because she has the footwork and the tenacity and good stick skills.” 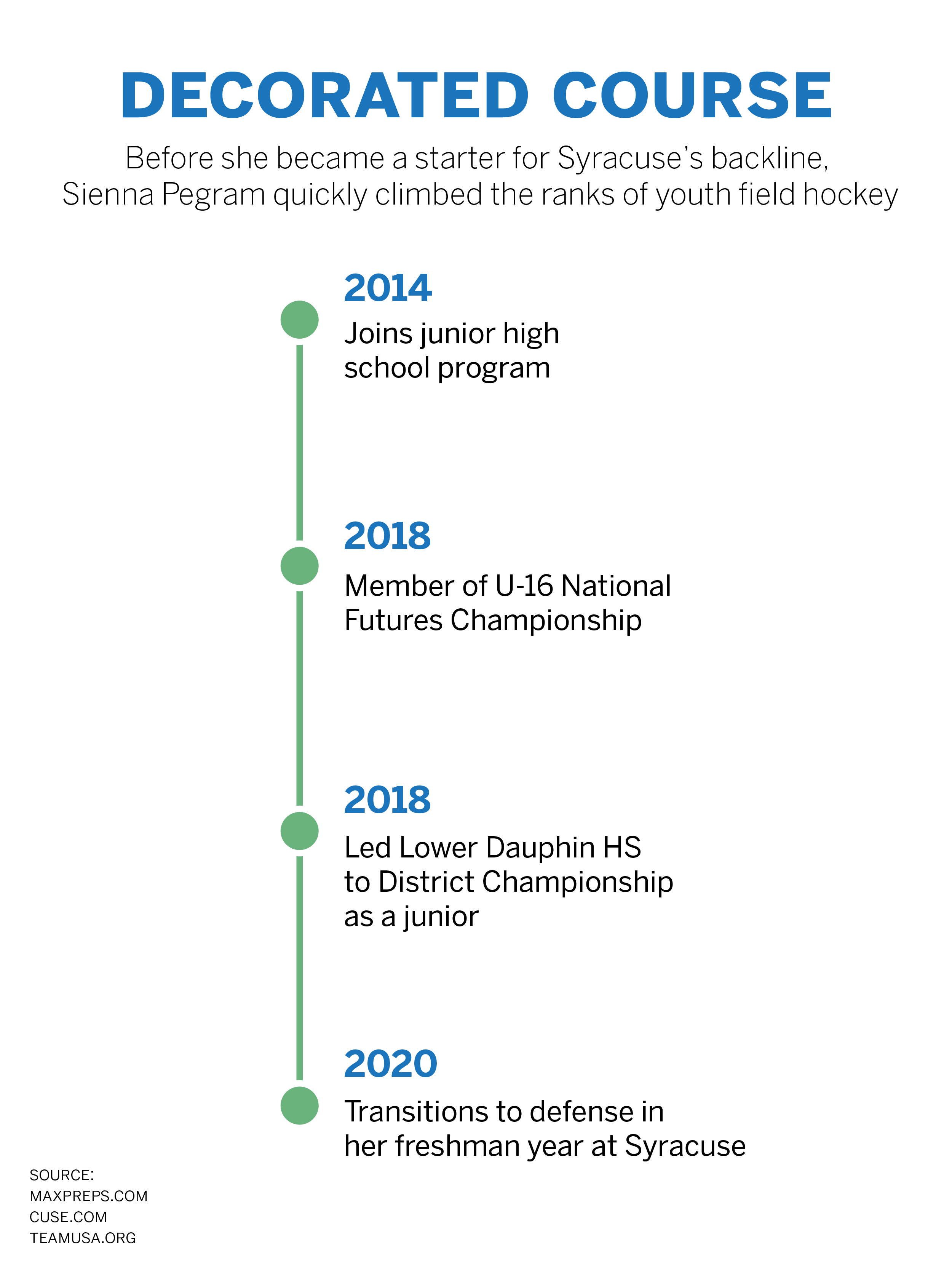 Pegram scored five goals and notched 12 assists her senior year, which propelled her to becoming a member of the Mid-Penn Keystone Division All-Star First Team. When she was at Lower Dauphin, Pegram also played for Spooky Nook Field Hockey, a club team in Lancaster, Pennsylvania, and for USA Field Hockey’s “Futures” or Olympic Development Pathway Program. In 2018, she played with the U-16 squad at the National Futures Championship.

But even with her multitude of experience in the sport, Pegram still had to make significant adjustments Pegram with her transition from high school to Division I athletics. The biggest change was the field itself — games are played on water-based astroturf — and the speed of the game, Kreiser said.

“It’s a huge jump … Syracuse is one of the top programs in Division I,” Kreiser said. “For Sienna to be starting as a freshman, it’s just kudos to her,” Kreiser said.

After starting in all but two games last year, Pegram has developed into a critical component in SU’s backline. She helped SU hold opponents to 1.88 goals per game last season.

“I’m more confident and calm than I was the past two years because I’ve done it for now two seasons,” Pegram said. “I’ve really grown as a player because I know what I’m supposed to do on the field.”

In 2021, Syracuse’s defensive unit has held opponents to less than one goal a game (0.90). Pegram has started all 10 games this season alongside central defender Eefke van den Nieuwenhof. One of the Orange’s toughest tests for the defense came against No. 5 North Carolina, but Pegram didn’t shy away from the challenge.

On a UNC counterattack with four minutes left in the second quarter, Pegram intercepted a pass that, if completed, would’ve allowed the Tar Heels to get a clear shot on goal. Pegram and the defense shutout North Carolina in a 5-0 upset win.

“She just does her role … she doesn’t need to be in the spotlight,” Bradley said about Pegram. “She’ll do whatever is needed for her team.”

The post Sienna Pegram’s selfless move to defense grants her a starting spot for SU appeared first on The Daily Orange.