Sideline Cancer’s run began with just over two minutes to go in the third quarter. On a fastbreak, SC’s Jamel Artis drove down the lane and found Dion Wright on the right side of the basket. Wright collected the pass, spun to his right and shed a defender before finishing the uncontested layup to improve Sideline Cancer’s lead to 39-34.

By the end of the third, the run had become 11-0 and extended to 24-2 before a layup from John Gillon. No. 22 Sideline Cancer turned a tie at halftime into a 14-point lead over No. 3 Boeheim’s Army and cruised to a 65-48 victory in The Basketball Tournament’s quarterfinals.

While the teams combined to shoot 3-for-30 from 3 in the first half, Sideline Cancer found its rhythm in the second. Marcus Keene struggled, not scoring until late in the third quarter, but Maurice Creek led all scorers with 22 points. With the loss, Boeheim’s Army has now failed to make TBT’s semifinals in five of six tournaments.

“They’ve been very heavily relying on (Keene),” Gillon said before the game. “But one point I made was we can’t let someone else kill us just because we take him out of the game.”

Gillon’s warning foreshadowed the result for Boeheim’s Army. After slowing down Sideline Cancer in the first half, Boeheim’s Army’s defensive strategy started to falter. With just over seven minutes left in the fourth quarter, down 50-34, Demetris Nichols turned the ball over, dropped his head and sighed heavily.

A few possessions later, Donte Greene took a fade-away, contested 3-pointer from the corner, which bounced off the side of the rim. SC’s Remy Abell collected a pass before blazing past Eric Devendorf for an easy layup to continue Sideline Cancer’s game-deciding run.

Before the matchup, Andrew White III said that Keene would struggle against the 2-3 zone. Unlike man-to-man, Keene couldn’t drive in the lane on one defender. However, when Boeheim’s Army switched to man defense, Sideline Cancer and Keene gained momentum.

“If you go back and watch the film, every time I scored is when they went man-to-man in the second half,” Keene said. “The zone threw me off, I feel like it threw the whole team off.”

As the second half continued, the bench for Boeheim’s Army became quieter and quieter, while Sideline Cancer head coach Charles Parker continued to scream encouragement. 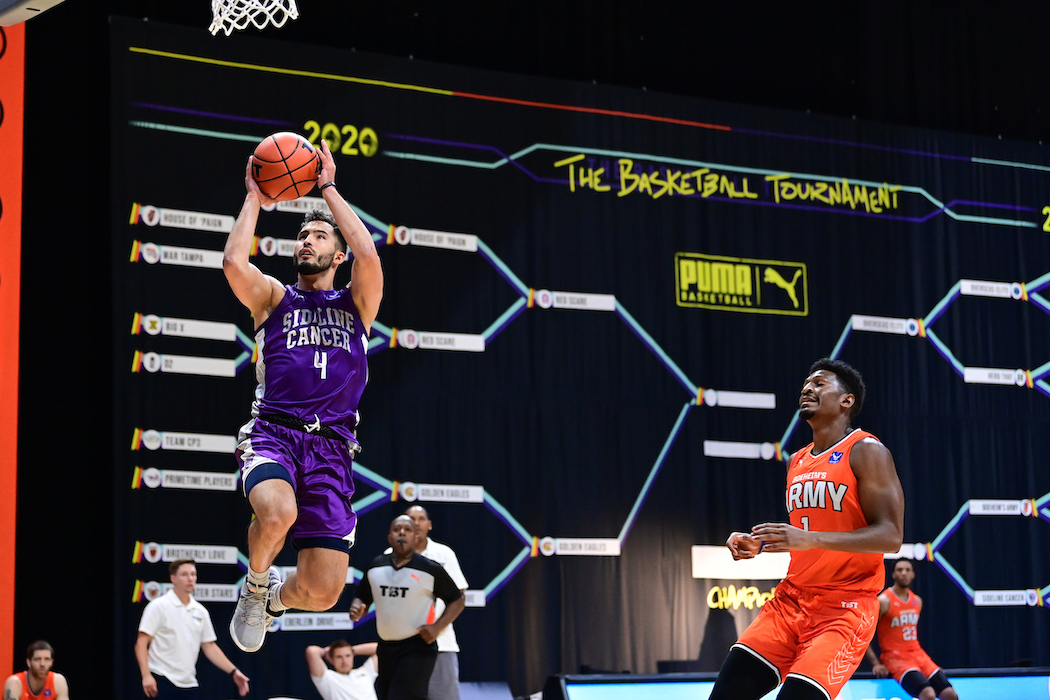 While both teams continued to struggle from 3, Sideline Cancer continued its second-half run with a rebounding advantage. Even without Diamond Stone — who missed the game because of injury — Sideline Cancer’s Eric Thompson finished with 18 rebounds and dominated on the glass from the beginning of the game.

After winning the opening tip, Sideline Cancer strolled down the court before shooting a 3. After the shot fell short, Thompson, in between Greene and Malachi Richardson, collected the rebound and quickly laid the ball in for an early 2-0 lead.

Greene’s struggles from 3 continued on offense. Shot after shot fell short, sometimes as an air-ball, while others barely scraped the rim. Greene finished 0-for-6 from 3 with just eight points.

Only four players scored over eight points for Boeheim’s Army, and Devendorf led with 14 points on 6-for-16 shooting. After taking care of the ball against Men of Mackey, BA finished with 11 turnovers.

With seven minutes and 20 seconds left in the second quarter, Gillon drove into the lane and began a Euro step. He lost control as he hopped from his right foot to his left with the ball over his head, and Richardson jumped for a contested layup minutes later. The ball spun off after rolling around the rim, and Sideline Cancer collected the rebound.

As Sideline Cancer began its fastbreak, Will Rayman intercepted a lazy bounce pass. The Colgate graduate reversed the transition offense and attempted a contested layup of his own. But like Richardson and Gillon, Rayman couldn’t convert.

By the third quarter’s midpoint, Sideline Cancer was in full control. Even Keene – the focal point of BA’s defense – was starting to find open looks. With a 2-3 zone in disarray in front of him, Keene hit a wide-open 3 from the wing to extend Sideline Cancer’s lead. And as those looks became more and more common in the fourth quarter, Boeheim’s Army inched toward its tournament exit.

“We had our chances, we had our shots,” BA head coach Ryan Blackwell said. “We had another shot today and we just didn’t capitalize.”