A deadlocked 3-3 score after a goalless overtime period left Syracuse and Boston University’s first round “Battle at the Burgh” matchup fated for an all-decisive shootout. The Orange and the Terriers each sent three players to center ice in hopes of securing a tournament-final berth. But all six players couldn’t convert on their respective shots, leading to a sudden death scenario.

Syracuse’s fourth shooter – Shelby Calof – took to the ice and easily found the back of the net after sweeping in from the right side of the rink and cleanly slotting the puck between Boston goaltender Kate Stuart’s legs. Calof’s goal meant that Haylee Blinkhorn – BU’s fourth shooter – was required to score in order for the Terriers’ tournament hopes to be kept alive.

Blinkhorn skated toward Syracuse goaltender Arielle DeSmet head-on before faking to the left and ultimately gliding right attempting to wrap the puck around the SU senior. But DeSmet stood tall, tracked Blinkhorn the entire way and successfully thwarted the puck with her left leg. The Vermont native skated forward, pumping her fist in celebration before the Syracuse bench cleared and flooded their goaltender.

Calof and DeSmet’s success sealed Syracuse’s (7-9-4, 5-3 College Hockey America) 4-3 win over Boston University (9-6-4, 8-4-3 Hockey East). The Orange now advance to the “Battle at the Burgh” championship game Sunday and will face the winner of the Penn State – St. Cloud State first round matchup. Two goals from SU forward Abby Moloughney propelled the Orange to a 3-1 lead after two periods, but a poor defensive showing in the final period allowed the Terriers to erase the two-goal deficit.

BU looked poised to find a game-winning goal as the Terriers primarily controlled the tempo throughout the five-minute overtime period and forced five saves from DeSmet. The Orange’s most promising opportunity to end the game came when forwards Victoria Klimek and Rayla Clemons found themselves in a two-on-one situation in Boston’s defensive zone. The pair raced toward BU’s net, but couldn’t connect on the final pass.

Moloughney initially opened the scoring in the first period of the contest. The senior scored her eighth goal of the season 15 seconds into Syracuse’s first power play of the game after BU’s Andi Calderone received a two-minute penalty for hooking. Lauren Bellefontaine collected the puck on the left side of the Terriers’ defensive zone before passing it across the ice to Moloughney, who immediately fired a slap shot past Stuart.

Boston responded nearly two minutes later, though. Lacey Martin sent a low-driving shot at DeSmet, who blocked it with her left leg. But DeSmet only pushed the puck as far as Mackenna Parker, who was crashing in from the right wing. Parker capitalized on the pocket of open space and smoothly fired the puck into the top right of the net to tie the game.

Parker’s equalizer caused both teams to generate more attacking opportunities in the back half of the first period. Syracuse ultimately took advantage of this increased tempo, registering four shots in a matter of 30 seconds with less than two minutes left in the first. 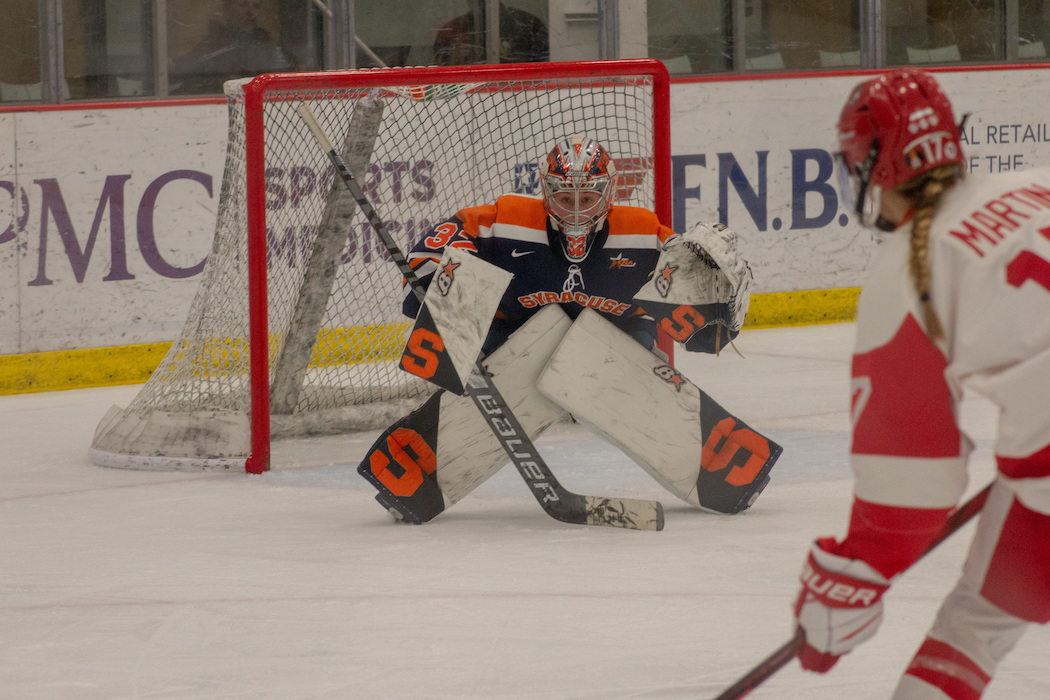 But SU couldn’t restore its lead before the end of the first, instead translating its energy directly into the second period. High neutral zone pressure and aggressive play resulted in Moloughney notching her second goal less than seven minutes into the second. Jessica DiGirolamo skated through the left side of the neutral zone before passing to Bellefontaine, who squared the puck to Moloughney. The Ontario native slotted it home to put the Orange back in front.

Syracuse sustained this style of play for the remainder of the second period, which ultimately helped it find a third goal through Sarah Thompson. During an extended possession in Boston’s defensive zone, DiGirolamo sent in a powerful shot from distance. The Terriers’ defenders scrambled in an attempt to stop a shot, but they couldn’t react in time before Thompson found the back of the net.

Heading into the third period with a 3-1 lead, the Orange were 20 minutes away from securing their spot in the championship game. But Boston came back onto the ice and reversed the game’s momentum in its favor as the Orange struggled to clear the puck from their defensive zone in the opening minutes of the third.

When BU’s Calderone received a two-minute penalty for slashing at 3:35 in the period, it seemed as though Syracuse had thwarted Boston’s pressure and would stabilize the game with the Terriers short-handed. But the Terriers didn’t let up, and capitalized on SU’s positional mishaps when Blinkhorn skated through the neutral zone and breezed past two Syracuse defenders for the goal.

Syracuse couldn’t take advantage after any of Boston’s three penalties throughout the third period, which allowed for Martin to ultimately equalize the scoring again after finding a hole in the SU defense. With the Orange unable to respond, the matchup was sent to overtime.

Still, the Orange managed to stay strong defensively throughout the overtime period, allowing Calof to put the final dagger in the fourth round of the shootout.

The post Shootout win over BU sends Syracuse to ‘Battle at the Burgh’ championship game appeared first on The Daily Orange.