ike Flynn was eating dinner in New York City when he was interrupted by a call from Derrick Mullen, who told Flynn that he needed to watch a certain player at the Rose Classic high school girls basketball tournament. So Flynn left dinner and headed to the game.

On the court, Flynn — the founder of the Philadelphia Belles Amateur Athletic Union team — saw a thin, 6-foot-2 player holding the ball above her head with arms that Allie Bessetti, an assistant coach for the Belles, described as long enough to “tie her shoes standing up straight.” After Stewart made a few plays, Flynn was amazed at the way she played, which he said reminded him of Kevin Garnett. Curious, Flynn went up to the scorer’s table to find out more about her. They told him that she was only a freshman and that her name was Breanna Stewart.

After the tournament game ended, Flynn approached Stewart’s father, Brian, and urged him to let his daughter try out for the Belles. Brian initially ignored Flynn’s request. A few weeks later, Flynn drove up to Stewart’s hometown of Syracuse to try his luck again with the Stewarts, asking Brian and Heather Stewart to bring their daughter to Philadelphia to watch the Belles practice. The next week, Brian and Stewart drove three hours from Syracuse to Philadelphia. Brian told Stewart to bring her basketball shoes just in case.

On the Belles’ roster, there were Division I-caliber players with offers from schools such as Duke and North Carolina, but that didn’t faze Stewart, who wasn’t available for an interview.

“We really just went there for her to watch and see what it was all about,” Brian said. “But she went out there. She had her sneakers and she wanted to get out there with them.”

Despite being younger than many of the players, Stewart fit in with girls her height and skill level, her father said. She joined the Belles after visiting.

Later that summer, Stewart dominated the court while playing with the Belles at the Boo Williams AAU tournament in Virginia. At one point, the Belles star blocked a player’s shot, grabbed the rebound, passed it out to her teammate and sprinted the length of the court to get the ball back for a layup — a rare play for girls of Stewart’s height. Tennessee head coach Pat Summitt watched Stewart from the sidelines and told Flynn that Stewart was the “best player she’s seen in the last ten years.” 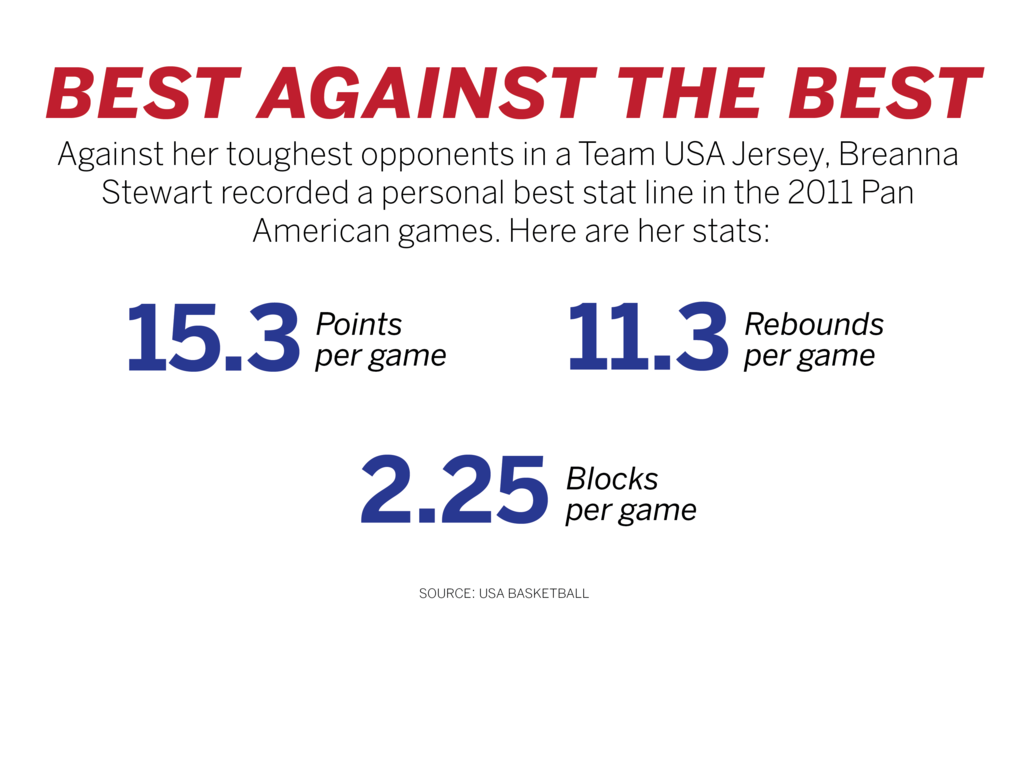 After watching Stewart play during the tournament, Flynn realized Stewart had the talent to join the USA Basketball team in the U16 division. At tryouts, future teammate Ariel Massengale remembered looking at Stewart and misjudging her tall, thin frame, thinking she wouldn’t be athletic. But Stewart surprised Massengale by blocking her shots, and Massengale was also impressed with Stewart’s offensive perimeter skills — an uncommon trait for girls Stewart’s height.

“She’s a big with guard skills that can literally do anything on the basketball court,” Massengale said.

Despite being just 14 years old, Stewart was one of 12 players to make the USA Basketball U16 roster. She received the nickname “six-ten” because of her 6-foot-10 wingspan.

The team went to Mexico City in August to play in the inaugural International Basketball Federation Americas U16 championship. Team USA dominated every opponent in its path, allowing Stewart and the team to qualify for the 2010 FIBA U17 World Championship.

The following year they traveled to France to play at the world games. Team USA — with the help of Stewart’s 12.8 points per game average — went unchallenged in the tournament, going 8-0 and earning a gold medal.

Jennifer Rizzotti saw Stewart play for the first time during a training camp in 2010 when the U18 team — which Rizzotti was the head coach for at the time — scrimmaged against the U17 team Stewart played on. Rizzotti initially described Stewart as “noticeable,” but not without weaknesses. On the scouting report, the U18 players were instructed to sit back on defense to make her shoot threes and to force Stewart to the left — her weaker side. But during the U19 FIBA World Championships in Chile, Rizzotti saw developments in Stewart’s game.

“I was blown away at how much she had improved,” Rizzotti said. “She literally went from a kid who had … some weaknesses to the MVP of the U19 tournament as a 16-year-old.”

Stewart averaged 11.2 points and 7.3 rebounds, leading Team USA to another gold medal victory. With the game tied in the quarterfinals against France, Stewart scored two free throws with 1:04 left, giving Team USA the lead after being down by 13 points.

“Offensively, it was like, whenever we needed a bucket, you’re just going to six-ten,” Massengale said. “Everybody knew that. She had proven that to us time and time again.”

Following the U19 FIBA games, Carol Callan, the USA Basketball Women’s National Team director, was running short on professional and college players for the Pan American games, so she asked Stewart — who had proven that she could compete despite being young — to play. 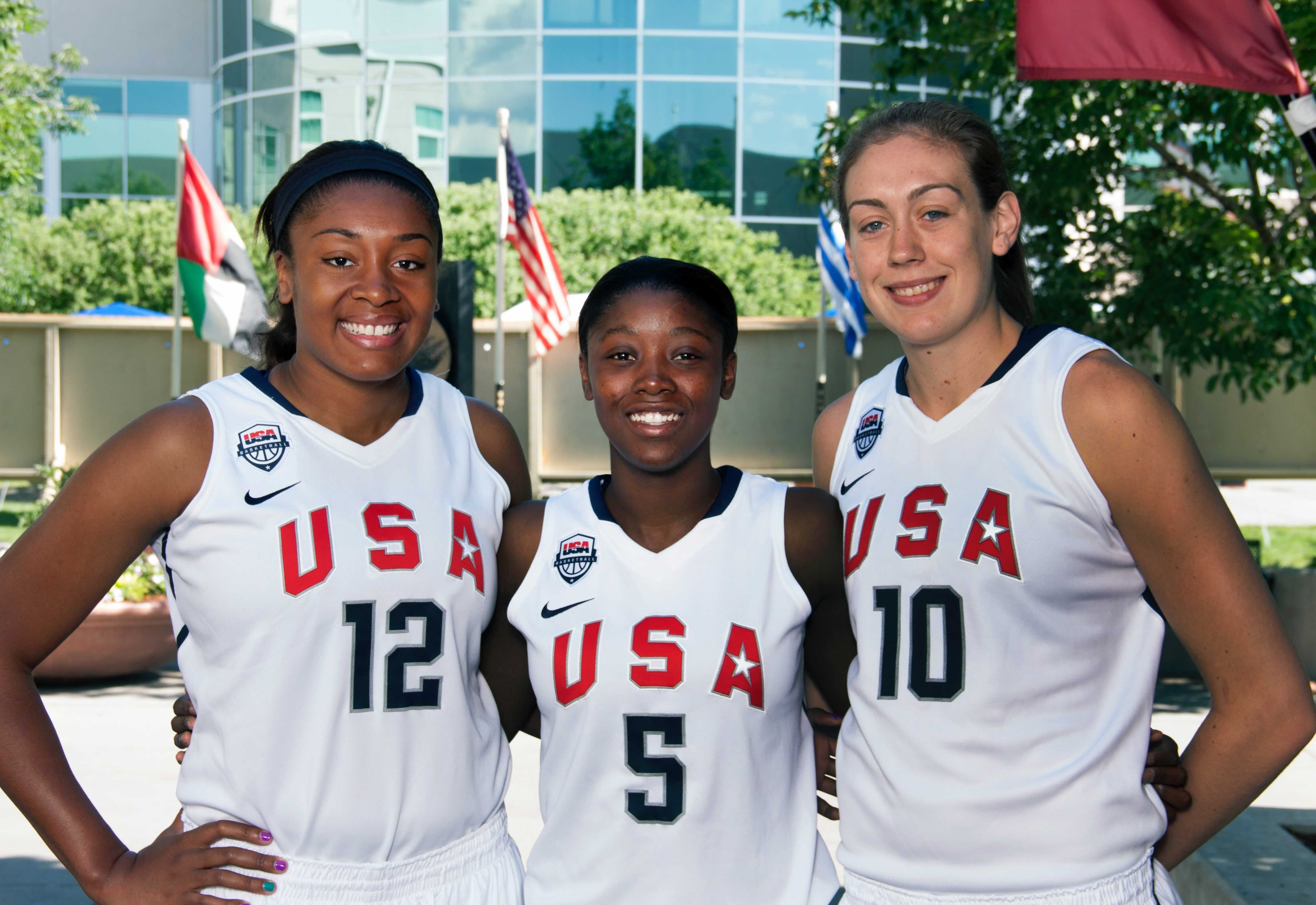 The team finished seventh after going 2-2 in the tournament — which accounted for two of Stewart’s six total losses in her ten years wearing a Team USA jersey. In the four Pan Am games, she averaged 15.3 points and 11.3 rebounds, her best statline yet against some of the toughest competition she had ever faced.

A year later, Stewart was preparing to meet Katie Meier, the new head coach of the U18 and U19 divisions of Team USA. Meier said she was nervous about meeting Stewart, who had just been named the Gatorade Female Athlete of the Year and had already played on four USA teams.

But Stewart and Meier bonded after they got to know each other, which made it easier for Meier to trust Stewart on the court during the 2013 U19 FIBA Tournament.

Team USA played against the Netherlands in the tournament, so before the game, Meier scouted the Netherlands and highlighted Laura Cornelius as one of their best players. Meier, who usually emphasized taking charges over blocking shots, told Stewart to block Cornelius’ shot. During the game, Cornelius beat a Team USA player to the paint, but Stewart jumped through the air and pounded her shot to the ground.

During the semifinals, Team USA had a rematch with Australia, whom it had defeated in the preliminary round. Team USA’s starters struggled, leading Meier to take them out of the game. When Stewart re-entered the game she yelled for the “Zipper” play.

“I want Zipper — call zipper for me,” Meier recalled Stewart saying down the court.

Stewart would run Zipper as a guard and then call it for herself as a post player. In that stretch, Stewart scored 14 points, and Team USA went on a 21-0 run at the end of the first half, putting the win out of Australia’s reach. Stewart would later win her fifth gold medal after helping Team USA beat France by 31 points in the championship game.

“She’s unflappable,” Meier said. “She’s always breathing. She’s playing so hard and her cheeks get all red but she’s looking at you like I know we’re going to win this thing.”

In 2016, Stewart finally competed in the Olympics — the youngest player on the team at just 21 years old — and helped bring home a gold medal for the U.S. At 26 years old, Stewart now has five junior gold medals, two FIBA world cup championships and an Olympic gold medal in her trophy case, with an overall record of 84-6 with Team USA.

“She has a chance to be the most decorated and long-lasting tenured player that we’ll ever have in USA basketball,” Callan said.

The post ‘She’s unflappable’: Breanna Stewart took her talents across the world with Team USA appeared first on The Daily Orange.