Minutes before Syracuse’s fourth game of the regular season against Niagara, starting goalkeeper Russell Shealy left the field. During warmups, the redshirt junior rolled his ankle, according to head coach Ian McIntyre. With Shealy out of the game, the Orange turned to backup keeper Lucas Daunhauer.

The graduate student said he found out he was starting just 10 minutes before the game against the Purple Eagles. While the move was surprising, it was something Daunhauer said he was mentally prepared for. He posted a shutout in his first career start with Syracuse. Against Niagara, Daunhauer faced only four shots and made one save, but despite the low number of shots, head coach Ian McIntyre said the new goalkeeper was amazing against some of the physical threats that came from the Purple Eagles.

Four days later, however, Syracuse’s next opponent would provide an even greater challenge for Daunhauer. In the Orange’s first Atlantic Coast Conference game, they faced Virginia, who received 23 votes from the United Soccer Coaches poll at the time. In preparation for the game, Daunhauer called it “the biggest soccer game he had ever played in.”

Daunhauer dominated with three saves in SU’s 3-1 victory over Virginia in his first ACC game. Although he gave up a goal to the Cavaliers in the first half, Daunhauer didn’t let up any attempts in the second.

“You’re playing a seven-time national champion in their home with a big crowd in your first ACC start,” McIntyre said. “While (Daunhauer) would say the guys in front of him help him out, he was terrific.”

The streak was the beginning of Daunhauer’s time as the starter, which lasted until Oct. 5. Shealy returned as the starter in a 3-0 victory over Colgate. Both goalkeepers have had shutouts and dominant victories, showing the potential that brought them to Syracuse. However, the pair have also struggled in games as well, with both Daunhauer and Shealy having at least one game where they conceded three goals.

The strengths and weaknesses from the two give the Orange an interesting dynamic for the remainder of the season since both have shown inconsistencies. At Mater Dei High School (Indiana), Daunhauer was known as a kid who turned heads immediately. Stan Atherton, his goalkeeping coach at Mater Dei, said Daunhauer came to the team as a “wiry little guy” and not putting too much thought into his play. 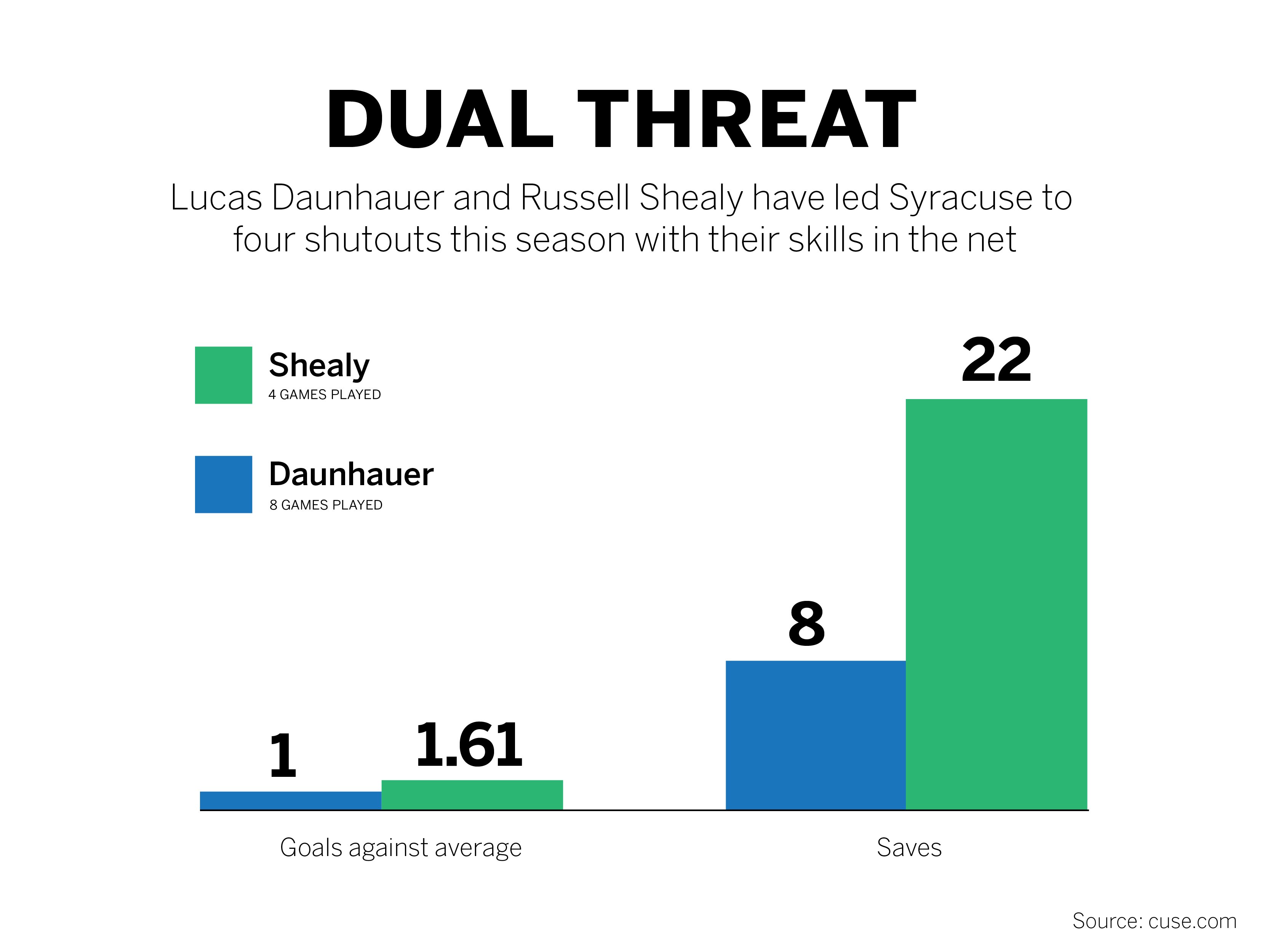 Atherton said the Wildcats typically ran a 4-4-2. And with Daunhauer in net, Mater Dei had a hard line in the back because of how he could read the field. He not only tightened up the defense, but he also opened up the offense as well, creating a solid counter-attack, Atherton said.

“He was like a safety valve,” Atherton said. “That 4-4-2 made our whole team a little more wide open because it wasn’t just him winning the ball because he could win the ball in the box and go out in the field, play with his feet, like a regular field player.”

While attending Mater Dei, Daunhauer grew to become 6-foot-3 and was named to First Team All-SIAC in 2016 and 2017. In the last conference game of the regular season against Castle High School, a team that had beaten Mater Dei two years in a row, the then-senior Daunhauer made 11 saves in a 5-1 victory. Atherton said Daunhauer won nearly every air battle and stopped nearly every Castle breakaway.

“You don’t want to motivate Lucas like that,” Atherton said. “If you give him an inch, he’s going to take it a mile.”

Despite the all-conference excellence, Daunhauer went on to play Division II soccer at Kentucky Wesleyan. With the Panthers, Daunhauer ranked first in the Great Midwest Athletic Conference with 5.94 saves per game in his freshman year. He also earned GMAC All-Conference Honorable Mentions in 2018 and 2019.

Both Daunhauer and Atherton believed that Daunhauer was bigger than Division II soccer. Syracuse’s formation, the 3-5-2, was the same as Kentucky Wesleyan, which helped the adjustment process when he transferred to SU.

Despite the run of domination and multiple shutouts, Daunhauer still has struggled in games for Syracuse. On Sept. 17 against Louisville, Daunhauer gave up five goals in the double-overtime loss. This included the graduate student keeper getting beaten twice on penalty kicks and giving up a header to Josh Jones in the 105th minute, which lost the game.

Like Daunhauer, Shealy also had highs and lows in his first games at Syracuse. In spring 2021, he surrendered three goals against Clemson and Louisville in back-to-back games. Chad Liddle, Shealy’s high school coach at Darlington School, said he remembers the games when Shealy excelled. 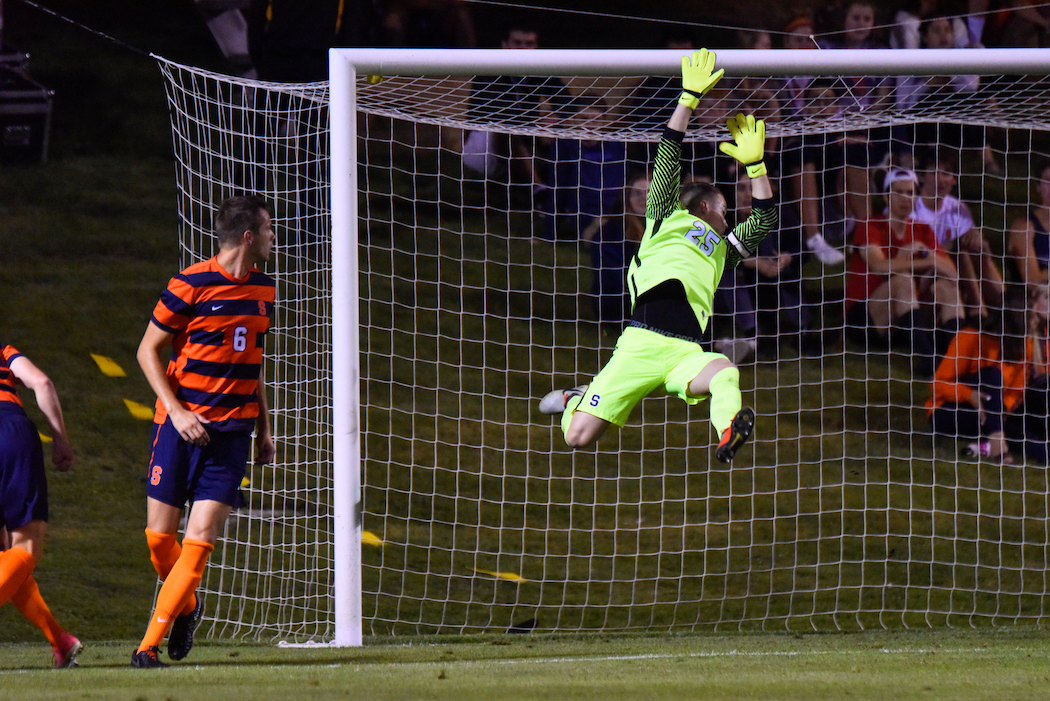 Russell Shealy and Lucas Daunhauer have split time in goal for the Orange this season. Both have let more than three goals in a game more than once this year. Max Freund | Assistant Photo Editor

Liddle saw Shealy first when Syracuse took on Virginia Tech last fall. Shealy ended the game with eight saves — the most in his time in a single game at Syracuse. The game ended in a 1-1 draw, but Liddle said he was impressed by the calming presence of his former player at the backline.

“Virginia Tech has a very good athletic team and it had a target for him,” Liddle said. “The Hokies were trying to serve constantly as far as balls into his head. And Russell was very good off his line, very strong off his line.”

Through working with Shealy at Darlington School or seeing him join the Atlanta United Academy, Liddle said Shealy’s range, physical build and distribution of the ball are some of his strengths.

“He’ll catch a ball more than most goalkeepers,” Liddle said. “Most goalkeepers will resort to boxing it. But he knows, and he has confidence enough in here that he can catch and take a few knocks in the air and still come down with the ball.”

Shealy trains with Liddle to this day and throughout his entire journey from Atlanta United’s youth teams, the University of Maryland and SU. In those practice sessions, Liddle, a former DI goalkeeper himself, focused on Shealy gaining the muscle memory. They would pick one or two techniques and hone in on them during the session. The pair went over every single movement Shealy made in net to establish the needed muscle memory.

Liddle said his mentality as a goalkeepers coach was to help his players deal with chaos. Goalies have to change directions and angles in seconds to get set and ready for an opposing shot. Like any other goalie he coached, Liddle wanted to help Shealy navigate through the chaos. Anytime Liddle would plan to shoot at the net at all, Shealy would get set.

“There’s four or five seconds of chaotic movements,” Liddle said. “We had to adjust his angles and move across the goalmouth, and then he had to be set the moment that the ball is about to be struck.”

After establishing muscle memory and building better physical strength, Shealy became a key part of Atlanta United’s Academy teams. He started 20 games for the U-17/18 team and helped the squad climb atop the Southeast division in the then-U.S. Soccer Development Academy league.

Shealy was rated by Top Drawer Soccer as the No. 102 recruit in the country in 2018 when he was heading to Maryland. In his freshman year, Shealy served as the backup behind Dayne St. Clair, who led the Terrapins to a national championship and is now on Minnesota United.

Shealy redshirted but saw little time in 2019, appearing in five games. Like Daunhauer, Shealy needed a new fit. Shealy has had great games holding Georgetown, the top-ranked team in the country, to one goal. Liddle said he sees a bright future in Shealy because of his transfer into a conference full of future pro talent.

“Syracuse was a good change for him,” Liddle said. “Being in the ACC is another major reason why I think Russell can still be more apt to be able to go into the MLS.”

The post Shealy, Daunhauer emerge as dual threat at goalkeeper appeared first on The Daily Orange.