aeva Djaldi-Tabdi was uncomfortable during her first three years at Syracuse. The Orange’s style of play differed from what she had grown up playing in France, and a year of professional basketball after high school forced an adjustment back into the classroom.

In her first semester, she and Marie-Paule Foppossi, a fellow redshirting French player, weren’t required to attend morning practice as they adjusted to the United States. But once the second semester began, 6 a.m. practices became mandatory.

“I wasn’t always going 100%,” Djaldi-Tabdi said. “Sometimes I was annoyed about things in practice and I was just like, ‘Okay, whatever, like I’m not doing this.’”

Part of Djaldi-Tabdi’s growth has stemmed from an increased focus in practice. Now entering her fourth season at SU as a redshirt junior, Djaldi-Tabdi is poised to serve as the team’s sixth man, a similar role to the one she held last season. Before committing to Syracuse, Djaldi-Tabdi played professionally in France for a year with Flammes Carolo. The five-star recruit came to Syracuse to learn a different style of basketball and expand her skillset.

“All the things that she needed to work on were things that you could teach,” assistant coach Adeniyi Amadou said. “But all of her strengths were absolutely God-given.

At 6-foot-2, Djaldi-Tabdi has the size and wingspan that few players have, and she’s also mobile on defense, Amadou said. She has quick feet to guard on the wing, and her defensive instincts allow her to guard multiple positions.

Two years before arriving in New York state, Djaldi-Tabdi never planned to play college basketball. Syracuse began recruiting her while she played for Flammes Carolo. Amadou and head coach Quentin Hillsman discussed the difference between playing college basketball and playing professionally in France with her. SU would allow Djaldi-Tabdi to play a different type of basketball in a new culture, even though being a professional athlete immediately after high school was a “blessing,” Amadou said.

Amadou met Djaldi-Tabdi on a recruiting trip for Djaldi-Tabdi’s sister, who’s now a pro basketball player in France. The first time he saw her play came in Sopron, Hungary, where Djaldi-Tabdi played center for the U-18 French National Team in 2016 and experimented with power forward for the first time.

France won the U18 Women’s European Championship, as Amadou watched, after sweeping all seven of its games. While Djaldi-Tabdi averaged six points and 7.6 rebounds, coaches mainly relied upon her for defensive impact. 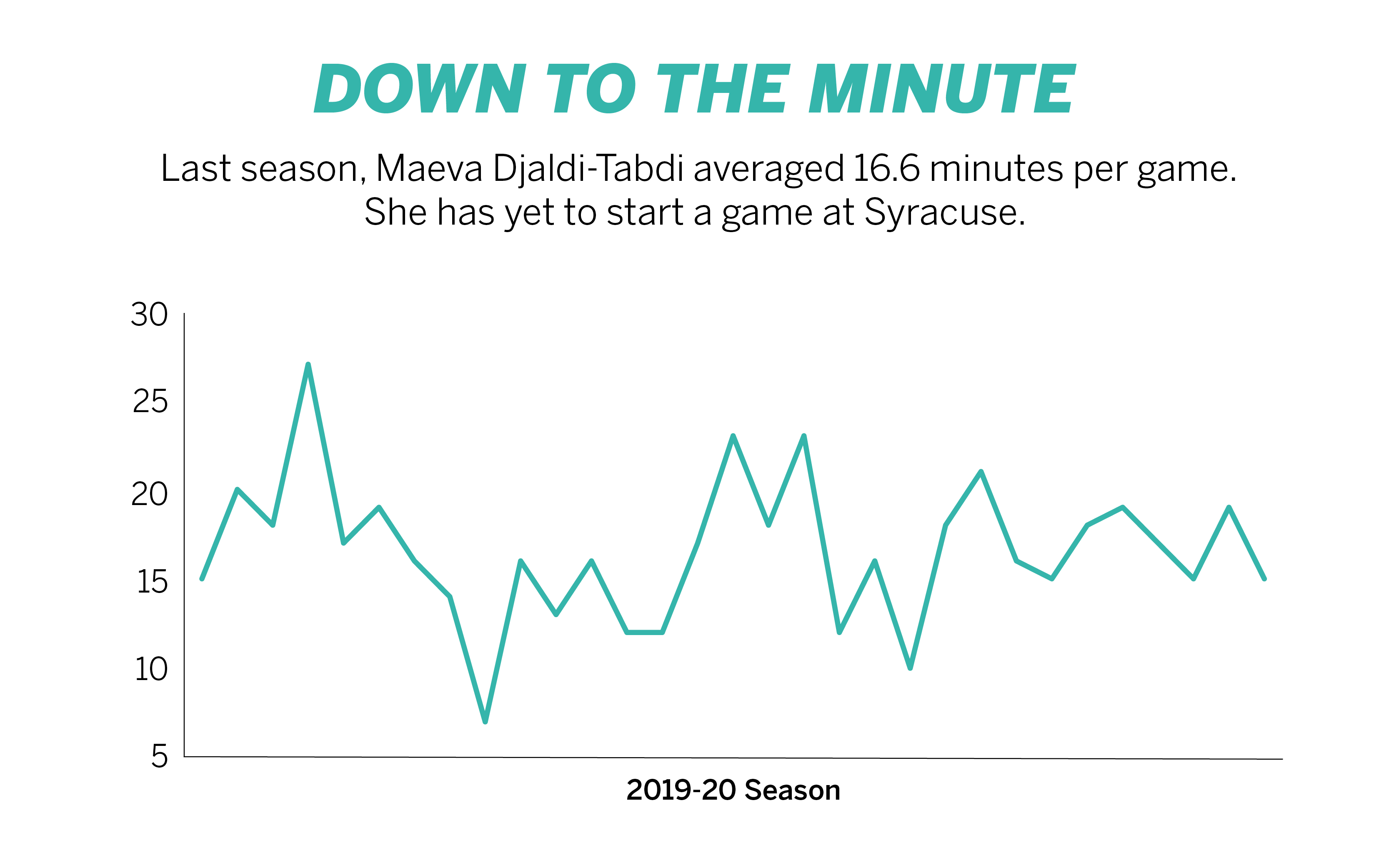 Amadou and Hillsman told her that she could have a larger role on offense if she came to Syracuse.

“She came from a structure where she was asked to play within a structure and play a tight role,” Amadou said. “The American game allows some freedom and some opportunity for the individual player to explore outside.”

Part of that freedom was an opportunity for Djaldi-Tabdi to improve her 3-point shot. While she didn’t emphasize her 3 in France, she always wanted to improve her range.

But for Djaldi-Tabdi, it was also important that her coaches have a relationship with her whole family. Syracuse called and spoke with her mother, brother and sister almost daily.

Eventually, Djaldi-Tabdi picked Syracuse over other colleges and a professional career. But once she arrived, Djaldi-Tabdi learned she was ineligible to play her first year due to NCAA rules.

“I was upset obviously because you should come here to play basketball, and you end up not playing,” Djaldi-Tabdi said. 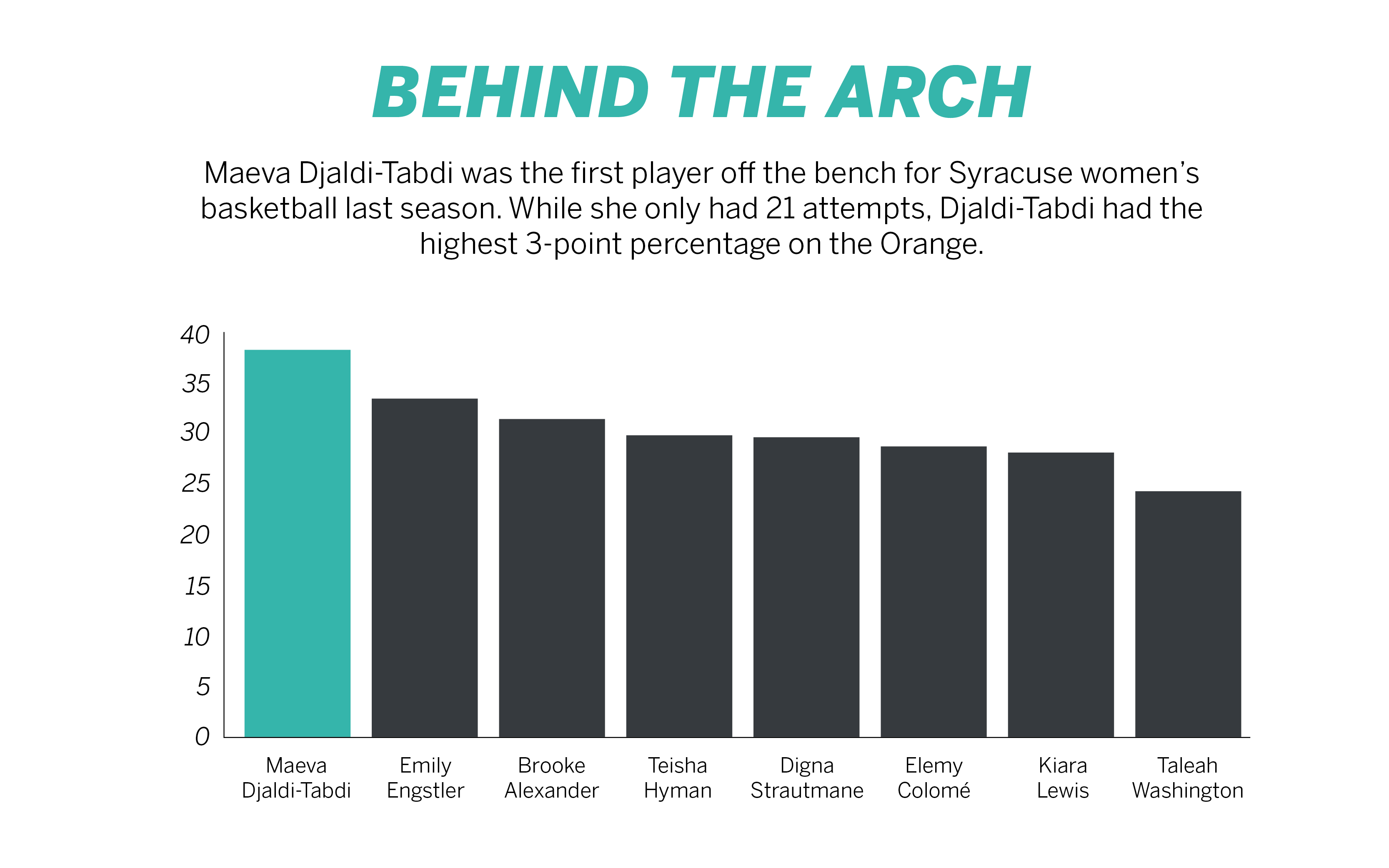 During her redshirt year, Djaldi-Tabdi inched out her range further and further. She also practiced post moves — including her best, the up-and-under — and improved her cardio.

In practice and in individual drills, Amadou wanted Djaldi-Tabdi to focus on post-moves. The French player wanted to work on her outside shot, a goal she had since she crossed the Atlantic Ocean.

So they compromised and worked on both.

“She really wanted to become a very versatile player,” Amadou said. “A player that is capable of having an impact anywhere on the floor.”

Djaldi-Tabdi began sliding lower on her drop steps and following through more on her shots, said Whisper Fisher, a former SU teammate. Earlier in the season, Djaldi-Tabdi might’ve used the wrong post-move on a defender or might’ve spun the wrong way. 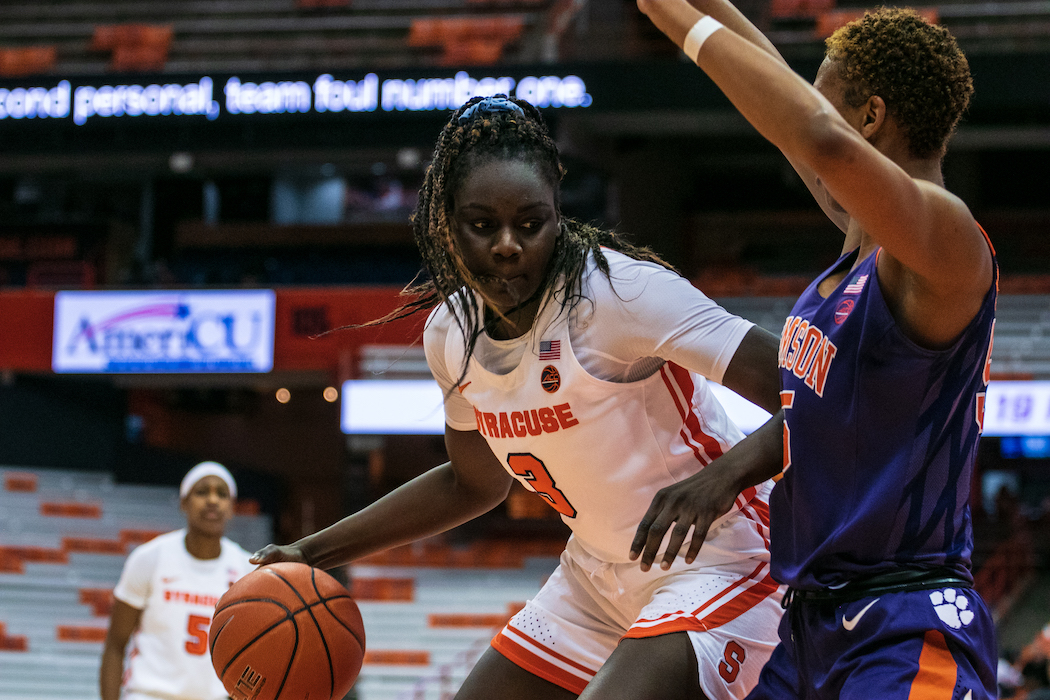 At Syracuse, Djaldi-Tabdi has worked on her post game and outside shot. Elizabeth Billman | Senior Staff Photographer

But as the season progressed, so did Djaldi-Tabdi. Teammates were ready for her to enter the game sooner, Fisher said.

“Maeva to me is like a game changer,” said Brooke Alexander, a Syracuse graduate transfer last season. “When she would come into the game, things would shift a little bit, she would score a couple of baskets consecutively, whatever it was. I mean, in my opinion, I think that she deserves more playing time.”

Last year, Syracuse often dealt with scoring droughts. But once Djaldi-Tabdi entered the game, she always seemed to hit a couple of shots, grab rebounds and head to the free throw line in the first 30 seconds, Alexander said.

Djaldi-Tabdi averaged 16.6 minutes per game, a slight decrease from her redshirt freshman season, and she still hasn’t started a game for the Orange. Alexander thinks if she played the minutes “she deserves,” she could have averaged a double-double. Djaldi-Tabdi was the only player from last year’s team who played and was of WNBA caliber, she said.

After complaining about practices earlier in her Syracuse career and dreading early wake-ups, Djaldi-Tabdi’s focus intensified. It’s resulted in a leadership role and an emergence of her potential.