CORAL GABLES, Fla. — Syracuse hadn’t given up yet down by seven with 11 seconds left. Joe Girard III drained a deep 3 on a long SU possession to cut the lead to four, and Symir Torrence intentionally fouled Charlie Moore, who made both his free throws. Cole Swider sprinted down the court and immediately answered with a 3, making it a one-possession game.

Hurricanes guard Isaiah Wong was fouled on the inbound, and with a chance to make it a two-possession game, Wong missed his first free throw, silencing the Watsco Center crowd. But Wong drained the second free throw, all but securing a win for Miami.

Swider ran down the court and banged in a long, buzzer-beating 3-pointer. But it didn’t force overtime. Instead, 10 second-half turnovers had led to a disappointing, one-point loss for Syracuse. The turnovers allowed Miami to come back from a 14-point halftime deficit and pick up a key conference win at home.

“If we didn’t have the turnovers, they would’ve scored 76 points or something and we would’ve won the game,” head coach Jim Boeheim said. “But the turnovers were the difference in the game. Period.”

Syracuse (7-7, 1-2 Atlantic Coast) dropped its second straight ACC game in a 88-87 loss to Miami (12-3, 4-0 ACC). The Orange began the game with a defense that looked like it had transformed overnight after its loss to Virginia, holding Miami to just 30 points in the first half. But whatever defensive progress Syracuse had made was lost in the second half as a season-high 19 turnovers put a strain on SU’s defense, allowing the Hurricanes to score 58 points in the second half, including 25 points off turnovers.

In a weekly ACC coaches’ Zoom call, Boeheim attributed Syracuse’s loss against Virginia to its defense, calling it a “disgrace.” But on Wednesday, the Orange came out looking like they had turned a corner defensively. Syracuse finished the game with a season-high eight blocks, but six of those came in the first half when it appeared the new-look defense would secure Syracuse a much-needed road victory.

Miami entered Wednesday having scored 91 and 92 points against NC State and Wake Forest, respectively, but had never scored more than 69 points against Syracuse since the Orange joined the ACC in 2013-14. Early on, it looked like that trend might continue, as the Hurricanes managed just 30 first-half points on 12-for-35 shooting. Wong entered the game averaging 16.5 points per game, but at halftime, he was held scoreless. 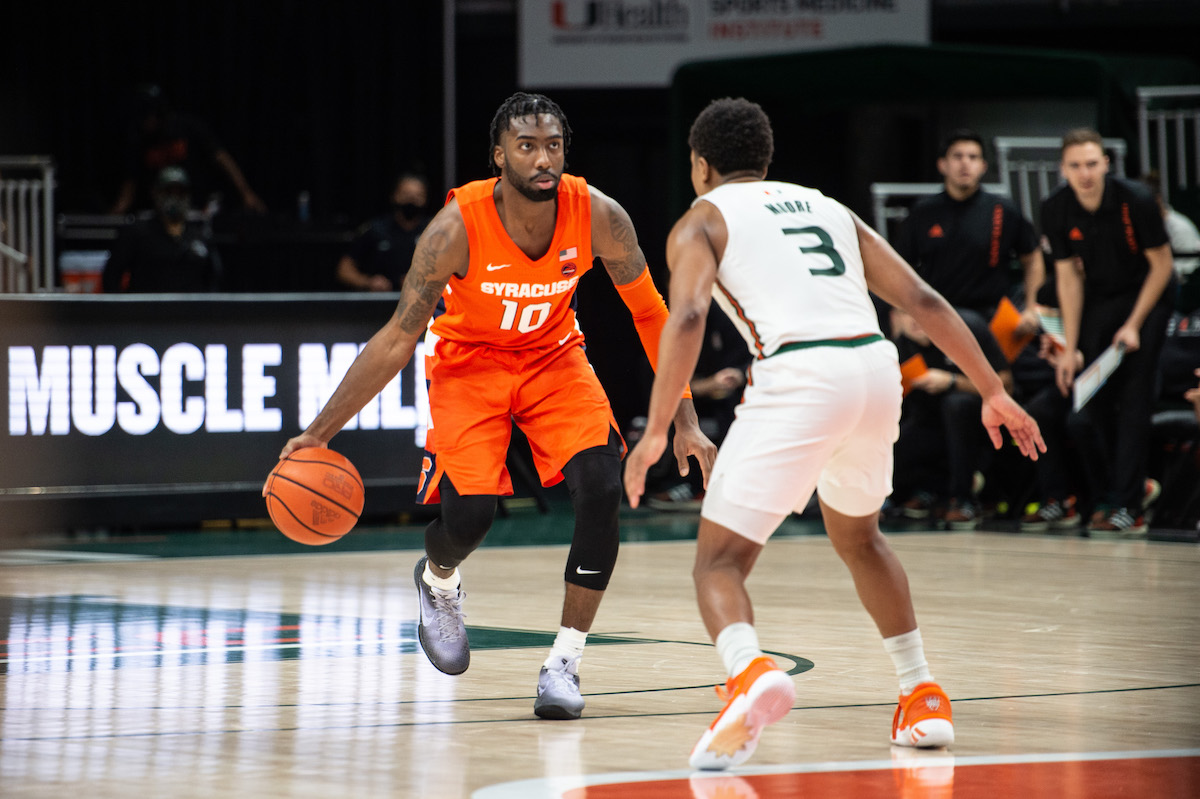 “Defense was better tonight for a long time,” Boeheim said. “But it was more the turnovers than anything.”

The Hurricanes stormed out of halftime with a full-court press to quickly cut Syracuse’s 14-point halftime lead to eight, with Sam Waardenburg and Moore each hitting 3-pointers 26 seconds apart, forcing Boeheim to call an early timeout.

“They changed the momentum of the game really early in that second half, and we just didn’t counterpunch with anything,” Girard said.

As Miami’s 3-pointers began falling in succession, Syracuse’s turnovers began piling up. On one play, Jimmy Boeheim dribbled his way into the corner and was soon trapped by two Canes defenders. He squeezed a pass to Jesse Edwards that went a little wide, and the center jumped to the floor to try and gather it. But two Miami players pounced on the loose ball, too, forcing a jump ball that gave the Hurricanes possession. Edwards finished with a team-high six turnovers, and despite scoring 22 points, Boeheim bemoaned his center’s tendency to hold on to the ball too long postgame. 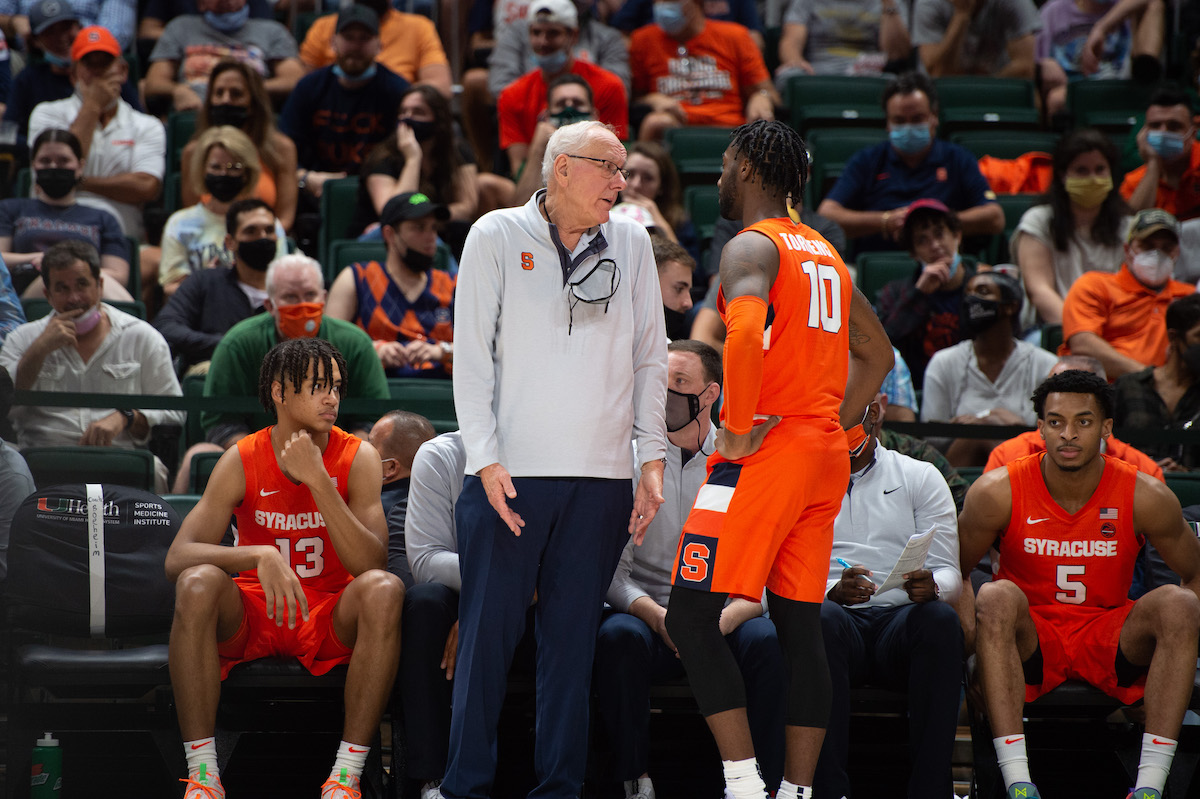 Jim Boeheim criticized his team’s defense on Monday, and the Orange allowed 88 points against the Hurricanes. Courtesy of Tessa Mortensen | Miami Athletics

Then, Wong was able to record his first points after Torrence drove into the paint but was called for a charge, resulting in an offensive turnover. After bringing the ball up, Miami found Wong open in the corner. Unlike he usually did in the first half, Wong didn’t rise up for a 3. Instead, he pump-faked to get past a defender before knifing through two more SU players with a Eurostep and scoring.

The Orange tried to respond, but Edwards again coughed up the ball. The center finished with 40% of his possessions ending in a turnover. As Wong gathered the ball in the backcourt, he dribbled down the right sidelines, gaining steam toward the basket. He rose up and finished through contact to score the bucket and get a foul called on Edwards.

On a night when the defense appeared to show significant signs of improvement and the offense scored 87 points, it was the second-half turnovers that handed SU another ACC loss and moved it back to .500.

“Tonight was the turnovers,” Girard said. “It just comes down to making those two, three big plays that you need in the game to overcome a loss like this.”