In his junior year of high school, Raiqwon O’Neal spotted the ball popping out from a cluster. The lineman scooped up the ball and hauled down the sideline toward the end zone.

Despite his 6-foot-4, 300-pound frame, O’Neal was fast enough to be a couple lengths ahead of every opponent on the field. Teammates and fans stood up, thinking O’Neal had nothing but the end zone ahead of him. Out of nowhere, OrTre Smith caught up to O’Neal at the 15-yard line and dove.

O’Neal stumbled and fumbled the ball. Wando (South Carolina) High School’s coaches threw their fists up on the sidelines in relief, and O’Neal had lost the one chance he had to score a touchdown.

“We talk about that all the time,” O’Neal’s high school teammate, D’Wuan Grainger, said. “If you know Raiqwon, you know (he) likes to run the ball.”

As a junior at Rutgers in 2020, O’Neal lined up at left tackle on a first-and-goal against Ohio State. Quarterback Noah Vedral called for the snap and began to run to the right. Instead of blocking, O’Neal subtly veered off to the left. Vedral turned back over to his left shoulder to find O’Neal wide-open on the left side. O’Neal caught Vedral’s pass and scored, pointing a finger up in the air after successfully getting a touchdown through a trick play stunt.

O’Neal’s trick play went viral on social media. Before that play, however, O’Neal already captured the attention and the respect of those closest to him for the hard work he showed on the field and the love he gave off of it. Now a junior at Rutgers, O’Neal was named honorable mention All-Big Ten last year and is in his third season as the Scarlet Knights’ starting left tackle. O’Neal and the RU offense scored 61 points in a season-opening win against Temple.

O’Neal initially dreamed of being an NBA player, his mother Dina O’Neal, said. He played travel basketball in Conway, South Carolina, growing up and was referred to as “Shaq” by his high school basketball coach, Michael Hopkins. Both Hopkins and Grainger, who also played basketball with O’Neal, said he could always be depended on for his energy and hustle on the court.

But during a football game in his freshman year of high school, after a play ended, the other team went after one of O’Neal’s teammates. Dina said O’Neal protected his teammate from the opponents, showing his aggressiveness on full display for the first time.

From that moment on, Dina knew O’Neal would be pursuing football. He continued to play basketball up until his junior year, which helped with his athleticism and footwork. His high school football coach, Carlton Terry, used him at multiple positions, ranging from defensive tackle to tight end.

But it was clear that O’Neal was best suited to be a left tackle, Grainger said. Grainger, who was the quarterback for Conway during O’Neal’s senior year, said he never had to worry about the side of the offensive line that O’Neal protected. 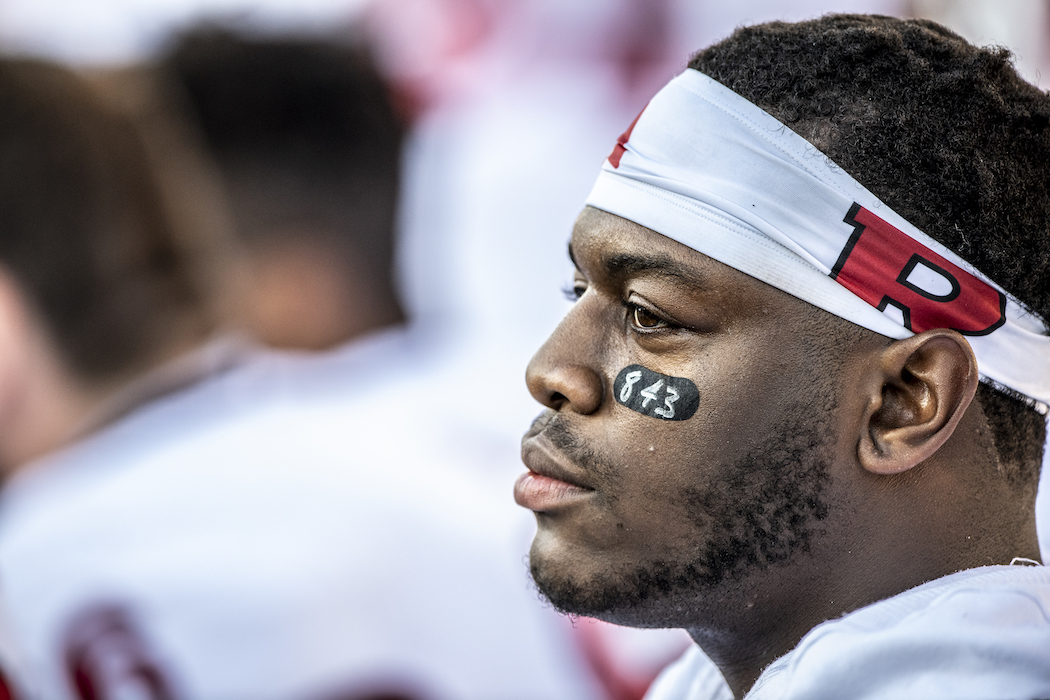 O’Neal and the RU offense scored 61 points in a season-opening win against Temple.Courtesy of Ben Solomon | Rutgers Athletics

O’Neal finished the season with 25 pancakes, a block that leaves a defensive player on his back, zero sacks given up and five sacks on the defensive side. His play earned offers from Michigan, Louisville and other Division-I schools, but O’Neal ultimately landed at Rutgers. One of the biggest factors in his decision wasn’t football, but rather the major that Rutgers offered — graphic design.

When O’Neal was younger, he would draw “Dragon Ball Z” characters and create other drawings that filled up the O’Neal household. Dina said his daily cycle consisted of school, sports, church and drawing. Dina’s father was an artist, and even though O’Neal never met his grandfather, Dina says he inherited his love for art.

O’Neal turned his passion into his own graphic design company. He and Grainger have also talked about a potential graphic design-related project for Conway — whether it was a T-shirt, pants or something else with a logo that O’Neal would create.

When looking out for his community and those closest to him, Grainger said O’Neal was a “protector.” O’Neal used to chase Grainger and his friends around after they provoked him for calling him a momma’s boy.

The South Carolina native, now in his final year of college, used those protective qualities to lead the Rutgers football offensive line — one that scored the most points in week one of college football in a 61-14 win versus Temple.

As one of his best friends, Grainger said he appreciates seeing someone like O’Neal in the spotlight now.

“We’ve seen Raiqwon take off from the jump,” Granger said. “That was just a great thing for us and the community we live in.”

The post Rutgers’ left tackle Raiqwon O’Neal becomes ‘protector’ on and off the field appeared first on The Daily Orange.