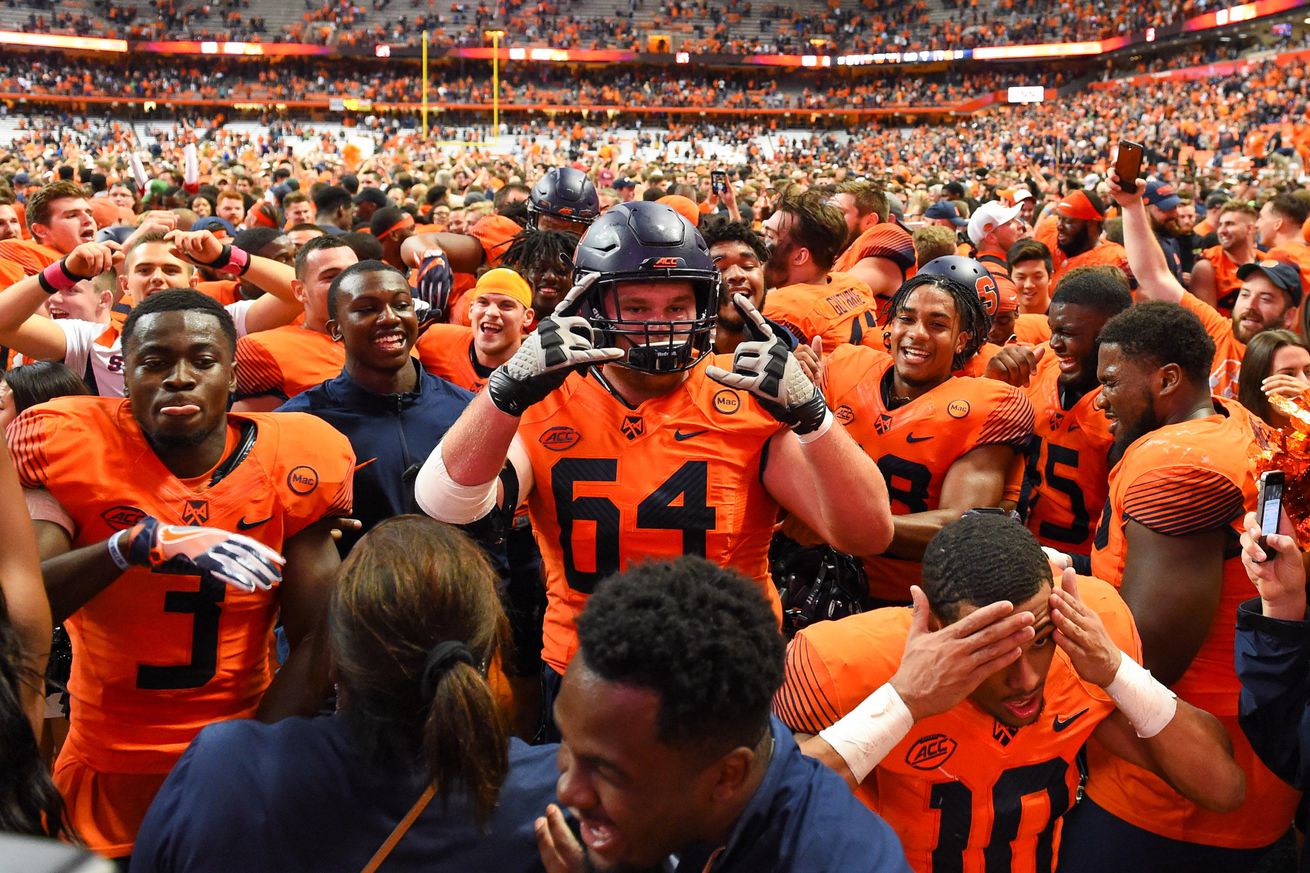 Or will you pick what’s behind Door #2

Last week Steven Godfrey of Banner Society wrote about the Kansas State Proposition. After the Kansas State Wildcats beat the Oklahoma Sooners for the second year in a row, Godfrey wondered if fans would sign up for a deal where their team beat the best team they face each season, but they also fail to win a conference title or compete in the College Football Playoff.

So what do you say Syracuse Orange fans? In 2017 we celebrated beating the Clemson Tigers but only won four games. The following season the Orange won 10 games but didn’t beat Clemson. Which did you find more rewarding?

Basically we’re asking if you’re signing up for this deal for the next decade?

Here’s what we would pick:

I’m passing on this offer. That moment in 2017 was great but the following season became much more enjoyable as a fan. I would take a deal that meant Syracuse lost to Clemson every season but that also enabled them to win at least six games. Being consistently better than average is what fans should want to see….wait it’s no fun. These recent basketball seasons have proven that sometimes you need to take the lows if you want to experience the highs. Syracuse isn’t going to compete for a National title the way college football is set up anyway. So I’m changing my mind, give me a win over Clemson for a decade. Let them go win national titles all those years knowing we made them hold that L.

Big wins are great, that’s not in question. But unless you’re Appalachian State, any amount of upset wins usually don’t define how a team is remembered and viewed. The upsets over Virginia Tech in 2016 and Clemson 2017 were nice moments, but nobody looks at those SU teams and thinks they’re great due to the amount of losses on their resume. Likewise, recruits aren’t necessarily going to choose a school because of one upset win. We’ve talked multiple times about setting up the Syracuse program for long term success and the way forward for SU is not relying on one big win in the midst of four or five win seasons.

To me, this deal only serves to satisfy a fanbase that is looking for a memory. Focus on turning the corner and fighting for conference championships. Settling for a nice moment in a season is not the correct move right now for a Syracuse program that needs more than an upset every season to attract fans and players. A conference championship would mean a lot more.

I’m going to go with the long term growth here. The program building would be well worth it compared to the annual shot across the bow of one of the big boys. Being able to punch up once a year, but never to make the playoff or the ACC Title game seems hollow. I loved when the Orange took out Clemson, knocked off Virginia Tech, etc., but I really think if that’s the ceiling, it’s more of a detriment to the program. There’s no carrot on a stick for recruits, there’s no target outside of “we beat Clemson” out there. Where’s the aspiration to draw in recruits and motivate your players? It’s in no way a bad option, but the hypothetical “Kansas State Proposition” doesn’t seem to be the best long term fit to build the Syracuse program, I need that silverware or at least the possibility of it.

I’m going to be the contrarian here and take this offer. Look: any realistic chance for Syracuse to get into the Playoff requires beating the modern Death Star that is Clemson and takes more than just a few capable players at a few key positions to run the table and win the conference championship. I’m not Syracuse can’t ever get there, but it’s going to require a significant overhaul of facilities and booster funding in both strategy and volume that would require so many structural changes at ‘Cuse. So with all of that, I will take a 9-3 ceiling, always beating Clemson and a Rival, going to some fun and different bowl games that make for great winter vacations. Sure, there will be frustration in ‘Cuse never taking “the leap,” but long term top half of the conference standing is nothing to sneeze at.

Now it’s your turn. Answer the poll and give us your reasoning in the comments.