Syracuse (8-7-2, 2-5-1 Atlantic Coast) finished its regular season on Friday with a 2-0 loss at Wake Forest. Aside from their first two games, the Orange went without a loss in nonconference matchups but struggled to close out conference games throughout the year.

Ahead of the first round of ACC Tournament play, The Daily Orange men’s soccer beat reporters reflect on where the team stands and what to expect from them in postseason play.

1. How have your expectations changed since the start of the season?

Alex Cirino: I was skeptical on whether or not Syracuse could rely on its 3-5-2 system against the nation’s toughest opponents. Early on, the formation was effective out wide and that generated most of its goals, but Deandre Kerr and SU’s other offensive threats weren’t getting quality service. The Orange’s play was too direct, and I believed it was going to hurt them come ACC play. But I credit Syracuse for using its size and speed — especially offensively — to take control of important games. Winning the wide game has contributed to many of its biggest results of the season. SU’s three-man backline has also held strong, and buildup through its defense has seen the team’s three center-mids become more involved in the buildup. The Orange have become more effective in all areas of the field, they’ve held true to their game plan regardless of the opponent, and they’ll be a definite contender as an underdog in the ACC tournament.

Anthony Alandt: Maybe last season was an anomaly. I had low expectations coming into the season that were lowered even more when I reviewed the challenging nonconference schedule Ian McIntyre put together. But Syracuse has held its own for the most part. Losing 1-0 to the No. 2 team in the country, beating Virginia on the road and upsetting Clemson at home show that this team can make a run if all goes well. I’m pleased with how Manel Busquets has burst onto the scene, and I love the depth from the bench. Francesco Pagano and Curt Calov — as freshmen — have given Syracuse quality weapons to sub in that hardly diminish the talent level on the field.

Henry O’Brien: When I joined the men’s soccer beat, Syracuse was 4-3-1 and already had an impressive win over Virginia and held then-No. 2 Georgetown to one goal. The Orange also had a 5-4 double-overtime loss against Louisville, however. In short, it was a mixed bag. I expected SU to take a step back and lose some of the tougher ranked conference competition like Pitt, Duke and Clemson. But while Syracuse went 1-2 in those three games, the Orange put constant pressure on their opponents and kept every match close. In those losses, the game-winning goal was scored in the final minutes of regulation and overtime. The win came against then-No. 6 Clemson in a 2-0 victory at SU Soccer Stadium. In every game in October, SU has been competitive and has had plenty of chances on attack. After returning from injury on Oct. 1, Kerr has scored just two goals, but Busquets has been able to carry the scoring load with four goals in the last month.

2. Outside of Deandre Kerr, who is Syracuse’s most important player for the rest of the season?

Cirino: Max Kent. Max Kent has been Syracuse’s most consistent defender this season. Kent uses his size to his advantage, his distribution out of the back is quick and direct, and most importantly, he has been the most vocal member of the three-man defense. But Kent is most valuable on set pieces — that is if he actually gets quality service in the box. Kent has scored twice this season, including a header off a cross that resulted from a quickly taken, short free kick. In Kent’s final season with SU, the grad student captain will have to emerge as its main leader on the field, using his size and physicality to win the necessary battles defensively, as well as igniting its play going up the field.

Alandt: Manel Busquets. Syracuse won’t win any more games this year if it only has Kerr as a striking threat. Having Busquets back from injury and with a ton of speed on the outside gives opponents another threat to think about. I was not a fan of a one-man offensive approach, one that ran almost entirely through Kerr, but that has changed as the season has progressed. Busquets is second on the team in goals, points and shots on goal. But Syracuse is still a mid-scoring ACC team in terms of goals per game. If they want to make a run and have a chance at a postseason at-large bid, the Orange are going to have to continue to utilize Busquets.

O’Brien: I would have to agree with Anthony on this one. Busquets has been great at generating chances and scoring goals for SU even when they are down a player. Since Kerr got hurt during the Louisville match, Busquets has led the Orange with five goals. Even during Syracuse’s most recent 2-0 shutout loss to Wake Forest, Busquets was the player getting shots on the net and keeping SU on the attack. The Barcelona, Spain native has remarkable speed and has easily beaten defenders on the ball multiple times. It will be crucial for the Orange to keep finding Busquets, as he has shown that he can deliver. But Kerr connecting on more shots and the increased presence of third-scorers like Calov are also important. 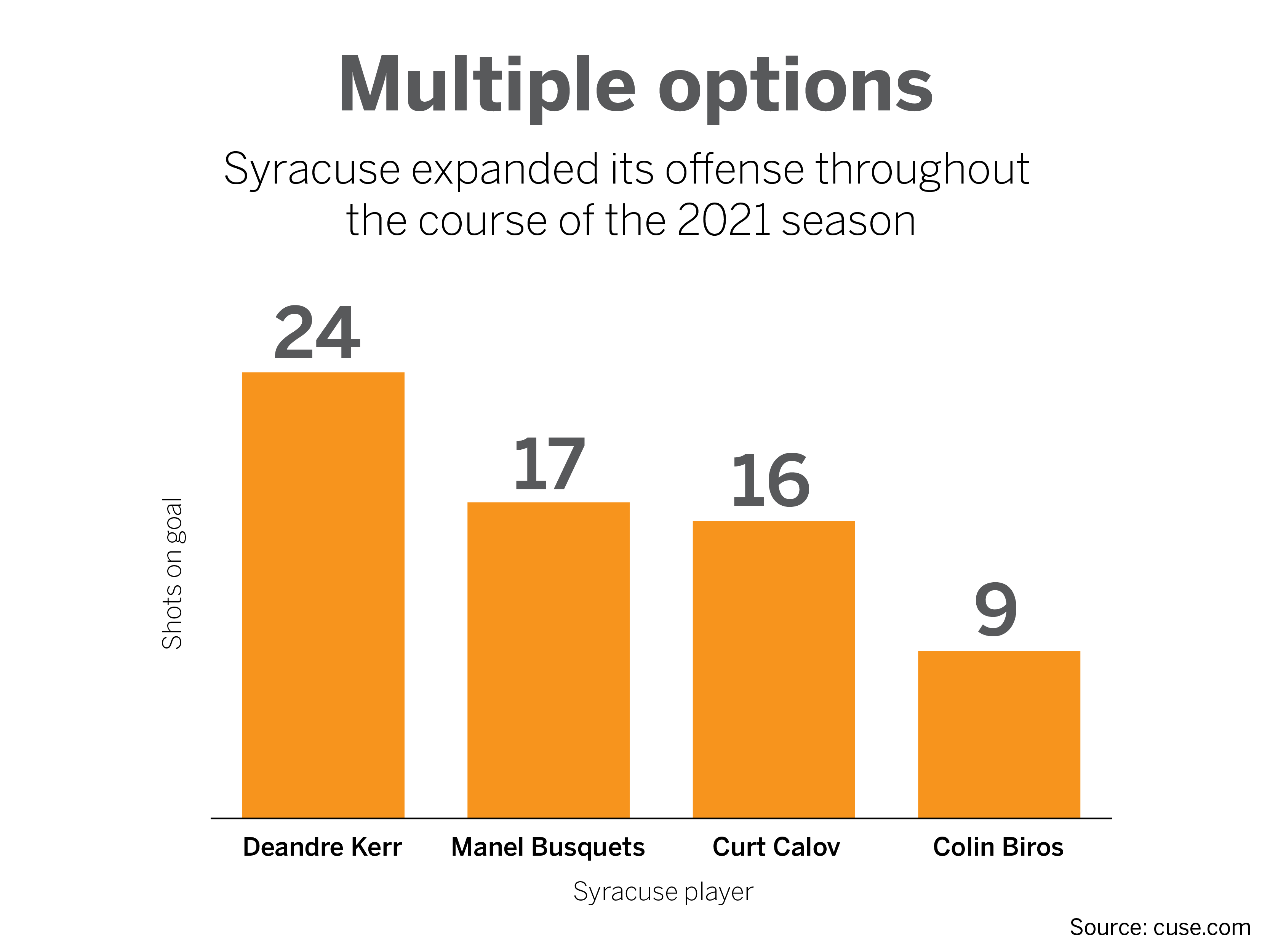 3. What’s one aspect of the Orange that’s disappointed this season?

Cirino: Syracuse has so many aerial threats, so why hasn’t it used that to its advantage on set pieces? Against Boston College, the Orange were awarded 11 corner kicks, but more than half of them were played short or backward and not into the box, where SU held a noticeable height advantage over the Eagles. Despite that and controlling possession the majority of the game, Syracuse took just two shots on goal and fell 1-0 on Boston College’s only shot. For a team that relies so much on service from its width during the run of play, you’d expect the same effectiveness on set-piece crosses.

Alandt: For a team that McIntyre believes harnesses a great deal of experience, they’ve made a ton of small mistakes that end up proving extremely costly. They’ve lost five games by one goal, two of which were overtime losses. Those are crucial points that — if swung the other way — could have catapulted Syracuse to a top seed in the ACC. Alex commended the backline’s play this year. They’ve been great, but a small lapse in judgment means Buster Sjoberg lets a wingback slip by. A small lapse means the goalkeeper has a terrible pass out of the net, and the opponent quickly pounces on it for a goal. Even after both of SU’s ties, McIntyre and the players say the biggest change they want to see is their mistakes cleaned up. Well, they’ve played 17 games, had some quality wins and heartbreaking losses. If those mistakes continue, it’s going to be an early exit.

O’Brien: It’s easily the fouls. Syracuse has 263 fouls and averages just over 15 a game, both the highest in the ACC. The team with the second-highest number of fouls in the conference is Virginia with 219. While the physical play of the conference will lead to more fouls, this number is too high. There comes a point where it is more than just a few bad calls by a referee in one match. Three separate times this season, the Orange have had 22 fouls in a single match. The effect of this number of fouls is obvious. They have stopped any attacks from progressing and/or put the opponent on the attack. SU can’t afford to give up over 20 fouls in any ACC Tournament match.

4. Which ACC opponent presents the biggest challenges in the ACC tournament?

Cirino: Despite Syracuse’s 2-0 home victory over Clemson, a rematch against a nationally ranked Tigers squad will be an uphill battle. As the tournament’s No. 2 seed, Clemson awaits the winner of No. 10 SU’s encounter with No. 7 North Carolina. Clemson will have three extra days of rest over Syracuse in a home game that likely won’t feature central New York-like climate. In last year’s abbreviated season, Clemson won the fall ACC Tournament as the third seed and defeated Pitt — then the nation’s top team — for an automatic bid to the NCAA Tournament, before losing in a penalty shootout to eventual national champions, Marshall. Twelve of the 15 Clemson players who featured in its 2-0 loss to Syracuse played in that third-round matchup against Marshall. Clemson is a team that knows how to be competitive when the stakes are high and has the chemistry that a transfer-heavy Syracuse roster doesn’t. 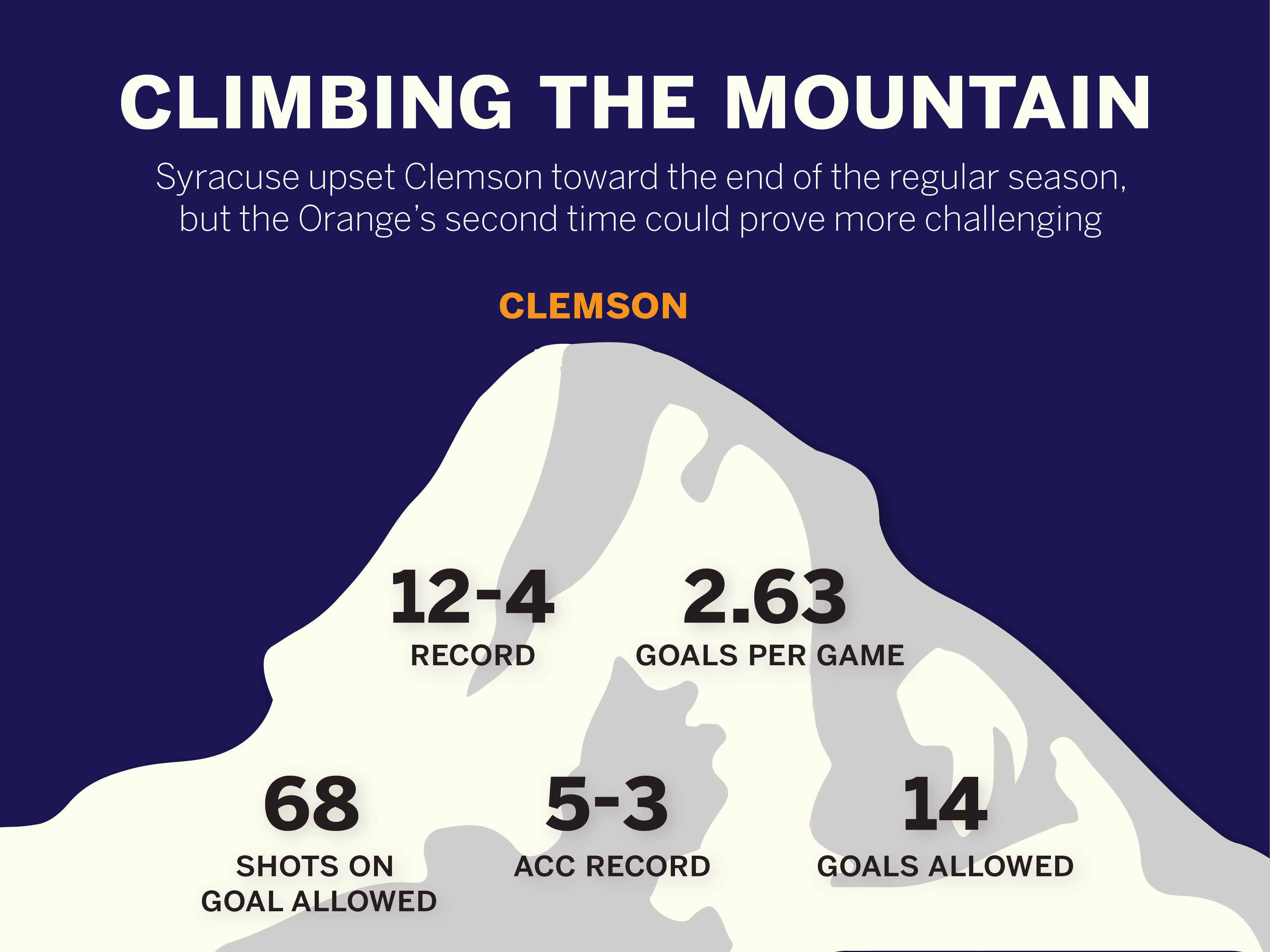 Anthony: Syracuse’s record is nearly identical to 2019, and in that year, it beat UNC twice, which means a rematch with Clemson is likely to occur. So I have to agree with my beat partner that Clemson will be the toughest challenge. Forty-eight teams make it to the NCAA Tournament, and Syracuse currently sits 44th in RPI, meaning a second win over the Tigers would almost certainly guarantee SU an at-large bid. But Clemson made it to the second round of the tournament last year, and they are a damn good team. Granted, since starting the year 7-0, they’ve gone 5-4, but a team with postseason experience compared to a Syracuse team glued together with freshmen and transfer players might prove to be an immovable mountain.

O’Brien: While North Carolina will provide a tough opening challenge for Syracuse, it has to be Clemson. The Tigers have five players who have over 10 points this season, the second-most in the conference. Clemson leads the ACC in goals scored with 42. It also has the second-most shots in the conference with 266 only behind Louisville. While the Orange’s 2-0 victory over the Tigers was most certainly impressive, Clemson will not be held scoreless for very long. With remarkable depth and talented scorers like Isaiah Reid and Luis Felipe Fernandez-Salvador, the Tigers will definitely be a tough out for SU.