At the beginning of every year, freshmen ROTC cadets stop at the Ernie Davis statue next to Hendricks Chapel during an early-morning run through campus. For Michael Hanuska, that stop came in 2016.

Syracuse’s then-lieutenant colonel paused to tell Hanuska, a SU club rugby player, and his fellow cadets how famous alumni like Davis and Jim Brown had balanced Division I football and ROTC, highlighting how closely aligned the university has always been with the military.

While still at the statue, the lieutenant colonel encouraged them to branch out like Davis did.

“The army of today is a diverse army where they don’t want single-minded leaders,” said Hanuska, a cadet of the Class of 2020. “If you’re all thinking the same and you’re all predictable, you’re always going to do the same thing, (so) it’s gonna be easy to defeat you.”

Syracuse’s 101-year-old ROTC program, the longest continually running program in the country, is currently composed of about 160 cadets. Among those, a select handful of cadets balance both ROTC and a sport — like Hanuska did, and like Division I athletes Michael Midkiff, a football longsnapper, and rowers Madeleine Gordon and Olivia Schaertl currently do.

But beyond the strenuous physical aspects of both programs, beyond the fatigue and the lost hours of sleep, are the leadership skills that translate to all aspects of life and the camaraderie associated with being a part of two “families,” Gordon said.

Early in the fall, ROTC focuses on individual skills like first aid, land navigation and weapons qualification, but the program shifts its focus to leadership skills about halfway through the semester. Cadets who are sophomores and older are assigned a position that requires them to execute leadership tasks multiple times per week, Waltenbaugh said. 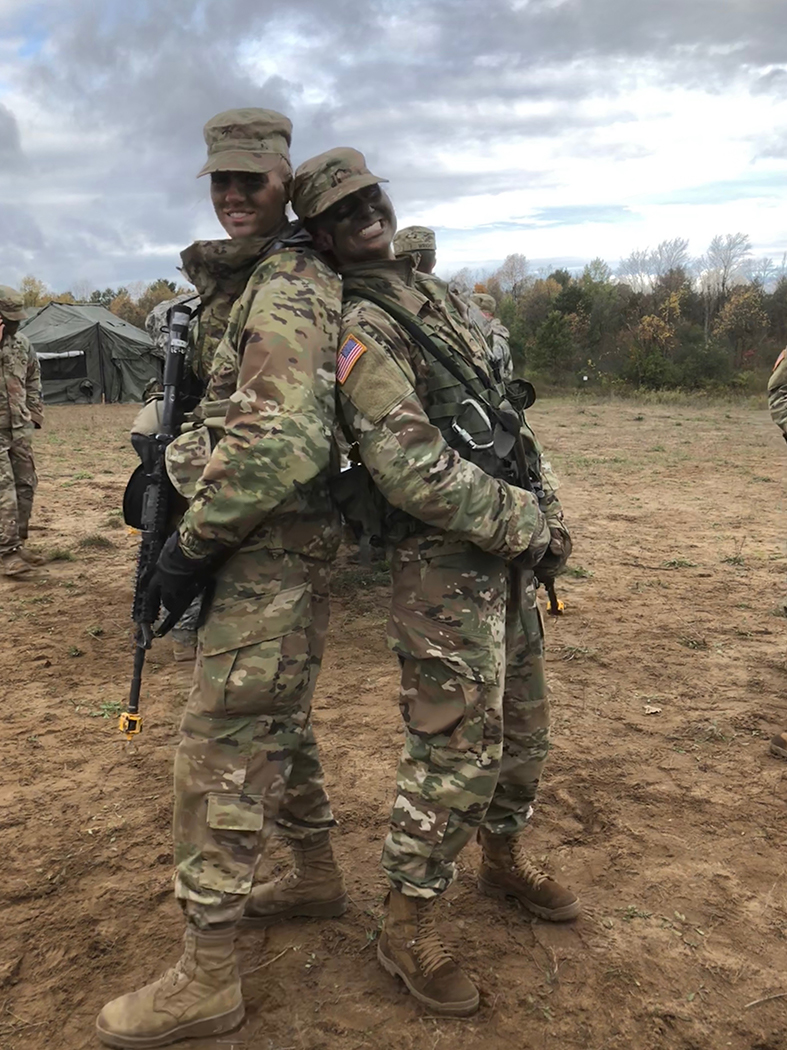 The key is to develop enough self-confidence to delegate and give orders, which is a daunting task, Waltenbaugh said. Firmly telling a peer “you go do this now,” is difficult, Hanuska said, because it feels more natural to ask “Hey man, you feel like doing this now?”

Cadets’ self-confidence is ultimately tested during a month-long summer camp in Fort Knox, Kentucky, the culmination of the ROTC program. Cadets are expected to execute tactics in unfamiliar territory and participate in a strict competition with a platoon of cadets they don’t know, all while being evaluated by an ROTC instructor they don’t know, either.

“If (you) can be an effective manager of 50 people employing multiple weapons systems in a wilderness area, what can’t you achieve?” Waltenbaugh said.

The leadership skills ROTC is continuously building translate particularly well to sports, Waltenbaugh said. The program teaches a certain level of trust and communication — crucial between teammates of any sport — and encourages cadets to pursue leadership positions everywhere they go, he said.

Both rowers, Gordon and Schaertl are cadets of the Class of 2022 and Class of 2023, respectively. ROTC leadership modules help the entire boat be perfectly “in tune,” which is essential, Gordon said.

With rugby, Hanuska and fellow cadet and teammate Nick Brincka said the discipline ROTC taught them earned them respect and trust from their teammates. Others on the team looked up to Brincka, who served for four years in the military right out of high school, Hanuska said.

Initially, the physical rigor of multiple daily workouts was tough and tiring, Gordon said. Instead of the typical three days of ROTC physical training a week, Gordon did six days as part of an additional program called Ranger Challenge. She also lifted weights in the morning for rowing and had afternoon practices at Onondaga Lake.

It’s worth it beyond words — I don’t even look at it as I’m not getting sleep, It’s my normal.

With ROTC physical training regularly scheduled for no later than 6:30 a.m. and rowing practices running into the early evening, establishing a routine for doing homework and managing time is crucial, Gordon said.

One time, Gordon woke up at 3:30 a.m. for a 12-mile “ruck” march — where ROTC cadets carry backpacks weighing 50 pounds or more — and then got on a bus to go to her rowing race at 8:30 a.m. Because of the sheer amount of exercise Gordon does, her sleep schedule makes her seem “like a grandma,” she said. She’s gone to sleep before 7:30 p.m.

“It’s worth it beyond words — I don’t even look at it as I’m not getting sleep,” Gordon said. “It’s my normal.”

The Pentagon mandates that cadets have the option to participate in activities like sports that make them more well-rounded, Waltenbaugh said. Athletes in-season can be excused from ROTC physical training, which is exclusively body-weight exercises composed of a cardio day, a core and lower body day and an upper-body day. 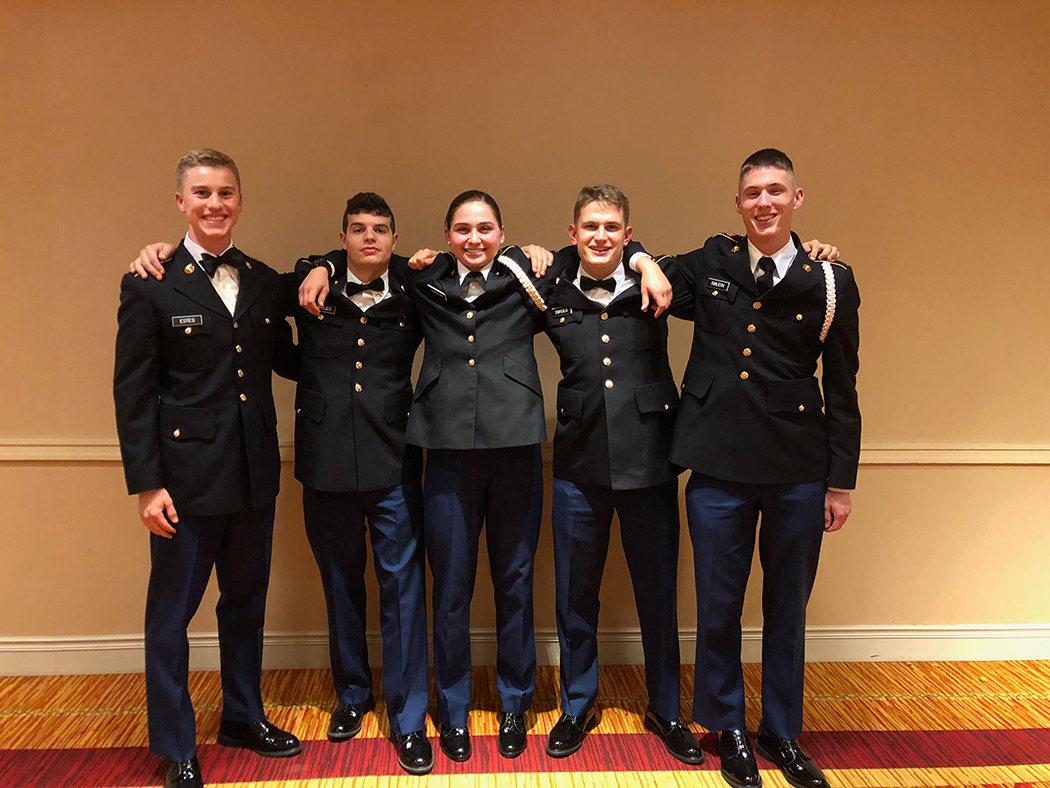 For Hanuska and Brincka, the two would take a day off from rugby if they had an Army Physical Fitness Test the following day, allowing them to rest and recover. Other times, they would skip ROTC physical training after a particularly rough game. Without that flexibility, doing both ROTC and a sport would be impossible, Schaertl said.

McKenna Pason, a Class of 2020 cadet, used to borrow workouts from ROTC physical training and bring them to the soccer field where she captained SUNY ESF’s team. If she liked something from ROTC — like routines with squats, burpees and lunges — and thought it might help her teammates, she brought it up.

“When I tell people that I did ROTC and soccer a lot of people think ‘Oh my gosh, that’s so crazy,’” Pason said. “But I love playing soccer, so that was pretty easy for me… And then ROTC obviously was my future, so you kind of look at it as, ‘This is my career.’”

For many cadets like Pason, Gordon and Hanuska, the military is paying for their education at Syracuse. In return, they participate in ROTC and four years of service after graduation. Brincka came to Syracuse after four years of service and, after spending the last four years in ROTC, is now on track to become an officer. Many have family members who served and have dreamed of serving since they were young.

Both sports and the army build strong bonds because teammates have to go through hardships together, Hanuska said. He remembers one of his instructors who used to say “the army is the greatest fraternity in the world,” because wearing the same uniform makes everyone brothers and sisters.

“With rugby, you forge bonds with other people, when we’re on the field together, everyone’s getting beaten up and miserable,” Hanuska said. “It’s the same with the military, you’re out in the field freezing your butt off and that makes you close the person next to you.”