iana Mangakahia got the ball on the wing and drove baseline. The nation’s 2018 assist leader found herself in a familiar situation: one defender on her left hip, another between her and the basket and seconds to make a play.

With her right hand, the Australian whipped a no-look pass behind her head. The pass hit her teammate in stride, guiding them to an uncontested layup, and the crowd was ecstatic. A frustrated opponent quickly gathered the ball on the baseline and barked at their teammates to push back up the floor.

But Tiana wasn’t playing for Syracuse. On a hot, sunny afternoon in August at Jamesville-Dewitt Middle School, this play didn’t count for anything beyond a few “Oohs” and “Aahs” from teammates and onlookers eager to form the next team of five.

Tiana began playing pickup basketball games three days a week after she was diagnosed with stage 2, grade 3 breast cancer in June 2019. The games, which she played until Syracuse began practice on Oct 16, fueled her return to the Orange. She’s joining the team for a fifth year after receiving an NCAA eligibility waiver on Oct. 2, and she was declared cancer-free in November 2019.

She expects SU’s season to end with a trip to the national championship and a first-round WNBA selection. But to her, the exhibitions have meant much more.

“During chemo and everything, pickup gave me an outlet where I didn’t think about what was going on,” Tiana said. “It helped me stay focused on my goal.”

She’s the school leader in assists (591) after just two seasons, and she’s now tasked with leading a No. 23 Syracuse team that’s advanced beyond the NCAA Tournament’s second round just once in program history.

“Her talent has no limits on what she can do going into this season,” said 14-year head coach Quentin Hillsman. “I just can’t imagine her, barring some kind of setback, not having a fantastic year.” 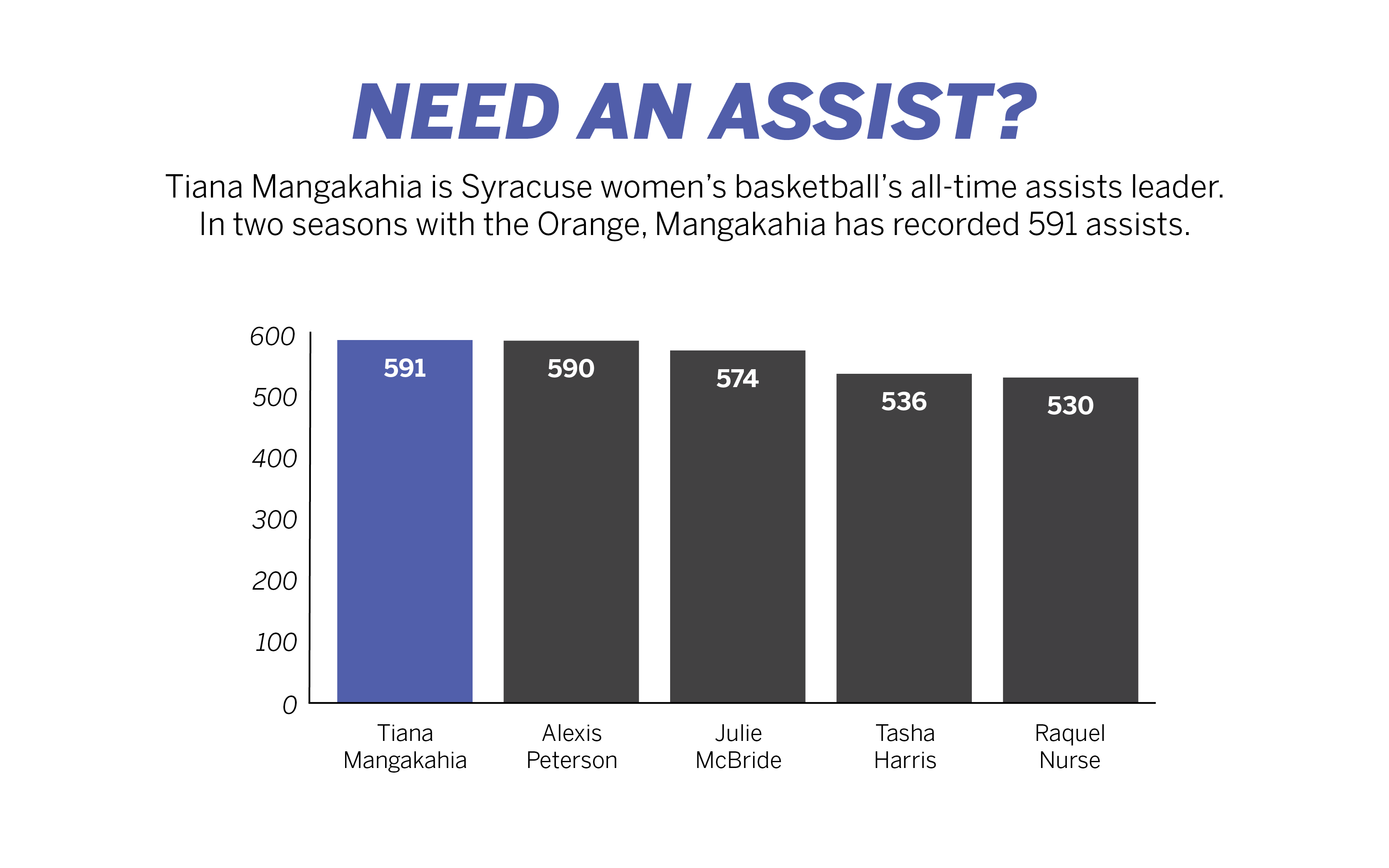 From July 5, 2019 to Oct. 11, 2019, Tiana received eight rounds of chemotherapy at St. Joseph’s Hospital Health Center in Syracuse. Because she wasn’t able to practice with teammates at SU’s Carmelo K. Anthony Basketball Center, the All-American Honorable Mention point guard turned to recreational play at SU’s Barnes Center at The Arch or in nearby parks.

Less than six months after Tiana was named one of the top five point guards in the country, she was playing pickup with anyone who’d let her join — former high school players, SU football players or people trying to get some exercise. Back in Australia, Tiana played basketball exclusively with trainers, teammates or family members. Pickup games with strangers were a new concept that she didn’t experience until she came to the United States in 2015.

“I kind of liked it,” Tiana said. “Playing in Melo is regular to me. So playing in Barnes, playing in JD was nice to meet new people and playing the sport you love with people who love playing it.”

Just getting through a game was monumental for Tiana at first. Most five-on-five games were played to 11 points, with 2-pointers counting as one and 3-pointers as two, and Tiana often felt herself getting dizzy by the time one team reached four. Those playing with her knew her limits, and her team always carried a sixth player to sub her in and out.

“It would just depend how I felt,” Tiana said. “Most of the time I couldn’t finish the game.”

Upon being declared cancer-free, the pickup games shifted from a treatment distraction to a channel for improving her skills. If Tiana saw someone execute a move that wasn’t already in her repertoire, she’d ask them to teach her. The biggest addition was the Euro step, which helped absorb contact from or entirely evade players such as Syracuse’s 6-foot, 288-lb fullback-turned-lineman Chris Elmore.

Tiana considered the risk associated with pickup but played anyway. She would, however, step out of the way on defense when “other dudes who don’t know basketball” drove at her full force. Regardless, she still had her own “season,” keeping her three-day-a-week schedule while Syracuse (16-15) was in the middle of its worst season since 2006-07. 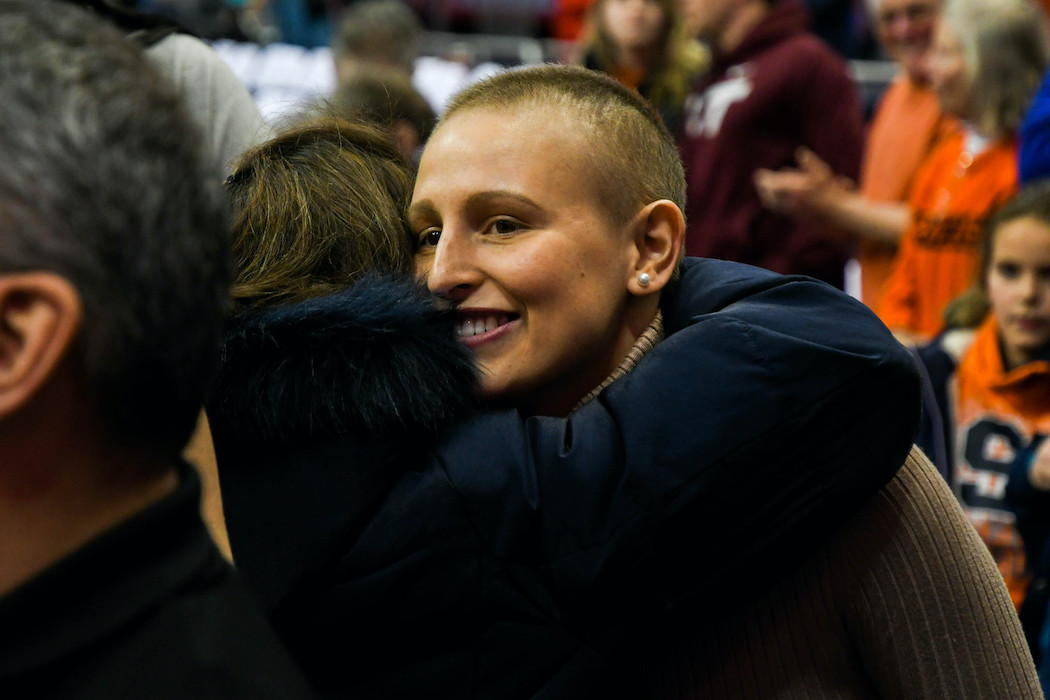 On Feb. 24, Tiana’s progress allowed her to resume practicing with the Orange. Her return lasted just over three weeks before SU shut down its campus due to COVID-19. She headed back to Brisbane on March 12, where pickup basketball was replaced with activities permitted by Australia’s “stay-at-home” order, including bike rides, runs and one-on-one games against her siblings.

“When she came home, she was so positive about her life,” Tiana’s brother Brandon Mangakahia said. “It’s so easy when we have trials in our life to feel sorry for ourselves, feel sad and get stuck in those mindsets. But she was so happy.”

Back in high school, Tiana established her three-day-per-week training schedule, working out on Monday, Wednesday and Friday with trainers and her team. In college, she’d text those trainers to let them know when she was back in Brisbane.

When she wasn’t doing mandatory workouts or practices, Tiana played with Brandon or one of her four older brothers in their yard. Brandon, the youngest, often found himself standing under the basket, rebounding for Tiana as the 88% career free throw shooter took 100 straight from the charity stripe.

“(I) still enjoy that because she gets swishes after swishes, so we’re just like, ‘Sweet, we’ll rebound,’” Brandon said. 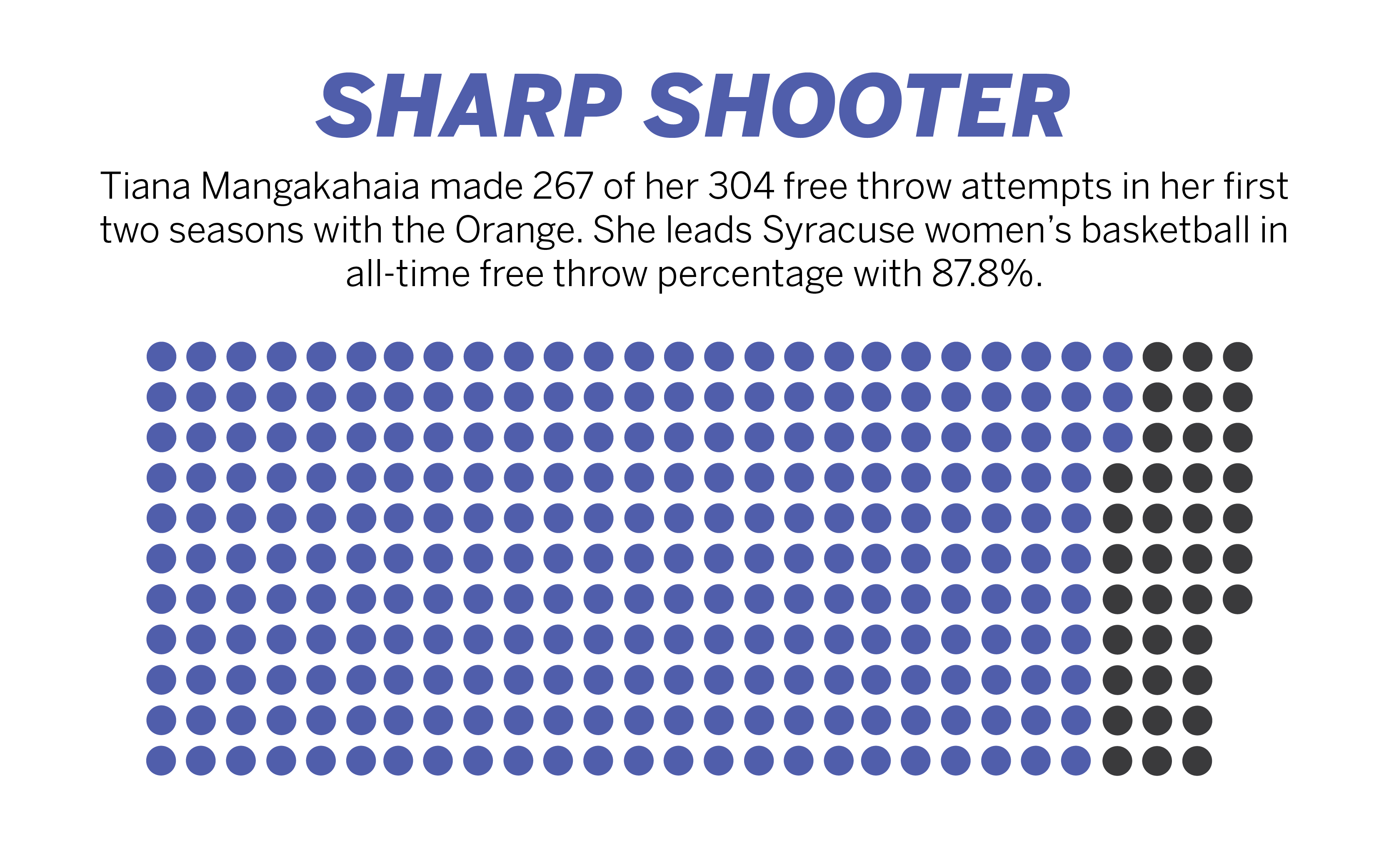 While Tiana and her family relished being at home together again, there wasn’t any substitute for the competitive outlet that pickup provided the point guard. Tiana returned to Syracuse in late June and quickly resumed play at J-D Middle, Jamesville’s Tecumseh Elementary School and wherever hoops remained up.

Teammates joined her because it was the offseason. Tiana improved her rapport with fellow veterans Emily Engstler and Digna Strautmane and built chemistry with 6-foot-7 freshman Kamilla Cardoso.

“I think she’s a great leader,” Cardoso said. “She push(es) all the players to go hard.”

Tiana’s eligibility status for the 2020-21 season remained in limbo, but the same goals sat at the front of her mind during every pickup game: win Syracuse a national championship and get drafted in the WNBA’s first round. And in October, the NCAA’s waiver made both possible.

It’s the first time the Orange have been ranked in the AP Top 25 since November 2019. At 25 years old and SU’s eldest player, Tiana’s ready to fill that leadership role. The fifth year’s independence stems from a lifetime of experience — being an only sister, living thousands of miles from home, beating cancer or simply being the lone Division-I athlete on a central New York street court at times.

The post RETURN TO FORM: After beating cancer, Tiana Mangakahia’s return to lineup began with pickup appeared first on The Daily Orange.