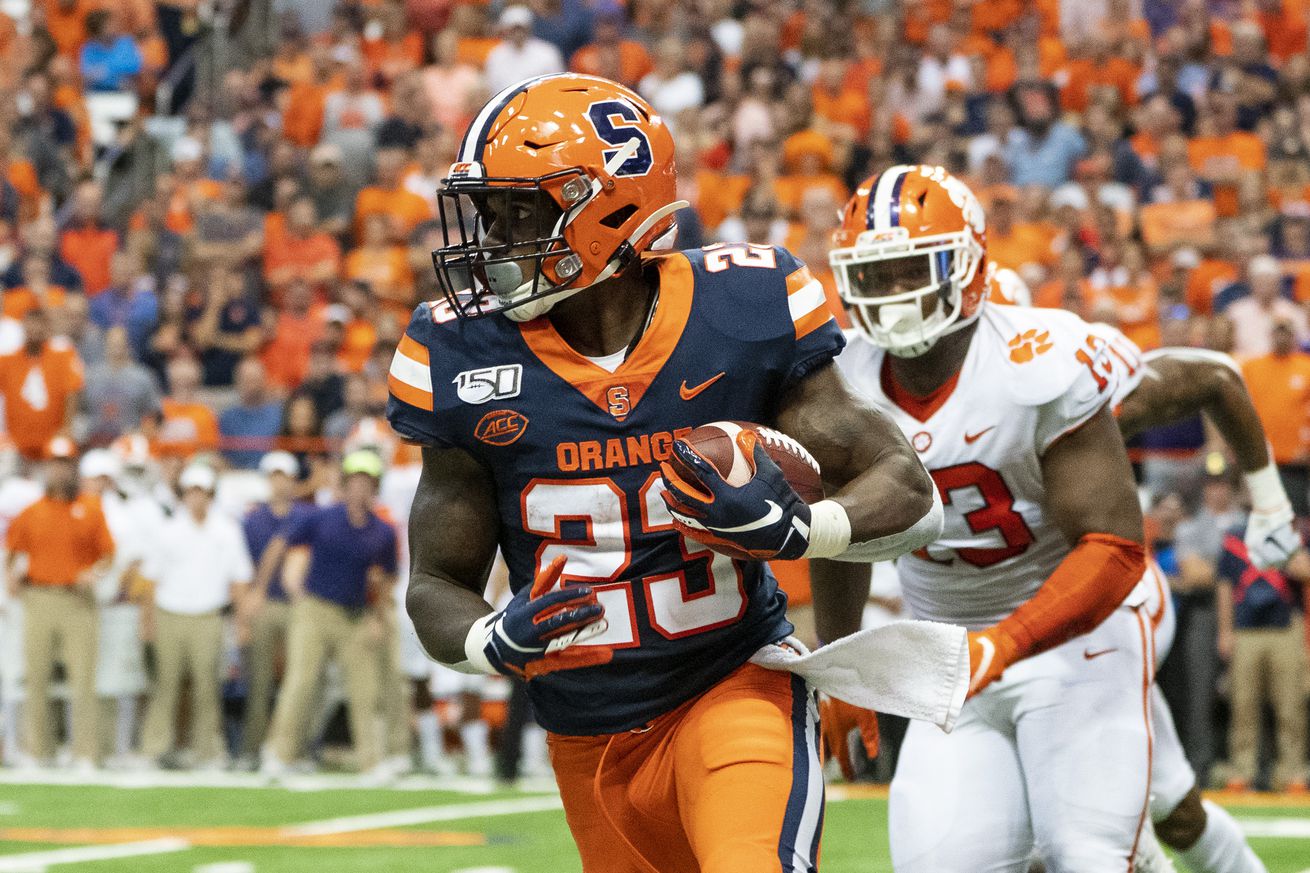 When the initial depth chart for the Syracuse Orange was revealed on Monday, many people were surprised to see some of the names that weren’t included. This afternoon, we got some information on why those names weren’t on the two-deep. The Athletic’s Matthew Gutierrez was first to tweet out that Abdul Adams, Jarveon Howard, and Tyrell Richards all decided to opt out of the 2020 college football season, according to a source.

Syracuse RBs and presumptive 1-2 punch Abdul Adams and Jarveon Howard, as well as LB Tyrell Richards, all have opted out of the 2020 season, source tells @TheAthleticCFB. They join DL Cooper Dawson in opting out.

Opportunities for Jawhar Jordan and Markenzy Pierre at RB.

This is a big blow to Syracuse for the 2020 season, as Adams and Howard were expected to control the first and second spots on the depth chart at running back for the Orange. The duo were the leading rushers returning to SU, with a combined 673 rushing yards and six rushing touchdowns between the pair. Both were expected to offset the loss of Moe Neal due to graduation.

Without Adams and Howard, Dino Babers turns to redshirt freshman Jawhar Jordan as his primary ball carrier for 2020. He showed flashes of brilliance throughout his allowed four games in 2019, particularly in the open field. His backup is redshirt junior Markenzy Pierre who only attempted 27 rushes in his first three seasons with the Orange.

The loss of Richards on defense will be felt for the whole season as well. The redshirt junior had recorded 30 tackles, six tackles for loss, four sacks, an interception, and a fumble recovery in two seasons of playing time. He was expected to be the anchor and experienced leader for a linebacker group which is going through an upheaval after the graduations of Andrew Armstrong and Lakiem Williams.

SU’s linebackers are now led by former four-star recruit Mikel Jones, who as a sophomore has the most game experience out of any of the starting linebackers with 12 games played in 2019. He’ll be looked upon to be the leader Richards was expected to be for the linebackers in the new 3-3-5 defensive scheme. Fellow starter Geoff Cantin-Arku only has nine games of college experience and Stefon Thompson jumps into the starting lineup as a true freshman. The youth of the linebackers — a key part of the 3-3-5 — will be tested often throughout the 2020 season.

With today’s news, Syracuse now has four players that have opted out of the 2020 season (Cooper Dawson was the first in early August). Keep in mind that the ACC confirmed earlier on Tuesday that any player that decided to opt out of the fall sports season will keep their scholarship and retain their year of eligibility. That means Adams is still a redshirt senior, Howard is still a junior, and Richards is still a junior come 2021.

Something to note also is that we aren’t aware of the reason why these players opted out of the season, and at this point that shouldn’t really matter. Given the safety concerns around COVID-19, players have been granted an opportunity to do what they feel is best for their own well-being, and have every right to exercise those options.

However, Syracuse’s task of rising up the ACC ranks gets even tougher without the firepower of three of its key contributors. We’ll see how this somewhat depleted Orange squad looks in its first game on Saturday at North Carolina.