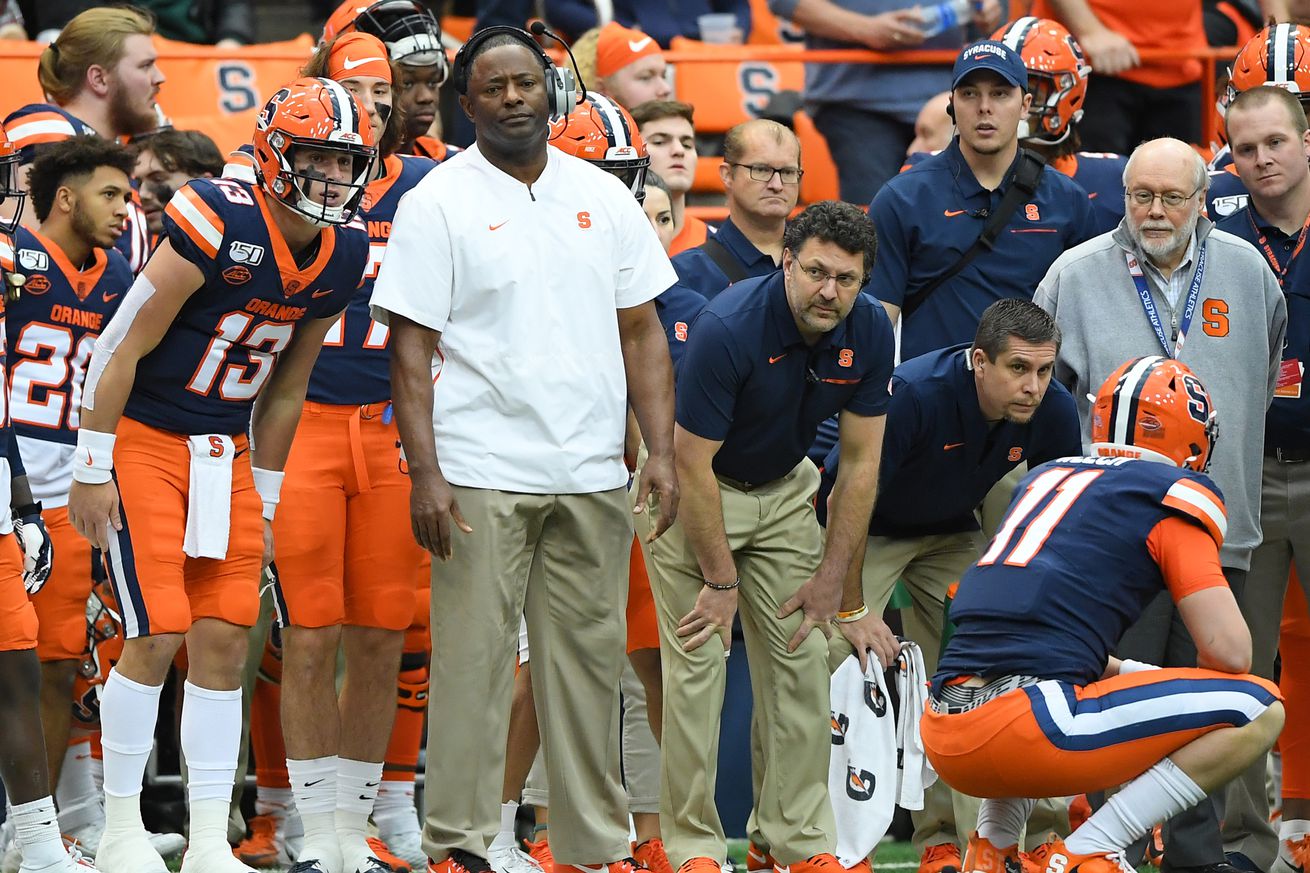 Dino Babers and the staff have risen to the occasion given the challenges.

The Syracuse Orange football program is in an interesting spot right now, having been unable to do much in-person recruiting this year, yet they could wind up with one of their best classes since Dino Babers arrived. They’ve also managed to get 18 commitments already, which is a higher number for SU at this juncture. Part of that comes from the general uncertainty around the country. But there’s also the factor that it’s harder to flip already committed players without the in-person sell.

Over at the Daily Orange, they took a look at the virtual recruiting process, talking to a couple recent commits about how admittedly odd the process is, with many of them pledging to the Orange sight unseen. That fact’s probably assisted Syracuse in securing two commitments from Hawaii this time around too. Assuming they wind up signing, Austyn Kauhi and Kalan Ellis would be the first two Hawaiian scholarship players in program history.

Last week, Babers also shared how the current dynamic takes him back to the way recruiting used to be. Considering SU’s recruiting results “back in the day,” when the Orange(men) were a fixture in and around the top 25, this is at least one potential positive of the current state of affairs.

That, plus the rest of your Syracuse-related links below.

“It kind of goes back to old school where you have to watch tape, call high school coaches, call people in areas that may have seen these young men play to get the best evaluation of them that you can,” Babers said. “You’re not getting the opportunity to see them in camps, in combines, to make the best decision that you can.”

“I knew I wanted to try to stay involved. I had just given so much time and effort for four years to the program,” Belbey said. “But I didn’t know the best way. I didn’t have the time to still be a manager every day.” It was during his first year at law school when Belbey was first introduced to TBT. A friend he knew from home in New Jersey mentioned the creation of a new, winner-take-all tournament and pitched the idea of a Syracuse alumni team.

No year in college football will be more memorable than the one we are experiencing now, as the impact of COVID-19 has forced most colleges to cancel the 2020 fall football season with the hope of trying to play in the spring. We aren’t here to give you our opinion on whether they should or should not have played in the fall, nor are we going to do that with their attempt to play in the spring. Instead, we want to shine a light on the players who deserve credit for the performances they have put forth over their college careers.

Adults failed our young people, and now we’re going to blame them for it (Syracuse.com)

Universities, including my own, are engaging in “magical thinking” that we can bring students back from cities and towns across the country and not spread Covid. Local and state officials are allowing this to happen. We knew that there would be groups of Syracuse students (and students at other colleges) who would do this; if we didn’t want it to happen, we would not have opened.

He was credited with 23 pass defenses (including eight interceptions) in 49 games played, as well as five fumbles (three forced, two recovered). What’s interesting is that Fredrick also ran with the special teams units throughout his Syracuse career, experience which should help his odds of catching on with an NFL roster.

COVID-19 vs. the SEC, ACC and Big 12 and why they’re kidding themselves (NBC Sports Pacific Northwest)