Three points from victory, Marcus Keene frantically waved his hands over his head as he stood behind the 3-point point line at The Basketball Tournament. With Sideline Cancer nearly at the 65-point Elam Ending threshold, Boeheim’s Army was crumbling.

After receiving the cross-court pass on the right wing, Keene rose to shoot while John Gillon and Andrew White III stretched to defend. And for the fifth time that Saturday, Keene’s shot hit nothing but net.

Once Sideline Cancer’s 65-48 blowout victory over Boeheim’s Army was complete, guard Eric Devendorf dropped his head and trudged off the vacant Nationwide Arena court in Columbus, Ohio. With its bags packed before tip-off due to COVID-19, BA left the Columbus hotel immediately.

As the No. 3 seed in TBT, Boeheim’s Army was expected to surpass its quarterfinal exit to No. 22 Sideline Cancer. Before the tournament, Devendorf said that BA was as talented as any other team seeking the $2 million prize.

But seeding took place before BA found out that big Tyler Lydon wouldn’t play after injuring his hip and other big Chris McCullough grieved the death of a friend. Without them, Donte Greene was one of two players over 6-foot-8. General manager Kevin Belbey added former Colgate star Will Rayman, whose inexperience with the 2-3 zone defense meant he played a reserve role. BA struggled to rebound in both its games, forcing a defensive shift that doomed BA’s quest for its first TBT championship in its sixth try.

“Chris McCullough being an athlete at 6-foot-11 with NBA skills, (he) could have made a difference, you never know,” head coach Ryan Blackwell said after his team was eliminated.

For months, there was uncertainty if a tournament would take place due to COVID-19. For Belbey, that meant his team recruitment “might be a waste.”

Once TBT decided to play solely in Columbus — a decision announced three weeks before the first game —  Belbey said it was the easiest year recruiting players since the Syracuse alumni team’s formation in 2015. With professional sports paused across the world, TBT represented an opportunity to experiment with the first sports bubble.

Participants completed multiple COVID-19 tests, both pre-arrival and during the tournament, and were isolated on hotel floors. They couldn’t leave the hotel, pick up their own food orders or practice in the ballroom-turned-gym outside of their allotted time.

“These guys on our team are like everybody else in this country,” Belbey said before TBT. “They’ve been sitting around on their couch watching Netflix for the last few months and they’re bored.” 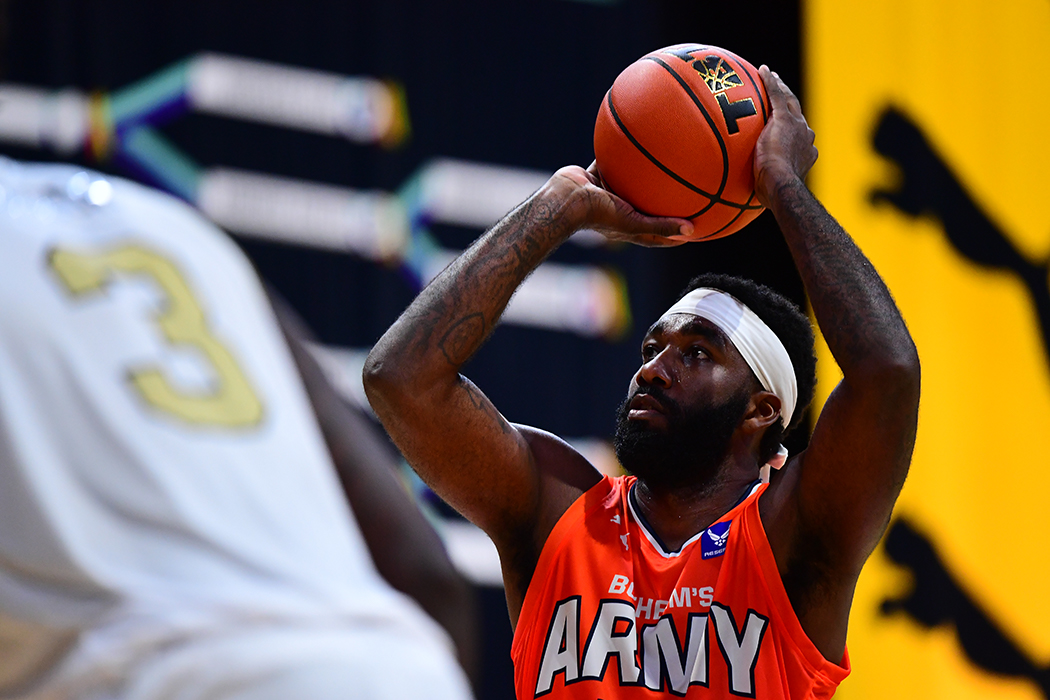 Belby’s roster construction plans were to recruit versatile, young forwards. Not only were Lydon and McCullough rim protectors and rebounders, but both players could stretch the floor and knock down 3s. Without the pair, those plans fell apart as Boeheim’s Army was outrebounded by Men of Mackey when their center, Isaac Haas, collected eight rebounds.

Heading into TBT, Boeheim’s Army aimed to stretch defenses with strong shooters, Devendorf said. But against Men of Mackey, BA converted less than 20% of its 3s — even as it held off the Purdue alumni in the Elam Ending. Boeheim’s Army shot even worse from distance versus SC, making just four of 27 attempts.

On the defensive end, BA planned to use the 2-3 zone, which Nichols called a “blueprint” that helped most of the Syracuse alumni rotate through seamlessly. But in the second half against Sideline Cancer, Boeheim’s Army switched to man-to-man defense — a similar abandonment it made while trailing in previous TBT games.

After holding SC leading scorer Keene scoreless through most of the third quarter, he began to take advantage of the defensive change and forced Boeheim’s Army’s elimination from the tournament.

Before BA’s second game, Nichols had mentioned how important defense was to the end result. Without good defense, offensive opportunities are difficult to find. After the loss to Sideline Cancer, seeded 19 spots below BA, his message resonated.

“It doesn’t matter what your name is, what level of basketball you played at, it all depends on how you play in Columbus,” Nichols said. “Those underdog teams, they know they have nothing to lose.”