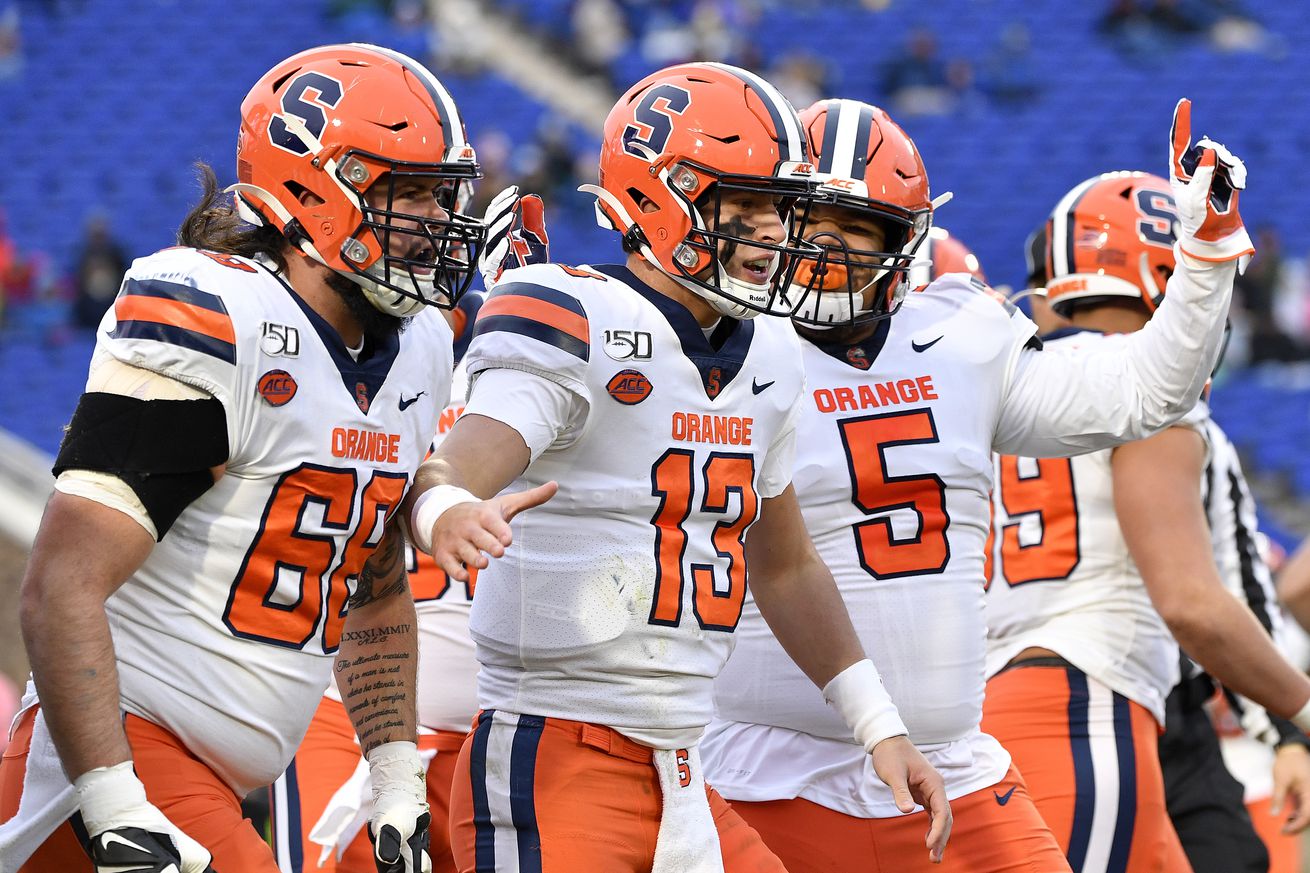 As is typically the case the week before games start, TNIAAM is busy tormenting you with various hypotheticals around the Syracuse Orange’s football record this season. Several of those pieces provide reasons for less-than-positive outlooks. But as you’ll see in Thursday (6-5), Friday (7-4) and Monday’s (my dog weighs in on 8-3) respective posts, there are reasons this upcoming campaign could go surprisingly well for the Orange.

Rather than throwing water on either notion, I’m providing specific reasons why both could be the correct take. Whichever possibility you opt to side with is up to you, of course. No refunds, per standing site policy.

Based on PFF grades, most of Syracuse’s best pass-blockers last year were not linemen, which makes sense when coupled with the Orange allowing 50 sacks on the year (fourth-most in the country). But as we’ve noted quite a few times before, play did improve over the final few weeks of the season, and that seemed to open up the run game considerably.

If we assume everyone is healthy right now — all we can do until the updated depth chart’s out — Syracuse brings back a group that started a combined 49 games if you factor in Florida transfer Chris Bleich. And still 41 if you don’t. Having four of five returning starters from the final few games of 2019 means there’s chemistry there too, which can be critical for any line, as we’ve noticed in previous years.

A sturdier line should mean this offense has a much better chance of looking like the dynamic groups we saw in Dino Babers’s first three seasons. Tommy DeVito will be healthy and have more time to throw. Plus the run game should actually be able to move the chains a bit. That’ll open up downfield throws and throws toward the sidelines. That all potentially spells “better” offense to me.

D-line in a better spot than you think

Replacing Alton Robinson, Kendall Coleman and Brandon Berry is no simple feat, but Syracuse’s returning talent and 3-3-5 scheme change may be exactly what the doctor ordered to power through. Josh Black, Kingsley Jonathan and McKinley Williams are all experienced and talented players, with Black showing the versatility to inside or out. The three-man front winds up leaning more heavily on the tackle position too, which should benefit the Orange given how good Williams is — and how much they missed him being at full health for much of last season.

Bringing in defensive end Cody Roscoe from McNeese State should also help, and allow for fresher legs from this line. I’m not going to pretend they’ll be able to equal the sort of pressure numbers that Robinson added, or the attention he commanded from opposing teams. However, this group still has the experience to fare well in an altered role that possibly does more to stop the run more (a weakness of most recent SU teams).

‘Cuse earned the flexibility to go with a 3-man front in part due to how good the playmakers in the secondary are. You’re well familiar with the big names there. Andre Cisco is an All-American, and the country’s top takeaway specialist. Ifeatu Melifonwu is an underrated cover man, and the sort of lockdown corner that allows Cisco and jack-of-all-trades Trill Williams take more risks. Team those three up with Eric Coley and an interesting group of freshmen, and you should have something pretty dynamic on your hands.

Like everything else, we’ll see in week one how well all of this looks on the field. But Tuesday’s conversation revolving around versatility for guys like Cisco and Coley (and Trill, too) could mean a lot of different looks that put some of the Orange’s top athletes in the best spots to flip the field — something that’s become a hallmark of this group in recent years.

Did players get enough time to implement coaching, scheme changes?

If this winds up being a concern, you can potentially toss out the advantages above. While Dino Babers made the bold moves to change both his offensive and defensive coordinators in the offseason, players didn’t get a ton of time with Sterlin Gilbert (OC) or Tony White (DC) before coronavirus sent everyone home. On offense, that potentially prevents some new wrinkles from being added to what’s largely the same scheme. Defensively, it makes a rebuild with a new scheme all that much tougher.

With various practices getting pushed and time pretty limited this summer, we’ll have to hope that players were able to pick up enough virtually to bring these changes to the field successfully. I’m not doubting SU’s roster as much as just the time constraints they’re under. And with tougher opponents like UNC and Pitt to start the year, Syracuse doesn’t really get time to wade in and work out the issues.

Related to the scheme change, the Orange have to rely on a new group of linebackers — its third in three years — picking things up rather quickly. Tyrell Richards and Mikel Jones are the only players with significant time in this defense, and they’re still rather green as potential starters. Linebacker struggles have been a source of frustration against the run in recent season, and has also been a development that’s put more on Syracuse’s line and DBs to be playmakers. In the 3-3-5, they’ll get some cover, especially from the extra man in the secondary. Still, if they need some time to warm up, it’s going to be a rough (at least) start to the year.

SU was already without Moe Neal at running back before questions arose around whether Abdul Adams and Jarveon Howard were playing this season. Now, if Syracuse also has to make a go of it without their top returning ball-carriers, things get dicey pretty quickly for a run game that needs to show improvement from last season.

No Adams or Howard likely means a combination of Jawhar Jordan, Sean Tucker and/or Markenzy Pierre. The former two are speedy backs, while the latter possesses similar size to Adams and Howard, but may not have the power needed in the red zone. We’ve floated the possibility of Marlowe Wax coming back over from linebacker, but that’s definitely a lot to ask, especially of a true freshman.

The receiver position should also provide at least a little pause. Yes, Dino’s teams have replaced top pass-catchers with some ease in the last four years, so losing Trishton Jackson isn’t the end of the world. Still, Taj Harris is your top wideout and if you don’t get a resurgent Nykeim Johnson back, there isn’t much else known about SU’s receivers. It’s possible that the Orange lean on tight ends like Aaron Hackett and Luke Benson, who both proved themselves valuable last year. That’s probably not the big-play offense you’re looking for, however.

Admittedly, the truth about what happens this season could be somewhere in the middle of these two explorations into extreme optimism and pessimism. Though injuries and/or opt-outs could also completely derail things even beyond what’s covered above. Which side of the fence do you see yourself on right now? Share your own thoughts below.