Quincy Guerrier collected a pass from wing Alan Griffin and dribbled into the lane. As he laid the ball off the backboard and into the basket for the Orange’s first score, the whistle blew for a foul.

Playing against one of the smallest teams in the nation, it took Guerrier less than 30 seconds to impose his physicality and size in the paint. Within three minutes of the second half, he had posted his fifth career double-double, and his second in two games.

Guerrier has emerged as the Orange’s most dominant player in the opening two games of the season. He’s now posted back-to-back double-doubles against both Bryant and Niagara while the Orange’s top rebounder and center Bourama Sidibe has been absent with a torn meniscus. On Thursday night against Niagara (0-2) in the Carrier Dome, Guerrier’s 23 points and 13 rebounds led the Orange in both categories as Syracuse (2-0) cruised to a 75-45 win. With Buddy Boeheim set to miss the next two games due to COVID-19 contract tracing and — Sidibe likely out a month — Guerrier’s developmental leap from his freshman year to a potential sophomore year breakout could define the Orange’s upcoming stretch of games.

Boeheim said Syracuse hasn’t practiced in 17 of the last 20 days. First, they had a 14-day quarantine following multiple positive tests. Then, the Orange did not practice on Sunday, Monday or Tuesday ahead of Thursday night’s game due to COVID-19 related issues. The result, Boeheim said, is that the Orange are out of rhythm and the play has been much worse than he anticipated in the first two games of the season.

Joe Girard III has only made four shots in two games so far this year, while Griffin hasn’t been able to consistently shoot it from the perimeter or off the dribble. But for Guerrier, he’s played two of the best games of his career in the opening two games of 2020.

“He’s so physical and strong and Marek is taking the bigger guy away so there’s more space for him to rebound,” Boeheim said.

When Guerrier entered as a freshman, some experts saw him as a potential NBA draft pick and a one-and-done at Syracuse. He spent his entire freshman year in a bench role, often as the Orange’s sixth man. The freshman forward proved he could rebound, but he made three 3s on 24 attempts throughout the entire season and wasn’t much of a scoring threat. Guerrier battled a groin injury in his freshman year, and said that he was currently at about 90% on Monday. As a freshman, Guerrier averaged 6.9 points per game. He’s scored more than double that in each of his first two games this season.

He said he’s been working on trying to improve his jump shot, an area where he struggled last season. And on Thursday night, Guerrier made his lone 3 point attempt and smiled as he trotted back on defense. A few plays later, he used the shot fake to get his defender off the ground. With one explosive first step, he had an easy lay-up.

“It’s just about playing with energy. I think there was some stuff I was not doing well, but like I said, I’m just trying to help my team run the floor, get rebounds and take my open shots,” Guerrier said. 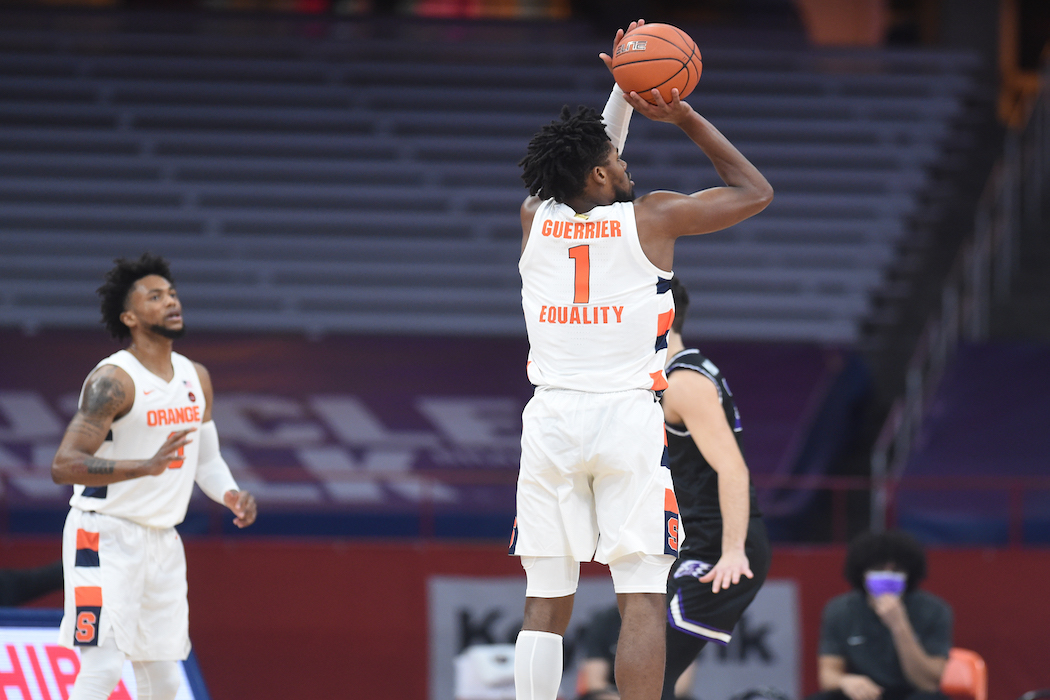 Quincy Guerrier averaged 6.9 points per game as a freshman. With Buddy Boeheim and Bourama Sidibe unavailable, Guerrier has an opportunity for growth. Courtesy of Dennis Nett, Syracuse.com

While Syracuse was in the midst of a 24-2 run to open up a lead in the later stages of the first half, Guerrier’s ability to control the glass and produce easy put back lay-ups helped the Orange’s offense when they struggled to make shots from the perimeter. Syracuse shot 5-of-23 from beyond the arc, but the Orange won by out rebounding Niagara 51-32.

Sidibe’s injury has forced Guerrier into a more natural role as a power forward with Marek Dolezaj shifting down to the center. Boeheim said that Dolezaj often floats out from underneath the basket. When Dolezaj gets on the ball and uses his passing range, Guerrier is able to tuck in further down low underneath the hoop, or step out for a three. When Girard missed a 3-point attempt, it was Guerrier on the weak side for the easy put back lay-in.

And when the Orange were out on the fastbreak in transition, Dolezaj found Guerrier for a pullup jumper and then for his lone three pointer. The Orange are playing at a faster tempo without Sidibe, and the pair have benefitted offensively from the increased pace.

“He’s really strong around the basket and finishing well,” Boeheim said. “You couldn’t ask him to do anything more.”

Guerrier has dominated the interior against two much smaller teams than the Orange. But more physical and taller teams are ahead on the horizon for Syracuse, starting with Rutgers on Tuesday night. Syracuse will be without Buddy for that game too, and Guerrier will need to continue to post double-double type performances going forward if SU wants to compete in Atlantic Coast Conference play without Sidibe.