bout every other day for two straight summers, a preschool-aged Alan Griffin attempted to ride a bicycle with his dad. Day after day ended with Alan frustrated at his inability to balance, though.

It wasn’t that Alan’s a slow learner — Adrian Griffin, his dad, had already taught him how to shoot a basketball. Alan just couldn’t figure it out. Maybe the 6-year-old needed a little kick, Adrian thought.

“One day, we were out riding a bike, and I was trying to teach him, and I said ‘This is the last time I’m taking you to try to ride a bike. If you don’t get it now, I’m taking your bike and I’m throwing it in the trash,’” Adrian recalled.

Sure enough, Alan steadily pedaled away.

“It kind of let me know that Alan just needs to be challenged,” Adrian said. ”Any time you challenge him, he always steps up to the plate. He’s one of those players that if you tell him he can’t do something, he’ll prove to you that he can.”

His two seasons at Illinois were a different challenge. He came off the bench and served primarily as a floor spacer, taking nearly two-thirds of his shots from behind the arc. Alan fulfilled the limited role brilliantly as a sophomore, averaging 19.9 points, 10 rebounds and a steal on 41.6% 3-point shooting per 40 minutes. But after transferring to Syracuse, Alan’s now facing a new obstacle: adding enough playmaking ability to his game to replace 2019 Atlantic Coast Conference first-team performer Elijah Hughes.

With Alan’s window to become a legitimate NBA prospect narrowing, this season is critical. For both Alan and Syracuse, there’s no time for training wheels.

“I know a lot of people think I just shoot the ball,” Alan said. “But I came here to prove otherwise.”

Alan transferred to Syracuse — choosing the Orange over Dayton, Miami, Arizona, Iowa State and Texas — because it offered him the biggest on-ball role. Pigeonholed as a sharpshooter on a team flushed with talent, Alan averaged just 18 minutes per game in 2019. The Ossining, New York native flourished in that role. Among all Division I players who used at least 20% of his team’s possessions, Alan finished first in offensive rating, a statistic that measures efficiency.

But Alan’s Illini experience was far from perfect. He was suspended from two games for stepping on a Purdue player’s chest, an incident he apologized for and said was “out of character.” He’d never displayed that type of misjudgement in high school. His high school coach Patrick Massaroni doesn’t remember him ever picking up as much as a technical foul at Archbishop Stepinac (New York), whom Alan led to the 2018 New York State Federation title. 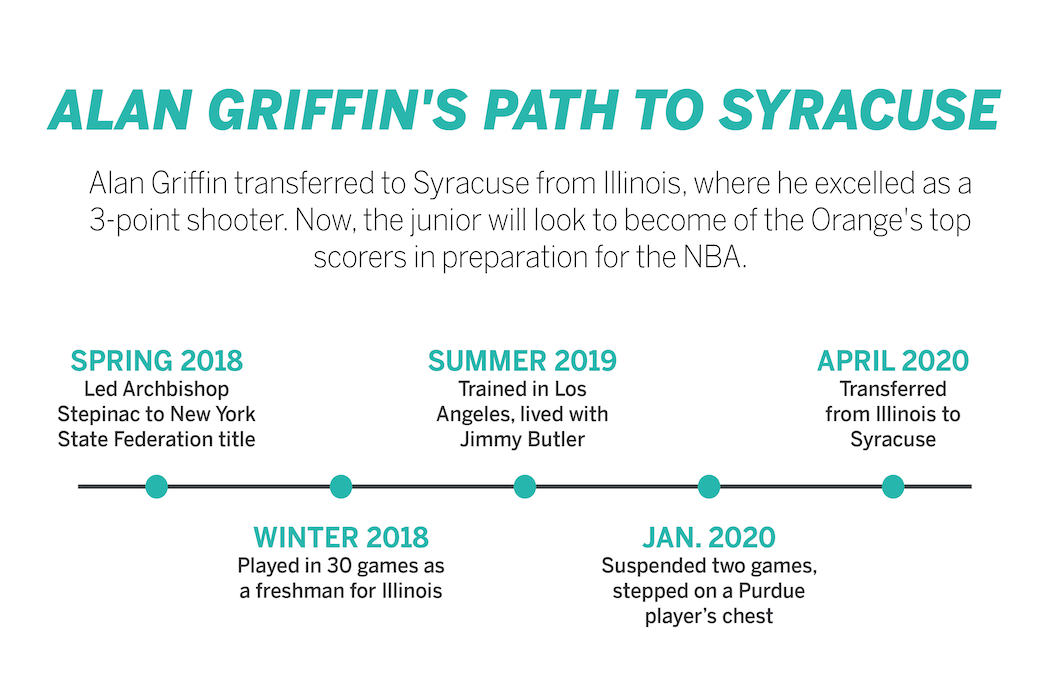 He grew frustrated with his playing time. Hiis dad reminded him that he can impact the game in other ways besides scoring, such as helping on the glass, setting screens and running hard in transition. Alan said his limited role at Illinois taught him to never take a play off. He’s “always active” with loose balls and offensive rebounds, point guard Joseph Girard III said. Head coach Jim Boeheim compared Alan’s energy to that of Baye Moussa Keita, who played center at SU from 2010 to 2014.

“I think he’s a very, probably the most high-motor player that I’ve seen in a while,” Boeheim said during a press conference. “I haven’t seen that many perimeter players that have that kind of motor. On every play, he’ll go after a rebound from 20 feet away and go get it above the rim. Loose ball, he’ll go get it from 25 feet away.”

The combination of effort and skills gives Alan a “chance to be a star” at Syracuse, as Massaroni said in April. At 6-foot-5, with great length and a knack for high-pointing rebounds, Alan shouldn’t have a problem sliding into the bottom of Syracuse’s 2-3 zone. But his star potential can only be reached if Alan combines his natural talent and physical gifts with the work ethic he’s developed from a young age.

Alan’s been around the game since he was born. Adrian, who’s now the lead assistant coach of the Toronto Raptors, retired from playing in the NBA when Alan was 8 years old. When his dad coached the Chicago Bulls, Alan would watch Derrick Rose and Jimmy Butler workout.

Two summers ago, leading up to Alan’s sophomore year at U of I, Butler invited Alan to stay at his house for about a week and work out with him in Los Angeles, where many NBA players spend their offseasons. Butler, a notoriously competitive player, led Alan through three workouts a day: one on the beach at sunrise, one in the afternoon and one at night.

“It was nice going out there, to be able to see what it’s like working out as a pro,” Alan said. “You know, what he does, everything’s done on point. From the start of the morning to the end of the night, everything’s on point.” 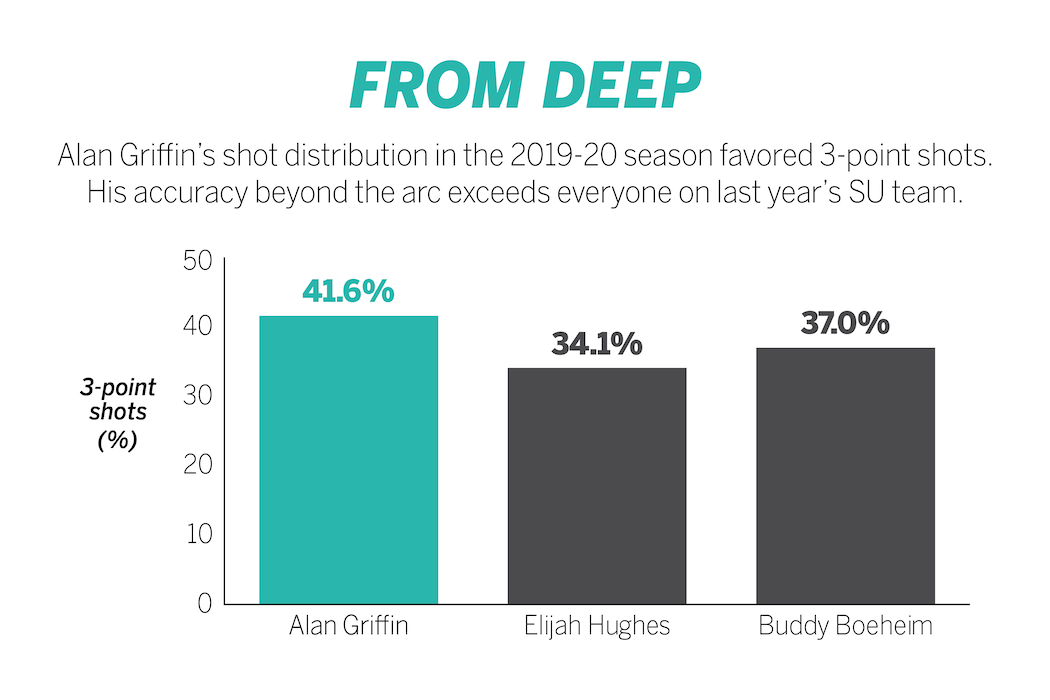 Alan’s work ethic also stems from his family. His younger brother AJ, who signed his letter of intent to play for Duke next season, has always pushed Alan in the gym. His younger sister, Aubrey, is a rising star for Connecticut’s women’s basketball team. Their intra-family games, with the sons playing against Aubrey and Adrian, often ended with AJ in tears. The Griffins’ mom, Audrey, was also an All-American track runner at Seton Hall.

When Alan knew this summer that he had to expand his playmaking ability in preparation for a bigger role at SU, the foundation was already set. Alan recorded more than two assists just twice in his 58-game Illinois career, and Syracuse will be in need of more off-the-dribble playmaking without Hughes.

He arrived at SU for offseason workouts and began training with assistant coach Gerry McNamara, who helped him see what angles to attack and when to use dribble moves. His shot distribution last year skewed extremely toward 3-point shots, with 63.4% of his attempts coming from behind the arc — 3.1% more than Buddy Boeheim in 2019-20.

He’ll have more freedom to attack the basket in Syracuse’s perimeter-oriented offense — which Adrian called “right up his alley.” How much Alan’s up to his latest challenge of transforming his game may set the ceiling on the Orange’s season.

“The way he can shoot the ball is unparalleled. Mix that with all the other things he’s been adding to his game, and then his mental preparation, I think lastly, his desire to get better and to prove to people that he can be an elite player at any level,” Adrian said, “I think that’s what’s going to shock a lot of people.”

The post PROVING IT: Alan Griffin was the most efficient scorer in the nation. At SU, his role will grow. appeared first on The Daily Orange.