The Black Oranges collective hosted a “4 Challenges 4 The Vote” webinar Monday, the night before National Voter Registration Day, to help spread voting awareness ahead of the November elections.

“We really wanted to create a space where student-athletes could feel like they could be engaged in the determination of our future,” said Lila Nazarian, a senior women’s lacrosse player at SU.

Nazarian and Kayli Jones, a fellow Project 444 spokesperson and a senior track and field member, discussed the voter registration process and why it matters, urging younger individuals to take action toward voting. Both Jones and Nazarian came from very politically engaged families, something that motivated them to get Project 444 up and running, they said.

Brian Tarrant, Black Oranges co-founder, views the relationship between the collective and Project 444 as a mutual one. He believes that the two groups are “useful resources to have” for all Syracuse students.

By involving Project 444 in Monday’s webinar, Brian’s main goal was to appeal to the younger generation.

“You’re never too young to have a voice and want to make a change in your community,” Jones said, citing 17-year-old Swedish activist Greta Thunberg as an example of younger people taking initiative. 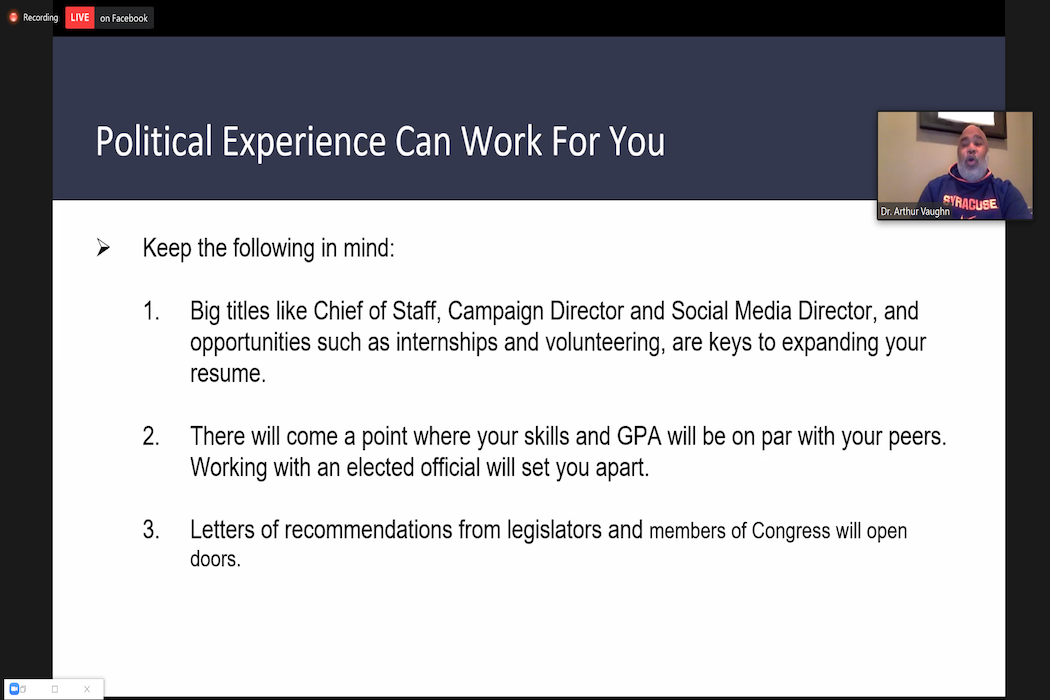 Arthur Vaughn graduated from Syracuse in 1992 and, in Black Oranges’ webinar, highlighted how political experience can benefit individuals. Screenshot

Among the other presenters were Syracuse alumni Arthur Vaughn (‘92) and Adolphus Belk Jr. (‘97), along with former Del. Shawn Tarrant, who was a member of the Maryland House of Delegates for eight years. Each offered insight into how people can effectively use their voice through voting.

Presenters emphasized why negative attitudes toward voting exist and how being an active voting advocate in one’s community can generate a positive spike in voter turnout.

“The things that you care about don’t come and go as elections come in and come out,” Adolphus said. The other presenters echoed similar messages, each stressing that voters must remain involved with voter awareness in their community.

Although Black Oranges and Project 444 are organizations that spread awareness within the current and former Syracuse network, Brian said he hopes to take a “Syracuse and out approach,” where Black Oranges’ message can spread beyond the Orange family.

“We want to create programs and tools in our own communities,” Brian said.

Monica Belk, another co-founder of Black Oranges, stressed that the organization “want(s) to grow,” and current and former students should feel free to reach out.

“I want to see where this goes. It’s going to give us a voice within the community and the university,” Monica said.

The webinar’s moderator, Dwayne Murray, hinted that a town hall event in the near future might be Black Oranges’ next major event. With the collective’s popularity steadily growing, they hope to become a resource that appeals to students across the country.

“This is for them,” Brian said.