ino Babers is known for his passionate speeches. His countless movie references, his lightning fast offense and his devout belief in his faith. When he was hired to coach Syracuse in 2015, his track record of success generated enthusiasm for a flailing program.

Regardless of what happens in the 2020 season, Babers has already made his imprint at Syracuse. He provided the best Orange season in more than 15 years in 2018, reenergizing the SU community about a football team that’s often seen as an afterthought to the basketball program.

Babers is the first coach to last five years at SU since Paul Pasqualoni in 2004. But through four years, 2018’s 10-win season has emerged as the exception, not the norm. To use one of Babers’ favorite measuring sticks, he’s been occasionally great but not consistently good. He needs to prove 2019’s failure wasn’t a sign that the Orange have peaked under him.

Last year, for the first time in his head coaching career, Babers’ program didn’t at least match the win total from the previous season. Replacing quarterback Eric Dungey and most of the offensive line could explain a step back. But 2019 wasn’t a step back. It was a never-ending backpedal consisting of stuffed runs, sacks and long touchdowns allowed.

The underlying numbers suggest that Babers wasn’t wrong. Syracuse wasn’t as bad as 4-8 indicated his first two seasons, as injuries to Dungey led to consecutive winless Novembers. With an opportunistic defense and an efficient offense, SU won 10 games, despite a second-order wins metric of 8.5 that suggests they overperformed. Second order wins combines a myriad of statistics and suggests how many games a team should’ve won given those numbers. 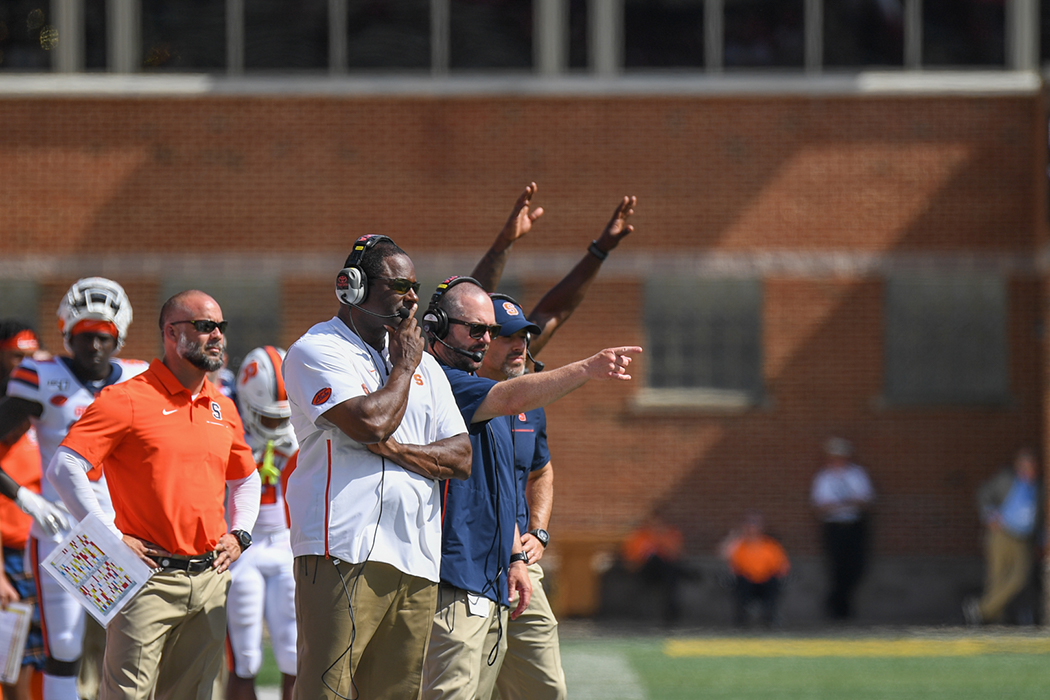 Syracuse is the third Division-I team that Dino Babers has coached, with his previous stops coming at Eastern Illinois and Bowling Green. Max Freund | Staff Photographer

Replacing both his offensive and defensive coordinators in a truncated offseason, in which players are opting-out and practices have been dramatically restructured, makes it difficult to fairly assess the Orange when they take the field at No. 18 North Carolina on Sept. 12. Babers deserves patience from the fanbase. Maybe even a few games of patience.

“Last year, we let that 10-3 season get to our head,” senior Chris Elmore said. “Obviously we didn’t have a good season like we wanted to last year. So I feel like a lot more guys are humble this year.” 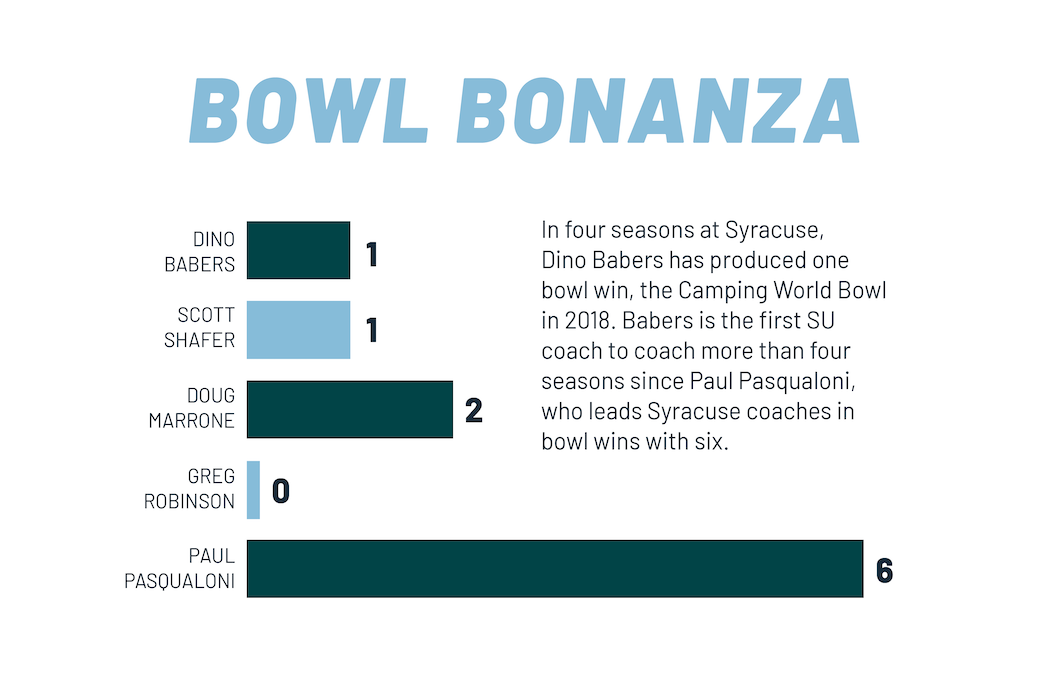 Babers has admitted that the SU team in the season-opener may be vastly different from the team later in the season. Positions haven’t been solidified yet, schemes are still being implemented and Babers hinted at multiple injuries impacting the team’s starting lineup.

Syracuse is the third Division I team Babers has coached. There was clear progress at the first two. He took over at Eastern Illinois in 2012 after the Panthers finished 2-9 in 2011. Babers improved them by five wins each season, finishing 7-5 in 2012 and 12-2 in 2013.

He then took a step forward, joining Bowling Green in the Mid-American Conference, his first head gig at an FBS school. In two years at Bowling Green, he had two winning seasons — culminating in a 10-4 season and a MAC Championship.

The Orange made positive strides in Babers’ first two seasons, even if they weren’t reflected in the win column. Wins against Virginia Tech in 2016 and a historic upset of defending national champions Clemson in 2017 laid down a marker. Babers no longer needed to ask for “belief without evidence.” He’d proven that he could bring Syracuse into the national landscape again, even if only for one night. 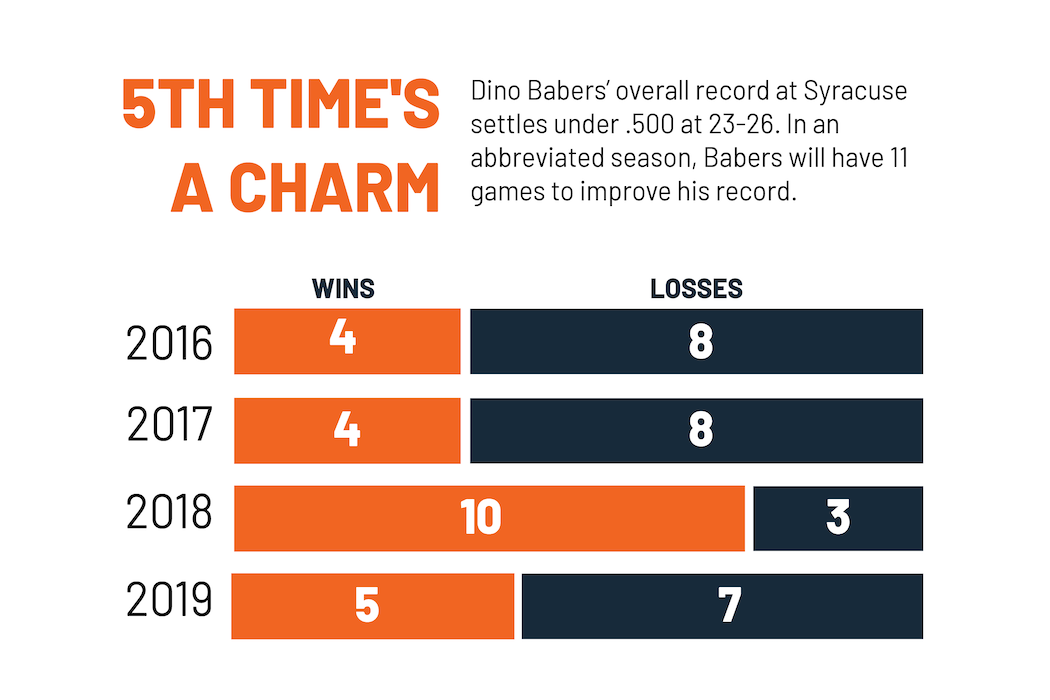 It wasn’t only one night, though. Syracuse was a penalty away from beating Clemson again in 2018, who eventually won the National Championship. SU rolled to a 6-2 Atlantic Coast Conference record, 10 wins, a bowl victory and a preseason national ranking in 2019, the first in more than 20 years.

Babers’ success gained him attention on the national stage, where some of the nations’ largest programs, including Florida State and USC, were rumored to be interested in the Orange’s head coach. He’s since signed an extension with SU and has received consistent praise from Syracuse Athletics.

“I’m proud to work with Dino,” Director of Athletics John Wildhack said. “I’m thankful he’s the leader of our football program. I love having him as our coach, I love him more as a person and a friend.”

The unbridled optimism entering 2019 led to plenty of excessive hype among the players, the city and the local media. Syracuse Mayor Ben Walsh hosted a preseason celebration for the Orange at City Hall. Many believed the Orange Bowl was a realistic goal. But by the second week, that was out of reach.

The Daily Orange’s beat writers picked the Orange to go 9-3, 9-3 and 10-2. College GameDay was poised to come to Syracuse when defending national champions Clemson returned to the Carrier Dome to face ranked SU. But the week prior, the Orange lost to Maryland by 43, woefully underprepared for a Terrapins team that also failed to qualify for a bowl game.

Instead of College GameDay and the most highly anticipated Syracuse home football game of the decade, SU fans were treated to a 41-6 drubbing on national television by the Tigers.

“A lot of guys didn’t like how last season went, we expected to do much better,” linebacker Mikel Jones said. “I don’t think we overlooked anybody, I feel like we didn’t prepare a lot. Some games we just weren’t fully prepared.”

The Orange replaced the boring, slow offense under Scott Shafer and had a faster pace than ever. Babers landed four-star quarterback Tommy DeVito to be Dungey’s successor. In a way, Babers’ success is tied to DeVito’s development. Multiple ACC coaches believe they’ve started to catch up to the pace of the SU offense after initially struggling to keep up.

Babers proved in 2018 that he can take Syracuse to levels it probably shouldn’t be at. He needs to restore belief in a fanbase that’s still wondering what went wrong in the 2019 season that had so much promise.

Until that happens, Syracuse’s progress has stalled.