On Friday, Syracuse finished out its regular season slate with a two-goal loss against then-No. 3 Boston College. The Orange trailed by just one goal at halftime, but the Eagles opened the second half on a 4-1 run that Syracuse could not recover from.

Syracuse brought the score to 13-12 after Meaghan Tyrrell and Emily Hawryschuk scored back-to-back unassisted goals, but Boston College countered with two goals of its own to secure the win in a rematch of last year’s National Championship game.

Still, Syracuse (13-4, 6-2 Atlantic Coast) jumped to No. 3 in the Inside Lacrosse rankings after Northwestern, whom Syracuse lost to earlier this season, lost to Maryland. The Orange also earned the No. 3 seed for the ACC Tournament and will look to overcome losses against No. 1 North Carolina and No. 2 Boston College en route to a conference tournament championship.

Here’s what you need to know about Syracuse’s chances to win the ACC Tournament:

Syracuse prevailed 17-11 when the two teams met earlier in the season in Charlottesville on March 12. The Cavaliers were ranked No. 14 at the time and have consistently remained within the top 20, currently sitting at No. 16.

In March, Virginia scored the opening goal, but Syracuse went up 5-2 at the end of the first quarter and maintained a substantial lead throughout the game. Meaghan led the Orange with five goals, and Megan Carney added three. The Orange also relied on midfielder Emma Tyrrell, who scored three goals and added two assists, in the win.

Virginia relied on both Ashlyn McGovern and Rachel Clark, who combined for seven goals. The key for Syracuse was its defensive discipline as it only allowed two free-position shots. Virginia couldn’t convert either.

Semifinals: Winner of No. 2 Boston College vs. No. 7 Virginia Tech

If Syracuse advances to the semifinals, it will most likely face Boston College. While it’s not unlikely that the Hokies can pull off an upset, the Orange handled them with ease in their first meeting, winning 17-5 to rebound after a loss to then-No. 13 Florida.

Syracuse went scoreless in the first five minutes of the game, allowing Virginia Tech to go up 2-0. But the Orange found their rhythm and finished the quarter on a 6-1 run. In the second quarter, the Orange put the game out of reach with six unanswered goals to go up 12-3 at half.

Assuming Syracuse plays Boston College, it will be a much tougher test for them to reach the championship game. As the regular season finale showed, SU is still lacking the consistency to play a complete game.

The two teams played a close first half, but Syracuse struggled to contain Boston College’s attack and had 29 fouls throughout the game.

While the Orange have lost their last two games against Boston College, last season they proved they could handle the Eagles, beating them in the ACC Tournament. Syracuse gave up 17 goals in last year’s ACC semifinal, but its attack scored 19. If the Orange can recreate that, expect to see them move on to the finals.

Championship: Winner of No. 1 North Carolina/No. 8 Louisville/No. 9 Pittsburgh vs. winner of No. 4 Duke/No. 5 Notre Dame

If Syracuse does advance to the championship game, its opponent will most likely be North Carolina, the best team in the country. The Tar Heels are a perfect 15-0 and have convincingly beat every team except Syracuse and Boston College, the only teams to get within two goals of the Tar Heels.

When Syracuse played North Carolina on April 9, it was its first game without the All-American Emma Tyrrell. Additionally, Carney left midway through the second quarter, making the Orange go even deeper into their rotation.

Since then, Natalie Smith has emerged as a prominent midfielder in Emma’s place, which head coach Kayla Treanor said proved she is one of the best in the country. The two teams went back and forth in the first half, but a 4-0 run by UNC in the third quarter left Syracuse behind. Similar to the Boston College game, the Orange stayed in the game but couldn’t take a late lead.

While UNC is the favorite, Duke is a major dark horse in the conference. The Blue Devils lost 18-4 to UNC last week, but they’ve been a threat with an upset, one-goal win over Boston College.

Duke also had a large lead against Syracuse, leading 9-2 after the first quarter. But Syracuse slowly made its way back into the game and pulled away to an 18-16 win. 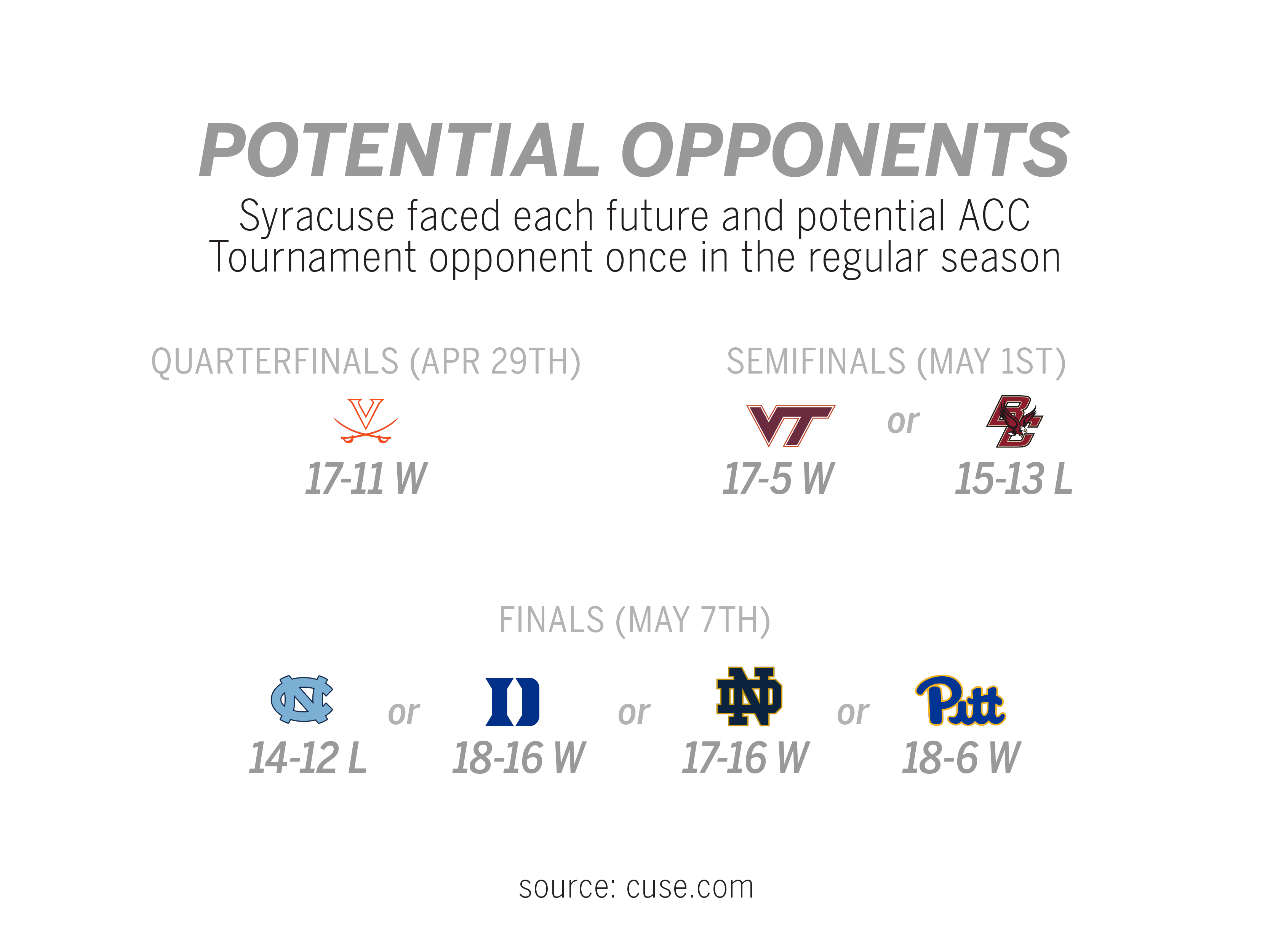 Even though Syracuse is the No. 3 seed in the ACC, it is also the third-best team in the Inside Lacrosse rankings, only behind Boston College and UNC. Syracuse lost to both teams, but as Treanor has stressed in her postgame remarks, the team didn’t play its best lacrosse in either of the two games.

Against UNC, the Orange were still changing their lineup due to injuries. Against Boston College, Syracuse played a poor third quarter and received some unfavorable calls that prevented it from gaining any late momentum.

The Orange have five experienced players in Sarah Cooper, Meaghan, Hawryschuk, Carney and Sam Swart who have led the team to many wins and postseason runs. If the team plays to its potential, an ACC championship is more than likely.

The post Previewing No. 3 Syracuse’s path through the ACC Tournament appeared first on The Daily Orange.