The space between two perpendicular trees created an ideal lacrosse goal in the Hiltzs’ side yard, with the trunks serving as the side pipes.

When Joe and Gerry Hiltz played junior lacrosse, almost 40 kids from opposing teams could be found at their house in Peterborough, Ontario, at once. Each player got to perfect their skills in the yard, taking turns as goalie in between the trees.

The trees remain in the Hiltzs’ yard almost 30 years later, and they have been joined by two actual nets. But the next generation of kids, including Joe and Gerry’s nephew, Owen Hiltz, carried on the tradition, taking turns shooting on the goal years later. The family would have dinner at their grandparents’ house before Hiltz and his cousins went outside and played “Horse,” “Pig” or “shootout,” developing their game in the same place their parents, uncles and aunts did.

“They always were just around the sport of lacrosse when I was born,” Hiltz said of his family.

Hiltz’s grandmother has been involved with the Peterborough Lakers, a Senior “A” box lacrosse team, for the last 49 years. All three of his uncles played, too, with two making it to the NLL and his mother, Jennifer, starring for Team Ontario. And Hiltz, who missed this season with an upper-body injury after scoring 29 goals as a freshman last year, has continued the family’s specialty 250 miles away from those perpendicular trees in Ontario.

“The family is pretty synonymous with the game of lacrosse in Peterborough,” said Tracey Kelusky, a Peterborough native and Hiltz’s former travel coach. 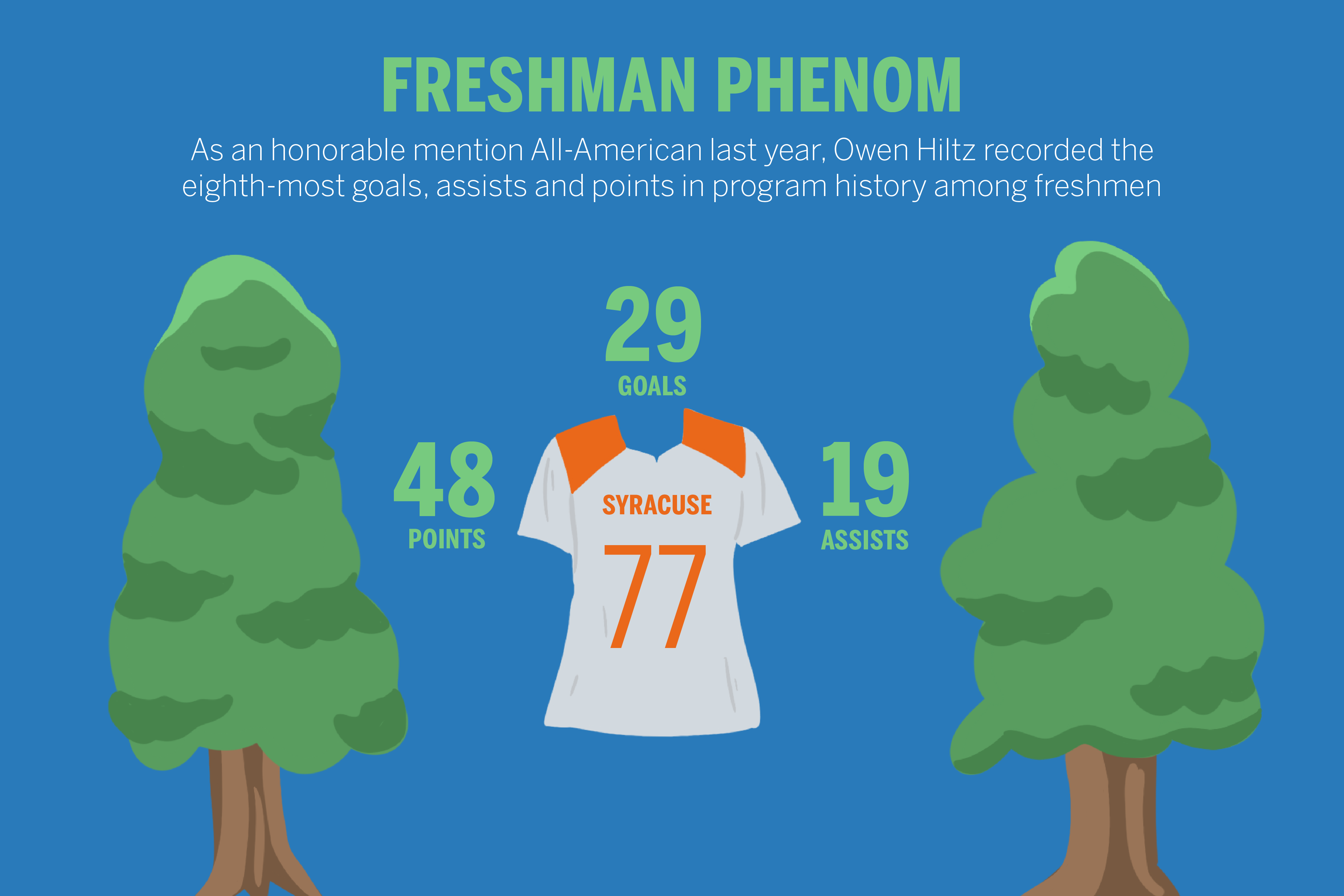 Jennifer said Hiltz started with the “family tradition” as soon as he could walk. When Hiltz was 3, Jennifer took him to the school down the road from their house. Hiltz would throw the ball off targets on a wall, most of the time unable to secure it back into his stick. Jennifer then ran down the hill and threw the ball back to Hiltz when he couldn’t haul it in, helping him with the foundation of his stick work, he said.

That stick work developed into one of Hiltz’s strengths, helping him make up for his smaller frame, Kelusky said. Hiltz said people have told him he’s a mixture of both his uncles, who went through the same maturation with their stick work. Jennifer said Hiltz has Joe’s vision and Gerry’s speed, too.

“It’s amazing when you’re related how you can be very similar to somebody. I see a lot of Joe in Owen and how he plays the game of lacrosse,” said head coach Gary Gait, who played alongside Joe with the Buffalo Bandits in the NLL. “It feels like I’m hanging out with his uncle again and playing lacrosse again.”

Kelusky said Hiltz’s uncles were “as deceptive as anybody” despite not being the biggest players, adding an extra level to the craftiness of their stick skills. But Joe said he only had that craftiness inside while Hiltz became “two-fold,” able to score from inside and outside.

The two Hiltz generations improved their scoring ability through box lacrosse with the Lakers, which has a variety of junior programs that Joe coached and Hiltz played in. Through an 11-week box lacrosse season, Joe said Hiltz was able to learn how to catch and shoot in tight spaces, unable to shoot from the side on the 4×4 footnet.

Hiltz’s success at the junior level attracted some high school coaches in the U.S., like Jon Posner, the then-head coach of Indiana’s Culver Military Academy. Posner came up to see Hiltz play when he was 15 at a juniors qualifiers tournament in Chicopee, Ontario.

Posner kept a notepad with him on all his trips to scout potential players for his high school programs, jotting down the number of any player that stood out. At first, he wasn’t impressed by Hiltz’s relaxed warmup before the game. But Hiltz proceeded to score four first-period goals, surprising Posner.

“At the end of the game I think his number was (written) down 25 times,” Posner said. “I only had to see him for five minutes before knowing that he was the guy.”

After going to Culver Hiltz also started playing for Evolve, a travel program coached by Kelusky that gets the best players from collective communities in Ontario. 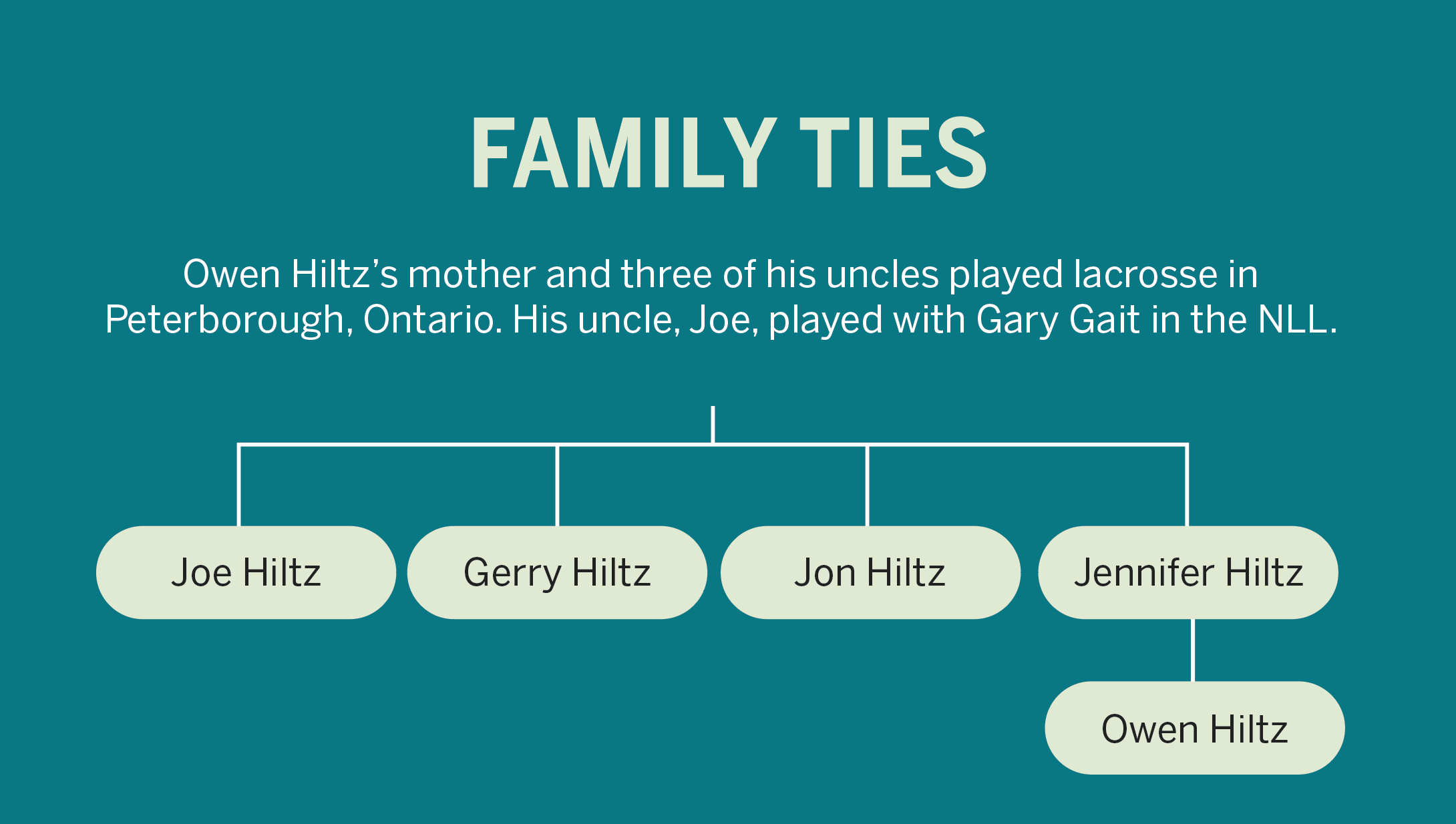 Hiltz separated himself from other Peterborough kids by wanting to play with more than just the teams closeby, Kelusky said. Joe didn’t have the opportunity to play for travel teams when he was at the junior level, something he said gave Hiltz the opportunity to “shine” against some of the best talent in the province.

Joe finally had the opportunity to coach Hiltz in Peterborough from ages 15 to 17 while he started playing for Evolve. Before playing for his uncle, Hiltz had spent time on the sidelines with Joe as he coached in the Lakers’ program. After Hiltz’s youth teams finished summer practices in the morning, Hiltz played catch with the older players, serving as the de facto ball boy, he said.

Hiltz took in as much as he could from some of the elite players in his “backyard,” Kelusky said. He got to see the development of players like Zach Currier and Ethan Walker firsthand, following their footsteps to Culver. And he learned from his peers as well, sitting on the sidelines between games instead of going back to the car, Kelusky said.

But Hiltz learned even more inside of Peterborough Memorial Centre, the Lakers stadium, Kelusky said. Hiltz said his family was either playing, coaching or watching games in Memorial Centre, including watching him win back-to-back Mann Cups in 2017 and 2018.

Hiltz brought his stick into the stadium, finding a spot in the stands with his grandfather or mother at “as many games as possible.” Sometimes he sat alone, taking in what he could from Peterborough’s best while his own ascent was on its incline.

The post Owen Hiltz is next up for a family ‘synonymous’ with lacrosse in Peterborough appeared first on The Daily Orange.