Syracuse (1-7, 1-6 Atlantic Coast) is tumbling toward one of its worst seasons in program history as the Orange hit the road to take on Louisville (2-6, 1-6) on Friday night at 7 p.m. at Cardinal Stadium in Louisville, Kentucky.

Before last week’s bye, the Orange lost five consecutive games — four of which in the Atlantic Coast Conference — but the team scored a late touchdown against Boston College to end the streak of losses by double digits. While Louisville’s offense overpowered the Orange in 2019 and ended their hopes of a bowl run, the Cardinals attack hasn’t been nearly as effective this season.

Here’s everything you need to know about the Cardinals prior to their matchup with the Orange on Friday night.

The Orange came out of the bye last season with a blowout win against Duke, and the offense showed legitimate improvement in the final few weeks of the season after Matthew Bergeron replaced Ryan Alexander at right tackle.

Syracuse’s offense found plenty of success at Louisville, but its defense was unable to stop Cardinals quarterback Malik Cunningham and their explosive offense. Cardinals running back Javian Hawkins ran for 233 yards and a touchdown, while Cunningham tossed five scores and ran in one more.

After Louisville jumped out to a 21-3 lead, Syracuse got within two scores late, but the Cardinals offense pulled away to secure the victory.

Louisville has underachieved in ACC play this season, with just a 1-6 conference record after an impressive first year under new head coach Scott Satterfield. The Cardinals finished 8-5 and won a bowl game and five conference games in their first season with Satterfield. But in year two, there’s been much less success.

The Cardinals rank eighth in the ACC in success rate on offense, but they’re first in explosiveness. No team is more reliant on the big play than the Cardinals, and this was equally true in 2019, when Louisville was first in explosiveness but fifth in success rate. The offense will be without Hawkins, their top running back, after he opted-out of the remainder of the season.

Louisville’s defense is also prone to giving up big plays, too. Only Virginia and Duke allow more than the Cardinals, though they’re fifth in defensive success rate. Friday night could be very hit or miss for the Orange’s offense, much like it’s been the entire season.

By defensive line yards, the Cardinals run defense is similar to Wake Forest, who was largely able to bottle up SU’s rush. 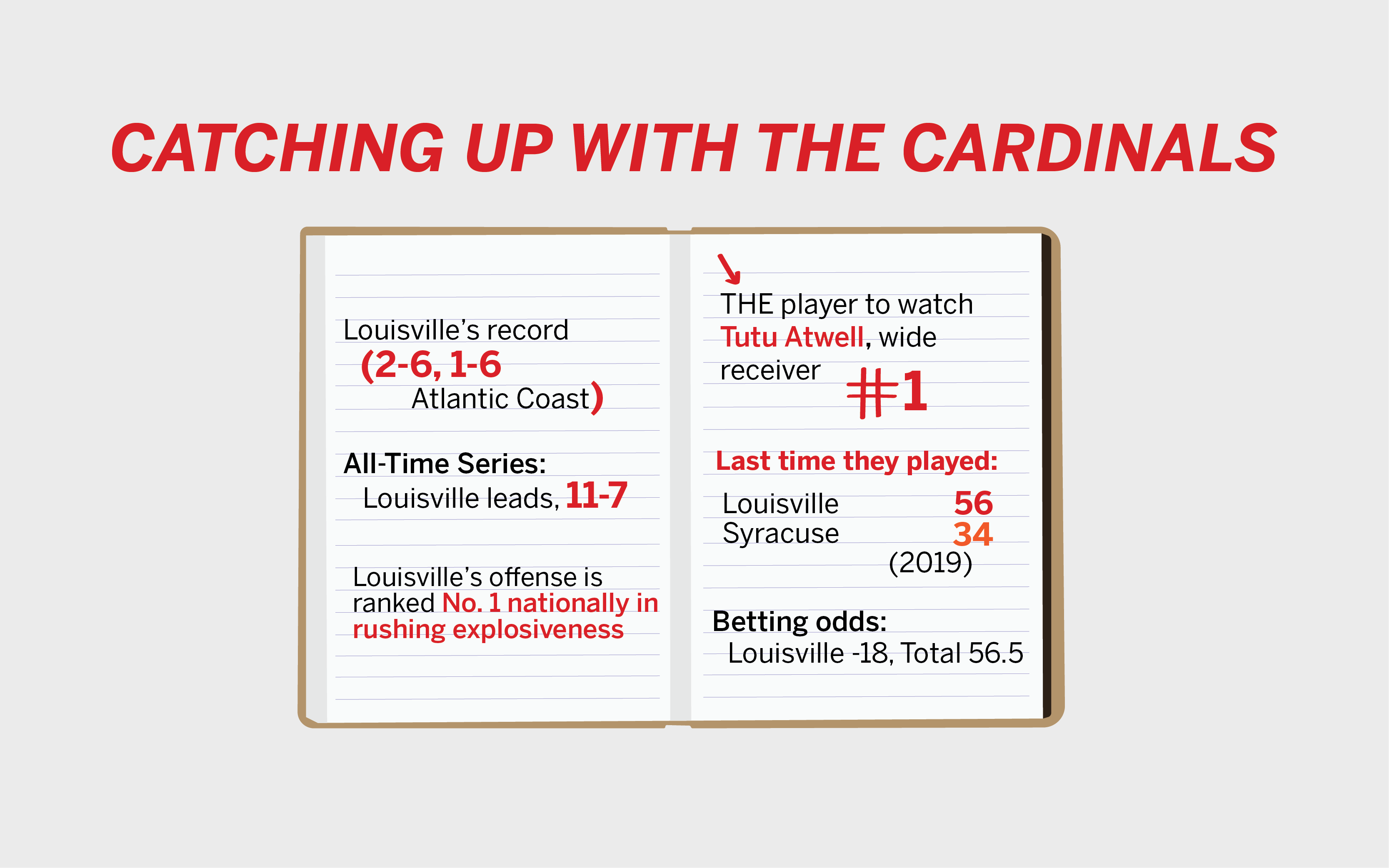 There’s only one way the Orange will be able to stay in this game, and it’s by limiting Cunningham’s and the Cardinals offense’s big plays. Because of SU’s turnover issues, it hasn’t been able to sustain long scoring drives as frequently as last season.

Louisville’s offense is ranked No. 1 nationally in rushing explosiveness. They have a high stuff rate and a low success rate, but when they do break a big play, it tends to be a really big play.

The Orange have been susceptible to big running plays on the ground. Safeties Ja’Had Carter and Rob Hanna will need to avoid missed tackles and bad angles to force longer drives to beat them.

Tutu Atwell did not play in the Cardinals’ loss to Virginia last weekend, but he was on the sideline. He’s questionable to play in Friday night’s encounter, but if he does, the Orange will need to track him all over the field.

The wide receiver had five receptions, 152 yards and two touchdowns in the win last season. Syracuse head coach Dino Babers highlighted him during this week’s Zoom press conference as a difficult matchup in this Louisville offense. The Orange will have to keep him from beating them over the top if they want to limit the Cardinals offense.

The post Opponent preview: What you need to know about Louisville appeared first on The Daily Orange.