For many of SU’s seniors, this could be the last time they suit up for the Orange unless they decide to utilize their extra year of eligibility that the NCAA gave due to the pandemic. No senior has committed to leaving or staying at this point.

Here’s everything you need to know about Notre Dame, Syracuse’s final opponent of 2020:

The Orange faced the Fighting Irish at Yankee Field in 2018 as part of Syracuse’s 10-win season. No. 20 SU was clearly outmatched as its opponents scored on three of the first four drives and cruised to a 33-point victory.

Then-senior quarterback Eric Dungey left in the first quarter with an injury after only throwing four passes. Tommy DeVito, a redshirt freshman at the time, struggled against a stout Notre Dame defense, completing 14-of-31 for 105 yards and two interceptions. Syracuse failed to score a touchdown for the only time that season.

The Irish dominated SU on the ground, pummeling the front seven for 4.75 yards per carry and 175 total rushing yards. Now-senior quarterback Ian Book tossed for 292 yards and a score, including one to Chase Claypool, who is now a wide receiver for the Pittsburgh Steelers.

Betting odds: Notre Dame is favored by 33.5 points, per BetOnline.

The Fighting Irish, like most years, are led by a dominant offensive line. Pro Football Focus ranked them the best in the nation. The team’s run grade of 89.7 is the highest in the country and is why Notre Dame averages over five yards per carry. Left tackle Liam Eichenberg is the most touted, having not allowed a sack since 2018.

But perhaps more impressive is the front seven, as Notre Dame allows only 48 rushing yards per game and less than 2.9 yards per rush. Senior linebacker Jeremiah Owusu-Koramoah, a consensus first round pick according to most NFL mock drafts, has 8.5 tackles for a loss in just nine games this year.

In Notre Dame’s stunning 47-40 overtime win over Clemson in November, the Irish held Clemson’s offense to 34 rushing yards, just one yard per rush. Travis Etienne was held to his lowest mark (28 yards) of the season. 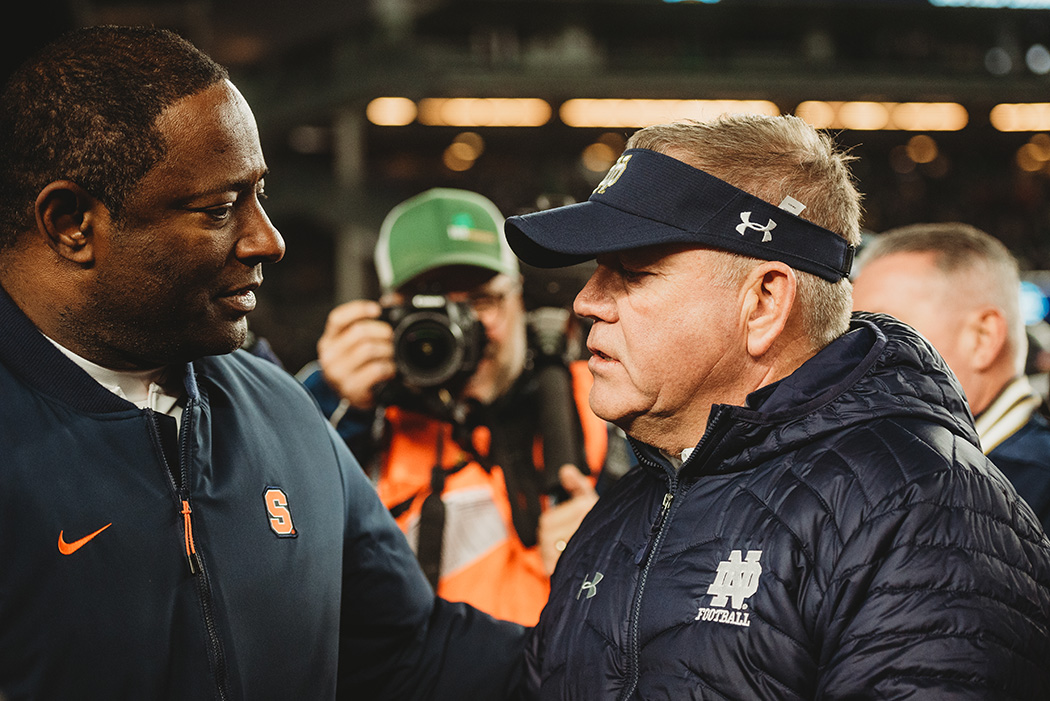 How does Syracuse beat Notre Dame?

This is a question no ACC team can answer yet, including No. 3 Clemson, Boston College or UNC. Notre Dame’s ability to block allows it to constantly move the chains, and its ability to rush the passer and stop the run frequently returns the ball to Book and the offense.

One-win Syracuse may need a stroke of luck on Saturday if they want to topple No. 2 Notre Dame. That means a special teams touchdown, the defense turning turnovers to points and perhaps another career game from Taj Harris.

Book has 18 total touchdowns, 12 passing and six rushing. The senior quarterback, who’s played in a college football playoff before, has the luxury of a dominant running game and a potential All-American tight end, but he’s done the job in the first nine games.

He’s showed up when necessary, including against Clemson or Boston College, and made few mistakes — he’s thrown only one interception. So far, the formula has worked.

Freshman Michael Mayer is Notre Dame’s second leading receiver in yards and touchdowns. He’s caught 25 balls in nine games despite starting only two. The No. 2 overall tight end in the 2020 class is perhaps Notre Dame’s most reliable pass catcher.

The post Opponent preview: What to know about undefeated Notre Dame to end season appeared first on The Daily Orange.