Syracuse sits in danger of missing the NCAA Tournament for the first time since the 2016-17 season unless it claims the Atlantic Coast Conference’s automatic bid, a quest the Orange begin on Wednesday as the No. 9 seed against No. 8-seeded Florida State. The winner advances to the quarterfinals against top-seeded Duke the next day.

During the regular season, the Orange and the Seminoles split their pair of matchups, but the two teams enter the postseason on different trajectories — with SU dropping its last four games, while Florida State won its last three. Syracuse blew an 18-point lead in the second half of its most recent game against Miami, surrendering a 10-0 run across the last 70 seconds to spoil Buddy Boeheim’s 30 points on Senior Day and clinching SU’s first regular season under .500 with Jim Boeheim as head coach.

Caleb Mills hit five 3-pointers, and Florida State connected on 12 as a team, as the Seminoles erased a double-digit deficit in the first half to eventually edge Syracuse, 76-71 in mid-January. They shot 55% from the field and 60% from 3, a stark contrast to the first meeting between the teams back in December when FSU only made 4-of-30 shots from beyond the arc. Buddy led Syrause with 18 points, and Cole Swider added 17 while making four 3s after he’d converted just two in SU’s previous two games combined.

But the Orange still had a chance to escape the Carrier Dome and prevent their fourth loss in their last five games. Trailing by one in the final seconds of the game, Syracuse had a chance to take the lead and drew up a final attempt for Jimmy Boeheim during its timeout. His hookshot — which Swider said “he makes 90% of the time” after the game — bounced off, though, and the Seminoles extended their lead to two possessions after free throws and a costly turnover by Joe Girard III on an inbounds pass.

“We just weren’t as effective defensively as we need to be,” Boeheim said postgame. “They shot it really well. They made some long 3s, some tough 3s. But we have to defend it better than we did.”

Injuries have plagued Florida State throughout the season, but the Seminoles recently returned Mills and Anthony Polite last week after absences of five and seven games, respectively. But forward Cam’Ron Fletcher, who’s scored three points and grabbed four rebounds in 15 minutes of playing time against SU this season, injured his thumb against Notre Dame on March 2 and will miss the remainder of the season, according to the Tallahassee Democrat, while Malik Osborne and 7-foot-4 center Naheem McLeod have been ruled out for the rest of the year, too.

Osborne missed Florida State’s second game against Syracuse this season, while McLeod was limited to four points and zero rebounds in 13 minutes. The Seminoles won three consecutive games afterward — giving them a season-best winning streak of six — but they lost eight of nine to follow that stretch, with injuries adding up and limiting the consistency and continuity within the rotation from game to game.

FSU still managed to win three straight games to close the regular season and is paced offensively by four players averaging double-digit points, with Mills as its leading scorer at 13 per game. But defensively, despite top 20 steal (17th) and block (11th) percentages on KenPom, the Seminoles have struggled to defend the 3 and allow a 42.5 3PA/FGA clip, which ranks 312th nationally.

Florida State has generated open looks, and plenty of them, in both games against Syracuse this season, but the Seminoles only converted those opportunities in their most recent meeting. SU can allow those 3s as long as it finds ways to generate its own shots beyond the arc for Buddy, Swider and Girard against an FSU 3-point defense that ranks near the bottom of the country. The Orange stayed out of foul trouble for the most part against the Seminoles with the exception of Jesse Edwards fouling out in the December game, and they’ll need that trend to continue with Edwards and Benny Williams out due to injury and the status of Symir Torrence in flux, too.

Minimizing FSU’s height advantage will also be key for the Orange, given the absence of Edwards and spotty play by Frank Anselem and Bourama Sidibe at the center position. Neither of the latter two options have consistently stayed out of foul trouble, and when Boeheim has turned to John Bol Ajak for sparse minutes, he’s also strung together foul and foul.

Edwards averaged 6.5 rebounds per game this year, but against the Seminoles, he surpassed that average both times — recording seven and a season-best 12. Anselem has flashed the impact he can make on the boards, and SU will need him to anchor the paint defensively while providing enough movement on offense for the Orange’s shooters to find a rhythm. 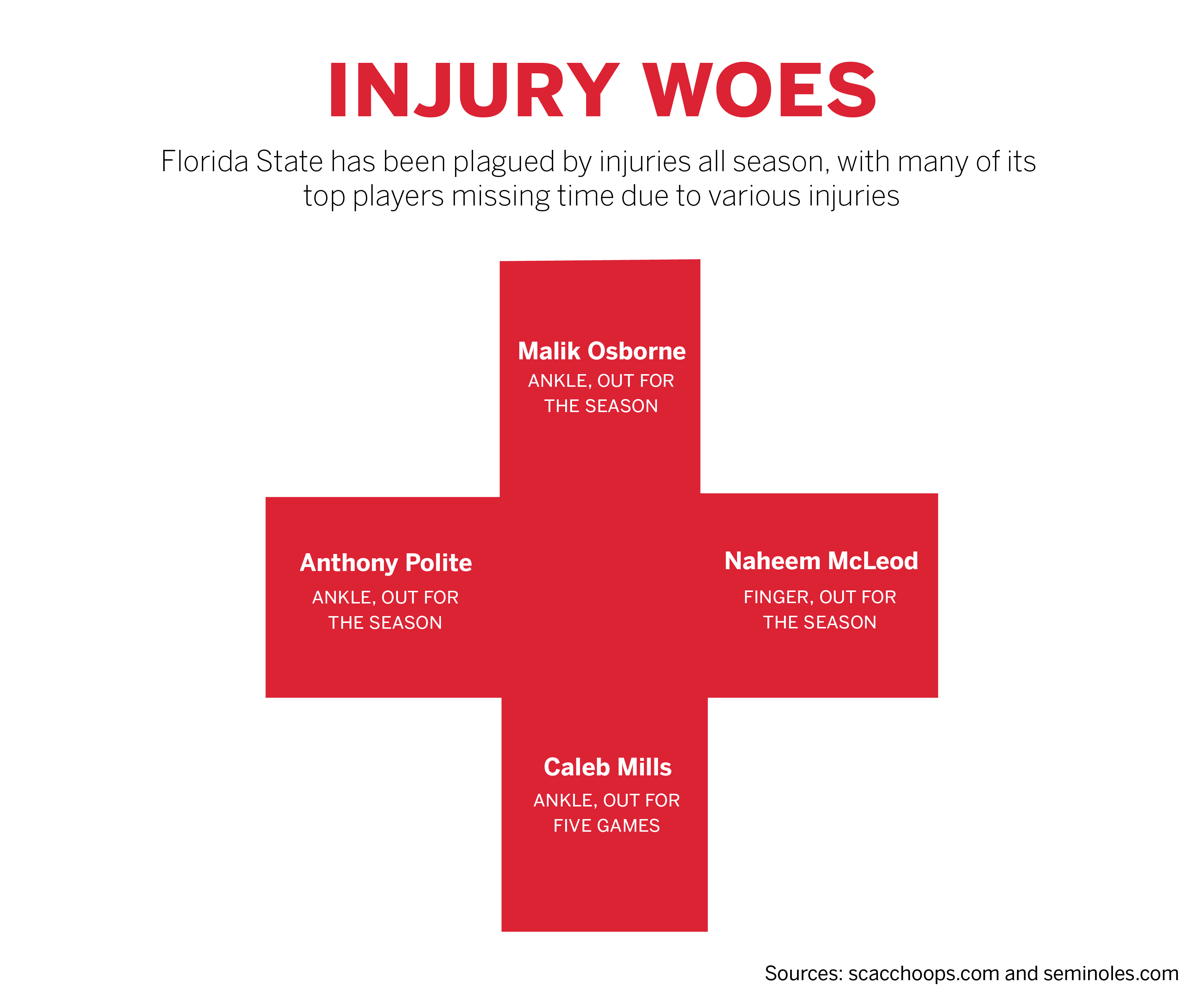 Florida State’s defensive 3-point percentage ranks 319th in the country, according to KenPom, and its defense against shots from beyond the arc ranked second-worst in the ACC during the regular season. SU allowed 57 more 3s than the Seminoles, but the 265 shots that FSU’s opponents made came on fewer attempts.

Polite has topped double-digit points in five of the last six games he’s appeared in, with a seven-game absence due to injury splitting and prolonging the duration of the streak, after logging just five games with more than 10 points in Florida State’s first 17 contests of the season. He’s a 6-foot-6 redshirt senior who recorded three consecutive games with at least 10 points in the Seminoles’ postseason last year — their final two games of the ACC Tournament and first round of the NCAA Tournament, including a season-high 22 points against Colorado — and has started to emerge as another option in the offense with Osborne out.

According to KenPom, Polite’s 7.2 offensive rebounding percentage ranks near the best among FSU’s active, and non-injured, players, and in two games against the Orange this season, he recorded 13 points on 4-for-15 shooting and 11 rebounds. If he converts at a better rate against SU this time, he could become an important factor for the Seminoles, especially if their 3s don’t fall at the same clip that they did on Jan. 15 against the 2-3 zone.

The post Opponent preview: What to know about FSU before SU’s ACC Tournament matchup appeared first on The Daily Orange.