Syracuse’s final nonconference matchup of the 2021-22 season, pending a rescheduled game against Lehigh, places Jimmy Boeheim and the Orange against Cornell — his former team — and a Big Red program that’s lost just two games this season.

The Orange enter off a 93-62 victory over Brown, while Cornell hasn’t played since losing to Virginia Tech by 33 on Dec. 8. The Big Red’s Dec. 19 game against Bryant was canceled after the university moved into Alert Level Red due to rising COVID-19 cases and potential presence of the omicron variant on campus. Then, a game against the Orange four days later was postponed after at least 14 of 20 members of the Syracuse program tested positive, too.

Here’s what you need to know about the Big Red (8-2) before their series with Syracuse (6-5, 1-0 Atlantic Coast) is renewed, as the two teams couldn’t meet last year following the Ivy League’s postponement of its season.

Behind 22 points from Elijah Hughes and 16 from Buddy Boeheim, Syracuse outscored the Big Red by 18 in the second after leading by just one at the break, and it pulled away for a 72-53 win on Nov. 20, 2019. It helped the Orange improve to 3-1 in their young season, though they’d lose four of their next six games to give them five losses before the calendar flipped to 2020.

Jimmy, then a starting forward with the Big Red, led all scorers with 25 points, hitting 7-of-16 shots and attempting 11 free throws. He scored 12 of Cornell’s 25 points in the first half to help the Big Red remain in striking distance. But after he hit a free throw that trimmed Cornell’s deficit to 44-41 with 9:56 remaining, Syracuse scored 28 of the final 37 points to break open what had been a tight game.

Before the game, Syracuse players wore #NotAgainSU t-shirts in support of students protesting hate crimes on campus and the university’s response — to both the recent incidents in the fall 2019 semester and those in previous years like the Theta Tau videos and Ackerman Avenue assault. The game unfolded as SU students and administrators met at Hendricks Chapel to discuss #NotAgainSU’s demands, which Chancellor Kent Syverud signed later that night after calls for his resignation. “When I brought it up everyone really bought in,” Elijah Hughes said postgame of wearing the shirts. “It was something we decided to do together.” 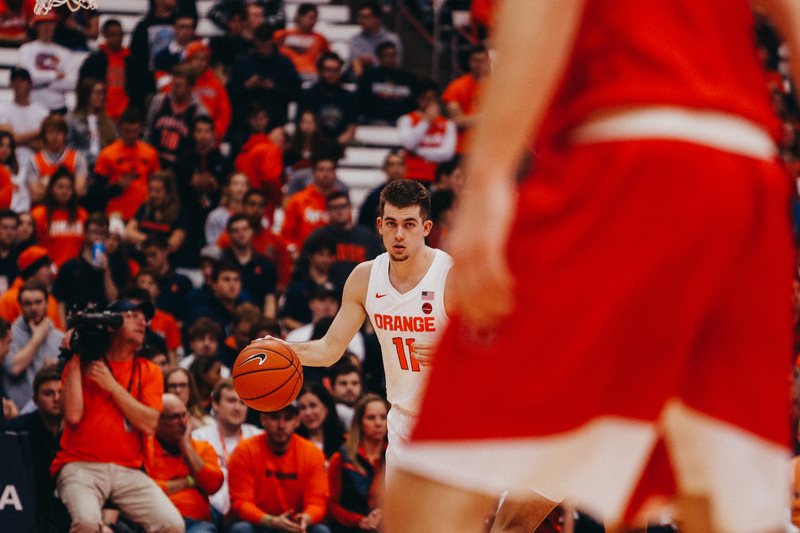 The Orange hadn’t played in 16 days before their game against Brown, but it’s been even longer for the Big Red. Cornell last played on Dec. 8, when they lost to Virginia Tech by 33. Before that break, though, Cornell won eight of 10 games to open the season, though none of their victories came against a team ranked higher than No. 150 in KenPom’s rankings. Their other loss, outside of the one against the Hokies, came against Penn State on Nov. 22, when they fell to the Nittany Lions by 11 after surrendering a 21-7 run to close the game.

After Jimmy transferred to Syracuse, Cornell’s leading returning scorer heading into the season became Jordan Jones, who averaged 7.3 points and 3.1 rebounds per game during the 2019-20 campaign. Through 10 games, he’s emerged as the Big Red’s leading scorer with an average of 12.7 points per game — though he only combined to score eight points in Cornell’s pair of losses. The Big Red have the 18th-best effective field goal percentage in the country, per KenPom, and also have the lowest offensive average possession length in the country at 14.2 seconds per game.

But that explosiveness on offense, largely occurring against teams outside Power Five conferences, hasn’t translated to the defensive end and to its rebounding, as Cornell ranks lower than No. 210 nationally in both offensive and defensive rebounding percentage. It also ranks 216th in defensive 2-point percentage, too, with perhaps a lack of height on its roster at the post positions — the tallest Big Red players are Kobe Dickson and Sean Hansen at 6-foot-9.

How Syracuse beats the Big Red

The Orange should be able to win this game comfortably even if they don’t connect on 57.4% of their shots like they did against Brown. The likelihood of replicating that level of production, given how the first 10 games of their season went, is slim. If Buddy and Cole Swider build on their individual performances from Wednesday and continue stringing shots together, that’ll be a bonus for SU and promising for future games when the Orange need that.

But Syracuse could also defeat the Big Red by relying on Jesse Edwards and Jimmy around the painted area, and that’ll likely be a more effective scenario given Cornell’s lack of interior size. The victory against Brown was the first time in seven games that Edwards didn’t score 10 or more points, yet he still ranks 19th in the country in 2-point percentage at 72.5%.

Cornell ranks 27th in the country in bench minutes percentage at 40.5%, per KenPom. By comparison, the Division I average is 31.4% and Syracuse’s sits at 17.9% — the latter of which is 354th in the country. Ten players have averaged at least 12 minutes per game this season on the Big Red, with no one topping a number higher than senior guard Sarju Patel’s 22.1, while the Orange only have five players who average that much court time per game.

No Cornell player has a percentage of minutes played that rises above 59.4%, a percentage held by Dickson. Buddy, on the other hand, leads Syracuse with 91.3% and ranks No. 20 in the country.

When Penn State and Virginia Tech’s defense limited Jones, Dickson produced two of his best games this season by scoring eight and 11 points, respectively. The senior forward only averages 7.2 points per game, but he’s connected on 50% of his shots from the field this season — his first as a full-time starter. At 6-foot-9, and the tallest player in Cornell’s starting lineup, Dickson also leads the Big Red with a block percentage of 6.6, per KenPom, and also has the highest assist rate on the team.

Dickson will likely be tasked with shadowing Edwards on defense, meaning another smaller assignment for the Syracuse center like he had in the second half against Georgetown and Monday against Brown. But if Cornell places Dickson in the high post to facilitate its offense, that could cause defensive lapses to emerge again for the Orange.

The post Opponent preview: What to know about Cornell, SU’s final nonconference game appeared first on The Daily Orange.