Georgia Tech (1-1, 1-0 Atlantic Coast) and Syracuse (0-2, 0-2) are set to break in the newly-renovated Carrier Dome on Saturday at noon. The Yellow Jackets are coming off a 49-21 loss to No. 13 Central Florida that featured turnovers and redzone executions. SU also dropped its second game of the season, falling to No. 25 Pitt 21-10.

Notably, the game won’t be on local TV in central New York because of a scheduling conflict with the Yankees, but it can be streamed on ACC Network Extra or the Fox Sports Go app.

Here’s what you need to know about Georgia Tech before the game.

The game was the two teams’ first meeting with Syracuse in the ACC, and it was not a pleasant welcome into the conference for the Orange.

Georgia Tech gets it done with a strong running game and a well-balanced defense. Like Syracuse, GT plays both freshmen and sophomores at important positions, including quarterback.

Although they’ve moved on from their patented triple option offense, the Yellow Jackets have still run the ball on 84 of its 155 plays (54%). Both starting quarterback Jeff Sims and running back Jamious Griffin average at least five yards per carry.

Defensively, Georgia Tech is about as stout against the pass as it is against the rush, as shown in the predicted points added graph. The higher up and to the right a team appears on the graph, the more successful a team’s defense is. The x axis measures predicted points allowed on passing plays and the Y axis indicates the same for rushing plays. 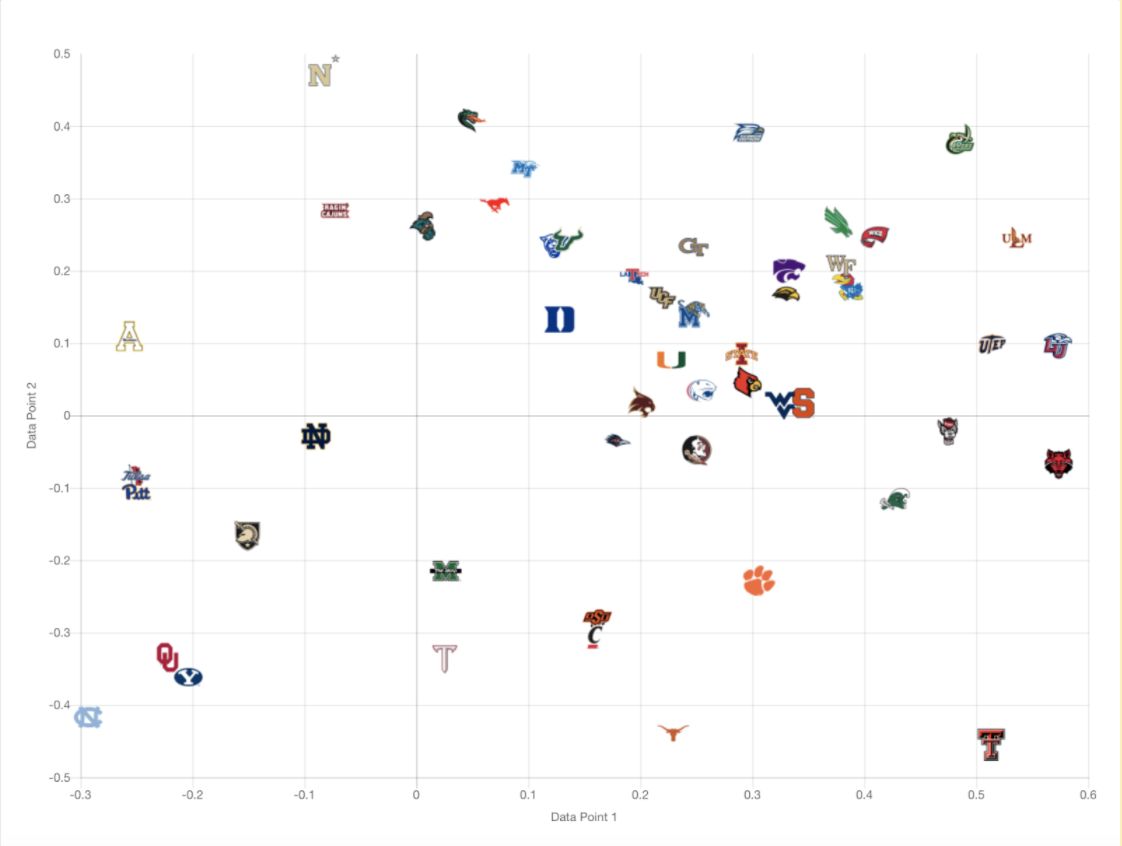 Syracuse will need to force Sims into turnovers and possibly score defensive touchdowns, based off its recent quarterback play. Judging by the past two games, the offense is a lost cause. The unit is so far away from clicking that Babers said the quarterbacks, offensive line and receivers share blame equally.

Stopping the rush will also be key for Syracuse. Syracuse’s defense has impressed so far, but showed some signs of weakness against Pittsburgh when the Panthers called jet sweeps and outside runs. Open-field tackling will be at a premium, but Georgia Tech may try to exploit the defensive back-heavy 3-3-5 with runs to the edges. SU will need a huge game from the defense to stay competitive with Georgia Tech.

Out of all teams to play two or more games in 2020, Georgia Tech has the sixth-highest pressure rate, per ESPN’s David Hale. The Yellow Jackets have only recorded five sacks but have pressured opposing QBs on 42.7% of plays.

That doesn’t bode well for starting quarterback Tommy DeVito, who’s been sacked seven times in each of the last two games.

David Curry, a redshirt senior in his sixth season at GT, leads a front-seven as a linebacker. The 2019 All-ACC honorable mention has a sack and 14 tackles through two games. Next to Curry, LB Quez Jackson leads the Yellow Jackets in tackles, having 18.

Also in the top-10 in pressure rate are future Syracuse opponents Duke, Clemson and Notre Dame. Don’t expect DeVito and SU’s offensive line to catch a break any time soon.

As Jeff Sims goes, Georgia Tech’s offense goes. The true freshman has already put his mark on the season and projects to lead the Yellowjackets in both rushing and passing. He’s the first true dual-threat quarterback the Orange have faced this year, and there’s minimal tape on him.

Sims rushed for 82 yards and threw for 244 more against No. 13 Central Florida last week, but he also threw two picks and lost a fumble. Sims threw two picks in GT’s season-opener versus Florida State as well. He’s a dynamic playmaker, but Syracuse’s defense appears poised to force him into some rookie mistakes.