Syracuse is coming off a last-second, 33-30 loss at Florida State last Saturday. Next, the Orange will face the Atlantic Coast Conference’s highest ranked team, No. 19 Wake Forest. The Demon Deacons are undefeated and are coming off a tight 37-34 win over Louisville.

Wake Forest has notched blowout conference wins over Virginia and Florida State, and with Clemson’s two losses, is on pace for its first appearance in the ACC Championship game since 2006.

“They’re a close family over there. They play well together, they care about each other, and I’m happy for their success,” head coach Dino Babers said of WF.

Here’s everything to know about the Demon Deacons ahead of their matchup with SU on Saturday afternoon in the Carrier Dome.

The two teams met last year on Halloween in Syracuse, with Wake Forest pulling away for a 38-14 win. Without starting quarterback Tommy DeVito, Babers started Rex Culpepper at quarterback. Culpepper threw for only 85 yards and tossed two interceptions as well. He was later pulled for true freshman JaCobian Morgan, who went 7-for-7 for 57 yards and a touchdown. The loss was part of SU’s eight-game losing streak to end the season.

The Demon Deacons got out to an early 10-0 lead before Culpepper connected with wide receiver Nykeim Johnson for a 21-yard touchdown in the second quarter. But Wake Forest responded with 28 straight points, including two touchdowns runs by Kenneth Walker III and a pick six by Gavin Holmes.

Syracuse totaled just 221 total yards of offense compared to WF’s 437. The Orange were just 3-for-11 on third-down conversions, too. Wake Forest quarterback Sam Hartman threw for 250 yards, including an 80-yard touchdown pass to Jaquarii Roberson in the third quarter. Starting in place of Sean Tucker, SU running back Cooper Lutz took 15 carries for 81 yards and tied for a team-high four receptions in the loss.

“I’m going to try to play for a winning season,” Babers said postgame. But after the home loss, Syracuse dropped its final five games, finishing with its worst season since 2005.

Head coach Dave Clawson has spent eight years building the Demon Deacons into one of the top teams in the ACC. They have played in five straight bowl games and went 8-5 in 2019 — ranking as high as No. 19 in the AP Poll. Despite largely playing with under recruited players, Wake Forest has found success using a creative offense.

Leading the offense from under center is Hartman, who has a 63.8% completion percentage with 11 touchdowns and two interceptions. The redshirt sophomore entered the season in the top 10 in program history in passing touchdowns, yards and completions, among other categories. He played in the Carrier Dome in 2019, when Syracuse won 39-30 in overtime on the last weekend of the season.

Hartman isn’t the most efficient passer and tends to occasionally hesitate on passing attempts. Clawson simplifies Wake Forest’s offense and likes to use four or even five wide receivers to spread the field. The Demon Deacons also use Run-Pass Options, which help them open up the field offensively. 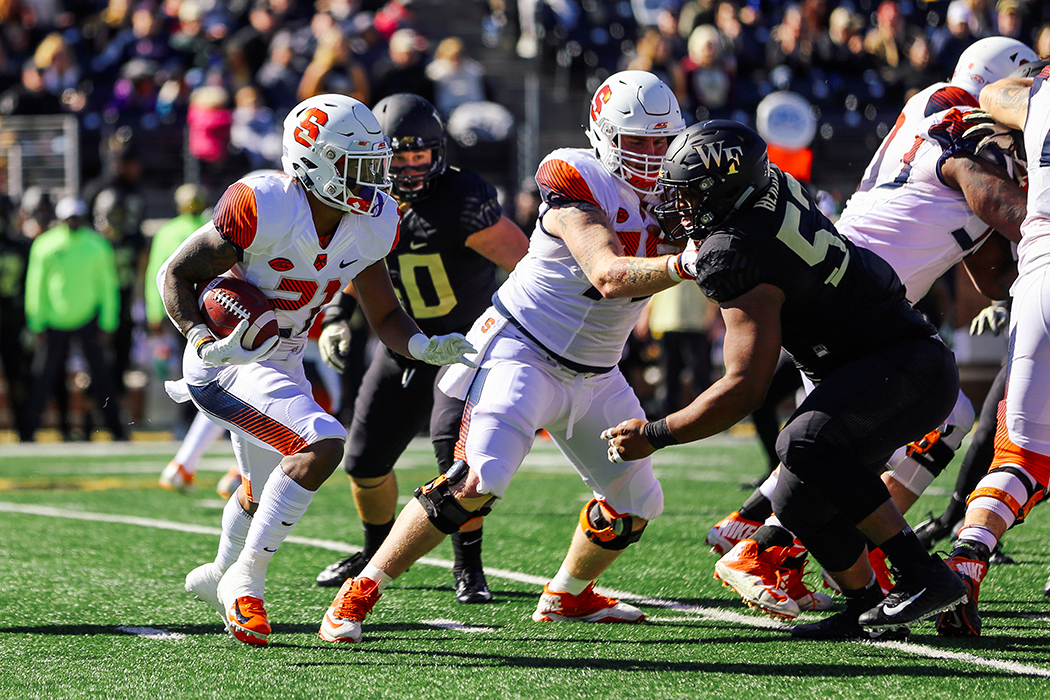 Wake Forest has four rushers with at least 30 attempts this season, including Hartman. Christian Beal-Smith leads the group, averaging nearly 5 yards per carry on 65 attempts. The offensive line can struggle to run block, but WF balances its run and pass games to lead its offense — which is averaging 38.4 points per game, second in the ACC.

Defensively, Wake Forest gives up over 400 yards per game — 11th in the conference — but only gives up 20.8 points per game — sixth-best. The Demon Deacons have struggled most at defending the run, as they give up the second-most rushing yards per game in the league. But defensive lineman Luiji Vilain has recorded 4.5 sacks, and as a team, Wake Forest hasn’t had a tough time getting to the quarterback, leading the ACC with 21 sacks, one ahead of the Orange.

The Demon Deacons have yet to face a formidable opponent — their first four opponents have combined for just four wins this season. Saturday’s game will also only be their second road of the season.

Syracuse has found the most success early this season by using Tucker and Garrett Shrader on the ground to lead the offense and getting defensive pressure. The Orange will again want to do that on Saturday to keep up with Wake Forest’s offense.

Tucker has run for over 100 yards in his last three games and has taken 24 or more carries three times this season. For SU to pick up a win, Tucker again will have to carry the offensive load. Shrader will likely make his third straight start at quarterback after running for three touchdowns against Florida State, and without No. 1 receiver Taj Harris, The Orange will likely focus their offense on running the ball with either Tucker or Shrader. This will be especially true with the Demon Deacons’ poor run defense.

Defensively, Syracuse will need to get pressure on Hartman. Cody Roscoe is tied for the ACC lead with 5.5 sacks but was held sackless against FSU, when the Orange recorded just two sacks. SU will have to get back to the pressure it created on Liberty quarterback Malik Willis — who was taken down six times in the loss. With Wake Forest using only five or six blockers on most passing plays, the Orange should have an easy time getting pressure and making Hartman uncomfortable.

Wake Forest’s 13 made field goals this season lead the ACC by a wide margin and is ranked No. 1 nationally, too. Junior kicker Nick Sciba has yet to miss a field goal this year and is the NCAA’s record holder with 34 straight made field goals. He’s also the most accurate kicker in ACC history and was a semifinalist for the Lou Groza Award last season.

While Sciba is one of the top kickers in the country, the high number of field goals show how much more lethal the Demon Deacons’ offense could be. Despite a red zone conversion percentage of 93.5%, Wake Forest has the most red zone field goals in the ACC with 10. Through four games, the WF offense has had no trouble moving the ball and putting points on the board but has shown a tendency to be held short of the end zone.

Roberson was named a preseason All-American by Pro Football Focus after leading the team in receptions and yards last season. He finished the 2020 season with four straight 100-yard plus games, too. The redshirt junior recorded seven catches for 130 yards last year against Syracuse and is coming off his best performance of this year against Louisville, bringing in six balls for a season-high 135 yards.

The post Opponent Preview: Everything to know about No. 19 Wake Forest appeared first on The Daily Orange.