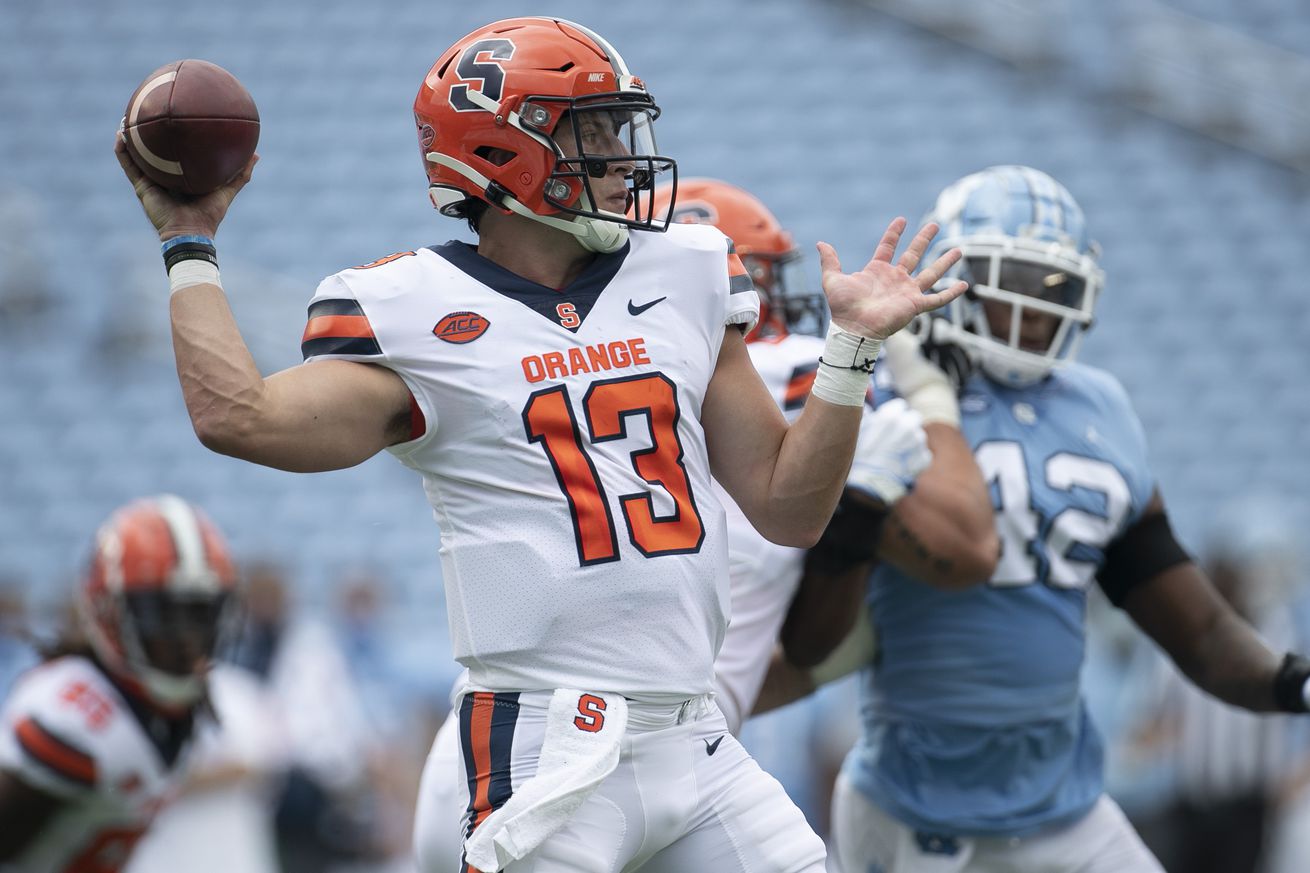 This story should be about missed opportunities for the Syracuse Orange. SU had multiple opportunities in the first half to put points on the board. However, the Orange offense couldn’t get things going in the 2nd half as the North Carolina Tar Heels pulled away to a 31-6 victory.

The first half numbers for Syracuse looked promising in comparison to North Carolina. Through two quarters of play the Orange only had 85 less yards of total offense and limited the Tar Heel offense to one touchdown on the first drive of the game. Sam Howell suffered a lot of pressure throughout the first half from the ‘Cuse defense. He threw a tipped pick to Mikel Jones, took a sack from Josh Black, and was hurried and hit multiple times.

The offense also had their moments for Syracuse. Tommy DeVito saw openings in the defense created by Taj Harris, Sharod Johnson, and Anthony Queeley, but those scoring opportunities were missed due to dropped balls or overthrows. SU steadily made its way up the field but couldn’t convert where it mattered most — the red zone.

Syracuse reverted to its usual style of play in the red zone: rushes up the middle. The Orange couldn’t move the ball forward on the ground inside the 20. That forced DeVito to either throw the ball away or take coverage sacks. Players lauded new offensive coordinator Sterlin Gilbert for adding new “wrinkles” to the Syracuse offense, but what we saw against the Tar Heels feels like more of the same issues are still around especially during scoring opportunities.

“I thought I saw the same in both halves,” said Babers. “It comes down to when you have an opportunity, you have to make plays.”

Part of the offensive struggles comes down to rushing problems. DeVito was Syracuse’s leading rusher with 30 yards, but he got most of those on scramble plays escaping from the pocket. Jawhar Jordan and Markenzy Pierre combined for 48 yards on 19 attempts. The majority of their rushes also went right up the middle for zero to three yards and didn’t create any tempo for the Orange offense.

What was shown from the North Carolina offense is what we should see from Syracuse in terms of their running back usage. Yes, the Tar Heels did have their backs run up the middle but there was significantly more variety in terms of runs to the outside or shovel passes that created open space for Michael Carter and Javonte Williams. Jordan and Pierre spend most of the game running into bodies while Carter and Williams were given the opportunity to find the open field.

The duo of Carter and Williams combined for 135 yards on 21 rushes and Williams tacked on three rushing touchdowns in the second half against a tired and worn-out Syracuse defense. They opened up the opportunity for Howell to exploit one-on-one matchups against younger Orange defenders such as Garrett Williams and Neil Nunn. While both did a good job, there was only so much they could do by themselves when Howell was targeting their matchups.

The dynamic Syracuse tight ends were also surprisingly quiet. Aaron Hackett was targeted only once by DeVito and Luke Benson only got one target from Rex Culpepper in garbage time. What was expected to be a core part of the Orange offense was nowhere to be seen in Chapel Hill.

“Sometimes teams are trying to take away targets,” said Babers. “Based off of coverages and where guys are moving in space, the ball may go to someone else. We understand that those guys are good players and we’re going to try to do things that we need to do to get them the ball.”

The score doesn’t reflect it, but the Syracuse defense was solid. There was a lot to like about how the 3-3-5 performed, but the Orange offense couldn’t stay on the field long enough for the defense to recover from the tempo that was set by Howell, Carter, and Williams. In the end, UNC gained 176 more yards of total offense in the second half alone while the Syracuse offense struggled to get anything going.

It feels like basketball season, where Syracuse is relying on its defense to carry them to game victories. However, as was shown today, the defense needs the support of the offense to keep teams in check. The defense did enough to show that Syracuse can win games against strong teams. The offense needs to show that it can show up to the party when asked or it’s going to be another long season in Central New York.