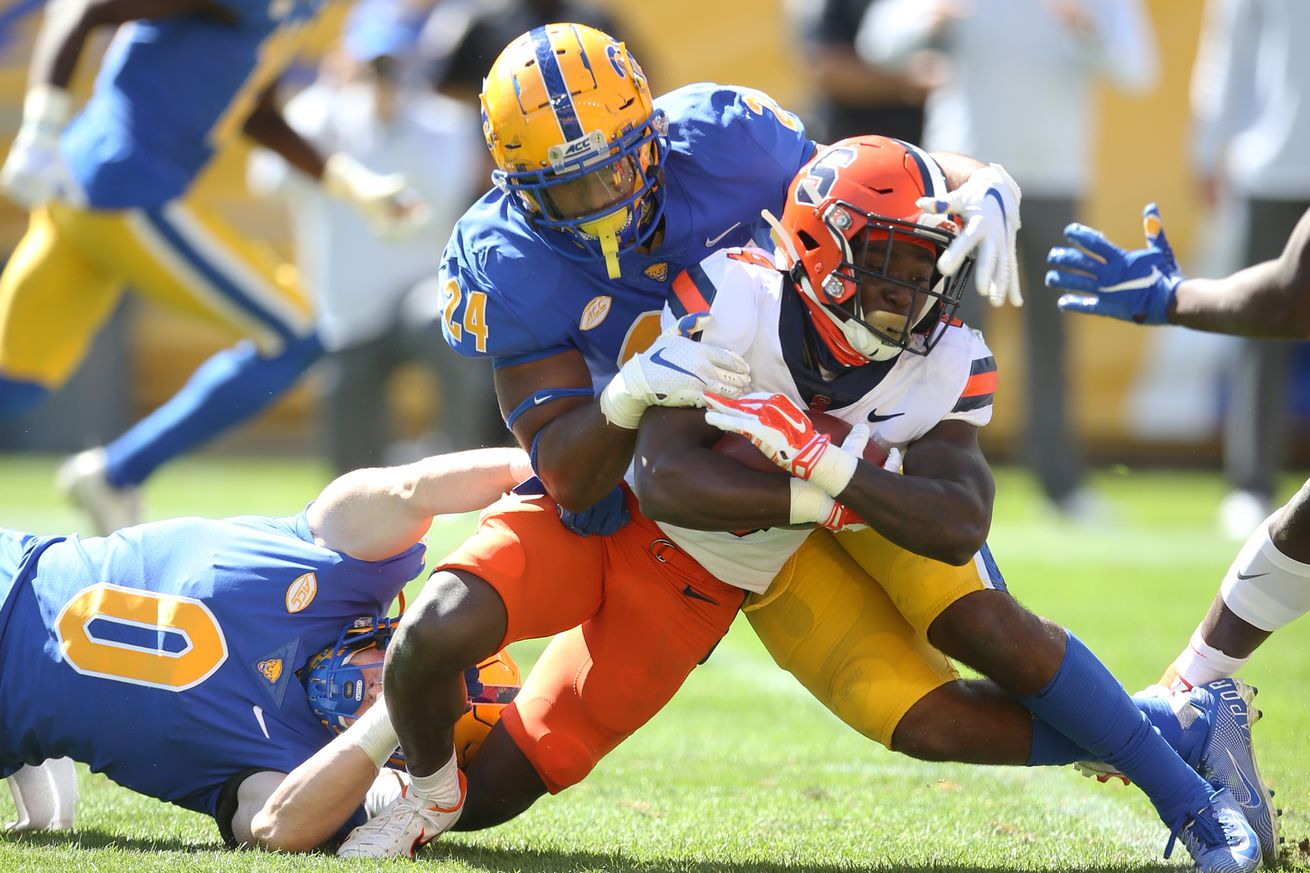 Not the best showing to rejuvenate hope in fans

In the second half, Syracuse ran 31 plays and gained only 52 yards. And it’s not like Pitt played a stellar game of football either. Multiple penalties and special teams errors put the Orange in prime position to score with good field position. Yet the Orange offense continued to struggle at establishing any sort of tempo.

“You gotta have faith,” said Dino Babers. “You’re definitely wishing some positive things would happen on certain calls and you’re trying to get away from some calls that maybe people aren’t recognizing or seeing it the same way you’re seeing it and the ball is going in different places than what you know it should be going.”

The play calling somewhat improved but questionable decisions on third down and in the redzone continues to plague the effectiveness of the offense. Syracuse was 2-for-14 on third downs and have yet to find the endzone on a redzone opportunity this year. The Orange only gained 10 first downs against the Panthers, who gained 23 themselves.

“I think we need to take a long, hard look at what we do in the redzone,” said Babers.

For the second week in a row, SU allowed seven sacks to an opposing defense. This does come with the caveat that both UNC and Pitt have players who have strong defensive units at their disposal. However, with the Tar Heels last week there seemed to be more coverage sacks allowed. Against the Panthers, linemen seemed to get beat multiple times one-on-one and the pocket seemed to collapse incredibly quick.

Speaking of the quarterbacks, Tommy DeVito did not have a good game. I really want to defend DeVito because I think he has the potential to be a top quarterback in the ACC. However he struggled throughout the day today against the Panthers. DeVito went 9-of-15 for 32 yards and a pick. His longest pass went for 10 yards.

I know fans will be clamoring for Rex Culpepper to take over the job as the starting QB, especially after his 69-yard touchdown pass to Harris. First of all, Harris made that a touchdown. He broke multiple tackles and the initial pass went for about 30 yards. Harris ran from about the 40 into the endzone. If you take Harris’s touchdown out of the equation, Culpepper went 3-8 for 19 yards.

Culpepper showcased many times that he had better reads on his receivers than DeVito has. DeVito tends to stick on the first read of a play for too long and sometimes is too stubborn to consider any other route. However, the accuracy of Culpepper’s passes left a lot to be desired. There’s a reason that DeVito is still QB1.

“We’re going to evaluate the tape based on situationally what’s going on,” said Babers. “We’re always going to make the decision that we think is the best for our family. Both of these guys are in it to win it. Speculation over that stuff is not going to do anybody any good.”

If you’re looking for another unit to blame for the loss, it should come back to the offensive line and blocking in general. The wide receivers and running backs did what they could given the guys in front of them. SU went back to bubble screens for the wide receivers, but the blocking on most of them were atrocious. We saw more fighting for yards from the running backs and when the offensive line gave holes to them, the RBs did a great job at exploiting them for good yardage chunks.

But the offensive line needs to do more. If DeVito is going to continue sitting on his first read, the pocket cannot collapse that quickly. The holes that opened up for the running backs were good, but more often than not they were running into their own guys. Yes, these things are easier said than done. However, the the line seemed to regress from the UNC game to the Pitt game.

The defense cannot do it all. Maybe you would expect more from the defensive line, but the 3-3-5 isn’t designed for them to stand out. The linebackers showed a lot of improvement from week one to week two. Geoff Cantin-Arku and Stefon Thompson caused a lot of havoc with pressure and Mikel Jones picked up another interception. The linebackers did a much better job at containing the run, holding the Panthers to just under three yards per carry.

“I think the defense has played extremely well through two games,” said Babers. “It might be some of the best defensive football since I’ve been here.”

The secondary showed some signs of struggle however. It wasn’t necessarily a bad performance from the unit, but the youth in the secondary struggled under the constant targets their way from the Panthers. Ja’Had Carter in particular struggled throughout the entire game, leaving his matchups wide open multiple times. Garrett Williams performed ok, leaving only a couple of guys open but staying with his matchups for the most part. The only worrying thing is that Pitt found a couple of guys open in zone coverage which led to some bigger games.

Special teams was a big improvement from last week. Syracuse got lucky as a couple of penalties on that side didn’t hurt that much. Nolan Cooney was much better punting and pinning Pitt deep in their own territory. Andre Szmyt made his only field goal attempt of the day and the coverage on both punt and kick returns were good.

The overarching theme of the game however is the offense. The play calling hasn’t helped in establishing the tempo that Babers is looking for in his offense. The offensive line has not looked good through two games. If the tempo and speed of the Orange offense doesn’t return, Syracuse is looking at a long year ahead of them.