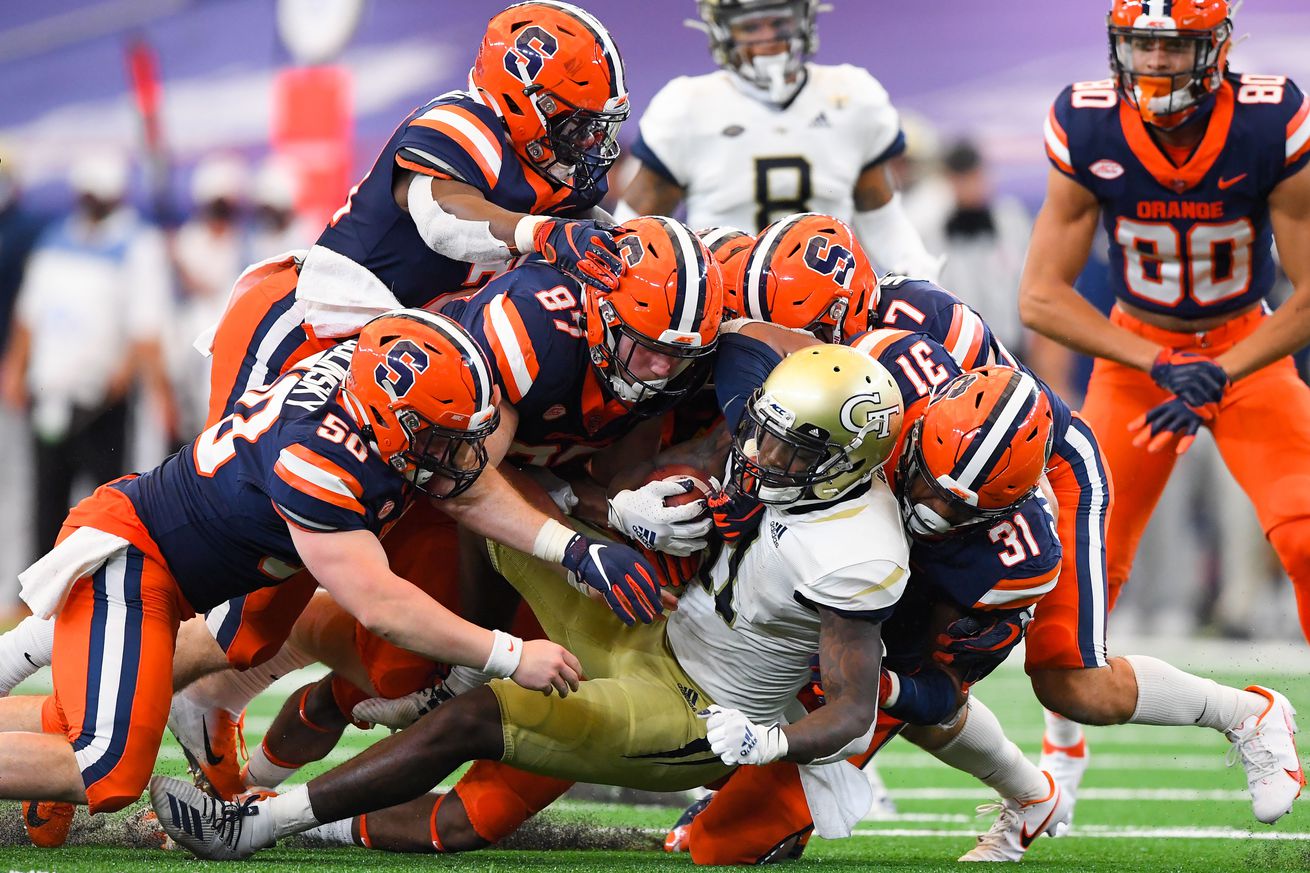 To say that the first three games of the 2020 season for the Syracuse Orange have been a roller coaster is probably an understatement. When the dust settled, SU had lost to two ranked teams and won against a program projected to finish last in the conference during the preseason. That’s probably been expected, but the stats can tell us a lot about how effective Syracuse performed in its first three games.

That’s where the grades at Pro Football Focus come in handy. And while they may not be the final determinant factor in whether the Orange has performed above or below expectations, the numbers can tell us which parts of the team have been a strength or a weakness. With that, let’s examine the more notable grades from Syracuse in 2020.

Tucker turned heads against Pittsburgh when he pulled off some impressive runs on just four carries. He earned the highest offensive PFF grade that day for Syracuse with a 73.6. Against Georgia Tech, his grade wasn’t quite as high with a 69.5, but he still averages out to be the best offensive player for Syracuse this season. Tucker’s 72.6 offensive grade this season is a testament to how important he’s become to the Orange offense in just a short amount of time.

There were multiple questions about the effectiveness of the run game after Abdul Adams and Jarveon Howard, but Tucker has managed to alleviate some of that pain with one impressive performance. Time will tell if Tucker can produce the same numbers that he did against the Yellow Jackets, but PFF already has him marked, but just barely because…

Tommy DeVito hasn’t been as bad as some think

DeVito has quietly been good for Syracuse in two of its three games. In fact, the Orange quarterback barely missed out on the top grade so far this season with a 71.6. DeVito was the highest offensive player for Syracuse against UNC with a 74.8 and against Georgia Tech with a 72.0.

Some fans have been quick to pin a lot of the blame for Syracuse’s offensive struggles on DeVito, but not everything can be attributed to him. The offensive line hasn’t been firing on all cylinders and it shows in the passing game due to the fact that…

DeVito has dropped back to pass 97 times this year. Of those dropbacks, the Orange quarterback has not been pressured 62 times while he’s been pressured 35 times. When he’s not pressured, DeVito has a 91.0 offensive grade. That grade falls off a cliff to a 30.3 when he is pressured.

Of course, there’s no denying the fact that keeping pressure off DeVito is much easier said than done. However, the offensive line hasn’t exactly showered itself in glory in pass protection with DeVito getting sacked 16 times this year. Perhaps more alarming is that the offensive line gave up 11 sacks when a blitz wasn’t coming from the defense according to PFF. It’ll be interesting to see if Steve agrees with that but if that number is even remotely close to being correct, that needs to be fixed.

Those numbers would most likely make DeVito a little jumpy and nervous in the pocket. Of course he would like the run game to develop behind him to take some of the pressure off but…

The run blocking grades are not great

This might be something we would want Steve to look further into (sorry for potentially giving you more work). How much of the running struggles that we saw from the first two games of the season came from the running backs versus the offensive line? That could be a big factor as to why that area of the Syracuse offense appeared to be stagnant.

The offensive numbers haven’t been impressive, but fans have lauded Tony White for an innovative defense. You’d probably expect those numbers to pop off the chart, and one number does in particular…

Coverage has been excellent for Syracuse

The Orange have a 77.1 coverage grade as a team through the first three games of the season. That’s good enough for the third highest grade in the ACC behind Pitt’s 86.4 and Notre Dame’s 80.2. The 3-3-5 has been pretty impressive in stopping most aerial attacks, and the grades back that sentiment up.

Perhaps somewhat surprisingly, the highest grade in coverage came from a player who only started one game. Rob Hanna got his first start and game action of his collegiate career against Georgia Tech and put up an 81.4 coverage grade against the Yellow Jackets, the highest from any Orange defender in a game. Trill Williams is the highest graded regular starter in coverage with a 73.8 grade for the season so far.

Most fans love the defense, but an area that could derail the momentum of the new scheme is…

Missed tackles plagued SU’s ability to stop the run effectively, and that could prove costly for the Orange in closer games. Syracuse ranks 11th in the ACC with a 58.3 tackling grade. Dino Babers loves to preach fundamentals, and that is an area where SU needs to improve.

That’s it for my notable PFF grades and stats. What is an area of Syracuse football you would be most interested in a closer look at with the help of PFF? Comment down below.