STONY BROOK — Tiana Mangakahia took an outlet pass and pushed it up the floor. She thought she had a player on the right wing. Instead, her pass floated to the vacant spot where she wanted her center to cut, and the ball one-hopped out of bounds.

The fifth-year guard motioned what she intended to her teammate as coach Quentin Hillsman turned his back to the floor and paced down the sideline. Midway through the second quarter, the Orange were leading 21-13, a lead they’d maintained all game. But the turnovers continued piling up.

With the pandemic barring fans from attendance and forcing players to sit inverted on two rows of seating rather than the conventional one, No. 23 Syracuse (1-0) battled through its own obstacles Sunday to defeat Stony Brook (0-2), 50-39. Mangakahia led the Orange with 16 points, three assists and seven rebounds in her first game since March 2019 after she beat breast cancer just over a year ago. SU turned the ball over 21 times, but its defense forced one more to keep the lead for the entirety of the game.

“When you play against a team that presses, it kind of takes you out of your halfcourt offense,” Stony Brook head coach Caroline McCombs said. “We just were never able to get in a rhythm.”

Both teams got off to a sluggish start on offense. Guard Kiara Lewis dropped her defender with a jab-step and quick change of direction but traveled to the basket, turning the ball over on SU’s first possession. Syracuse answered with a full-court pressure on the other end.

The Orange rode out the 1-2-2 press for the remainder of the contest, collapsing into its base 2-3 defense once the Seawolves crossed midcourt. To keep the tempo, Hillsman cycled through his bench, with 11 players seeing the floor for the Orange. Junior Emily Engstler, who started every game for SU last season, wasn’t one of the 11.

“It’s nothing detrimental,” Hillsman said. “She’ll be fine, she’ll be back soon.”

Amaya Finklea-Guity opened the scoring with a lay-in on the left block. This time she and Mangakahia were on the same page, as the no-look pass was placed where only she could catch it and finish in one motion.

Stony Brook beat the press back down the floor and created two good looks from beyond the arc. Both attempts missed, as would all of the Seawolves’ first seven from the field. The Orange didn’t let Stony Brook shoot any more than that in the first four minutes, forcing a shot-clock violation to go with a Mangakahia steal and multiple forced turnovers. 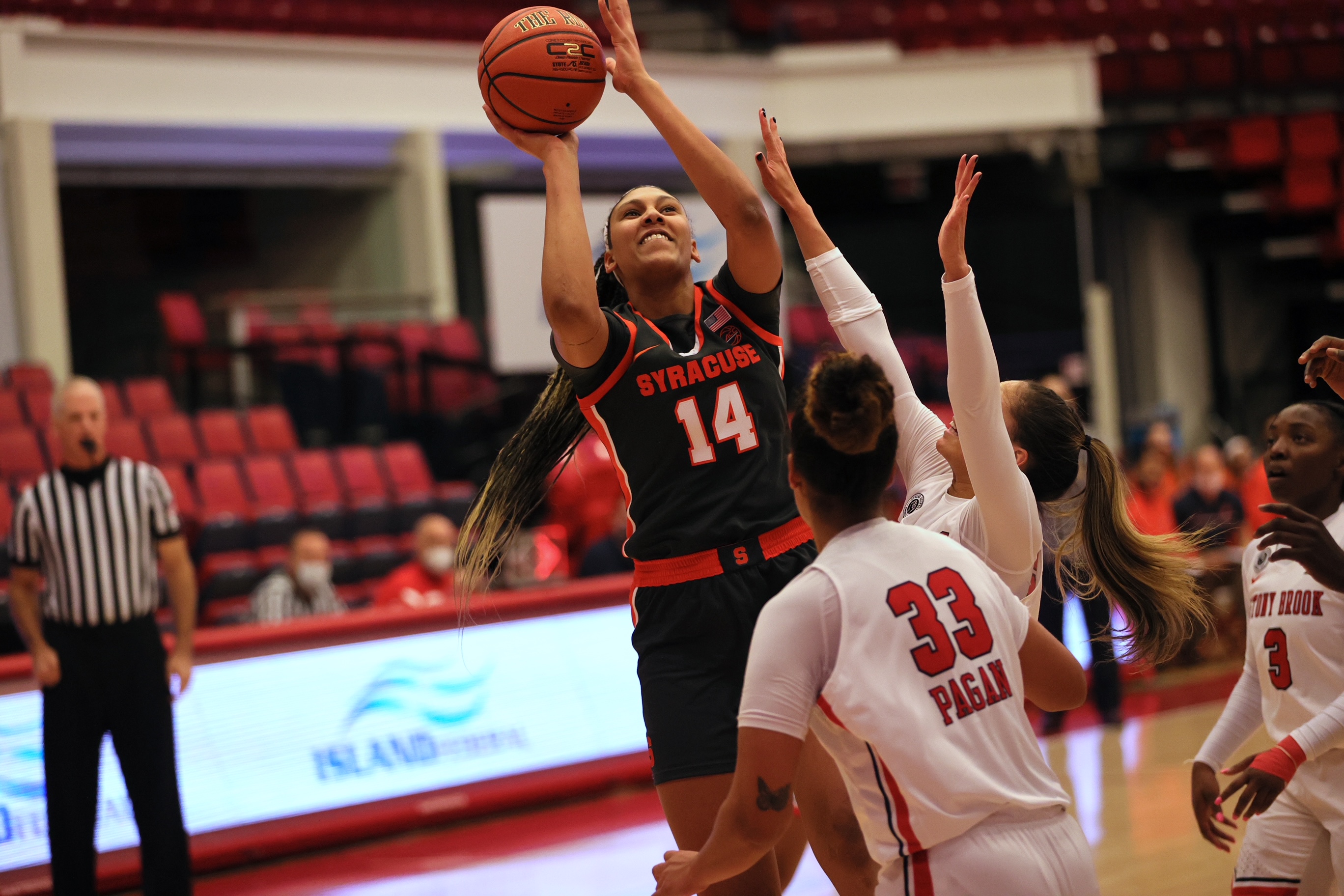 Mangakahia was subbed out after the initial 4-0 run. Her breaks were brief, totaling 36 minutes in a seamless return to her workload from two years ago. She and 6-foot-7 freshman Kamilla Cardoso combined for 30 of the Orange’s 50 points — besides the two, the offense was largely ineffective. On one possession in the opening frame, Cardoso corralled a Taleah Washington miss over the head of a defender, missed the initial put-back but rebounded it and recorded her first two career points with a fall-away bank shot.

“I’m so proud of her and everything that she did,” Mangakahia said. “She’s a hard worker, she really cares about her performance and the team.”

In 13 minutes on the court, Cardoso totaled 14 points, seven rebounds and two blocks. She, along with the 6-foot-4 Finklea-Guity, took away any semblance of an inside offense for the Seawolves. Stony Brook was forced to hoist 24 3-pointers, converting 12.5% from deep.

But Syracuse didn’t do enough offensively to pull away. Late in the second quarter, SU forced another shot-clock violation of Stony Brook, but Lewis returned the favor by dribbling aimlessly for 10 seconds before airballing a deep 3-pointer. Freshman Priscilla Williams airballed her first two collegiate shots and added two charges to erase fast-break opportunities for the Orange.

“We were trying one pass, put your head down and drive, and it’s not going to work against a great defensive team,” Hillsman said. “You need to get to the second, third, fourth sides of the floor.”

Still, Syracuse maintained a nine-point lead into the final minute of the half. SU freshman Khamya McNeal nearly stole the ball from Seawolves’ guard Asiah Dingle, and the shot clock dwindled once again. She heaved a desperation shot from the ‘Seawolf’ logo that went straight into the basket. Lewis missed another contested three on the Orange’s final possession, and their lead was just 26-20 after the first 20 minutes.

Syracuse continued to trudge through the third quarter, turning the ball over another nine times, the same amount of points it would muster during those 10 minutes. With 1:40 minutes left in the third, Hillsman turned and rested his head on the scorer’s table for a good 10 seconds.

“I was a little frustrated with our play,” Hillsman said. “We just need to play better. That’s all.”

The Orange tidied up their play in the fourth quarter, only turning the ball over twice and holding the Seawolves shooting under 35% for the fourth-consecutive quarter.

“I always think that, no matter what the score is, no matter if we win by 50, there’s always stuff we can improve on,” Mangakahia said, “And I think this was a good first game for us.”