Digna Strautmane caught a bounce pass from guard Kiara Lewis on the left wing while the Orange were down 24-14 early in the second quarter. The senior immediately rose for SU’s 11th 3-pointer in less than 11 minutes of play. Already in the first quarter, SU had missed nine of 10 shots from deep, and this one was no different. Strautmane’s shot clanked off the rim.

On the next possession, freshman Faith Blackstone attempted an identical shot from the same spot that Strautmane stood moments earlier. Blackstone’s 3 didn’t even graze the rim, as the air ball fell to the right side and out of bounds.

Two possessions later and three seconds into the shot clock, the Orange once again jacked up a 3, this time by Lewis. Syracuse’s shot bounced off the rim once again, leading to Penn State’s Johnasia Cash rebounding and outletting to begin a fast break.

In those final two minutes, Syracuse’s press forced Lady Lion turnovers. After Penn State inbounded the ball to Makenna Marisa, Lewis sprinted toward the guard with her hands raised above her head. Marisa attempted a cross-court pass, but the ball bounced off of a jumping Lewis’ hands. Once Lewis’ feet found the ground, she shifted right, collected the ball and took two swift steps to the hoop for an easy layup.

Just over one minute into the game, fifth-year Tiana Mangakahia began a fast break before pulling up from deep with no one in front of her. But after Lewis’ layup, Mangakahia began another fast break by tipping away a Lady Lions pass at the top of the zone. Rather than pulling up again from three, Mangakahia laid the ball off the glass to cut Penn State’s lead to one. Fifteen seconds later, Lewis grabbed a defensive rebound and dribbled all the way down court for another easy layup to give SU the lead. 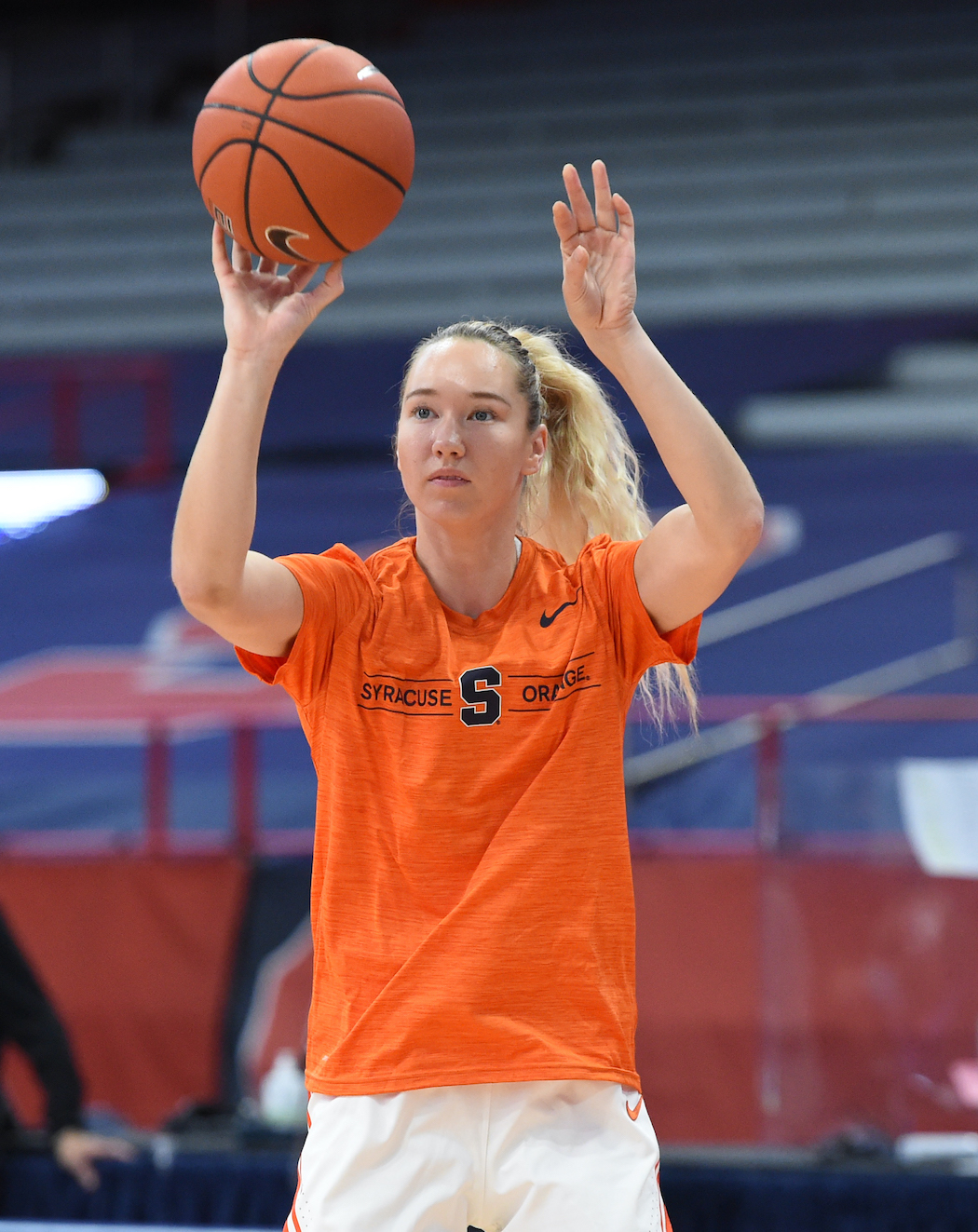 Syracuse began to find entry passes into the low post in the second half. Strautmane swung the ball from the corner to Emily Engstler at the top of the key on a fast break. Engstler immediately fired a sidearm pass to Amaya Finklea-Guity, who converted the easy shot after sealing off her defender under the basket.

Of Penn State’s nine players to step on the hardwood, just two were forwards. SU capitalized on its post depth against a Lady Lions team whose tallest starter, Anna Camden, is only 6-foot-3. After converting just 12 field goals in the first half, Syracuse equaled that total in the third quarter alone.

“We started getting an advantage inside, so we just started throwing the ball inside, started pushing them at the rim,” Hillsman said. “Forty-six points in the paint, and that was big for us, to be able to get the ball inside and play at the rim.”

By focusing on interior scoring, the Orange forced Cash into foul trouble. With three minutes left in the third quarter, Finklea-Guity collected the ball under the Lady Lions cup, rose and drew Cash’s fourth foul.

With the 6-foot-2 Penn State starting forward forced to the bench, Syracuse continued to score in the paint. Mangakahia easily strove past defenders for an uncontested layup, pushing Syracuse’s lead to 57-50 in the third quarter.

While Mangakahia and Lewis finished just 2-15 from three, the star guards worked the ball around the floor in the second half. In the latter 20 minutes, Mangakahia often let the shot clock dwindle and teammates get set before directing the offense. She finished with a team-high eight assists and nine turnovers.

“I know she’s always looking at the rim and always looking to dump off,” Lewis said. “Tiana’s one of the best assists persons in the game right now, and I know every time she drives, she’s looking to pass, so that’s what I did. I cut to the rim.” 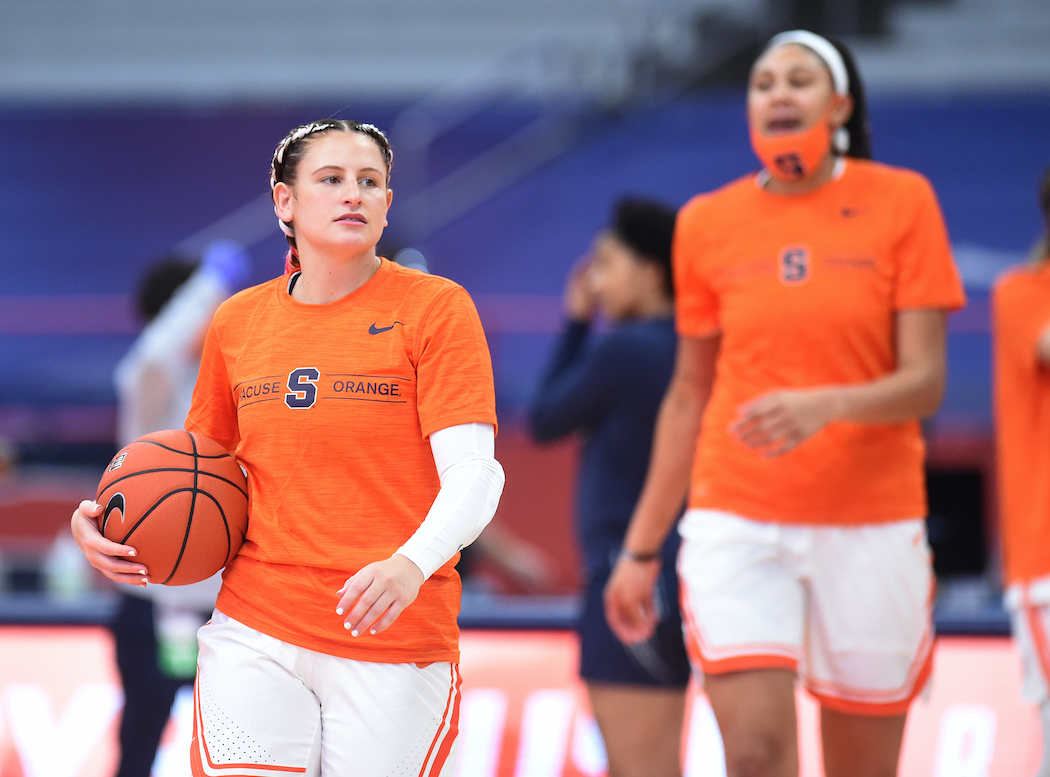 Mangakahia cut to the rim twice, and Lewis mirrored the point guard. As defenders jumped to contest Mangakahia, the fifth year simply dumped the ball off to Lewis, SU’s leading scorer from last season. Those two passes led to four of Lewis’ game-high 26 points.

But Lewis wasn’t the only beneficiary of the slower pace and Mangakahia’s no-look passes. Finklea-Guity — who finished with 10 points and nine rebounds — positioned herself behind defenders, creating an easy outlet for Mangakahia and easy layups.

With under 5:30 remaining, Penn State started to claw back with open 3s against SU’s zone, cutting SU’s lead to five points. Instead of pushing the pace in response as it had in the first quarter, Syracuse continued to play a slower game as Hillsman yelled out offensive sets from the sideline. When Mangakahia or Lewis began to sprint downcourt on fast breaks, Hillsman stepped inches from the court, waving his hands high in the air to halt the guard.

As the clock continued to tick, Syracuse continued to dribble. With four minutes remaining and a shot clock dwindling, Mangakahia missed a field goal from the elbow, but Finklea-Guity grabbed the board and notched another easy bucket to finish her fourth basket.

Behind a 6-foot-7 Kamilla Cardoso and fourth-year bigs in Finklea-Guity, Strautmane and Maeva Djaldi-Tabdi, Syracuse was able to dominate down low in the second half. Fast breaks and Mangakahia’s offensive prowess allowed Lewis to score the third-most points in a game in her career and her first double-digit game this season.

“Our veterans came in, did a really good job of stabilizing the game,” Hillsman said. “(Lewis) was amazing in the game. She made some shots and got us going.”

In the first two games, over 42% of Orange shots were behind the arc. On Sunday, in the second half, just 32% SU’s shots came from behind the arc. It isn’t a long term strategy, Hillsman said, but the Orange showed it could win games down low.

“We were able to attack the rim, attack them on closeouts, because they started going behind the ball screens,” Hillsman said. “We’ll take it, but we understand we have some stuff to do to get better.”