It was a routine Sunday night for Rebecca Robinson as she watched her brother, former Syracuse player Miles Robinson, suit up for the United States men’s national soccer team. Rebecca, her fiance and her dog sat on the couch in their Alexandria, Virginia, apartment anxiously watching as a scoreless U.S. team headed to a 30-minute extra time period against Mexico in the 2021 CONCACAF Gold Cup Final.

It was nearly midnight in Virginia when Kellyn Acosta stood over the ball in the 117th minute, as the U.S. team was dealt a free kick roughly 30 yards away from goal near the left touchline. Acosta sent an inswinging service into the penalty box, aiming for one of the five U.S. attackers to run on to.

About eight yards away from goal was Robinson. He surged between two Mexican defenders for a perfectly timed diving header into the bottom left corner. Rebecca joyously screamed, likely startling her neighbors in the process. Her little brother had just clinched a rivalry win and a major trophy on the biggest soccer stage in North America.

“Just seeing him try to take off his shirt and running into his teammates and just seeing that pure joy on his face, I cannot even describe the feeling,” Rebecca said. “It was truly an overwhelming moment.”

But in Rebecca’s eyes, Robinson’s professional journey has taken shape almost too quickly. Robinson, now only 24, left Syracuse during his sophomore year after being drafted second overall by Atlanta United in the 2017 MLS SuperDraft. Since then he has won an MLS Cup and made nine appearances at center back for the national team, including six starts during the Gold Cup, where the U.S. allowed just one goal.

The day before each Gold Cup match, the U.S. would run through its set pieces, which Robinson was always a part of. For the championship game in particular, the team focused on targeting the back side of Mexico’s zone as they defended free kicks — the space Acosta had already told Robinson he was aiming for. 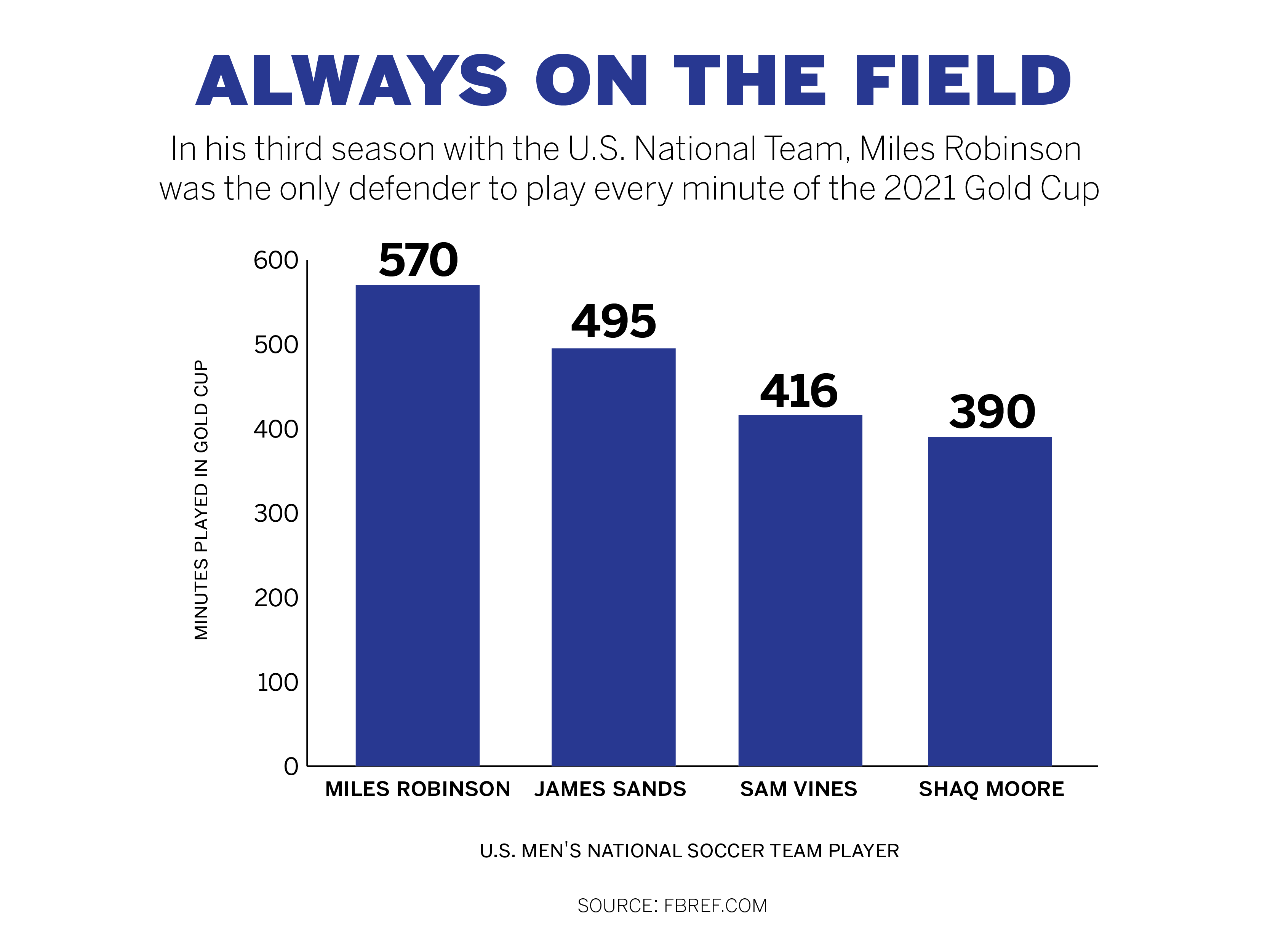 Knowing this, Robinson’s only task apart from finishing the play was to separate himself from the four Mexican defenders in his way. He shifted his route toward the aerial ball, positioning himself between the defenders rather than running through them as Mexico’s zone dropped further into the penalty box.
“Sometimes it comes down to just the accuracy of the ball or timing of your run, and I think both me and Kellyn were spot on with the accuracy and the timing,” Robinson said.

Robinson wasn’t the U.S.’ go-to option on set pieces until its final group stage game against Canada, when captain Walker Zimmerman suffered a tournament-ending knee injury. Each of Robinson’s three national team goals had been headers, something he made himself known for when he played at Syracuse.

He recalled that SU head coach Ian McIntyre — who also played as a center back — had always wanted his defenders to score as often as they could. In his two years with the Orange, Robinson scored nine goals, eight of them being headers. His goal scoring ability helped him win ACC Defensive Player of the Year in 2016 and heavily influenced his high MLS SuperDraft selection.

“Miles can add goals to his repertoire because he is so quick. He is so athletic and powerful that he’s a real mismatch and really tough to mark,” McIntyre said.

McIntyre started Robinson in each of the 42 games he played for Syracuse, where he was slotted on the right side of an unfamiliar three center back system during his freshman season. But the defensive trio that included then-fellow freshman Kamal Miller and then-sophomore Louis Cross led Syracuse to both its first-ever ACC tournament championship title and NCAA College Cup appearance.

Robinson was the only U.S. defender to play every minute of the Gold Cup, becoming the core piece of an ever-changing American defense. McIntyre attributes Robinson’s rise to an ideal starter to his athleticism and physicality, which allow the defense to be more flexible when he’s in the lineup. In the final match, the U.S. absorbed 62.9% of Mexican final third possession with Mexico recording 15 total shots. 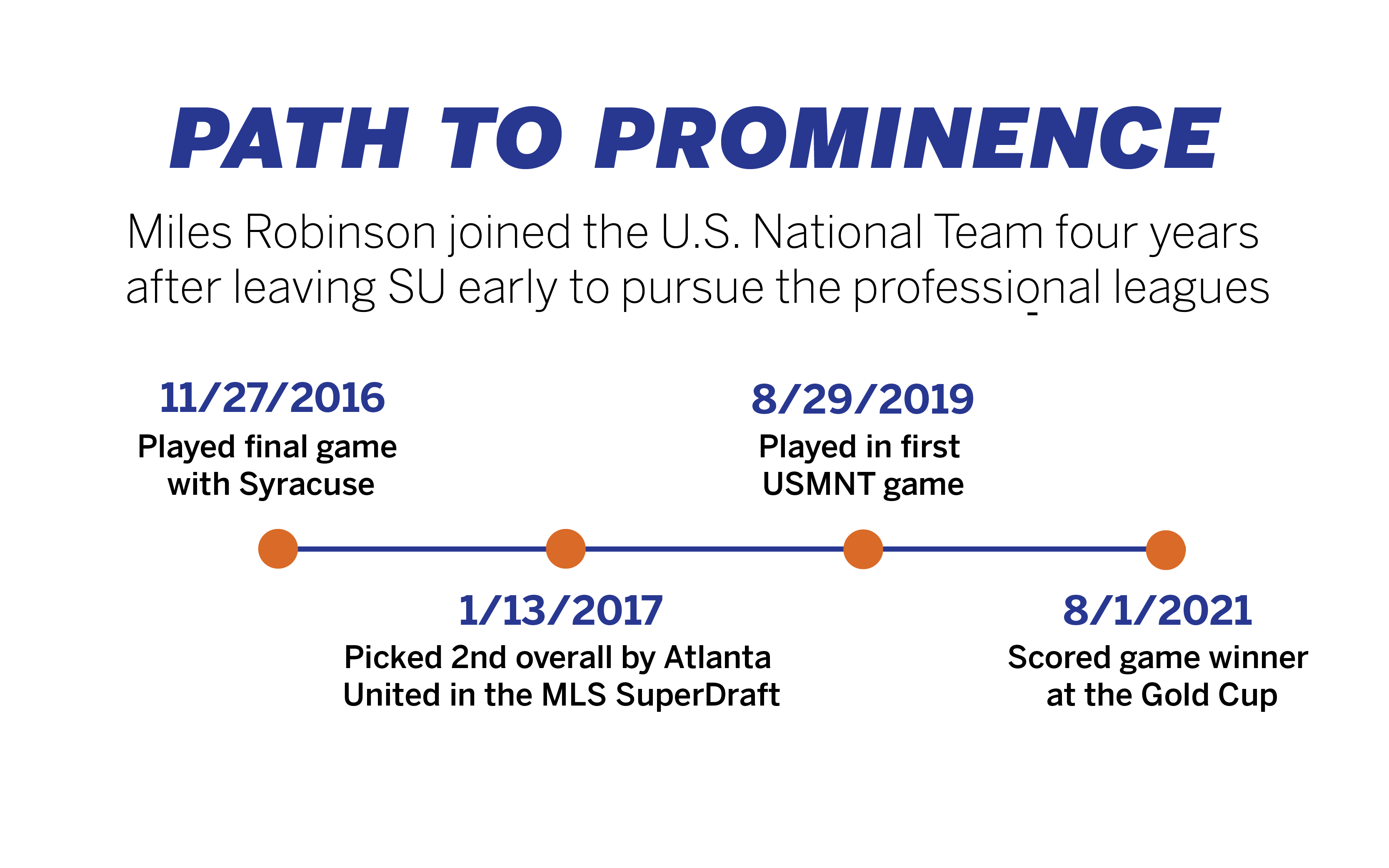 “When he’s matched up individually with players, you just can’t get away from him,” McIntyre said. “He’s gone from being a young, slightly inexperienced professional defender to now being an essential player around which you can build your defense.”

Now that Robinson’s assumed a full-time role at the top tier of American soccer, he looks to take things “day-by-day” towards the next step of his career, he said. In August, the national team called on him to play in its World Cup qualifying matches. He also recently played in the MLS All-Star game.

But minutes after the final whistle blew against Mexico, Robinson FaceTimed his sister Rebecca, the person who inspired him to play soccer as a kid. A 4-year-old Robinson rarely missed the chance to see his big sister play as he stood from the sidelines, juggling a soccer ball, unaware that he would be raising the Gold Cup trophy 20 years later.

“Watching him play and grow into the man that he is today is motivating,” Rebecca said. “I can’t think of anyone else more deserving than Miles.”

The post Miles Robinson’s journey from Syracuse to Gold Cup glory for US soccer team appeared first on The Daily Orange.