When Mikel Jones flew back home to Miami in March for the COVID-19 lockdown, he was disappointed. Though there were only three spring practices, Jones, a four-star recruit, missed out on first-team snaps during the spring, instead playing as Geoff Cantin-Arku’s middle linebacker backup.

In 2019, Jones appeared in every game, totaling a season-high 10 tackles in Syracuse’s final game against Wake Forest. His 38 total tackles led SU’s true freshmen — no one else had more than two. But defensive coordinator Tony White and the new defensive coaching staff weren’t impressed and Jones knew it.

“I knew the new coaches weren’t just gonna go off of last year. They wanted to see what I could actually do on the field,” Jones said.

2020 wasn’t quite a make-or-break year for Jones, but he needed to get on the field more frequently, he said. He wants to be a captain, something that’s hard to do from the sidelines. In the first two games, he’s taken command. Intercepting two passes and recovering a fumble as the Syracuse (0-2, 0-2 Atlantic Coast Conference) defense has made up for an unproductive offense, keeping the Orange in its first two games.

Jones is adamant that he’s a natural leader — his mother shared a post on Facebook after his first career interception in SU’s season-opener at UNC with the hashtag “#naturalbornleader”. He’s been ready since he was a freshman, Jones said, but he didn’t have the opportunities in 2019 and wasn’t a regular starter. Plus, he was 18 years old then.

“He has been different. He has made a move,” head coach Dino Babers said of Jones before the UNC game. “I would guess that Mikel did a fantastic job in those Zoom sessions, and it really gave him a head start so to speak once we got back to campus.”

If Syracuse stuck with its previous formation, Jones would’ve been the logical answer to step into a starting linebacker role. As a backup behind Kielan Whitner and Lakiem Williams, Jones was selected to the Pro Football Focus All-Freshman Third Team.

But White’s new 3-3-5 defense forced Jones to adjust from his favored middle-linebacker role. The weakside linebacker lines up on the side with the least amount of players, and in most formations, drops back in coverage. In a typical 4-3, the new position would’ve suited Jones’ athleticism, he said.

The 3-3-5 also requires linebackers to fill gaps, and it’s effective because coverages are mixed. That meant Jones had to add more muscle. He was 214 pounds and wanted to be 230. 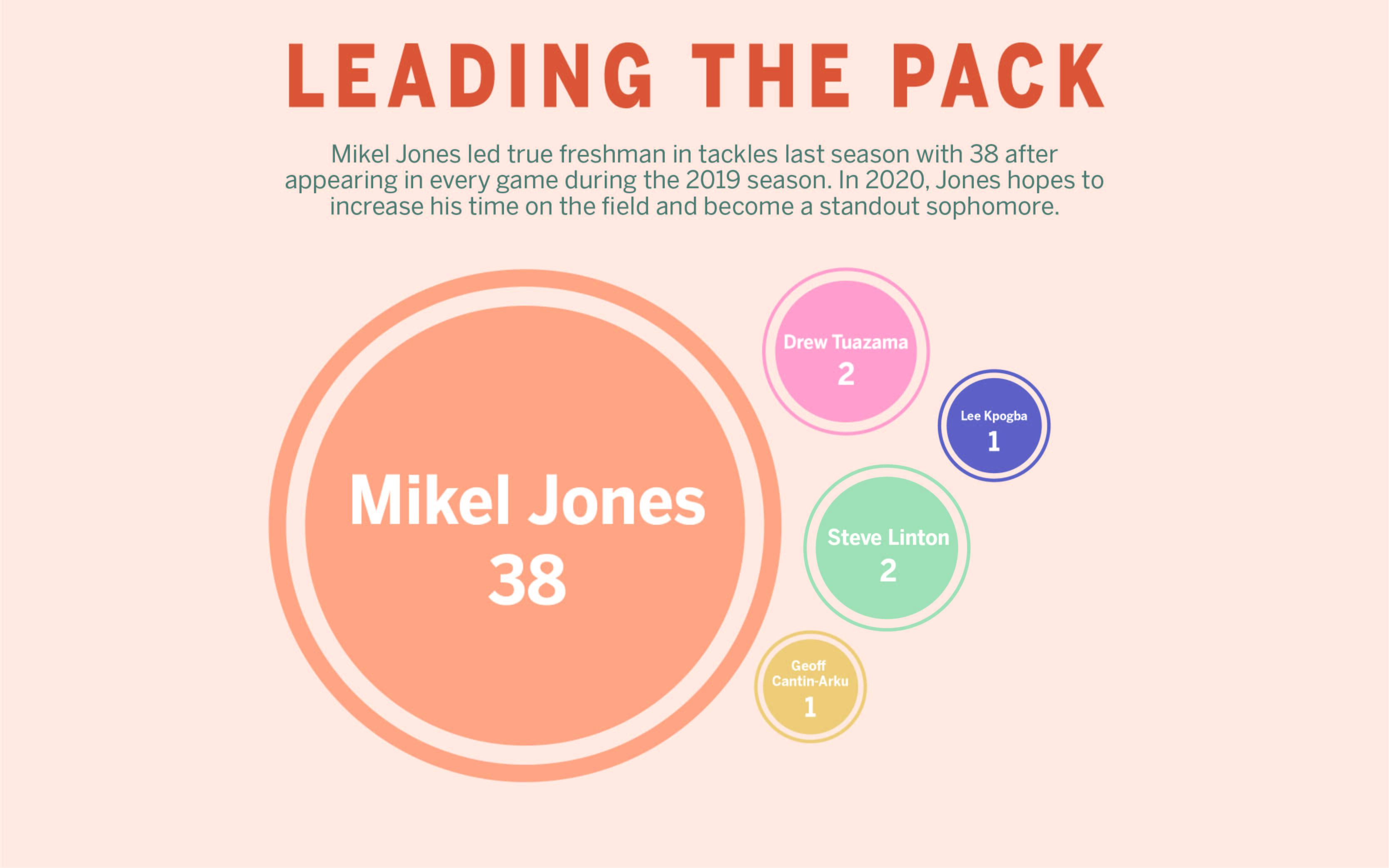 To do that, he ate more during meals — he ate anything he could find around his house. Without open gyms due to COVID-19, he also made his own training equipment, using old plates he found as weights and lifting in his backyard.

“That was one of the biggest things I wanted to do, because I’ve seen a lot of people talking about my size,” Jones said. “I knew that was something I could do and wanted to do, so I did it.”

Tommy DeVito said Jones is like the quarterback on defense. When someone makes a mistake, he tells them how to correct it. Babers said he’s been “very consistent” in practices this summer, leading to an increase in playing time.

Jones’ improvement was evident in the Orange’s first two games. Against UNC, Ifeatu Melifonwu smothered a Tar Heels receiver and the ball popped into the air. Jones understood where White wanted him to be, and he capitalized on the opportunity for his first interception, as Babers said.

In the second game, Jones said he recognized a swing pass right after the snap and sprinted into the backfield, shoving running back Vincent Davis to the turf after he dropped the backward pass. Jones jumped on the ball and handed the Orange a red zone opportunity. The Miami native had six tackles against the Tar Heels and five against the Panthers.

“For him to step into that role and take command of that defense by being vocal and physical definitely stood out to me,” DeVito said.

Jones’ growth has aided the drastic improvement of SU’s defense. Defensively, the Orange dominated UNC for three quarters, a team with a Heisman hopeful and multiple NFL-caliber skill players. They held a top-25 Pittsburgh team to 21 points. Babers has called the linebacking corps, including Jones, “NFL caliber,” largely due to a run defense that is vastly better than 2019’s.

After his second standout game, Jones sat in front of the monitor, speaking to the media over Zoom. He was asked about his last takeaway, the second of his career and his second in two games. For Jones, who went from a backup to a starting role this offseason, he’s happy to be staying on the field.

The post Mikel Jones was a backup in 2019. Now, he’s a catalyst for SU’s defense. appeared first on The Daily Orange.