Abby Casiano didn’t want to go to Syracuse. It was too cold. She wanted to be somewhere with “boiling hot weather.”

Casiano had committed to play Division II volleyball for Saint Leo University, a private liberal arts school located 40 minutes away from her hometown of Riverview, Florida. But coaching changes on the Lions’ staff caused Casiano to reopen her recruitment.

After decommitting from the Lions, she ended up at Syracuse, the exact opposite climate she imagined her college experience would be in. But despite the temperature, Casiano has emerged as a star with the Orange, leading the team blocks with 77 and 64 during her freshman and sophomore seasons, respectively. She’s recorded 60 blocks so far this season, the most from a player at SU. In high school, Casiano was a two-time honoree on the Tampa Bay Times’ all-Tampa Bay volleyball team, and she also recorded 949 digs, 239 blocks and a 45.6% hitting percentage with the Tampa Bay HEAT.

Out of high school, Casiano committed to the Saint Leo program after developing a strong connection with two of the coaches there, including her club coach, Carlos Ramos. But a violation of the NCAA’s ethical conduct rules by a former head coach at the school resulted in the termination of some employees, including Ramos.

“The main reason I was going there was for those coaches,” Casiano said. “I had made a great relationship, and I was really excited to play for them.”

After decommitting, Casiano said Ramos helped connect her with other coaches. He reached out to his friends and acquaintances in the coaching world, including Syracuse head coach Leonid Yelin. In a phone call, Yelin said Ramos described Casiano’s personality as a player and person, and soon, he became very interested in her potential.

At the time, Yelin said Syracuse was in the stage of the recruitment process where the coaches reach out to club coaches to see if any teams had any prospects for collegiate volleyball as well as finding certain positions. Syracuse was searching for a middle blocker and Ramos “highly recommended” Casiano, Yelin said. 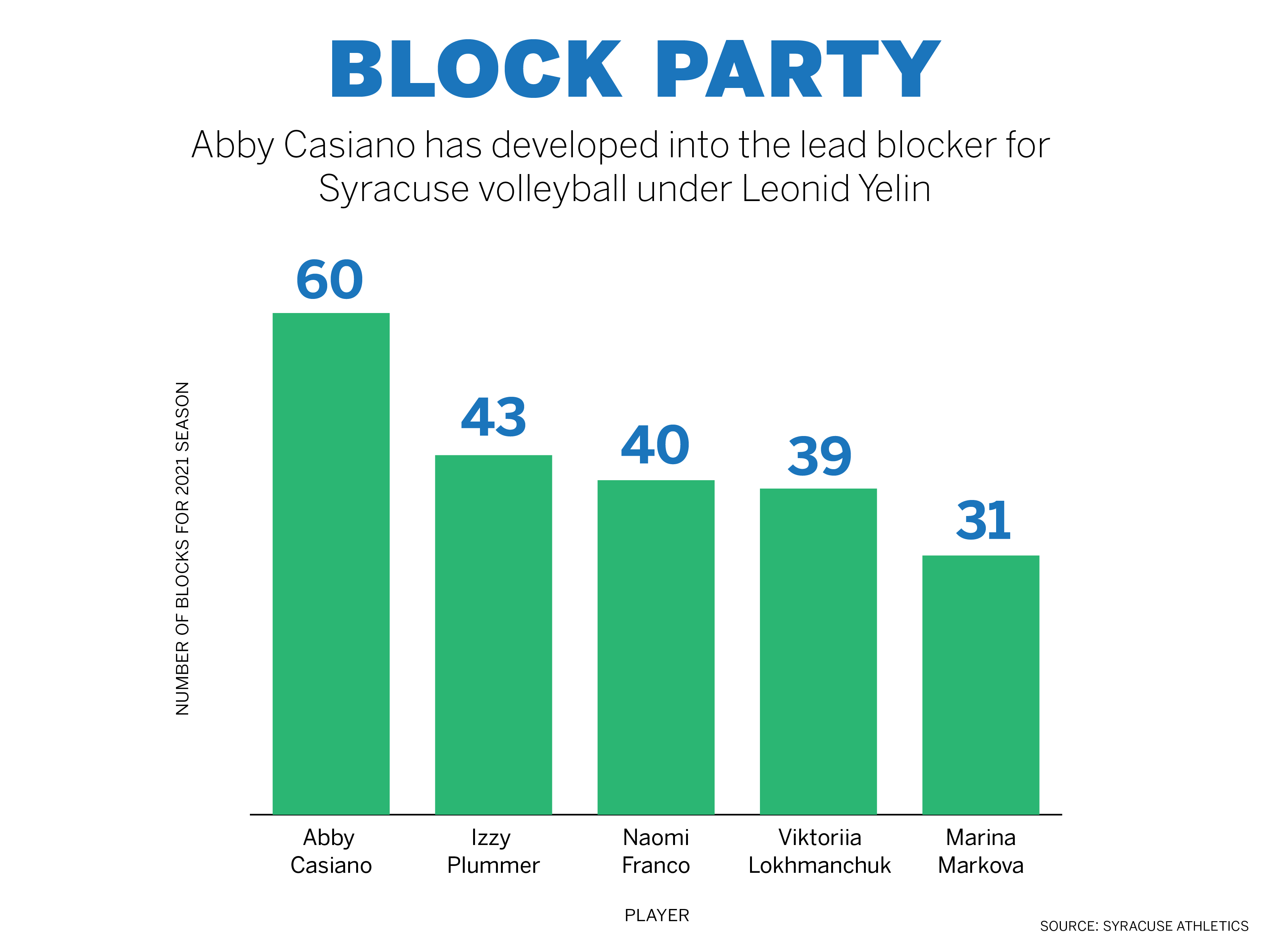 Yelin consistently contacted Casiano, she said, spamming her with text messages and phone calls. She was reluctant to even answer him because she was very adamant on not playing or living in New York because of the weather.

Despite her reluctance, Casiano said Ramos advised her to give Yelin the courtesy of at least responding and speaking with him without committing to anything.

Casiano said she became more optimistic about the possibility of playing for the Orange since the conversation was heading in a good direction during her first phone call with Yelin. Then, moments later, Yelin shocked Casiano by saying he was flying to Tampa, Florida, to meet her in person.

Yelin traveled right in the middle of the week prior to SU’s opening NCAA tournament match against Yale. Casiano said she was stunned that he would travel and miss some practices during one of the most important weeks in program history to visit her. 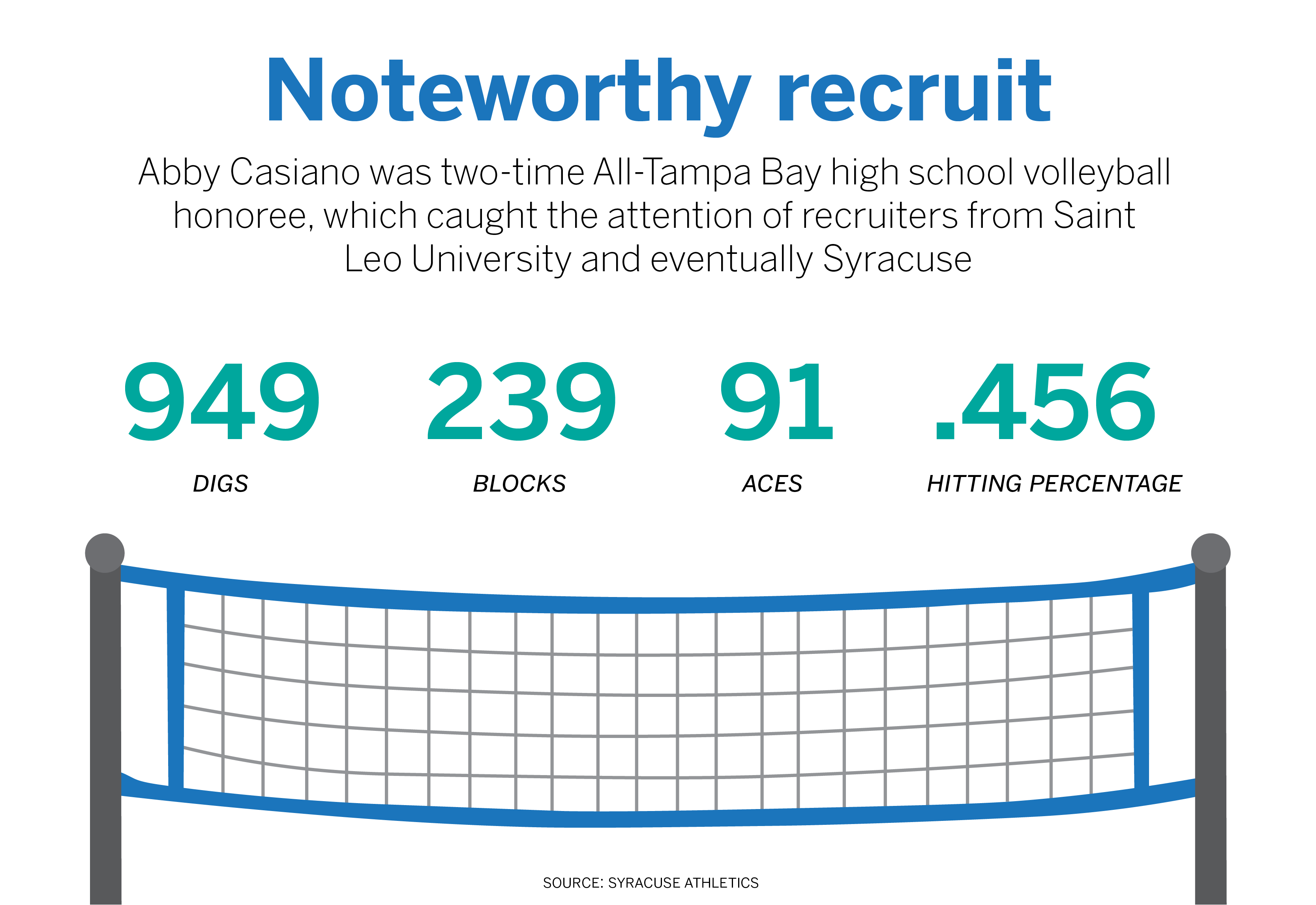 During his brief visit, Casiano and Yelin met for lunch at a local Longhorn Steakhouse in Tampa, Florida, where Yelin offered Casiano a scholarship to play for the Orange. She accepted, committing to the school she had no prior intent of joining and to a coach who had never seen her play.

“I was freaking out, I was very nervous, the fact that he’d never seen me play and he was so persistent,” Casiano said.

Yelin said that Casiano’s recruitment was unusual, considering the fact that he had never seen her play live. Because it was late in the recruitment process and Yelin didn’t have the time to scout her in-person since SU was in the middle of its season and preparing for the NCAA Tournament, Yelin made a judgement call based on what he knew about her.

“Usually, I am not doing this,” Yelin said of Casiano’s recruitment. “I felt like taking (a) risk at that time.”

“We can see how passionate she is about volleyball and how hard she wants to be better.”

Casiano said she still doesn’t really know why Yelin wanted her on the team. Yelin’s constant communication and his visit to her hometown demonstrated his seriousness about her coming to play for Syracuse, and that convinced her to commit.