Head coach Gary Gait isn’t happy with Syracuse’s 4-10 season, but he’s “extremely confident” in where the program is going, he said before SU’s second-to-last game. Syracuse had 20 fourth, fifth and sixth-year players this year who committed to help lay the “foundation” by helping younger players get crucial experience to prepare for what’s ahead.

True freshman Matteo Corsi is a key piece of that foundation, those close to him and Syracuse’s program said. The Plymouth, Michigan native started playing lacrosse near home, before moving to The Hill Academy in Ontario, Canada, and then to IMG Academy in Bradenton, Florida, where he flipped his commitment from Lehigh to Syracuse. Corsi has taken “a little something” from each of those different lacrosse experiences, his dad, John Corsi, said.

That journey prepared him to fill a significant role as a true freshman for the Orange’s injury-plagued midfield this season. He played in 12 of 14 games, scored five goals, recorded two assists and earned his first career start against Notre Dame in April. And it prepared him for a possible starting role on Syracuse’s offense next season.

“He’s definitely going to be an instrumental part (of Syracuse’s future),” said Tom Marechek, the director of lacrosse at IMG Academy and a former SU star.

Amid all the moves, John said the biggest growth in Corsi’s game came in their backyard. There, the then-150-pound high school lacrosse player worked on dodging against his 220-pound father.

Since fifth grade, he has worked regularly with Nick Diegel too, his trainer and a close friend of the family. Diegel, who played at Ohio State and then professionally, laughed about how training a player as talented as Corsi helped build his clientele as a club coach. Corsi was a “rockstar”, and parents of other players asked John about who Corsi’s trainer was so they could send their kids to Diegel too.

Corsi watched videos of his favorite players dodging and replicated their techniques. He added a plethora of moves to his toolbox and focused on keeping his head up while dodging, John said. But footwork was the “foundation” of Corsi and Diegel’s training — Corsi broke down film with Diegel and reenacted plays in slow motion until he was ready to speed it up. 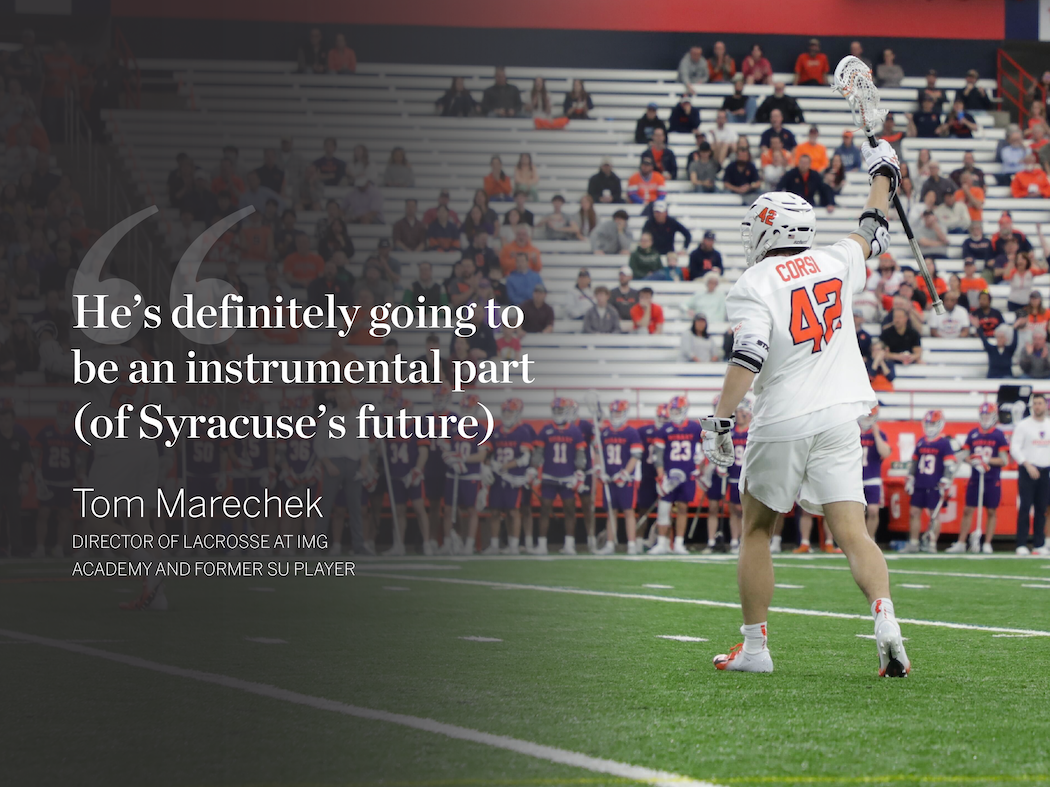 That helped Corsi develop a “lateral dodge” that not many players use. It forces the defense to stand still while he makes his quick, side to side “signature” motion, Marechek said. Against Stony Brook this year, John cited a play where Corsi dodged so abruptly that his man fell over and came up limping with a sprained ankle.

“You can tell he’s practiced his stuff on his own. Through his training of these movements, it looks fluid; it looks impressive; it looks slick,” said Spencer Wright, Corsi’s IMG coach.

From early on, Corsi played with kids a year older than him because his skill set was so advanced. He made Detroit Catholic Central (Michigan) High School’s team as a freshman. The team was talented, but after a few years, Corsi and the family said there was a limit on how far he could be pushed since Michigan isn’t a lacrosse hotbed.

“The path from Michigan was hard,” John said. “It’s not like he could just go to Calvert Hall (Maryland), or these schools. We had to find these fits.”

So Corsi moved from Catholic Central to The Hill Academy, part of his plan to play on the best teams possible to further his development. He tried out for Junior A box lacrosse, the highest level of box lacrosse below the pros. John said now he thinks Corsi was the only 16-year-old American to ever play at the Junior A level.

Box lacrosse helped him improve his speed of play and learn to set pick-plays better, Wright said. It forced him to work on his skill set too, since he was always a smaller, younger player who couldn’t “blow his way through to score a bunch of goals,” John said. 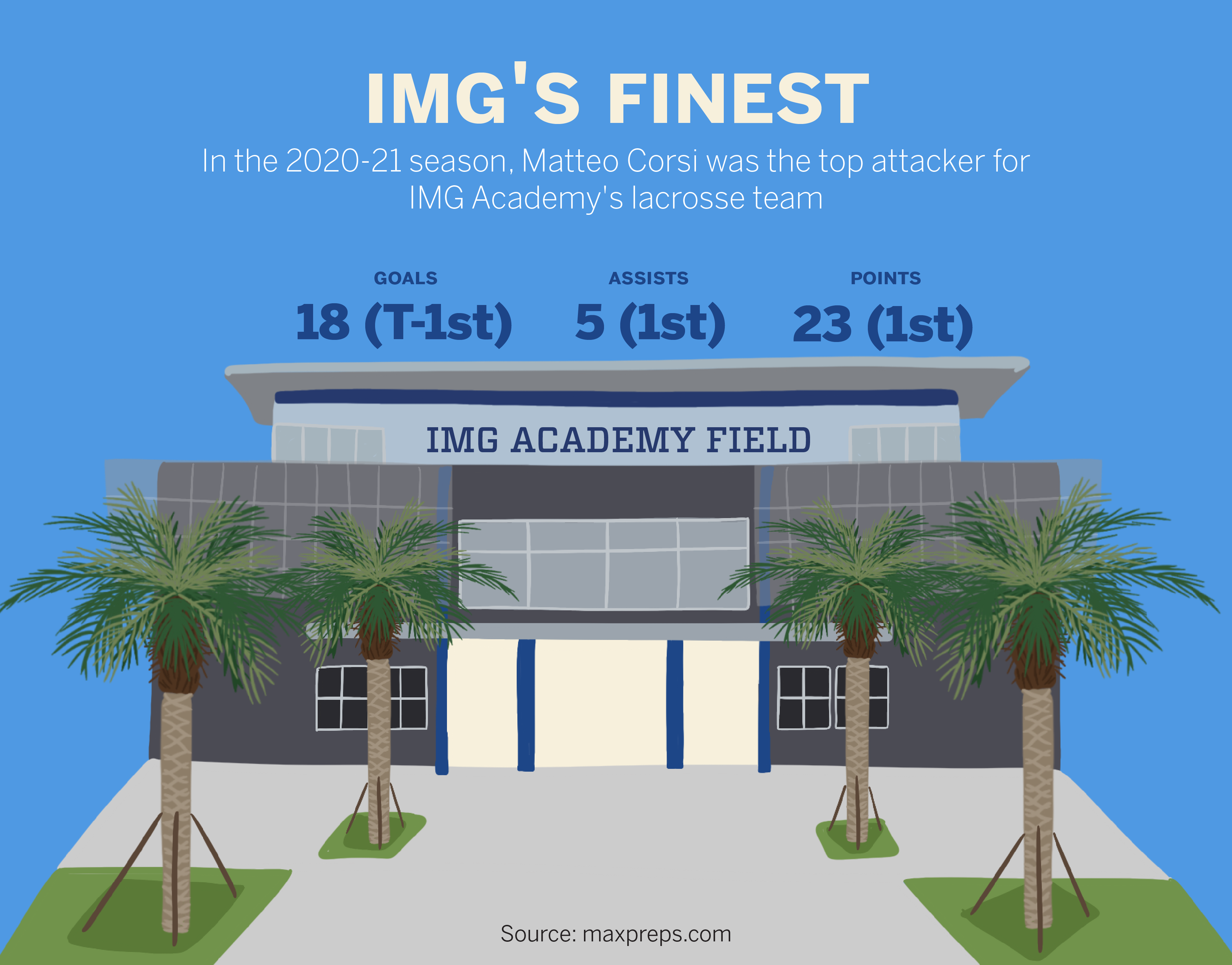 Then, before Corsi’s senior year of high school, Marechek came across Corsi’s highlight reel. “Kind of reminded me of myself,” said Marechek, a four-time All-American at Syracuse and Hall of Famer. Marechek wore No. 42 from 1989-92, the same number Corsi wears now.

Marechek remembered a play from the highlights where Corsi took the ball from X to the top of the wing and threw a “beautiful” behind-the-back pass to a streaking midfielder who scored. Behind-the-back passes while moving your feet are very difficult, Marechek said, and immediately he knew that Corsi would make a very talented attack.

But as much work as Corsi put in, he had significant natural talent. Wright cited the handful of times that Corsi used a martial arts-esque kip-up to spring back onto his feet when he fell down.

“It’s just something like, ‘Oh, he’s got some Bruce Lee in him,’” Wright said. “He is a dynamic athlete.”

Now, Corsi isn’t surprised he saw such a significant role as a true freshman. He’s using that combination of natural athleticism with the stick skills, footwork and dodges that he’s spent years developing.

“His journey ended up being really, really interesting,” John said. “To this day, he wants more. He still wants more, not just for himself, but for his team.”

The post Matteo Corsi emerges as key component in foundation for Syracuse’s future appeared first on The Daily Orange.