April Kater had spent 457 days molding a program from scratch, so the then-Syracuse University women’s soccer head coach plopped on a sideline bench to watch it all come together. It was Aug. 31, 1996, shortly after 3:30 p.m, and SU was competing in the first game of its inaugural season against the University at Buffalo.

While the head coach scanned the field, her players’ white jerseys glimmered in the afternoon sunlight. Just months prior, Kater was on the recruiting trail with her assistant coach Maren Rojas, pitching to prospects, attending tournaments and handwriting letters for a program that didn’t exist.

The two constructed the foundation for Syracuse women’s soccer, a program created because of Title IX, the federal law that bans sex-based discrimation in any education program. With a collective of transfers, freshmen and club players, the team ended with a 10-6-1 record in its inaugural season. After being built on the legacy of that 1996 team, the Syracuse women’s soccer program enters its 25th campaign this year, hoping to improve on last season’s 1-7 record.

Through a year and a half of preparation, from recruiting to preseason, Kater attracted prospects as far as Oklahoma, maintaining an animated presence during practice. But during games, the head coach was the opposite, normally sitting stoically on the sidelines.

In the 23rd minute of the Orange’s first game, though, Kater rose up. Forward Jaime Mingoia Vollmer rifled an 18-yard shot at the net. Buffalo’s goalkeeper Joanne Chillingsworth bobbled the ball in her mitts, letting it roll between her legs and past the post — Syracuse’s first goal.

Vollmer and her teammates beelined toward SU Soccer Stadium’s new bleachers. As a pre-planned celebration, they slid on the grass and laid down, white and blue diamond Adidas uniforms all stretched out in a row. Syracuse went on to score four more goals and win 5-2. 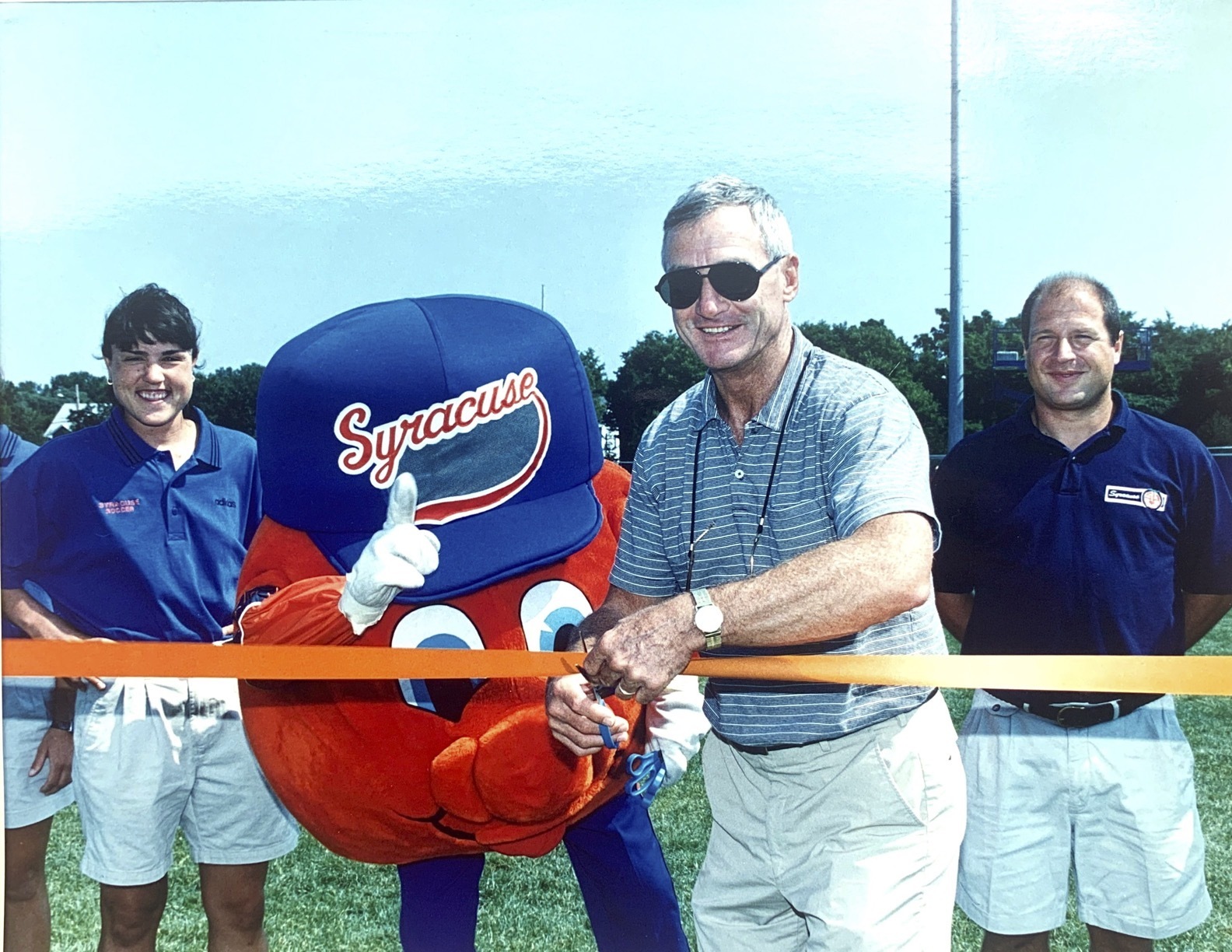 “(That goal) was the definition of our season,” Kater said. “Blue collar work ethic, outwork our opponent and have some fun doing it.”

Kater knew the gravity of her situation trying to create a program from the ground up. She was 26 years old, 5 years removed from winning the Hermann Trophy and becoming the head coach for a fresh Division-I soccer program. SU Athletics wanted her to arrive later in the summer, but Kater moved her start date up to June 1, 1995 since she wanted to start recruiting as early as possible.

Days after arriving in Syracuse, Kater ventured into a Marshall Street apparel shop, handed over a credit card and bought a polo emblazoned with a Syracuse logo. At recruiting events, other college reps and players started to notice a blip of orange and blue in the stands.

“I think her shoelaces were Syracuse. She was head to toe orange and blue. It was unbelievable,” said Rojas, who worked at James Madison University before joining Syracuse in January 1996. “She was a walking billboard.”

While opposing coaches played their seasons during the fall, Kater went into prospects’ living rooms across the Northeast. After cracking a suitcase open to show off SU through photos and VHS tapes, the head coach made her pitch: how they had the chance to pave a legacy, the chance to be the first.

Kater corresponded with players, too. They sent letters back and forth before, but when Erika Hadjoglou Palmer, who played from 1996-99, tore her ACL during a tournament her high school senior year, she received another letter from Kater. “We hope your knee heals. Keep us posted,” Palmer recalled it saying.

This comfort made Palmer go on an official visit at Syracuse, she said. During official visits with prospects, Kater and later Rojas looped groups of players around Manley Field House and its facilities, walked outside and pointed out the construction plot that would be SU Soccer Stadium. 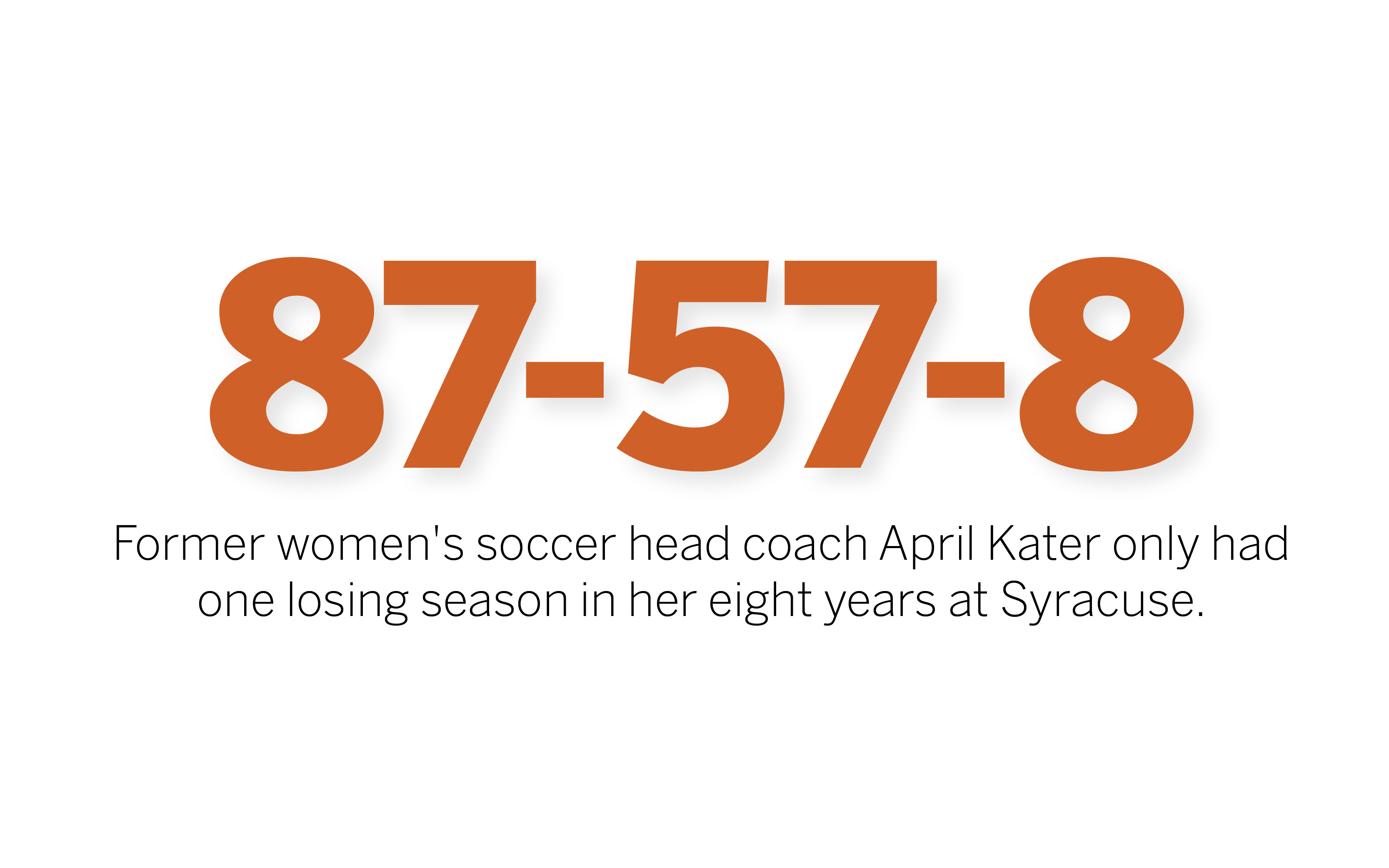 By summer 1996, Syracuse assembled a team of 19 players. In the mail, each recruit received a manila envelope with a packet detailed with fitness, weight and soccer exercises to complete over the summer.

“It is important that you do not ignore any particular part of this training,” one section read. “Preseason will seem much longer, demanding and unenjoyable if you do not prepare yourself now.”

Months later at preseason, some players gasped for air during lap-aheads, a fitness drill where Rojas would take off and circle around the field while players would chase after her. Midfielder Jenna Szyluk zipped in front of the pack while others such as goalie Riley Wogamon Smit lagged behind. The entire team needed to touch Rojas to complete the drill.

Besides lap-aheads, players would also run 10x120s and sprinting drills called “cone monsters.” Running was a cornerstone of Kater’s mindset: If her team couldn’t beat an opponent by skill, they would outrun them.

Sure enough, after winning against Buffalo, the Orange won their first six games in a row through nonconference play. Beyond practices, where they had Mondays off, freshmen players spent time together through team meals and on the Mount. Players filed in and out for meetings in Kater and Rojas’ offices, which sat across from each other at Manley. The team built chemistry, and at the start of October, Syracuse had posted a 8-0-1 record.

Soon, though, on Oct. 3, 1996, the team’s streak finished with a loss to St. Bonaventure. Three days later, they were shut out by Colgate, then by Villanova and Vermont — “heavy hitters,” the former head coach said. Kater recalled players being burnt out, something she felt that was bound to occur as midterm season approached.

Syracuse split its games toward the end of the season. For their last game, the Orange faced West Point’s Holly Pedley, one of the best players in the country at the time, Kater said. Syracuse led in the first 45 minutes. But after halftime, Pedley went on a scoring rampage. With each goal scored, Army players jumped to the ground and completed pushups. West Point eventually won 5-3, and the loss cemented Syracuse’s record at 10-6-1.

They weren’t just part of building a new program — they were part of the Title IX movement.

Postgame, Kater told her team that the program could only grow. She understood that her team was still building an identity, that it was about maintaining the team’s standards of fitness and hard work. Stacy Shanning Boccabella, who played from 1996-98, recalled her head coach would bring up “The Army Game” in coming seasons as motivation.

The next year, Syracuse went 14-5 in its first season in the Big East.

“Maren and I were pretty hardcore those first couple seasons because we didn’t have room for error,” Kater said. “Being that hardcore translated to the demands we put on the players, and they didn’t realize they were part of that legacy. They weren’t just part of building a new program — they were part of the Title IX movement.”

When Boccabella read aloud “Who Was Ruth Bader Ginsburg?” to her fourth graders during Women’s History Month this year, the Porter-Gaud School (South Carolina) teacher brought up her own experience on the topic of Title IX. After thumbing through the section about the law and sports, Boccabella pulled up pictures of her and her former teammates wearing puffy Syracuse uniforms on the classroom Smartboard.

“I was a part of the first women’s soccer team at Syracuse,” Boccabella told her class.

“Your uniforms were so big,” one student called out.

“Look at your hair,” another said.

Like Boccabella, the majority of former players are hundreds of miles away from Syracuse, along with being decades removed from the school. Now they have jobs, kids and last names that don’t match the ones on scorecards from their playing days. But outside of soccer, Kater and Rojas’ “sixth sense” made them keep in touch, players said.

There’s a group chat, one which buzzed while the US women’s soccer team played during this year’s Olympics. And although COVID-19 has limited it, almost every year, a handful of them carve out a weekend to meet up. It’s where memories of that 1996 season and other old times flood back, players said.

“April and Maren really made it a family for us,” Palmer said. “I wouldn’t trade it for the world.”

The post Looking back at the creation of Syracuse women’s soccer, 25 years later appeared first on The Daily Orange.